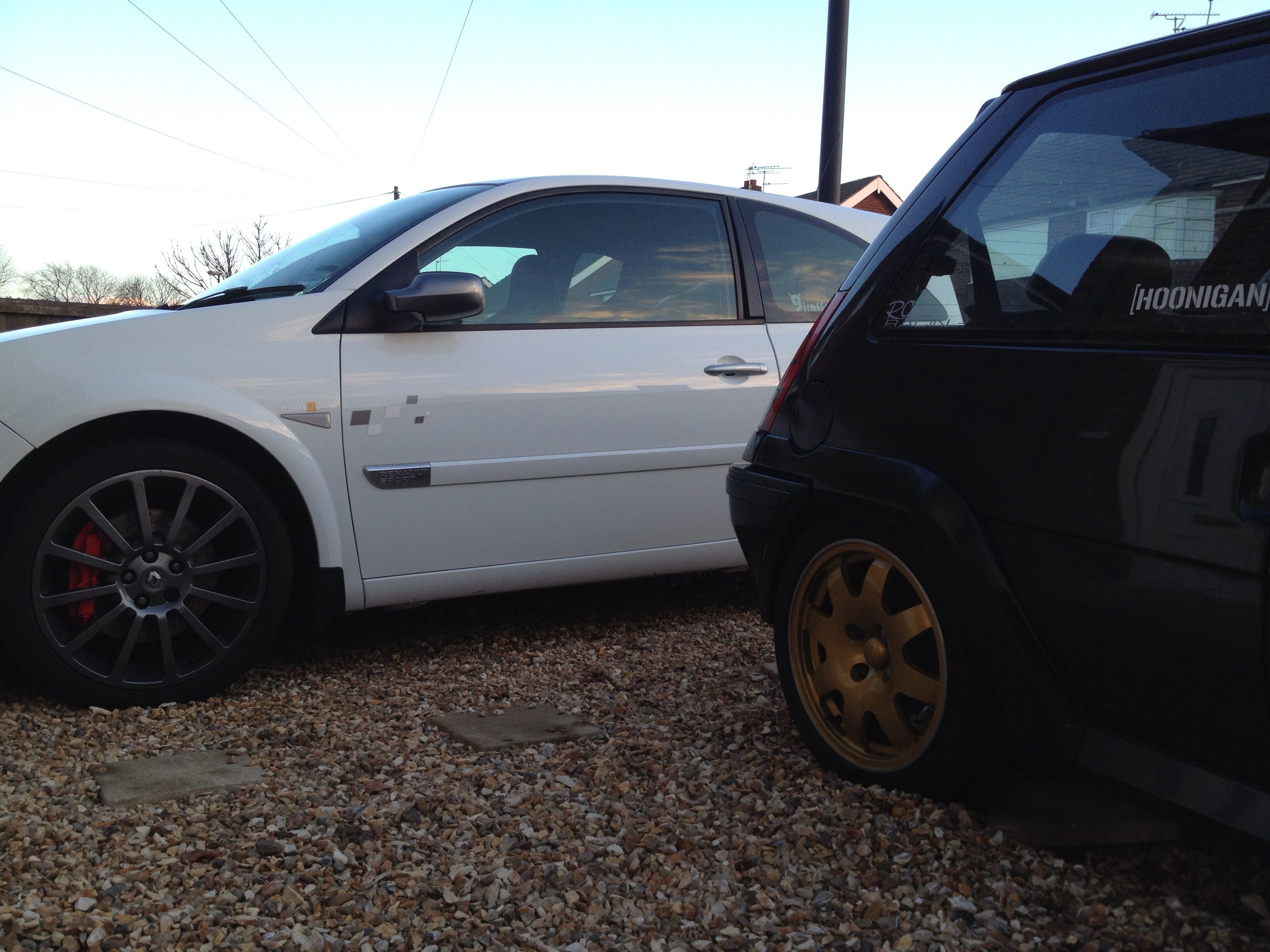 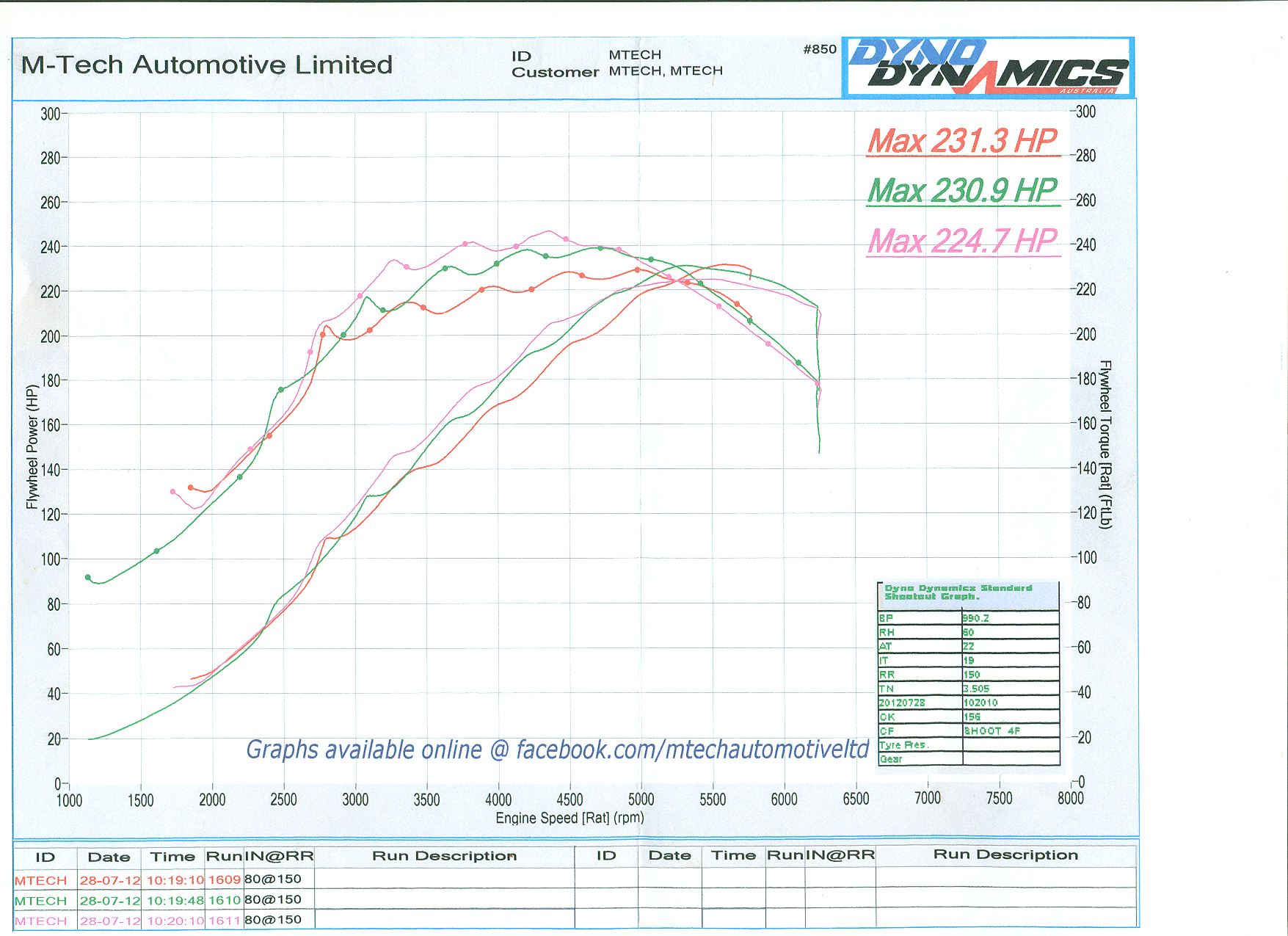 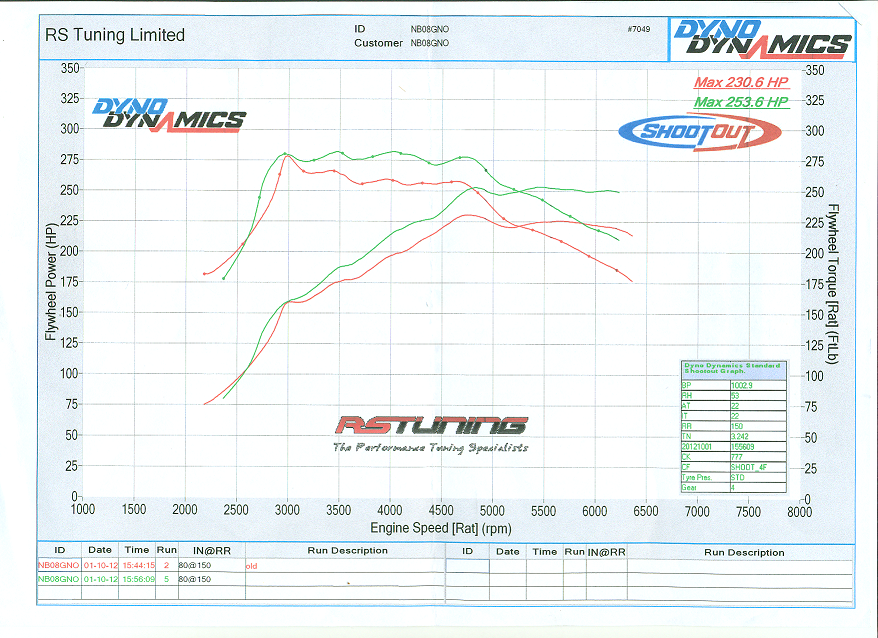 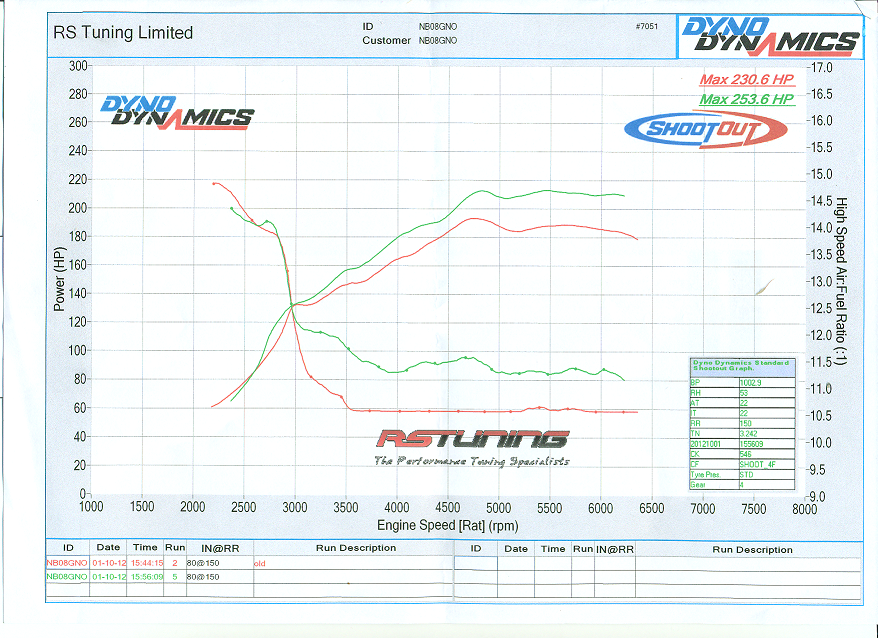 I didnt think I would ever want more power. I was wrong

an intercooler was aquired and fitted, plus a map tweak … 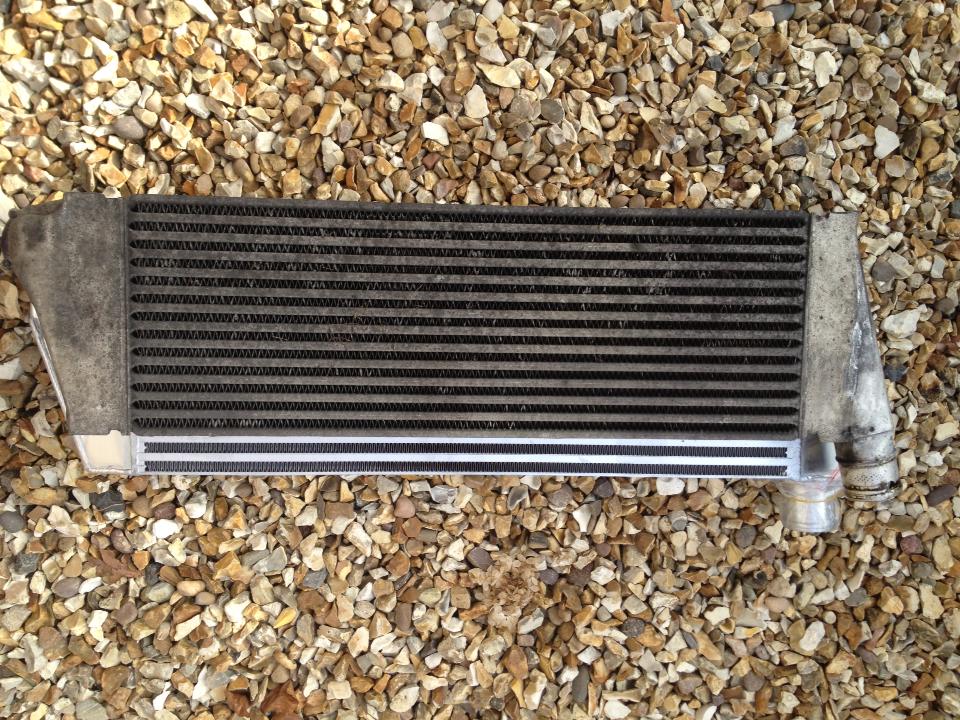 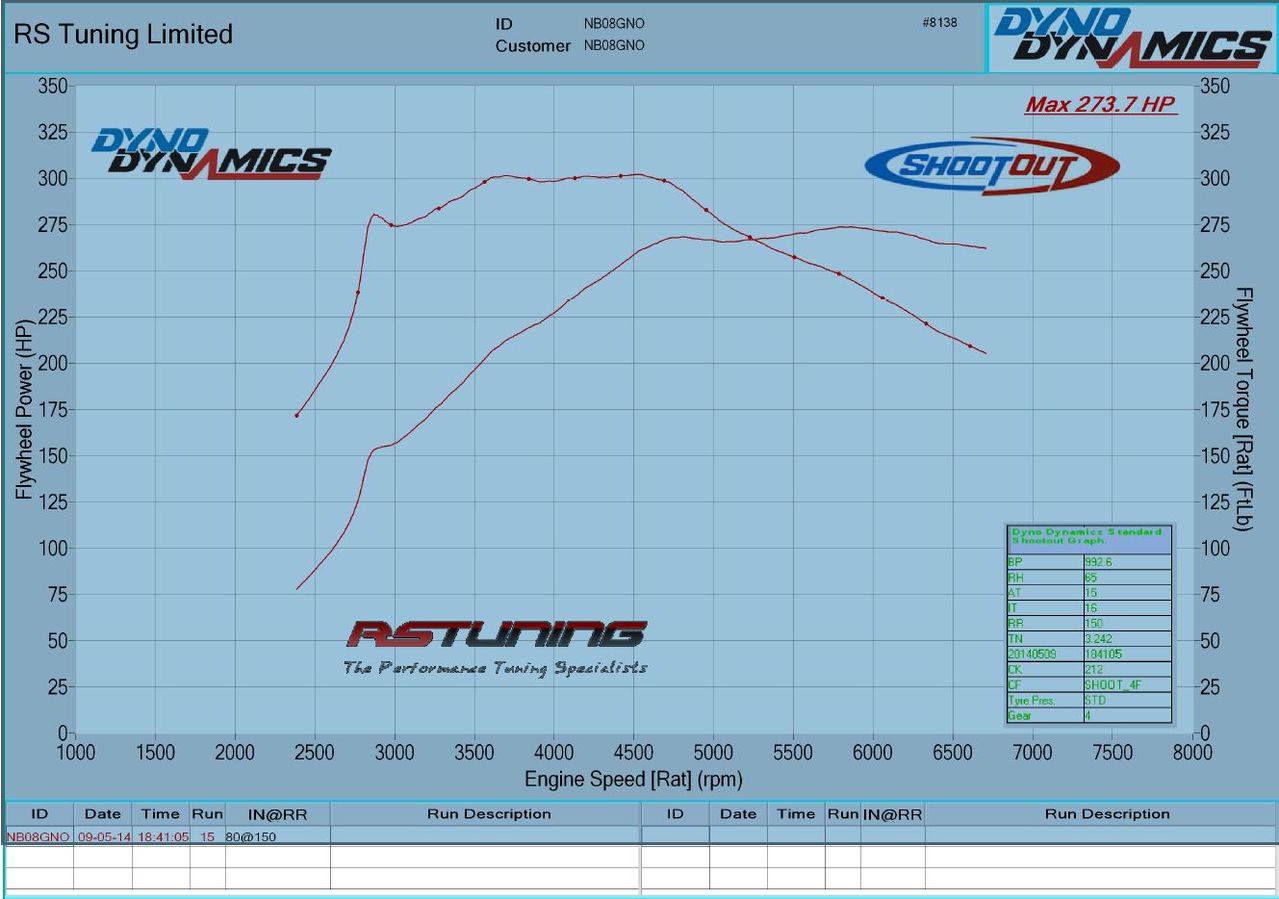 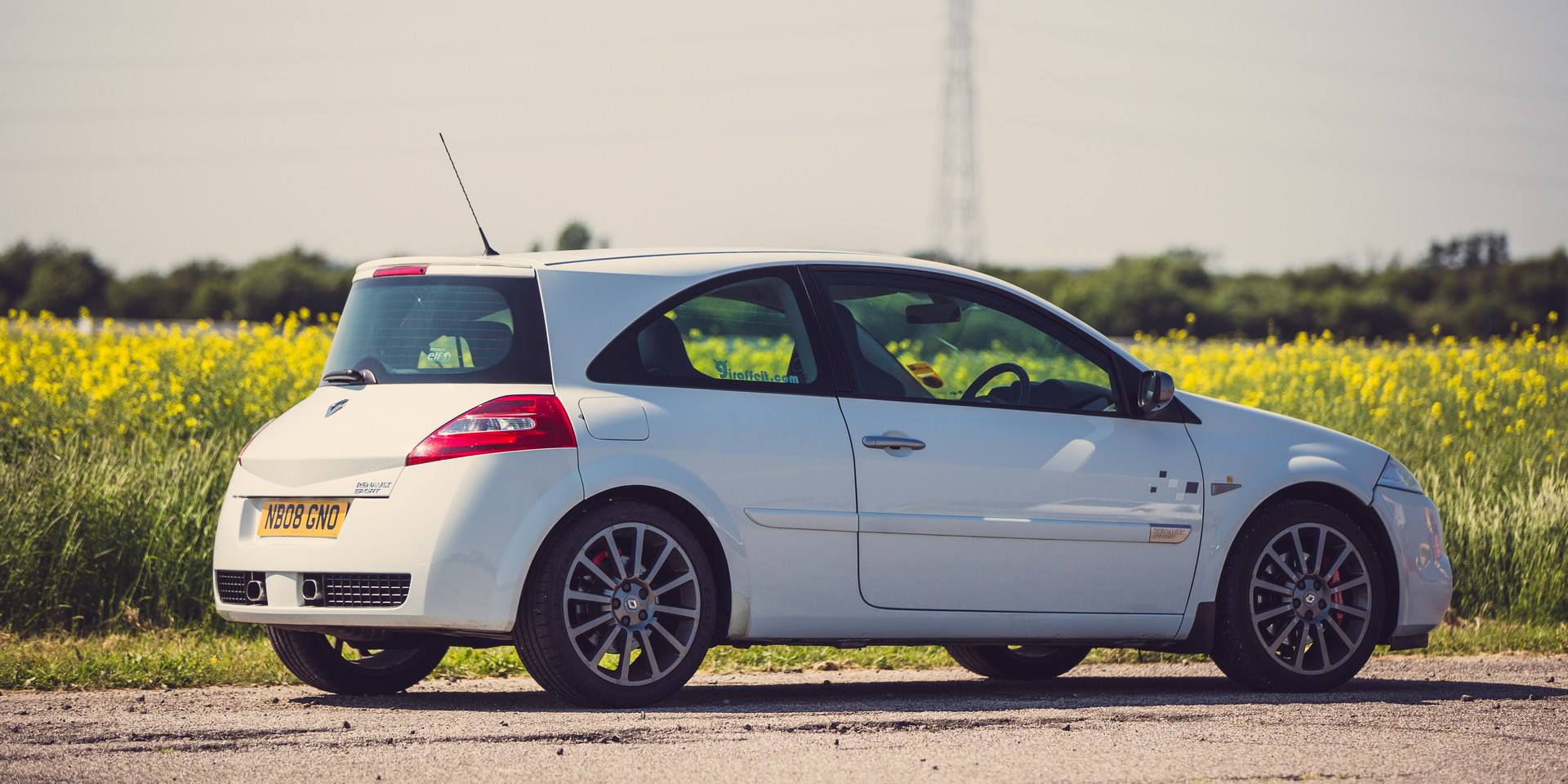 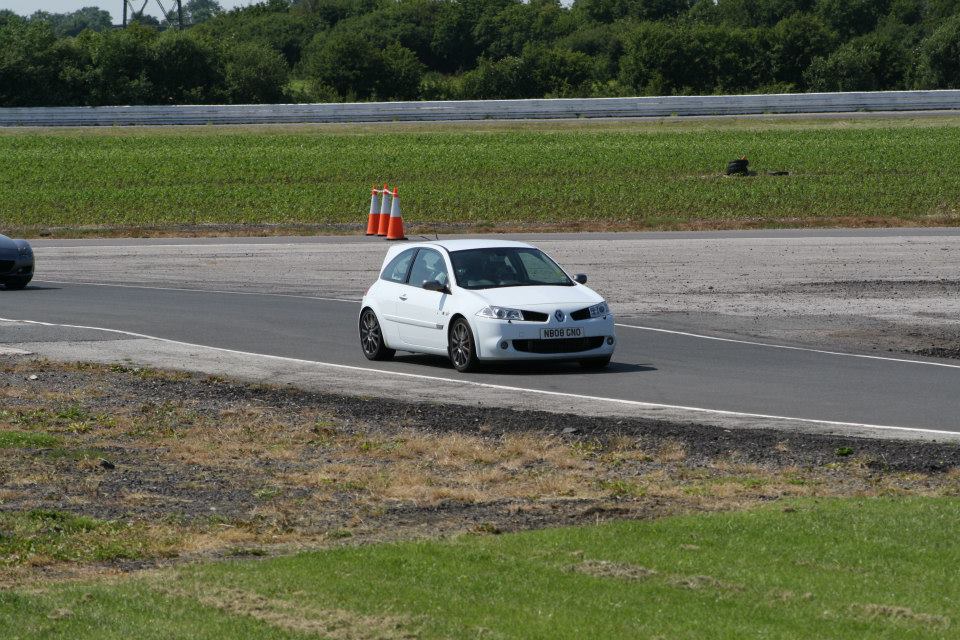 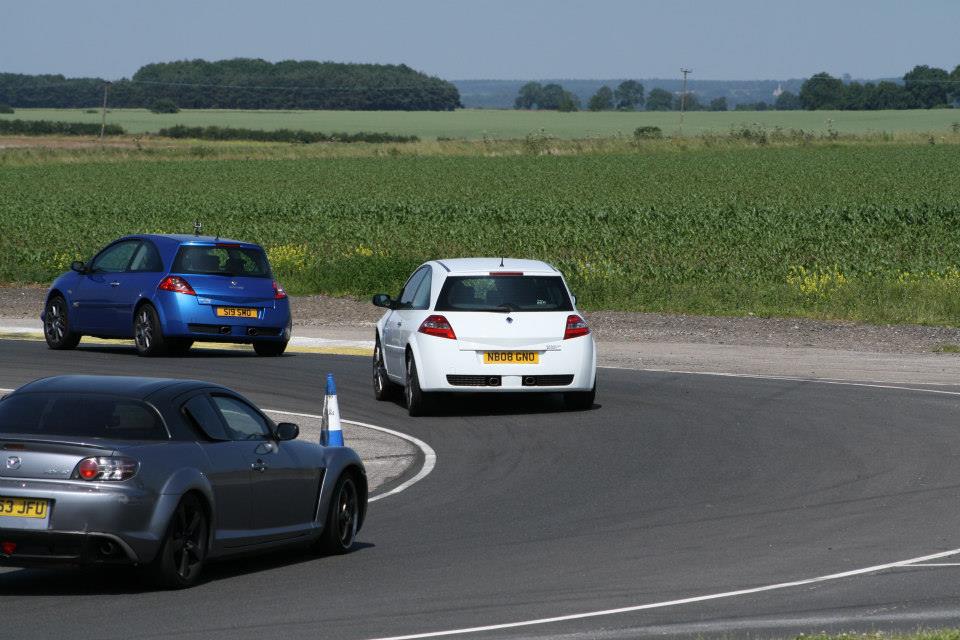 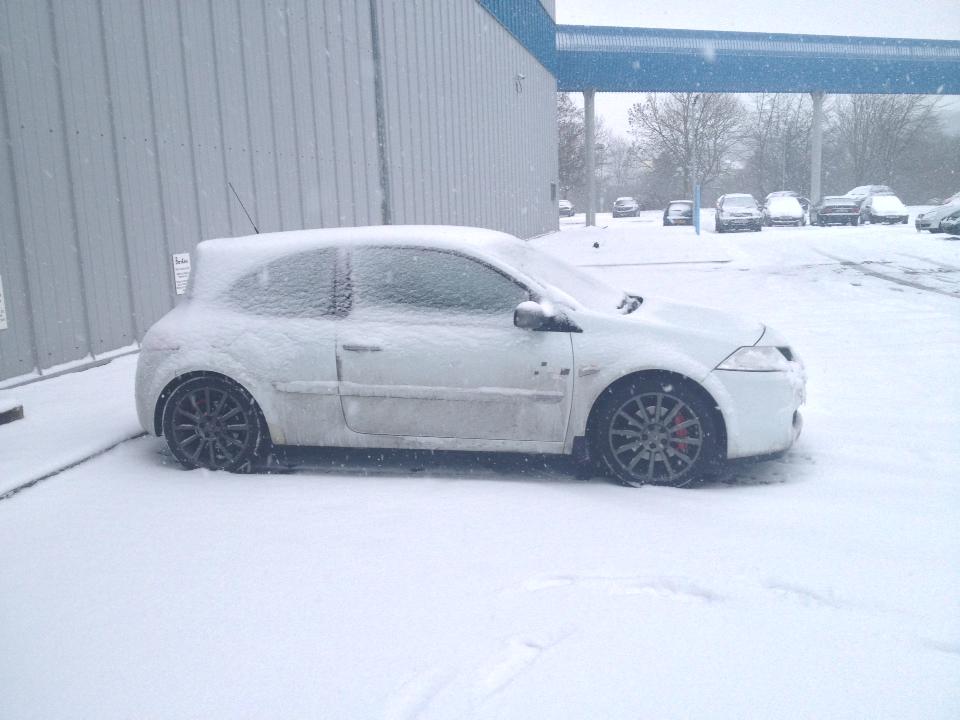 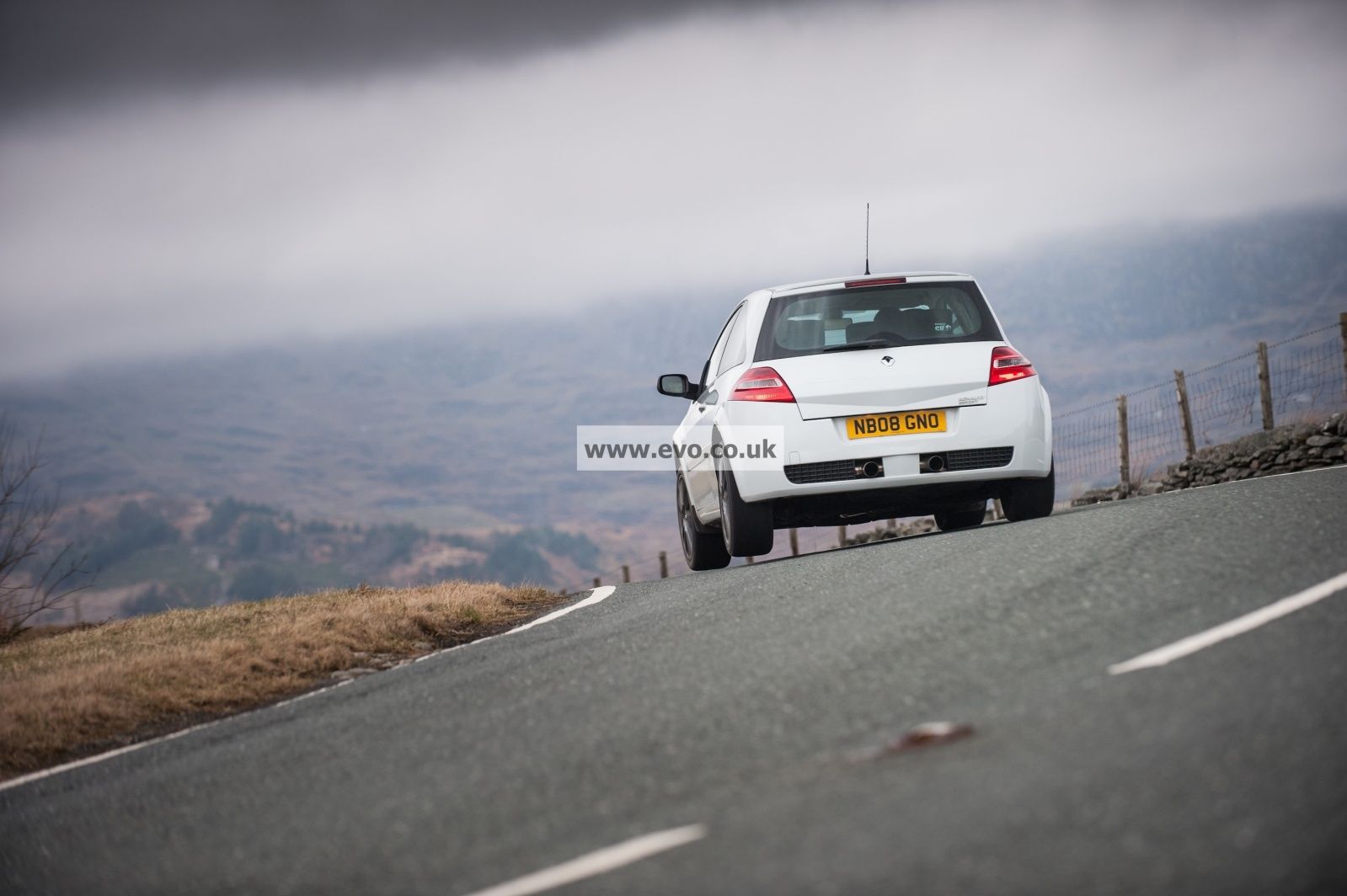 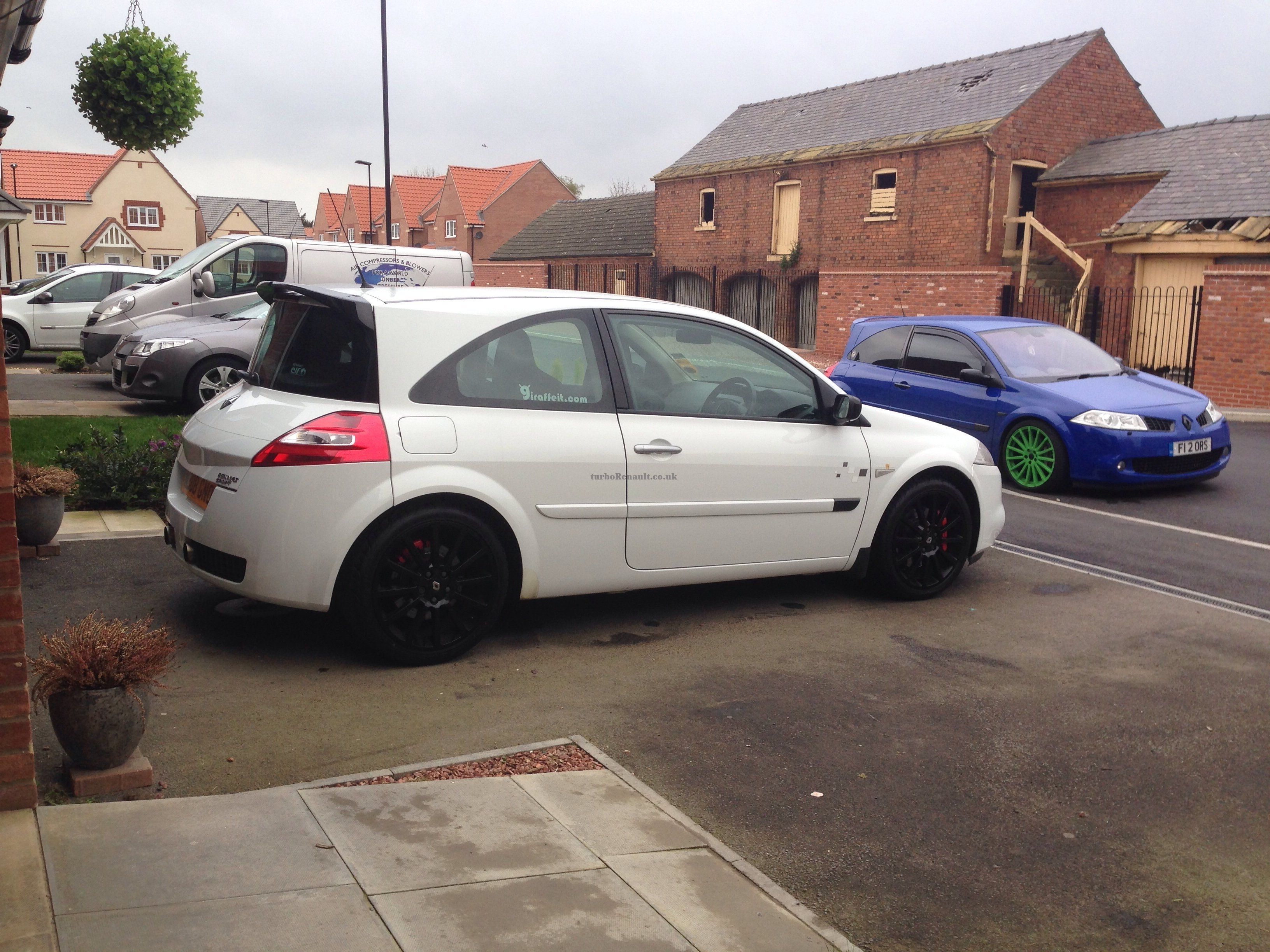 Also left a faceprint on the windscreen.

Any guesses for power ? Already running 285bhp and 310ibft. 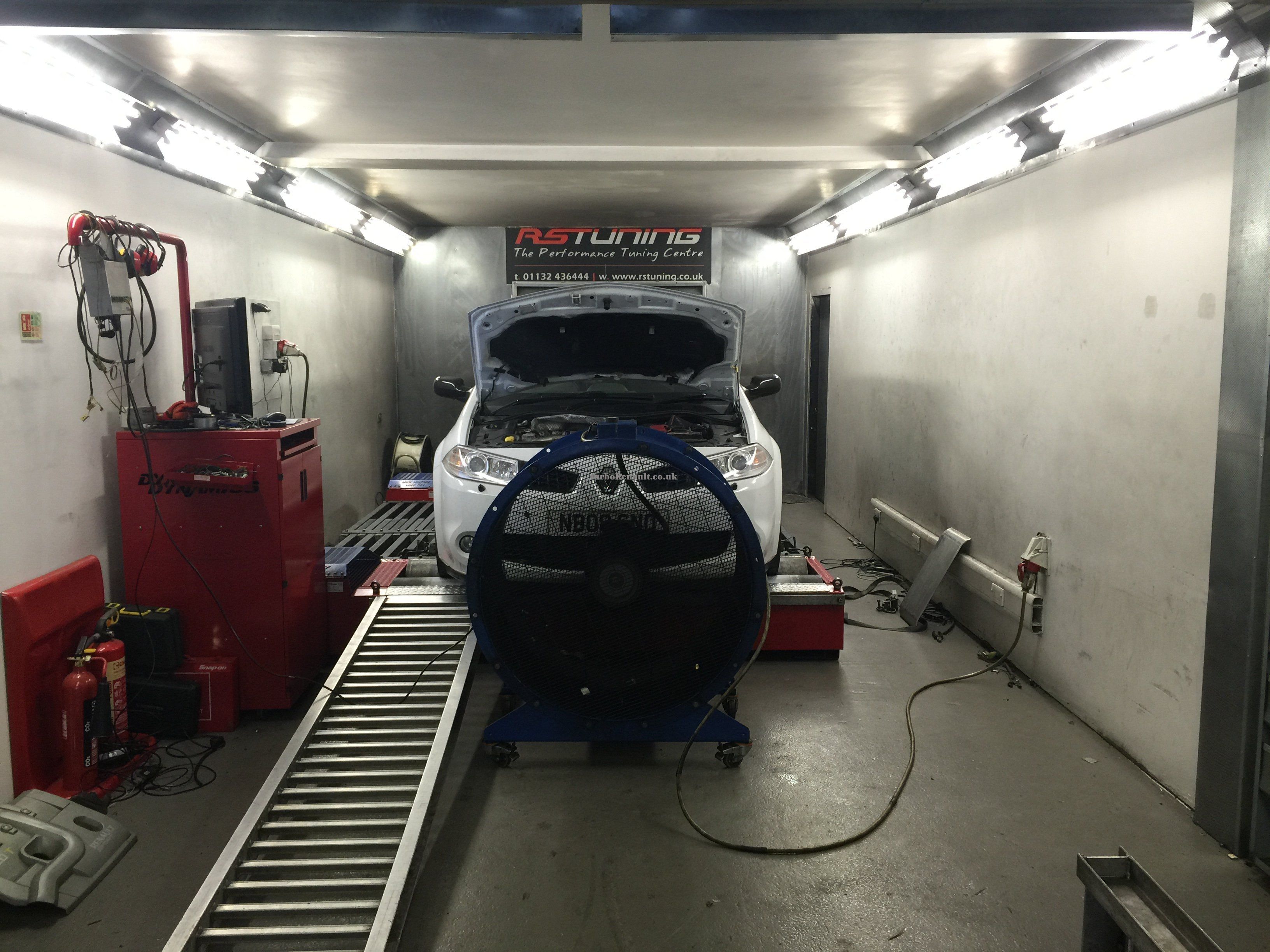 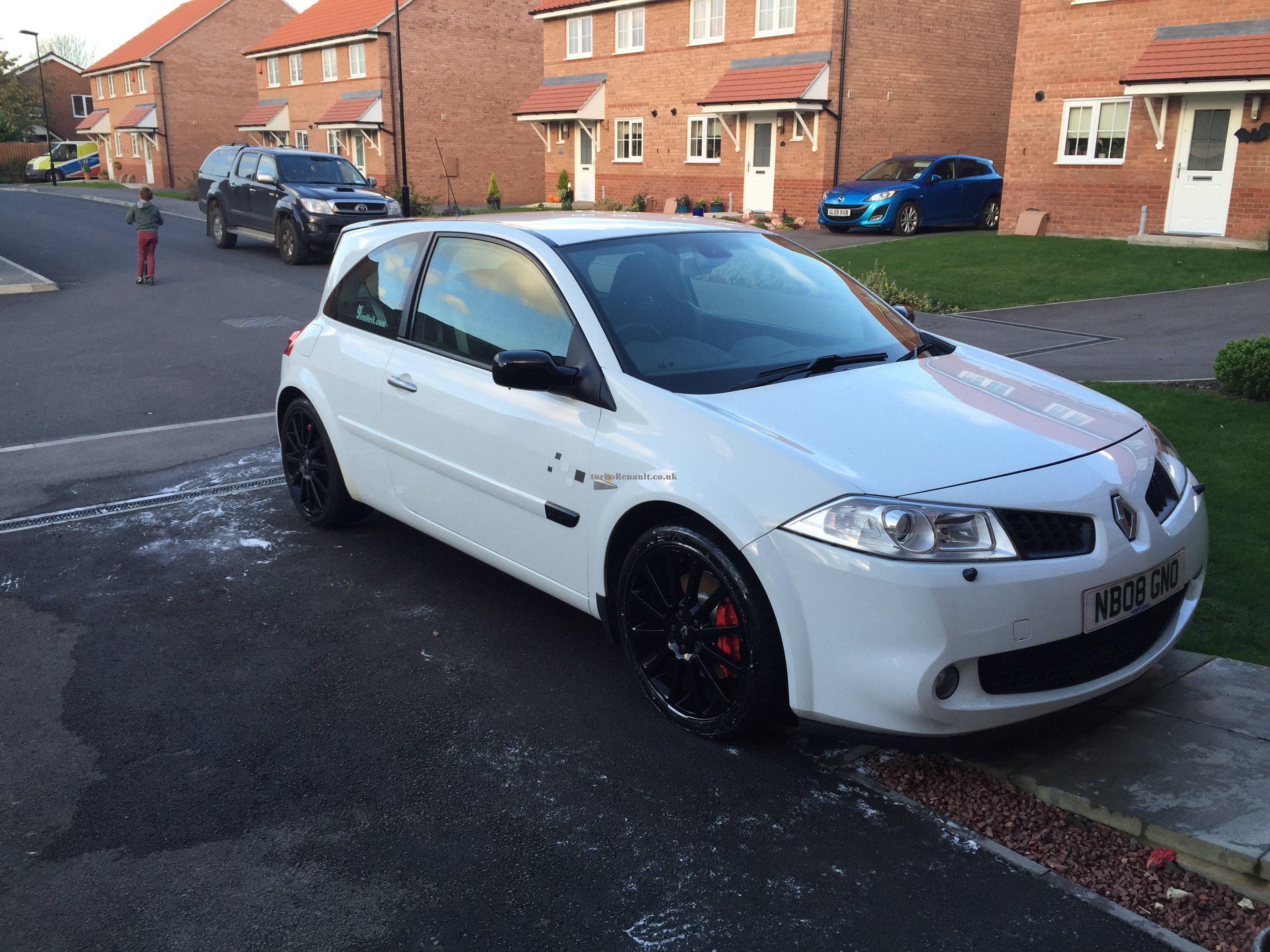 Its ace ! lots of useless stuff I cant really read while on the move , but still - its a gadget.

In other news , driveshaft changed.

In other, other news , other driveshaft is also clicking.

I took the Meg out for a run with the family down south to see some friends.

One thing that I have to note is the smoothness of the power delivery and the ability to very easily get into long ban territory.
For instance I was overtaking a car and they decided to speed up on the dual carriageway , no idea why. I was going a constant velocity due to the limiter an they started creeping stopping me from overtaking. Pedal to the floor ensued and shot off, kept it down for what felt like seconds and looked at the clock then the disappearing lights as triple figures was firmly establish and 5000rpm in 6th was achieved. Cue the time to get off the loud pedal and limiter to reactive.

I prefer the limiter , not cruise control BTW as it allows me to moderate my speed a lot easier and not get carried away !

A few months ago I set about fixing a small crack in my front bumper. To cut a long story short I fixed it but the glacier white paint match wasnt great.

Going to dig out some fine 2500 grit paper and sand it back and repaint it. Its on a corner and at the top so its a bit of a pig to do. I might if the weather isnt bad sunday remove the front bumper and do it that way. If its grim Ill pull the nose of the car in the garage and get the heat lamp on it at the same time.

Also going to have a look at fixing the B pillars - the colours have gone all mottled and faded. Few guys have said they might be too far gone. Going to peanut butter them Friday , and possibly heat lamp it to death again Sunday. I dont use the car in the week so it wont be an issue.

Saw some hydro dipped ones for £50 and was tempted. The steamline carbon ones were £149.99. I am not a big carbon fan really though.

Weekend after its RS Tuning dyno , then I am going to remove the rear spoiler. Its been poorly painted and the paint has sunk something rotten.

For the first time ever the meg let me down today.
Not a catastrophic let know more a minor annoyance that is a silver lining.

I had just overtaken a slow moving vehicle and was going the speed limit for that road when I heard a scraping.

The plastic undertray had come away on one side of the car. Renault in their infinite wisdom used 3 captive bolts to hold the undertray on. On my particular beast 2 of the three had siezed so some long self tappers were installed as RS tuning.

One has left the car , the other was doing the square root of FA.

I have re attached the self tapper that was doing sweet FA and now the captive bolts that were siezed are long gone.

Ill be getting two more of those with some daddy sized washers , some loctite and applying them next weekend.

It also pinched my finger really bad when I pushed the plastic back together. Typing with said finger up in air now. Its my mouse click finger too.

Update on the above catastrophy.

There are 3 captive nut holes. Only one would fit as the other two are goosed.

the rear left of the two plastic under trays had cracked and left the original bolt in place whilst the fractured part dangled down.

I took the lot off. Took it into my garage , drilled 8 holes and stitched together the fractures with some zip ties. JDM drift style. I then refitted the item and attached in the one functional bolt. I drilled again 4 holes toward the outer edge of the shield and zip tied those.

Its mint now ! Done a few higher than average speed tested and zero movement. When ( if ! ) it fails Ill just buy a whole new tray. Until then. Its BAU.

Treating the meg to :

I want to keep on top of the maintenance and keep her in rude health. The Audi SWB fund can keep on being topped up then

took my car to Mark Black @ Bolsover Car care today as I needed it working on , and on a Saturday.
Very impressed with everything there TBH.
I was booked in for a rack bush , TRE ( outer ) , bottom swivel bearings and alignment.

After whipping off the front wheels this was revealed 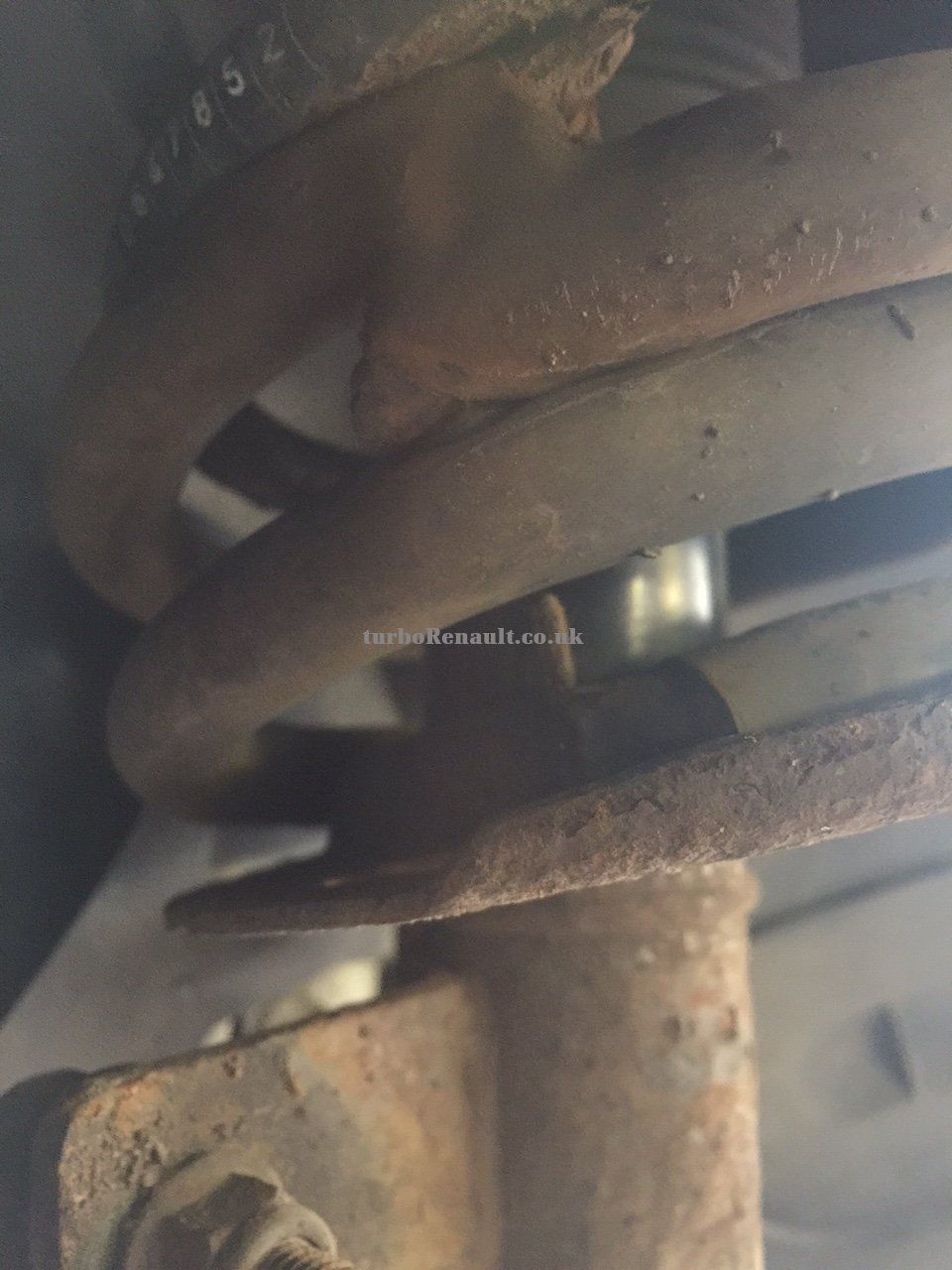 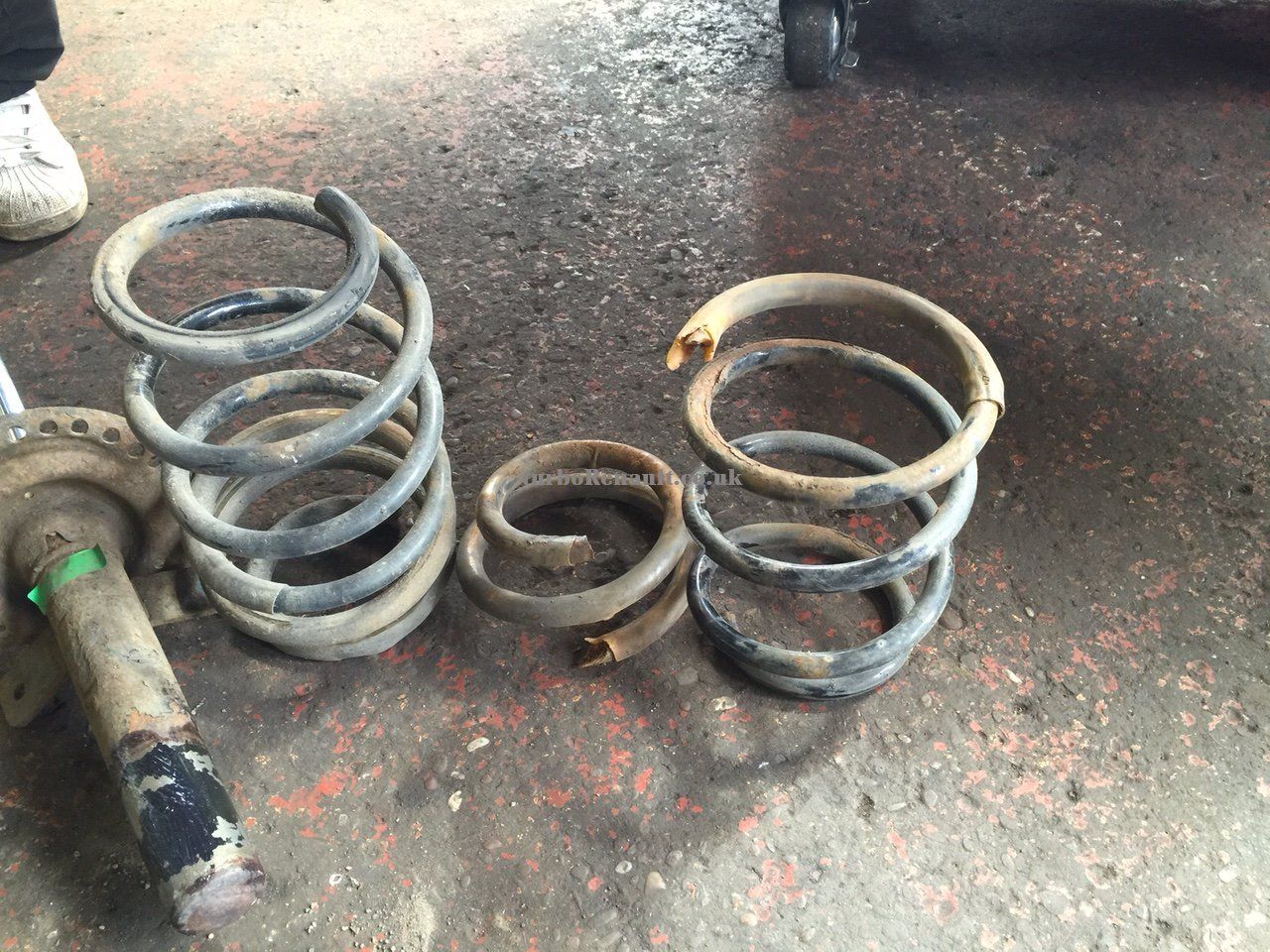 Bugger. Snapped spring. No where was open where I could get a spring short notice , but fortunatly one of Marks friends had just bought a set of cooksport springs. he fetched his down , I bought some more online to replace his , and job done.

The rack bush has been fitted , and it feels awful. Notchy and stiff. Apparently it will calm down.

We didnt fit the TRE as the inners are knackered , but not ordered ( my fault ). Bottom swivel bearings have been fitted ( buy them here )

I will request Mark order the inner and outer ties and get an alignment done after. Car should be good. Tempted to replace the bushes at the same time …