I have just just watched a video on the new 911 GT3 RS. This got me thinking how I can afford a £175k car and I have decided that if I sold everything in my life I would still be around £145k short. I have now abandoned that idea and started looking into the aero on the car.

I suspect all the aero on the 911 has been done on a computer with various scans and products such as cart3d or autodesk CFD.

Does anyone, or has anyone looked into this on the exige s2? I suspect something like a swan neck rear spoiler would be very hard to make work, but I note that items such as sideskirts already exist as aftermarket items for the exige. Do they make any difference though?

I know Dave seriouslylotus had airvents at the top of his car to help with the arch turbulence but I have never asked him if he felt the work justified the results.

I dont understand the cutouts on the front arches and the deflectors. What are they for? Do they channel air away from the arch creating a low air pressure area? Or is it to hot air removal from the monster brakes? EDIT : I do now! Its to aid the air out of the wheel wells!

Regarding a swan-neck mount, the way the standard wing is mounted should make it easier on an S2 than, say, an S1.

Because the OE mounts are quite well forward of the wing’s leading edge and steeply angled, a more upright swan-neck mount could keep the existing fix points and wing location.

You might want to lift the wing though, as the OE ‘slot’ is quite restricted and the swan-neck is all about making the underside of the wing work more efficiently by eliminating flow separation.

I dont understand the cutouts on the front arches and the deflectors. What are they for? Do they channel air away from the arch creating a low air pressure area? Or is it to hot air removal from the monster brakes? EDIT : I do now! Its to aid the air out of the wheel wells!

Just copying off the 211 innit. 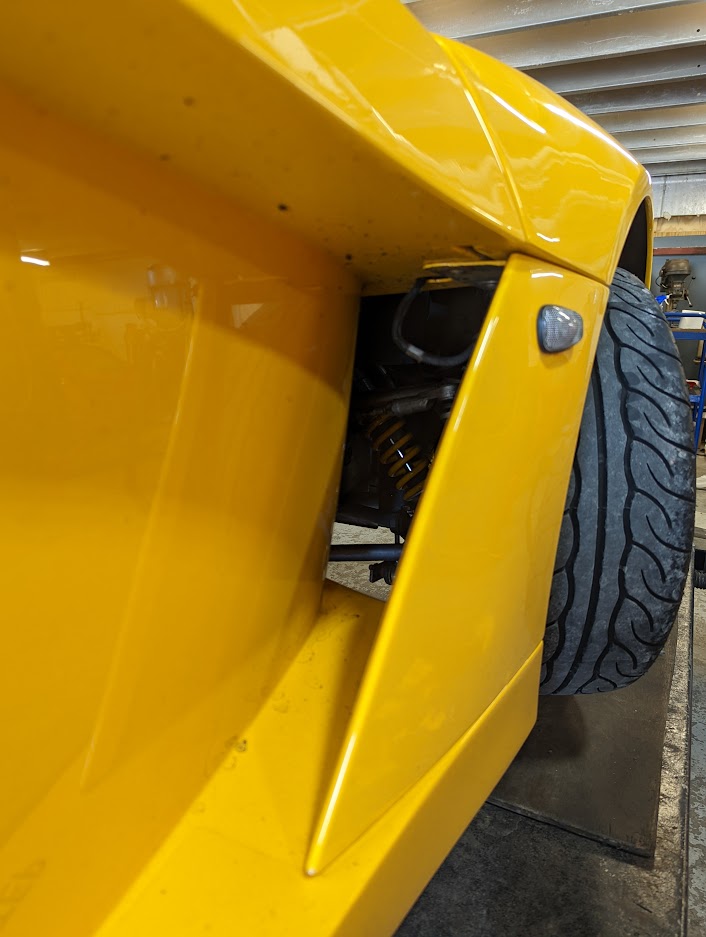 If you’re serious about aero on an S2, the only place I’ve seen with both published results from wind tunnel testing, and commercialised products as a result are Reverie. They did a pretty comprehensive setup for the S2, front splitter/front undertray combo, side skirts, infills for the rear under trays to close out the floor a bit more, diffuser, canards and of course - a big old wang. There’s a PDF floating around somewhere with their results in it (edit: Found it - https://www.lotustalk.com/attachments/reverie_wind_tunnel_test_session-pdf.152540/), I think they worked out that the single biggest aero upgrade on the S2 was removing the bottom exit tailpipe and moving it to the rear (with an unmolested diffuser in place of the original holed one).

I’ve actually got a reverie splitter/undertray in my garage. Picked it up cheap as a repair/resto project a couple of years ago and never got round to finishing it. I was trying to restore the CF aesthetic of it (badly), really it just wants a skim of filler and painting black and it would be good to go.

This information is gold gents. Thanks. I shall investigate

I watched the Henry Catchpole Carfection vid after seeing your post. I am a fan (but don’t tell (Tim_Marra)

I watch as much of the video as I could stomach. About 2 mins. It’s hideous