Guaging interest and sorry for a long story : I am nearing completion of a full rebuild (well ‘my man’ is!) of a 2005 Exige S2 which will be exactly like the picture attached (copyright apologies to the actual owner).

This car was imported by me from Guernsey in March last year where it had a done a couple of sprints, it was a bit tatty but not a problem as my intention was to spend the last 12 months having it sorted and then use it this year for hill climbs and sprints… BUT … I already have a 225bhp Elise which I compete in and obviously last year’s events were curtailed and my target of getting to Europe with the car were cancelled… ho hum!

This means that I need to use the Elise again this season as the Exige will be ‘too nice’ to hammer up the hills, to try to qualify within the British Cup Championship for the Masters finals in Portugal in October.

I therefore can’t really justify having two Lotus cars so wish to see what interest there would be in the Exige?

It is an original UK car in dark grey (somebody may know or have owned it GX05LWR?) but had Cat C damage (not chassis) and I have pictures of this.

I collected it from Guernsey in March 2020 and it was completely stripped and has since had an amazing (!) amount of money spent on it, for which I have lots and lots of receipts.

Plenty of other stuff done and the car has just had a full respray in Lotus Isotope Green and will have the registration number S55 EXG.

Should be finished and have a fresh MOT by the end of March.

I would welcome thoughts and comments? 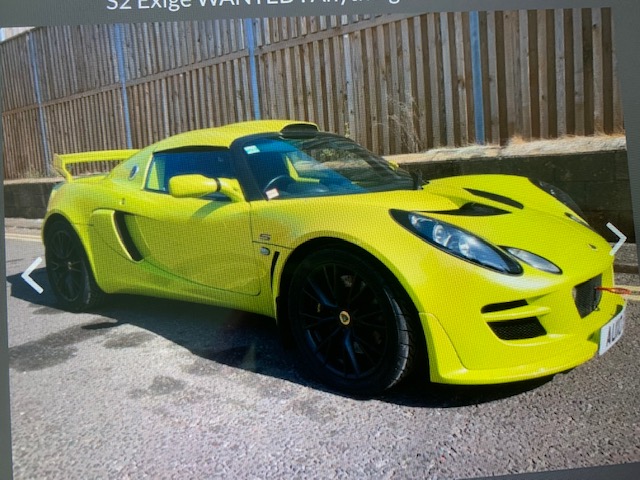 Hell yeah! Naturally Aspirated is my thang! I really want to read about this! Would love to know what it weighs and what kind of power it puts out!

I obviously can’t go down the route of purchasing though - I already have my NA 2ZZ, but this sounds like a very special car with that spec so I think people would be interested to know what power it produces? Surely what you’ve created is worth good money - but won’t necessarily be a straightforward, quick sale as it’s modified - which isn’t everyone’s cup of tea?

Well, as I said, it will hopefully be finished by end of March so I’ll get it on a rolling road and see what power it makes etc!

Exige is just about finished and now has a ECUmaster Black engine management system fitted,
Another new project on the horizon so I’m open to offers for the car?
(how do we load pictures on here?). I can email details and pictures if interested.

What were the specs in the end? Weight/power etc

Exige is just about finished and now has a ECUmaster Black engine management system fitted,
Another new project on the horizon so I’m open to offers for the car?
(how do we load pictures on here?). I can email details and pictures if interested.

I stick the pics on imgur, then use the

I have now had the Black ECU properly mapped at (very helpful and professional experts) RRR Engineering of Kimbolton and what a difference it makes, they use hub-dynos and the MWR stroked engine produced 220 bhp … they commented that it was one of the best (if not THE best) normally aspirated 2ZZ engines they had ever seen , with a simply amazing linear torque curve!

Complete change of plans (AGAIN!) and I am now looking at possibly stripping this car and putting it back to near standard using all the original bits I kept, then selling all the good stuff, MWR Stroker engine, 2bular system, Ohlins, Cup 260 forged wheels, Schroth harnesses and Tilletts separately to try and recoup some of the £40k plus I have spent (DOH!) … the car did a 58 second run at Loton Park Hill Climb (with younger driver!) last month … Am I making a mistake?

I have no doubt you will have zero problems selling the parts. Begs the question though ; why?

Car now SOLD to fellow fast lady hill climb racer, which I’m really pleased about as it will get used properly!

Decision made, no need to strip the Exige, as it has now been sold and I am going to compete with a Porsche Cayman R in sprints and hill climbs.