Hi, just wanted to say hello to everyone on here. Finally managed to become the owner of an Exige! I bought the Black S1 Audi Exige Will B was selling, it is one heck of a car. I’ve been an S1 Elise owner for years and done a lot of modifications over that time (weight is down to about 690kgs plus fitted a VHPD) and it’s pretty nibble, but my word the Exige is on another level. Obviously still getting used to it but always hankered after one of Bernard’s conversions.

Flew down to London from Aberdeen to meet Will B. A great guy and true to his word and description of the car - made the purchase seamless. Also arranged to meet Bernard on the journey back up. What a nice guy, gave some gems of knowledge and advice and had a look over it, not often you get to meet one of your hero’s. Then drove it back up to Aberdeen, the sun shone all the way! Loads of appreciative nods and waves from other drivers. So pleased.
Will

Welcome - and big congratulations on the purchase and what a journey to kick off ownership! Keep posting be great to hear more

Congrats on the purchase, sounds like it’s gone to a good home

Welcome along and thank you for taking the time to register.

Would love to see a owners thread to follow progress as you get along with the car.

London to Aberdeen must have been a right trek!

Thanks for the kind words of welcome. Yes I may start an ownership thread as there are some some things I will likely change such as the MOG CF seats; can’t get on with them so might look to sell/replace. Want to drive it some over the summer before diving too deeply into any work plus of course a possible trip to Knockhill.

Thanks for the kind words of welcome. Yes I may start an ownership thread as there are some some things I will likely change such as the MOG CF seats; can’t get on with them so might look to sell/replace. Want to drive it some over the summer before diving too deeply into any work plus of course a possible trip to Knockhill.

I have zero experience of the MOG seats but can heartily recommend Tillett seats.

Welcome Will, the Exige looks great.

Your S1 Elise sounds interesting too. I had a K20 Elise that I managed to reduce to 690kg, it makes a big difference to how they drive. Do you have details of yours?

Hi Will, I also have a Bernard/Guglielmi converted S1 Exige. I bought it in a pretty tired state, now fully rebuilt with a few improvements to the original setup, so if you ever need any advice on repairs or mods, give me a shout as I can probably save you time & head scratching.
Cheers
Alex

Is this the ex Mike Lane Audi Exige? I remember seeing at at Donington Park in the early 2000’s - blimey it was rapid!!!

Hi Ste, yes the Elise is pretty well fully stripped out, and then Ali tank, CF seats, light battery, nitrons, light engine mounts, all the usual bits. I started restoring it in 2017, full respray and almost a nut and bolt rebuild, then happened upon a set of speedline corse wheels which look wonderful. It’s pretty well finished now. I was literally searching for roof repairs and came across the Exige. I will post pictures at some point of them both. Can’t bring my self to sell the Elise but I know I must.

Hi s-express, that’s really kind, I will take you up on that as there a few small bits I’m unsure about. Really appreciate it.

Hi SimonE, yes it is, I do not know Mike, but heard a lot about him. I hope he will be pleased someone appreciates his hard work and modifications. I was going through the paperwork and wow he lavished a lot on it. Yes I can imagine it will be really quick as it just pulls so well, huge amounts of torque.

Hi all quick update:
Managed to get a day on the car yesterday - I’m focusing on normal maintenance type stuff and small cosmetic tidy ups this year rather than full rebuild - I just want to enjoy driving it and getting to know it first.

The drivers side inner CV boot had gone (thanks to Bernard and S-express re guidance on sourcing parts), I also extended the heat shield around the CV boot as advised by Bernard (which i gather he did on the later cars),
Drivers seat removed and modified to get it lower - as it is on runners it was too high for me (felt like sitting on top as opposed to in the car - my knees nearly touched the bottom of the steering wheel). I’ve managed to keep it on runners - I do a little carbon fibre work in my spare time so managed to move it down by about 30mm - doesn’t sound much but it is so much nice plus easier to get in and out of).
The brakes now stripped and cleaned. As it’s not really been used for a number of years everything is dry and needs a little TLC. Front track rod end boots are both split so a job for this week.
Lastly rear diffuser looks like it has reversed into something. Like an idiot I tried to straighten it and with some careful panel beating all I’ve done is stretch the aluminium between the spats and now it’s bowed and springy - I might make one out of CF but thats for another day.

A few parts needed:
Front clam I’m fairly confident is aftermarket and was really badly fitted (no spacer washers hence couple of cracks on the front where it was sitting on the crash structure underneath). It’s missing the grills at the back where the clam meets the door - if anyone knows what they are called and also where I might be able to get some that would be much appreciated.
The car has brake duct cooling at the front which had rubbed through - quick temporary repair job was undertaken (duct tape!). Plus the wheel arches at the front have suffered the same fate at the top - does anyone know where I can get wheel arches these days? or is there an agreed repair method. I suppose i could sikaflex & rivet a piece of plastic over the holes.

I tried to add some pictures but it doesn’t seem to load. I’ll try to work that out.

I just attached some shallow take away tubs to the top of the arches to cover the holes, bit of tiger seal. You can fit new liners but they will quickly look the same.

Any updates on this thread Will, how are you getting on with the car?

Hi Hoon - I’ve managed to get out in it a few times and am slowly working through a tidy up list. A few Friday commutes to work have been great this summer - it’s the perfect dress down Friday car. I’m tidying up the parts I never liked such as the loose cables for the extinguisher and kill switch which were messily hanging down the inside passenger sill. I’ve also removed the horrid rear camera set up. Where I live, I don’t really need it and it was just in the way on the dash (again with messily dressed cables down the passenger sill).

Next on the list - the cam chain is noisy and needs sorting plus the wishbone bushes are dry and make a terrible noise. I did some reading/research on Seloc etc. re wishbone bearings and these look a good option. It led me down a rabbit warren of reading posts from the past 10 or so years. Stumbled upon one of Simon Scuffham (on VX220.org) being abusive to some poor chap who had the audacity to suggest something. Randy then appeared to give a balanced view that they were a good product. Brought back memories of the late 2000s on Seloc with Scuffham hurling key board abuse at anyone who dared disagree with him, those were the days!!

I’ve had a weird issue with the stack dash where it cut out when I pressed the brakes. It didn’t do it when I bought it and have only fitted a trickle charger connection (hard wired to the battery terminals). So I cleaned all the front earth points really well (and to the chassis) plus changed the brake light switch in case, and that appeared to stop it. However, went out in it again and it cut out when slowing down and turning into some junctions (when not pressing the brake). I’ve cleaned the rear earth points and checked the stack dash connections, not had chance to drive it since to test if I’ve sorted it. I may try removing the trickle charger connection back to how it was just in case.
That’s about it for now. It needs a respray which might get done this winter - I thought I didn’t like black, but it’s really grown on me. My kids call the car ‘Toothless’ (reference to how to train your dragon for any parents out there).
Will

I’ve got a S2 not a S1 but I’ve always loved the shape/noise of the S1, there’s just something about them. I have thought about selling mine to buy one but I can’t bring myself to do it.

So I started thinking about building an Exige rep, it’s just trying to find a suitable donor car plus the assorted parts. I’m always thinking about it but never get round to doing anything about it. As with most people I suspect, it’s time and money I guess.

I did promise to post some pictures of the original Elise I had been refurbing. It was my daily drive for about 4-5 years from 2001 -2005. Track day on Sunday, drive to work on Monday - brilliant fun and I got to really know the car by driving it daily and tracking it. It then slowly had weight removed and a VHPD fitted, and Sinclair’s set it to 340R dry track Geo. Got out on Knockhill a few times when I moved to Scotland. It’s such a pleasure to drive, so focused.

Then life got in the way, and it sat in the barn for about 10 years. I started doing small jobs on it as a stress reliever from work and before I knew it, I was into a full refurb. Well not quite, engine and box didn’t need it, I also didn’t go as detailed as some have with cleaning every single component, but virtually everything else mechanical from brake pipes to heater box - all the usual really. It still makes me smile, but a lot of money has gone into it. Have decided not to sell on advice from a few people (plus time is wrong now). 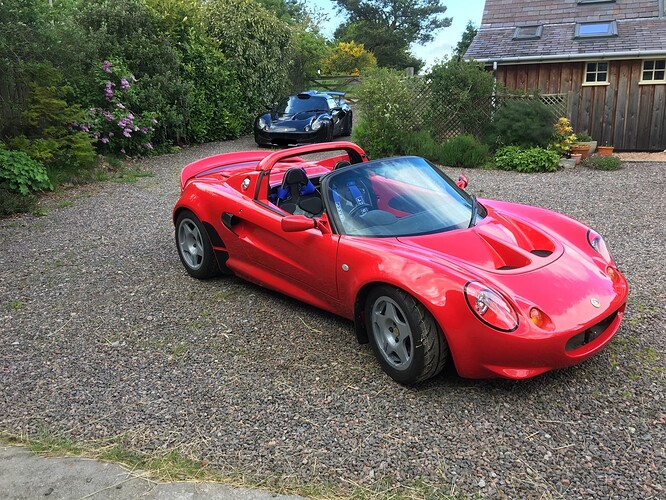 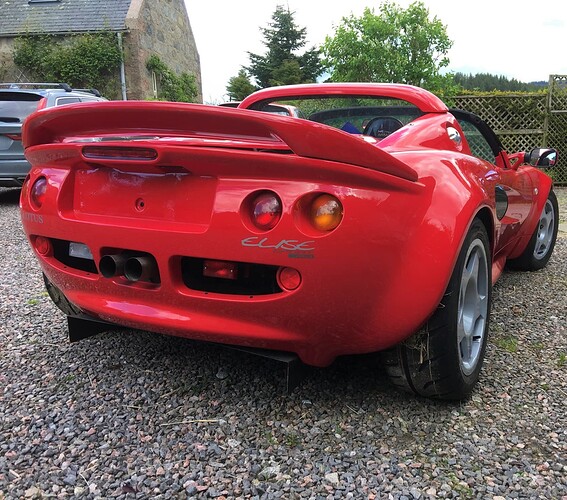 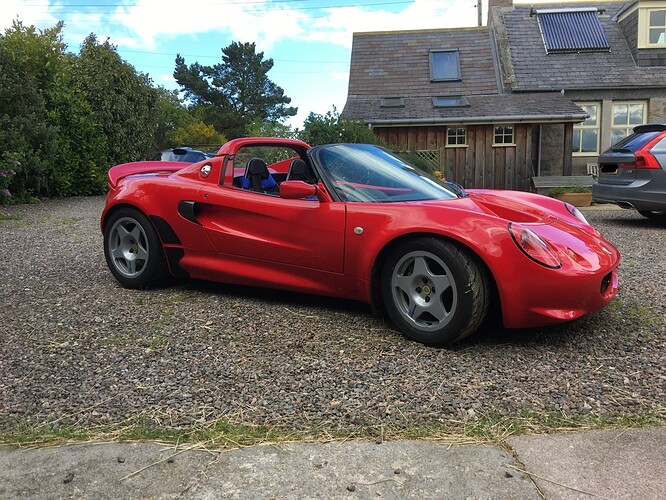 That’s all for now
Cheers Will