Anyone interested in seeing an update on this? I know I don't have an exige now but I like reading about other people's projects so hopefully you do too.

Autumn 2021 I took some time off work and got a couple of long outstanding jobs done. I spray painted the outside to give it some more weather protection, so from this 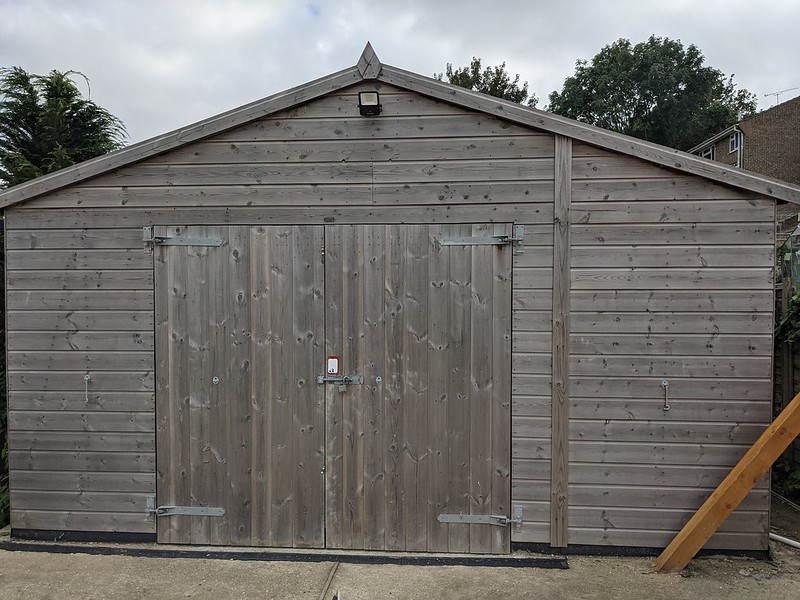 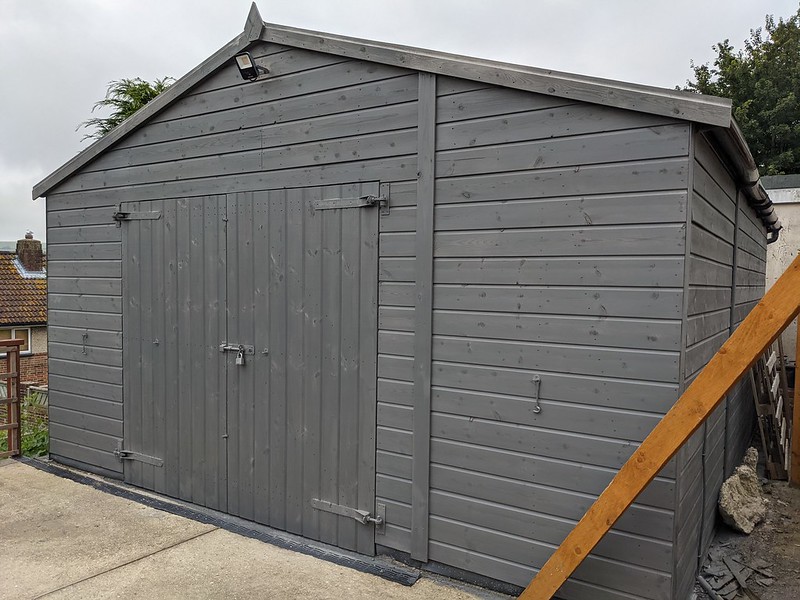 It may not have been my first colour choice but it's just a mix of two different left over grey paints and so was free.

I've mentioned previously that I am getting some water leaks in heavy rain where its pooling outside at ground level and seeping in through the brick course. Mostly due to a poor design choice I made at the rear wall of the garage and I get a puddle forming inside. I put a waterproof mortar fillet all round the outside now and then painted with a waterproof bitumen paint. It's rained a lot since but no leakage yet so I hope it's working. 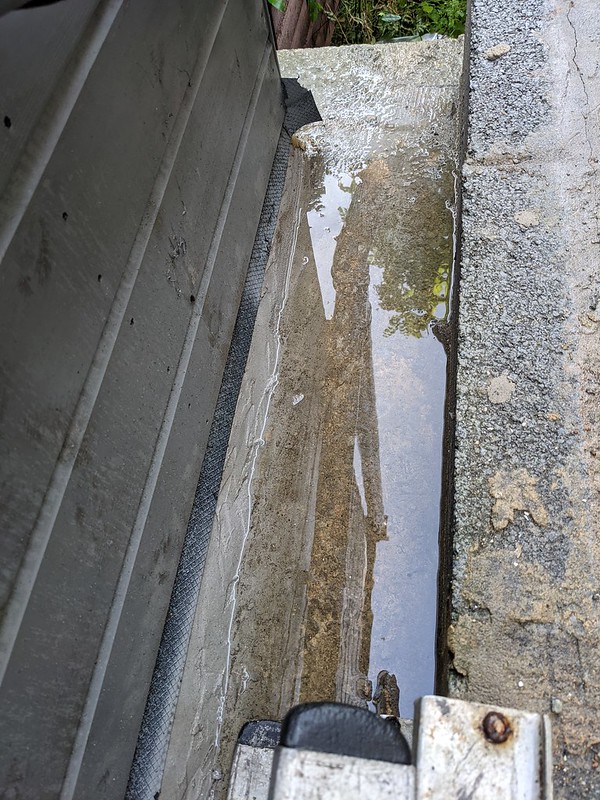 There you can see the problem where the water doesn't drain away and also where I've put the mortar in.

I had an electrician come round, he's quoted me for running a proper permanent supply up from the house, part of this was to triple the lighting I have currently which although sufficient could definitely be better.
That electrician never ended up doing the job but he recommended someone else, who around Easter finally came to start.

Apologies if I use the wrong terminology here but we had the fuse board replaced in the house (which was a whole other drama as we had to get uk power networks to send an engineer out to assist with the main head and moving the meter and tails). Then we ran a 16mm armored cable from a separate isolator all the way from the utility room, down the side and across the back of the house, up the side of the garden and into the garage. Here's the jumble of cables in the utility room now, the isolator on the right side with the armored cable out the top heading off to the left of the photo: 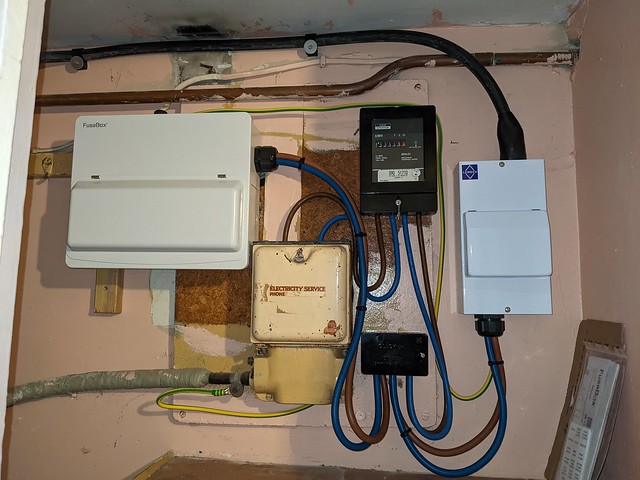 Up until now it's been a 'safe' bodge of a thick flex running out of a hole in my living room wall via some rcd's etc. I'm relieved this is all gone now!

I went 16mm cable over 10mm (the electrician did not thank me for this, it's a complete pig to manipulate) for a little extra to help future proof the power requirements e.g. if we want/need to put an electric car charging point up there. In the garage we then have another fuse board and separate power, lighting circuits. I had seven 2-gang sockets put in around the garage and an external 2-gang on the front wall for power tools/pressure washer use on the hardstand. 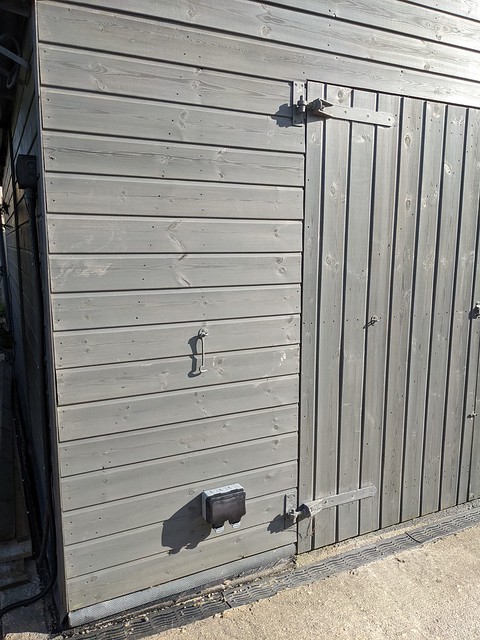 This is a total lumen increase from 11,200 to 38,400, with better distribution of light too. The photos don't show it well but 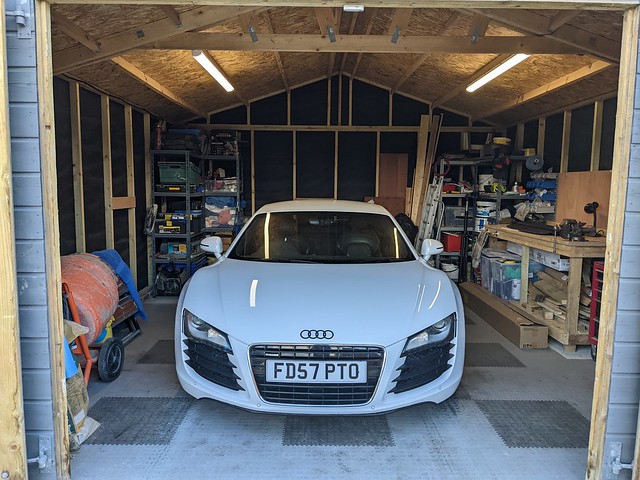 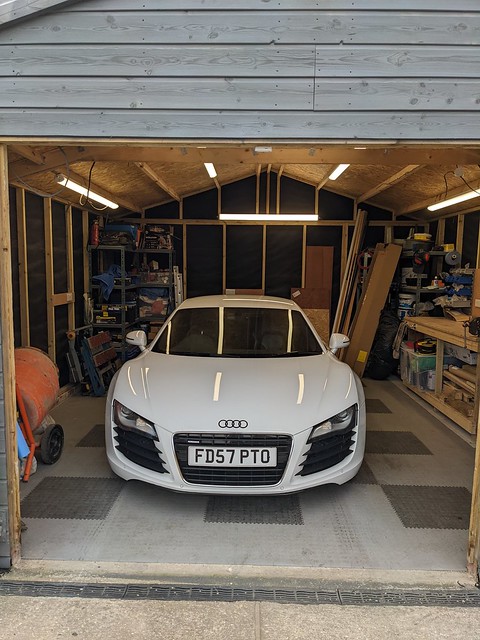 I then ordered some 9mm OSB (8 sheets) and started boarding the interior walls. 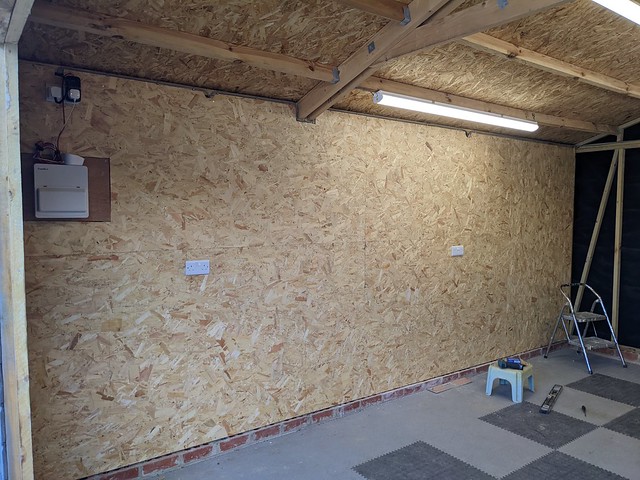 I managed to get one coat of paint on the boards and half the ceiling (not cut in the edges yet) in one day. So another coat of paint required, then I needed about 9 more sheets of OSB to finish boarding the rest of the walls.

You can already see what a massive difference this makes to the feeling of light in there. 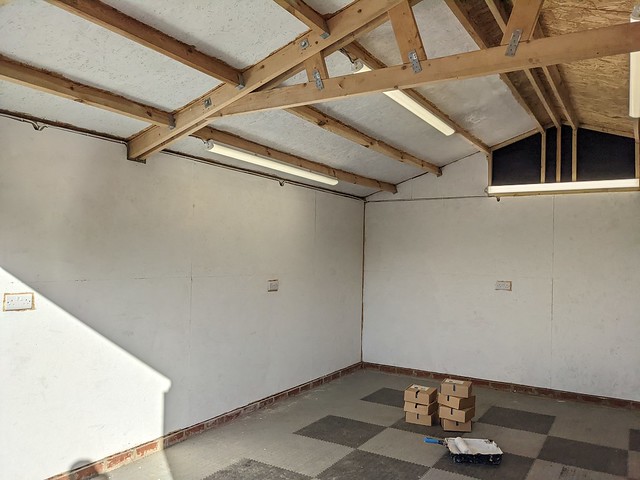 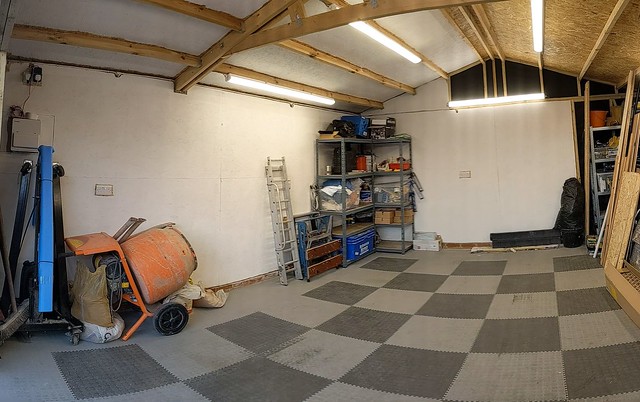 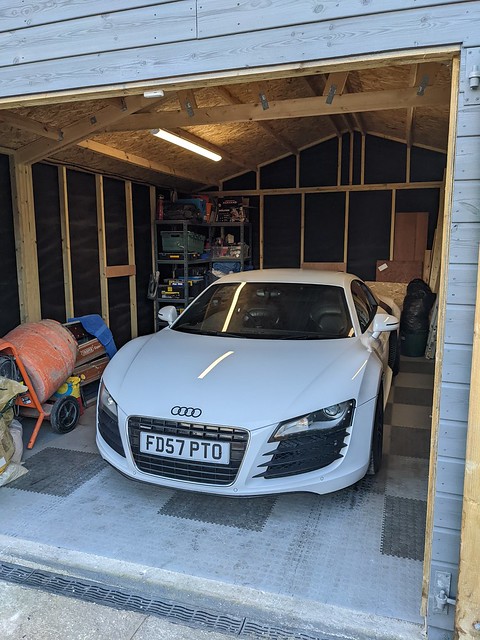 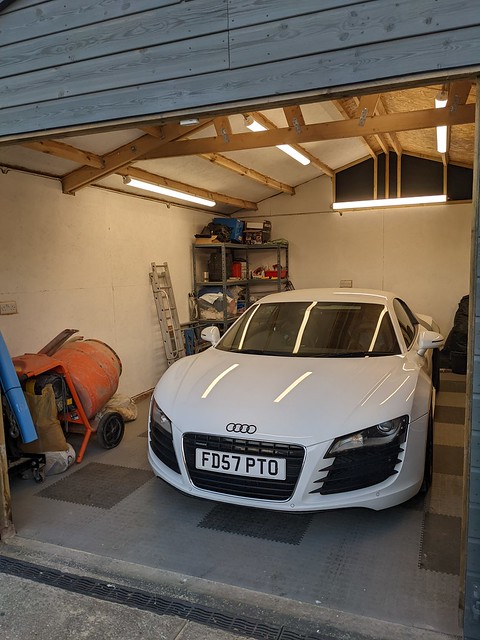 Another two days on it and I finished all the woodwork.

First and more importantly, a milestone - I finally finished laying all the floor tiles - a job started in the first covid lockdown of 2020 IIRC. This was delayed as I was waiting to see if my waterproofing was stopping the floor getting wet inside, and also because I couldn't be bothered to move all the shelving and workbench. But while it was out of the way I finished the job.

Saturday I was on my own and progress was slow. I managed to get about 4 boards up on the front wall. 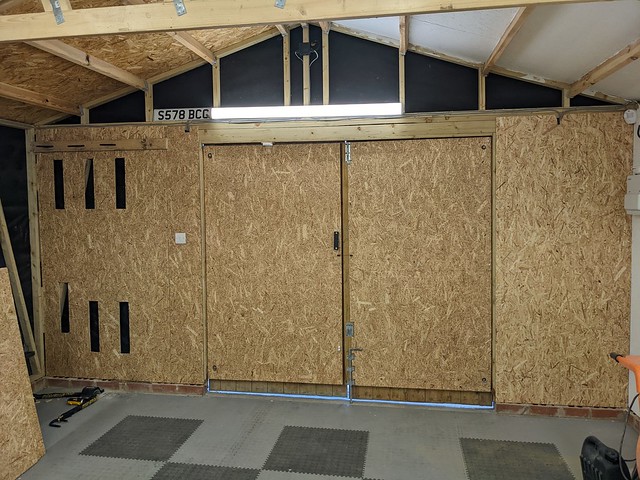 On Sunday I started in the morning, my dad came over after lunch to help and by 7pm (with rain showers along the way) this was the state of the garage.

After another hour of tidying up, all the walls were finished. 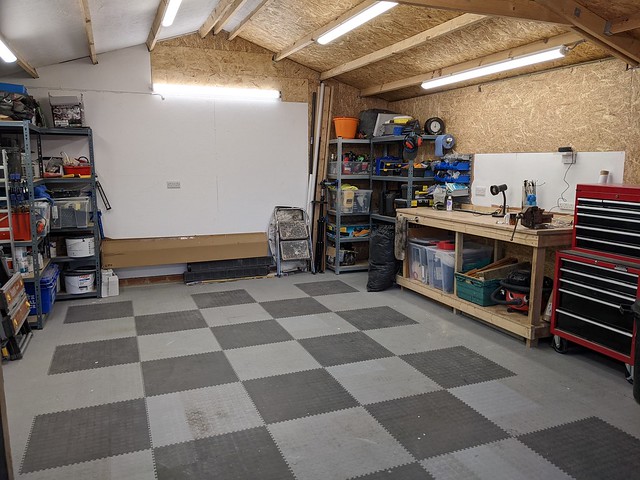 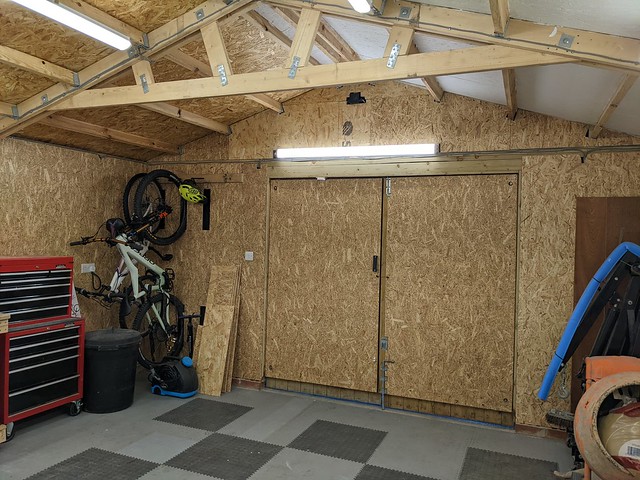 This was turning into a much bigger/longer job than I anticipated.

Two more days of painting later I was finally drawing a line under this one. Was up the ladder to get it done over the Jubilee bank holiday weekend, wobbling around with a hangover but determined to finish. All that's left is to find some nice pictures for the walls and give the floor a good clean. The difference is remarkable, I'm really pleased with how it's turned out. 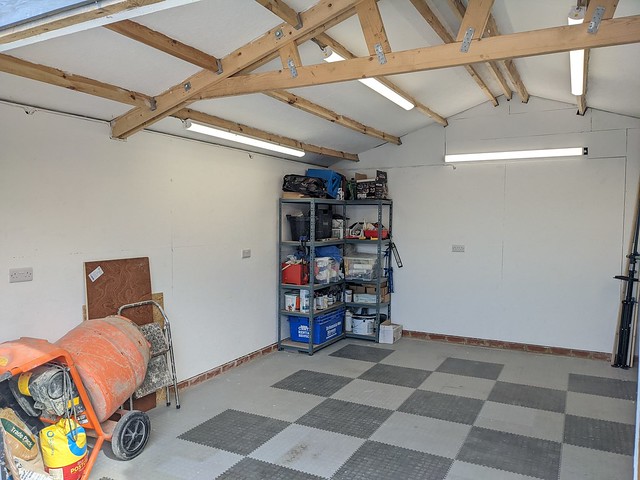 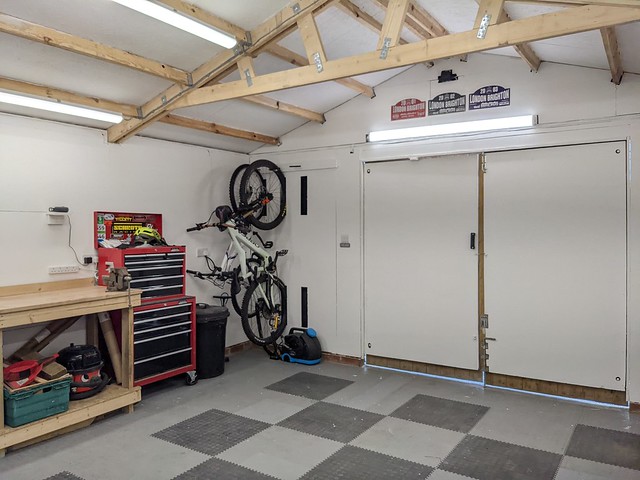 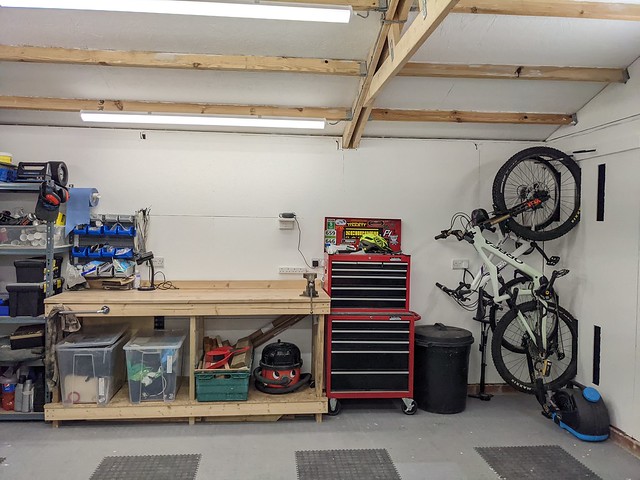 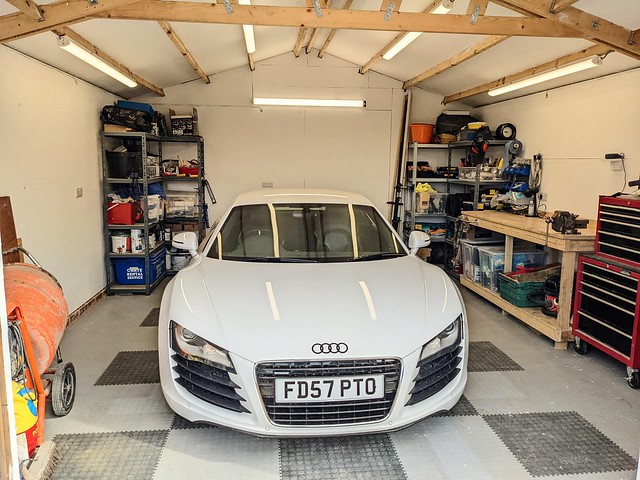 I do enjoy threads like these. Inspirational if nothing else.

just needs a fridge and sofa and you could live in it...nice job
Top
Post Reply
34 posts