I pulled the trigger on some duramat a few weeks ago. Got the 4x6m garage pack which included 8 ramps and 96 tiles. Didn't fancy a pretty pattern, just because I'm more likely to get the floor dirty/scuffed up whilst tinkering so wanted to keep my options open for tile replacements etc. My garage is an exact(ish) 5.3mx5.3m square, so my 96 tiles were never going to give full coverage - but the next tier up of pack would have had far too much waste so my plan was to cover the majority then work out what extras I would need for a separate order later.

I started off with the walls, they're my main source of dust so considered painting them. They're single skin and you can see a white salty/chalky residue creeping through - seems to be a winter/early spring thing: 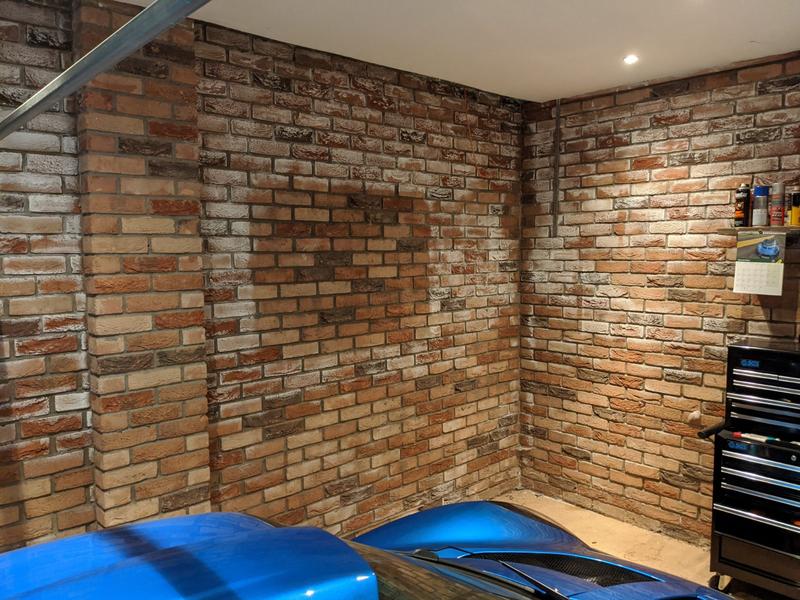 The back of my whiteboard was covered in mould so definitely moisture getting trapped, even though the garage itself seems totally dry (store lots of carboard etc in there, never seen any damage).

After lots of internal debate I decided I liked the brickwork too much to paint it, so out of desperation I tried an interim compromise which was to spray all the walls down with diluted PVA to see if it would seal in some of the dust. If that doesn't work, I'll just come back to painting it later. 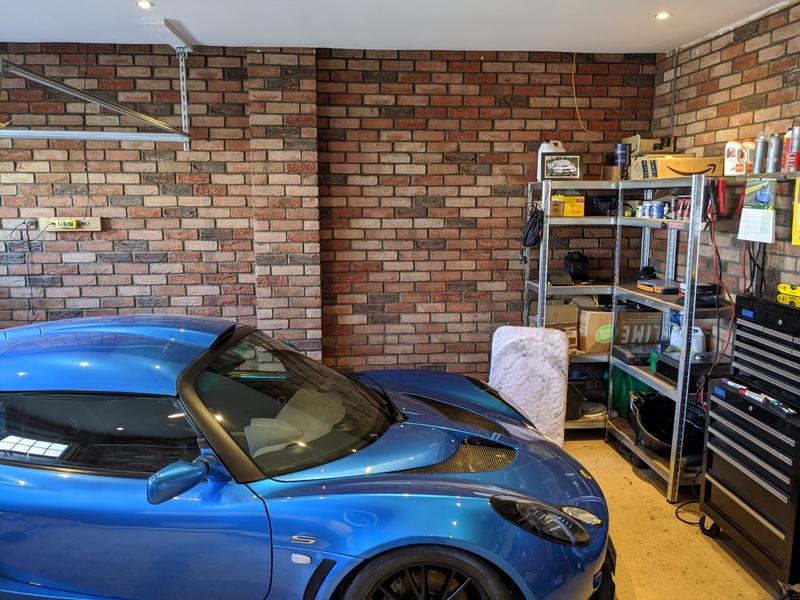 Floor arrived in 2x2 pre-assembled squares on a plastic pallet, so even quicker to get laid down. You need to spend a minute familiarising yourself with the orientation of the male and female tabs on the tiles as the ramps you send will be very much gender non-fluid. I started in the middle front and worked my way back. I calculated that I could get 9 rows of 10x tiles in, which would leave a 150mm gap along each wall and would leave me approx. 1metre shy of the back wall, this back wall is pretty much filled with workbench/shelves/boiler/etc - which just about fill up that 1metre anyway. 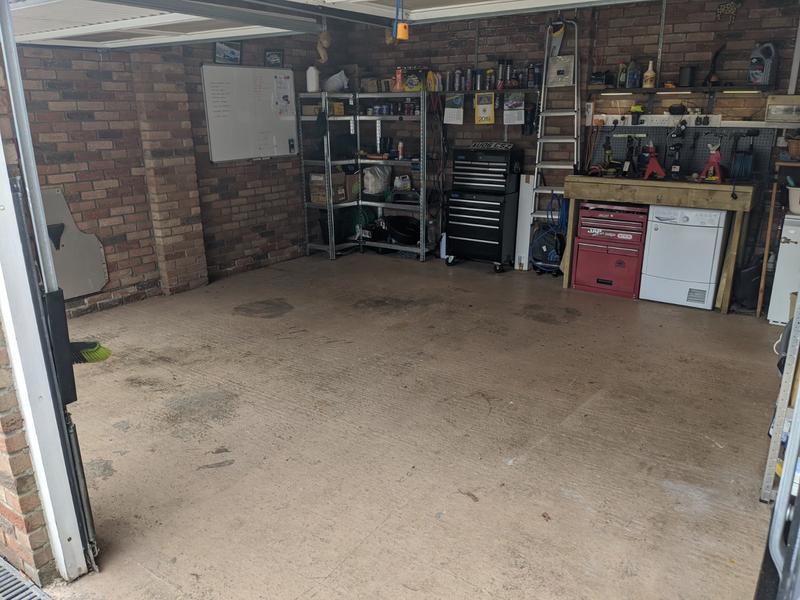 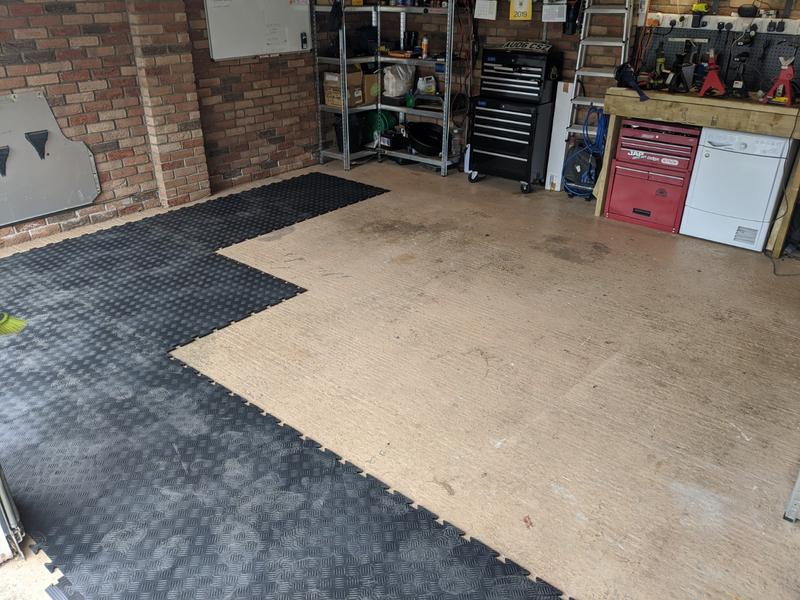 Fitting was really quick, got the 90 tiles down in less than 20mins, then trimmed the final six to fill out the area where my toolchest goes: 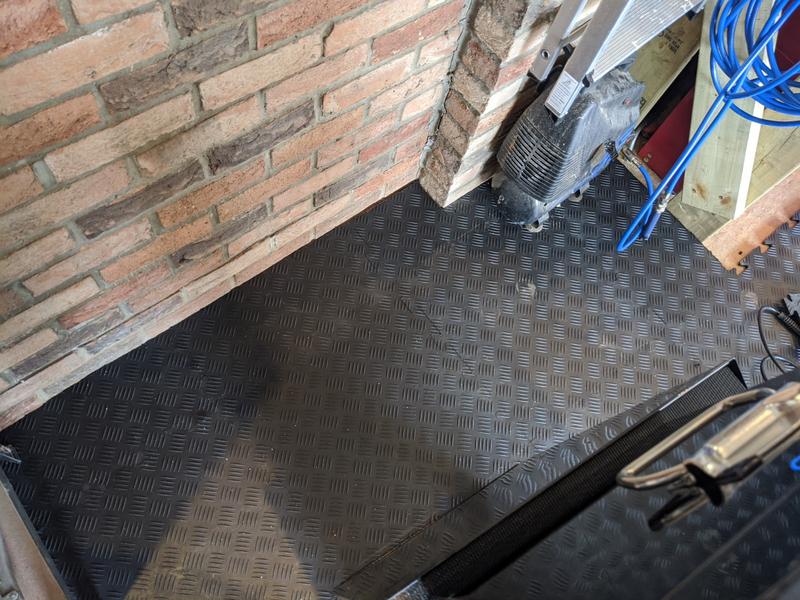 Really easy to trim, they say to use a craft knife but life is short - so use a grinder instead. Goes through like butter, possibly not good for the lungs/environment though. 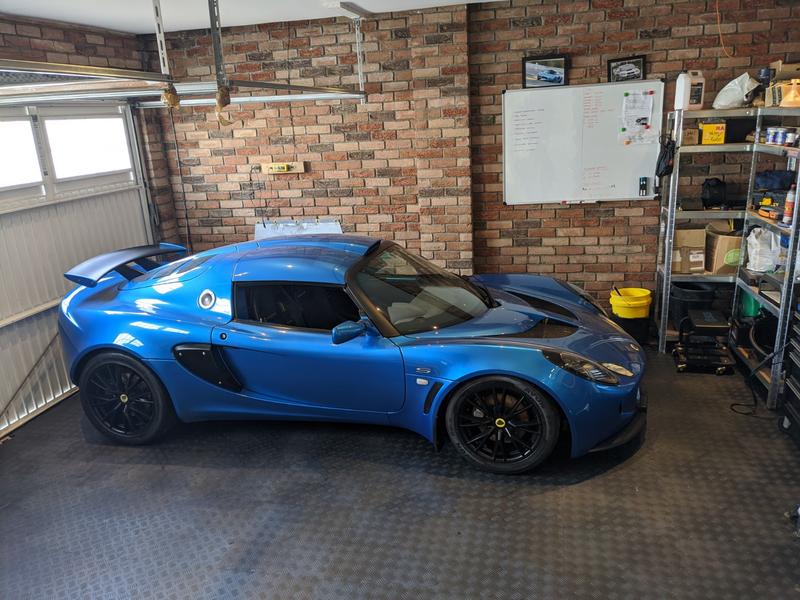 So I'm now left with just my 2x 150mm margins to fill in and a slight gap to my workbench which I'll fit with some ramps. It's probably about £50 worth of duramat spend left to finish the job but as they want £20 delivery I'll just wait until I can bully a neighbour into buying some so we can double up!

First impressions are very good, no deformation at all whilst moving the car around or jacking it up. They're very solid underfoot, just a fraction softer/warmer than concrete to make it a bit more comfortable whilst rolling around. Dropping stuff on the floor is now a much more forgiving experience, which is good because I drop stuff a lot.

Still keen to see how it handles liquid spills, I've left the prescribed expansion gap to the back wall of 15mm so will keep an eye on growth and shrinkage with the variable weather - but if I have to trim another few mm off it's a 10min job at most.

Unfortunately I now have another floor to mop, one downside to black is that my dusty footprints show up a little too well.
Top

That looks great.
I have garage envy!
Top

That looks great, well done. I suspect a lot of people will be doing garage tidying now.

Wish I was lucky enough for a tidy garage. Maybe I'll get a weekend pass soon to have a clear out/reorganise.
Top

PVA seems a reasonable shout. I've used Watco's brick sealant on the outside and painted the inside.
Graeme
Top

Wish I was lucky enough for a tidy garage. Maybe I'll get a weekend pass soon to have a clear out/reorganise.

There's still a lot of junk in there, waiting for the tip to re-open... it's just out of shot

Yes I researched it properly (after glueing my walls...) and the Watco brick sealant did come up for exterior use. I might do that too later in the year as an added layer of defense, easy enough to do on the 2.5 walls of the garage that are exterior facing.

The PVA only took me about an hour, just filled an old pump sprayer with it and went to town. It's dried perfectly matte/invisible too - I think the brick just absorbs it rather than it sitting on the surface, some people use it on very absorbent bricks as a 'primer' before painting as otherwise the brickwork just eats up layer upon layer of paint!
Top

Slightly OT, is that a condeser dryer? If so, how are you getting on with it?
My 17yr old tumble dryer is just about dead, a condenser would fit better in my garage.
Top

johnfishcurtis wrote: ↑Mon May 04, 2020 11:31 am Slightly OT, is that a condeser dryer? If so, how are you getting on with it?
My 17yr old tumble dryer is just about dead, a condenser would fit better in my garage.

It is aye, it's also one of the killer inferno ones which we had the recall done to about 3 years ago. It's on the list to get replaced at some point, but it just keeps chugging along, probably not the most eco friendly type nowadays.

Where it's positioned it's backed right up against an exterior wall and there's even an air brick that the old boiler used to vent out of, so switching to a 'vent to atmosphere' one wouldn't be a big job at all... I just can't remember the pros and cons of each now

Hmm. Your white board is bigger than mine!
Top

Looks wonderful! I used to have a garage with an amazing interior design. My friend is an artist and he drew an amazing piece of art on one of garage's walls. Shame non of us have any photos left.
Top

Forgot about this thread... probably have a few updates for it. It's currently a dumping ground as fallout from the kitchen work we recently had done, and I plan to change some storage around once I get it cleared out.

Someone remind me to update when I do!
Top
Post Reply
11 posts