How's the disassembly process going - any more news on discoveries?

I'm currently going through a similar process, only with a 30 year old Ford Pinto engine...never seen so much cam lobe wear,one of the exhausts must be 60 thou down!
Top

I’ve been a bit busy. Ordered some flywheel bolts so I can jam the crank. Progress soon, I hope.
Top

Some progress. The flywheel bolts arrived from EliseParts. These are just cheapo ones but perfect for the job. Using two bolts was able to jam the crank on my engine stand using a screwdriver. The bolts have a much finer pitch than normal bolts, so don't try odd ones you have lying around. The pulley wheel then came off with a good bit of force. I needed an extending wheel brace to undo it. My cheap long ratchet bent in the process. 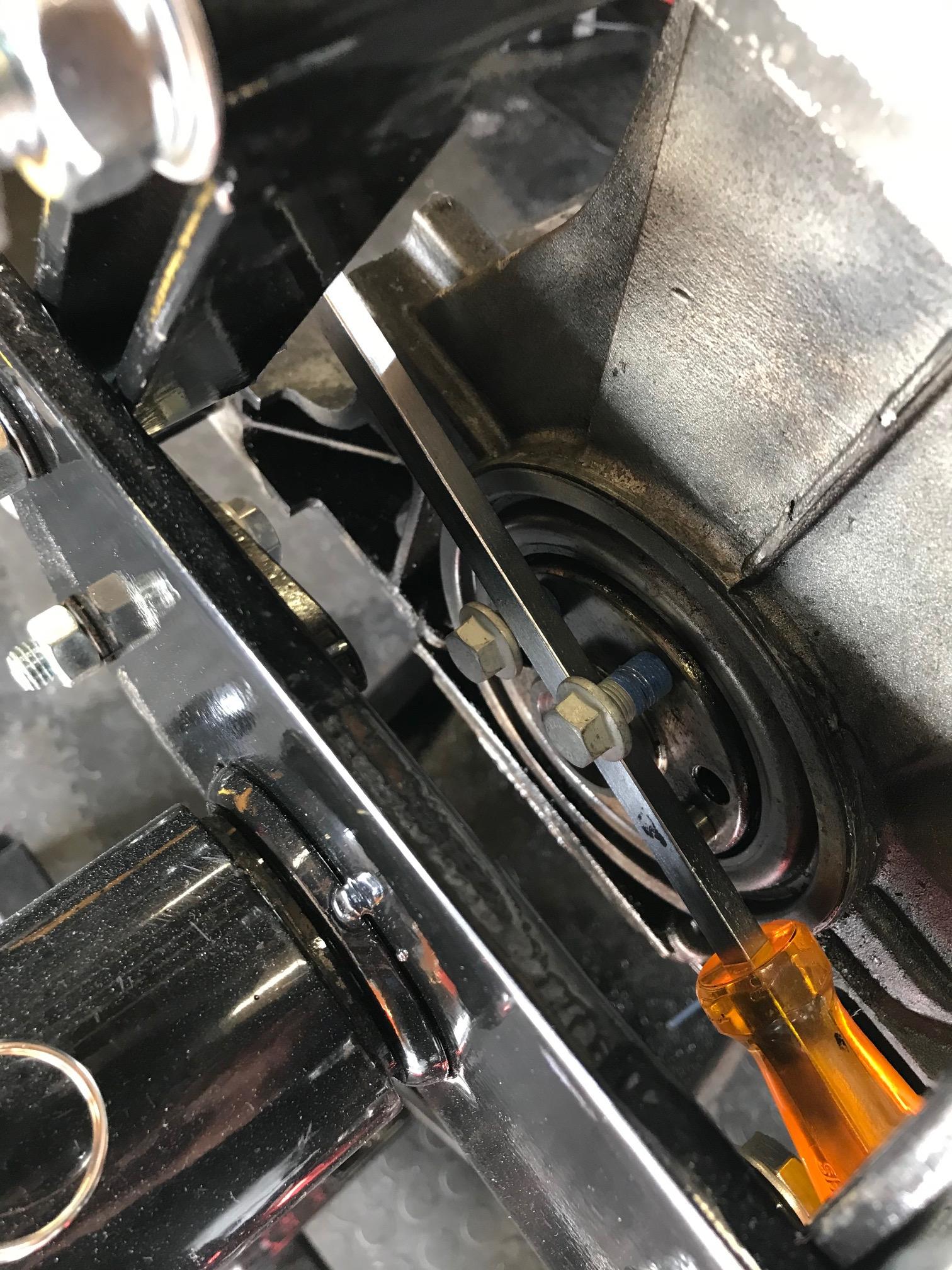 Now I could clearly check the timing marks on the lower pulley (the two dots and the line on the crankcase). 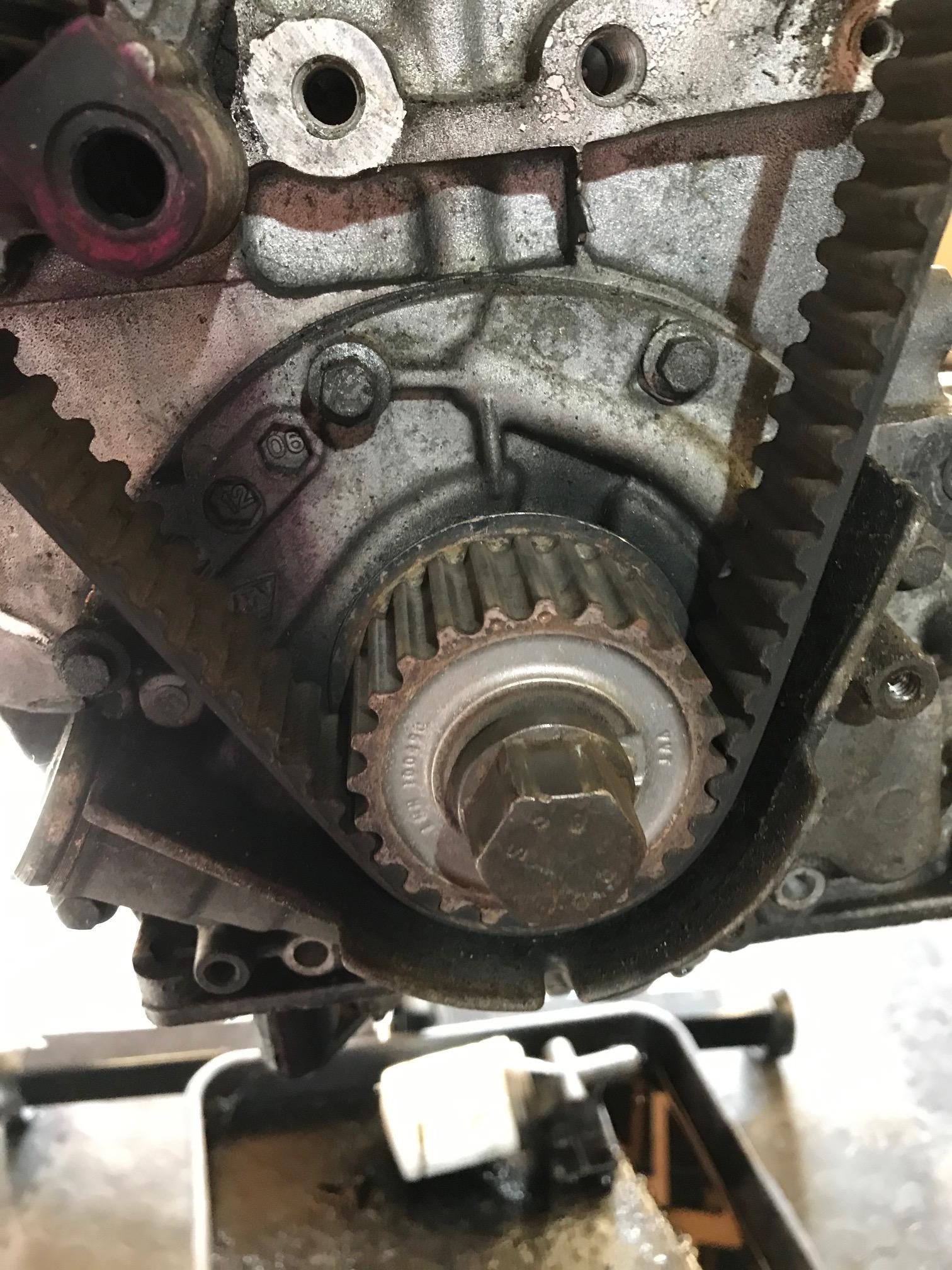 .... and the cams on the correct roll pin and notch in the pulleys. 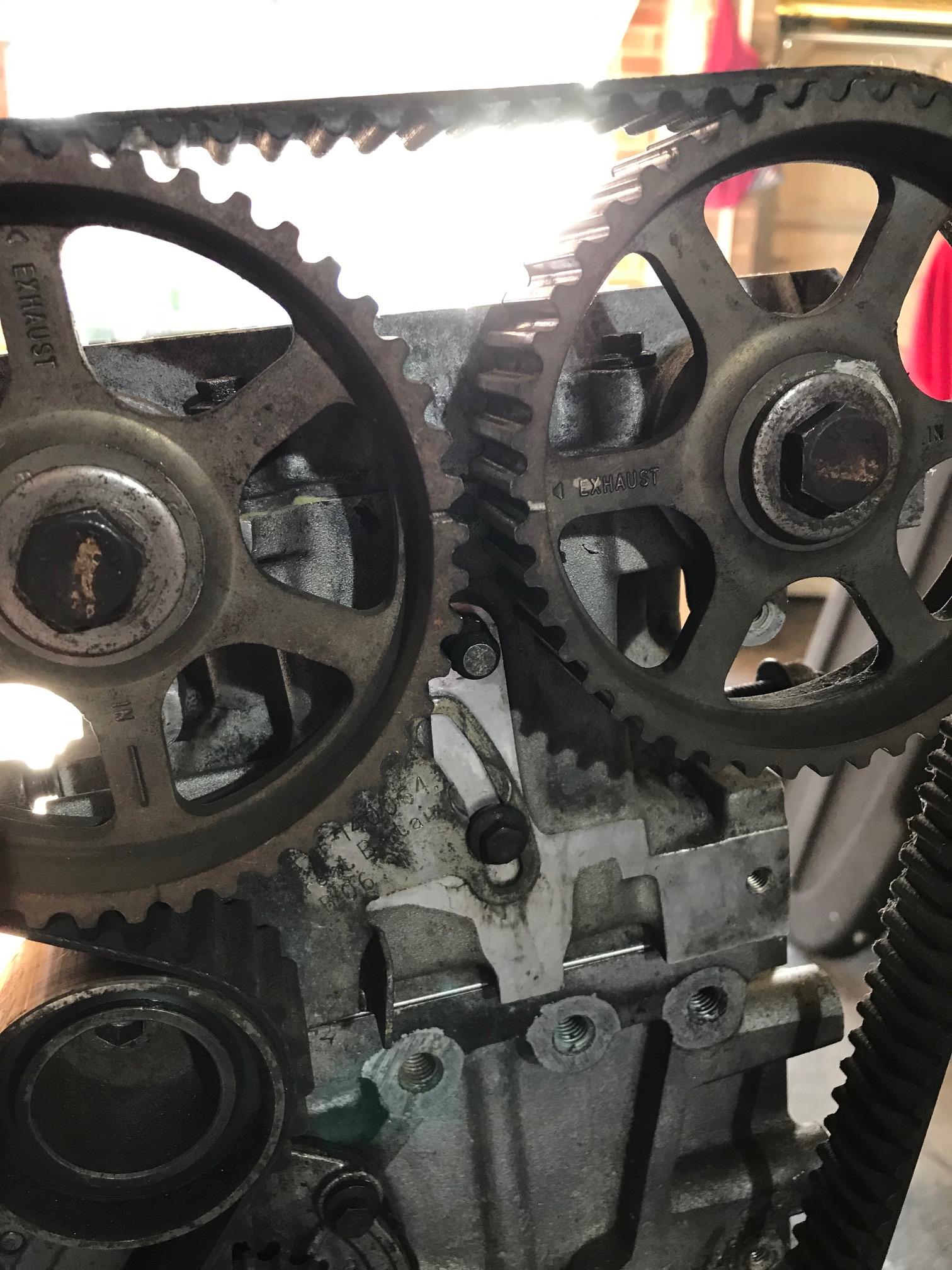 That's all looking good. Next I will lock the crank in it's safe position (which is as shown, all pistons level) and remove the head. Off to the shops to by a socket to fit
Top

A little more progress. I have removed the cam ladder as I know all of the valves need different shims. I want to check if the valves are sealing soon. My plan (once the head is off) if to inject some meths into each port and see if it trickles through. No idea if that's a good sealing test but it's a start.

Everything looked good with the cam ladder removed (using the sequence in the workshop manual and only undoing each bold a bit at a time). There was some gunk (gasket material) in some of the oil channels but none were blocked. It looks like someone has had the ladder off before as there are some marks on the machined face that indicate it has been removed. Nothing of importance, just tell tales. 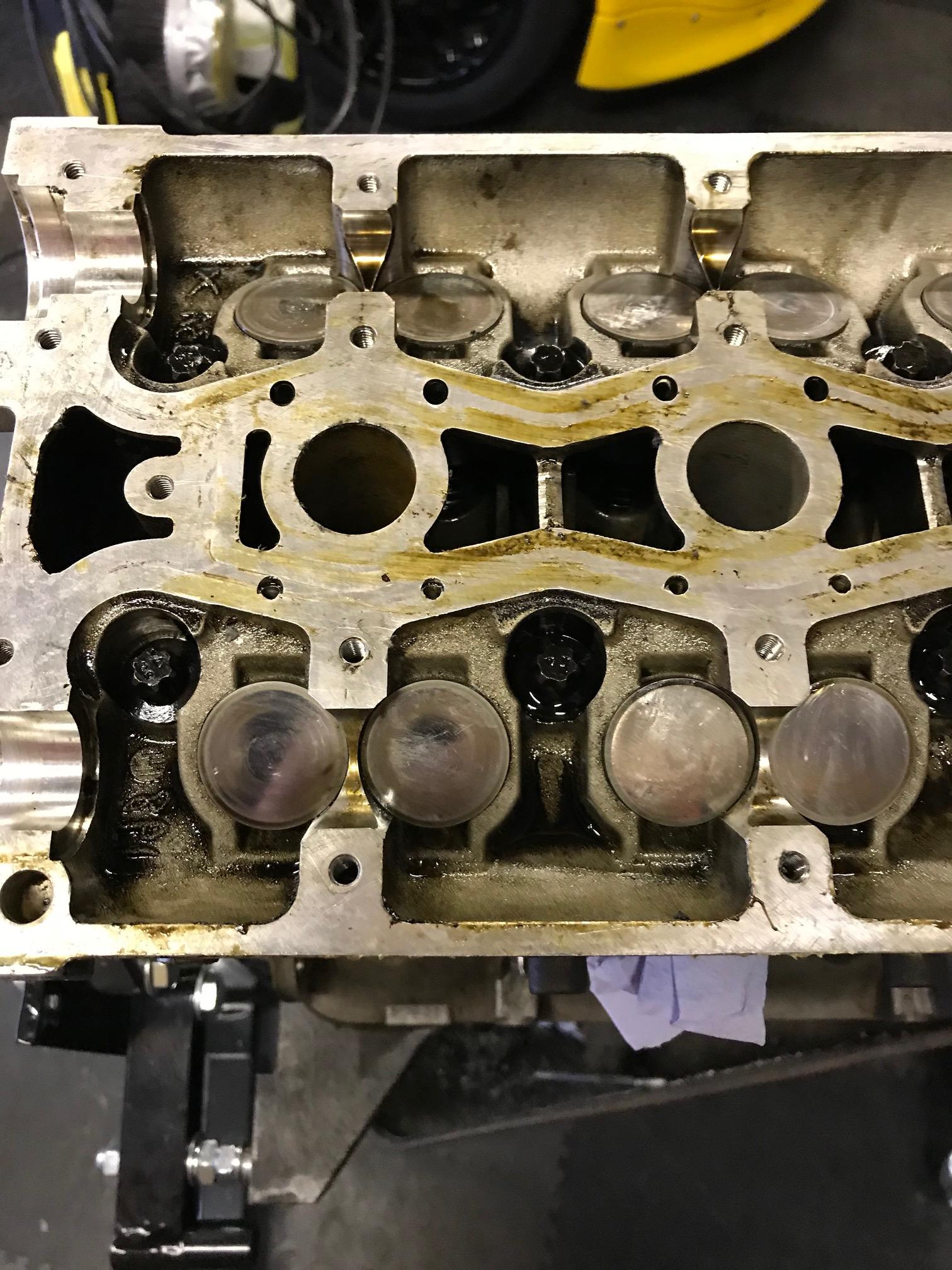 Cam ladder, I have now cleaned the gasket "snot" off and out of the oil channels (this is the before picture) 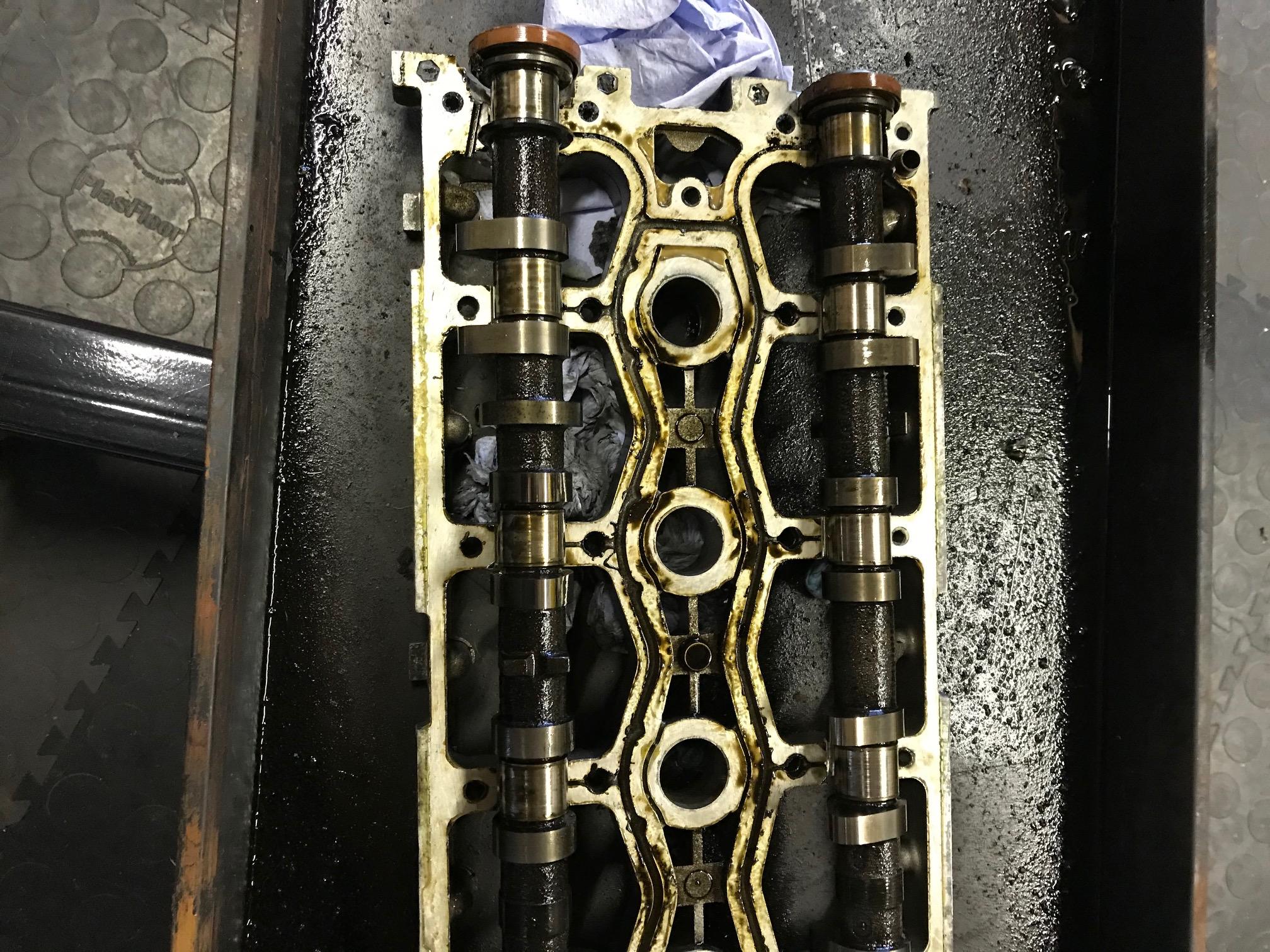 Cam follower and shim. 10mm diameter. No point getting new (thinner) shims until I know the valves are seated correctly. The follower looks dirty but that's just the light on a greasy mark. All the followers, lobes and journal bearings look good. Note the holes in the head which are the oil channels taking a feed down to the follower. Each time the groove in the follower passes the hole it will get a bit of oil. The followers process round so you would expect any wear to be a concave top. They are perfectly flat so no issues. 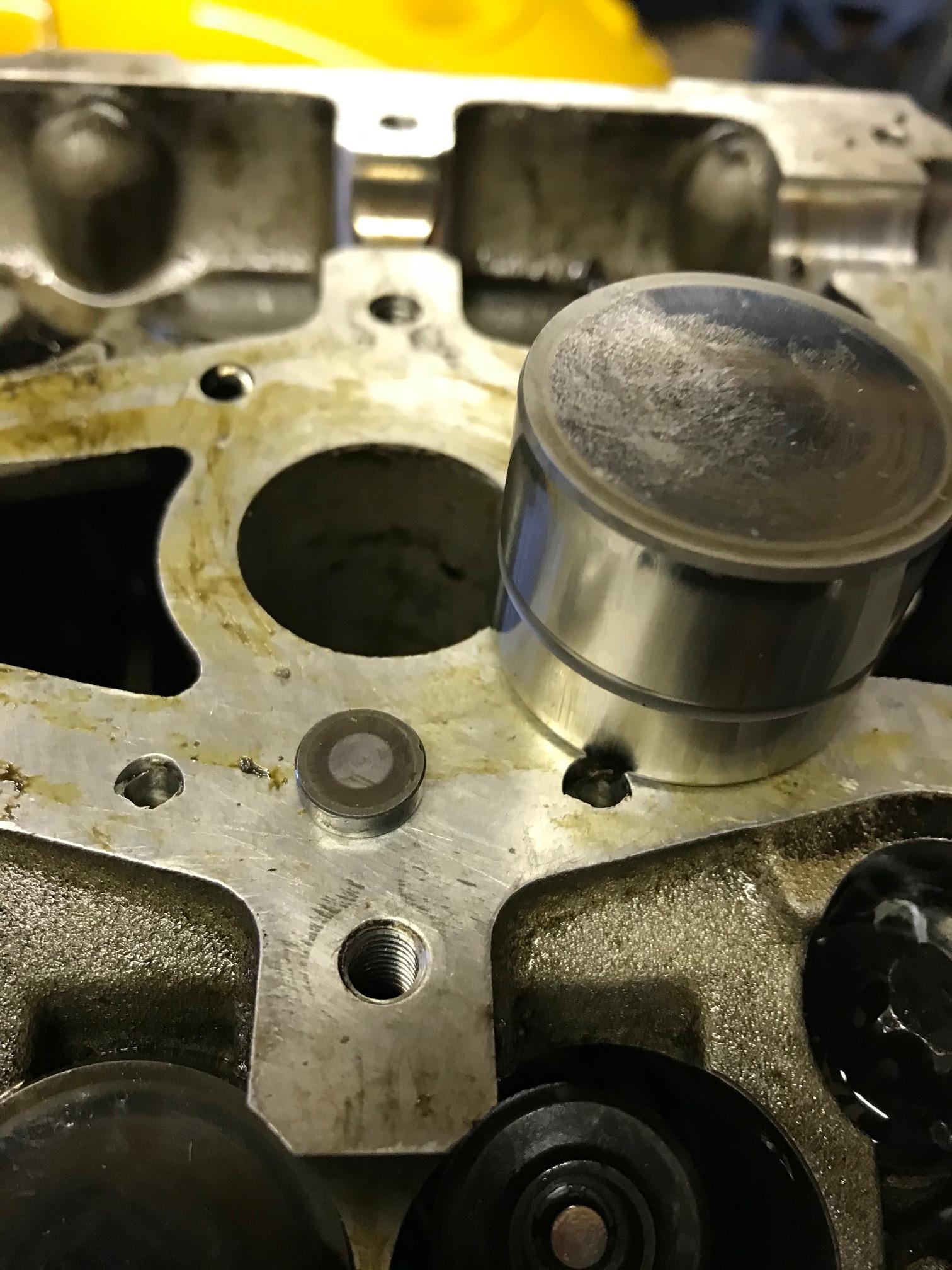 Halfords did not have the Torx E12 socket I need to undo the head bolts, ebay to the rescue.
Top

Checked the liner heights and they are ok. I just put a steel rule across the liners and measured the gap underneath with a feeler gauge. 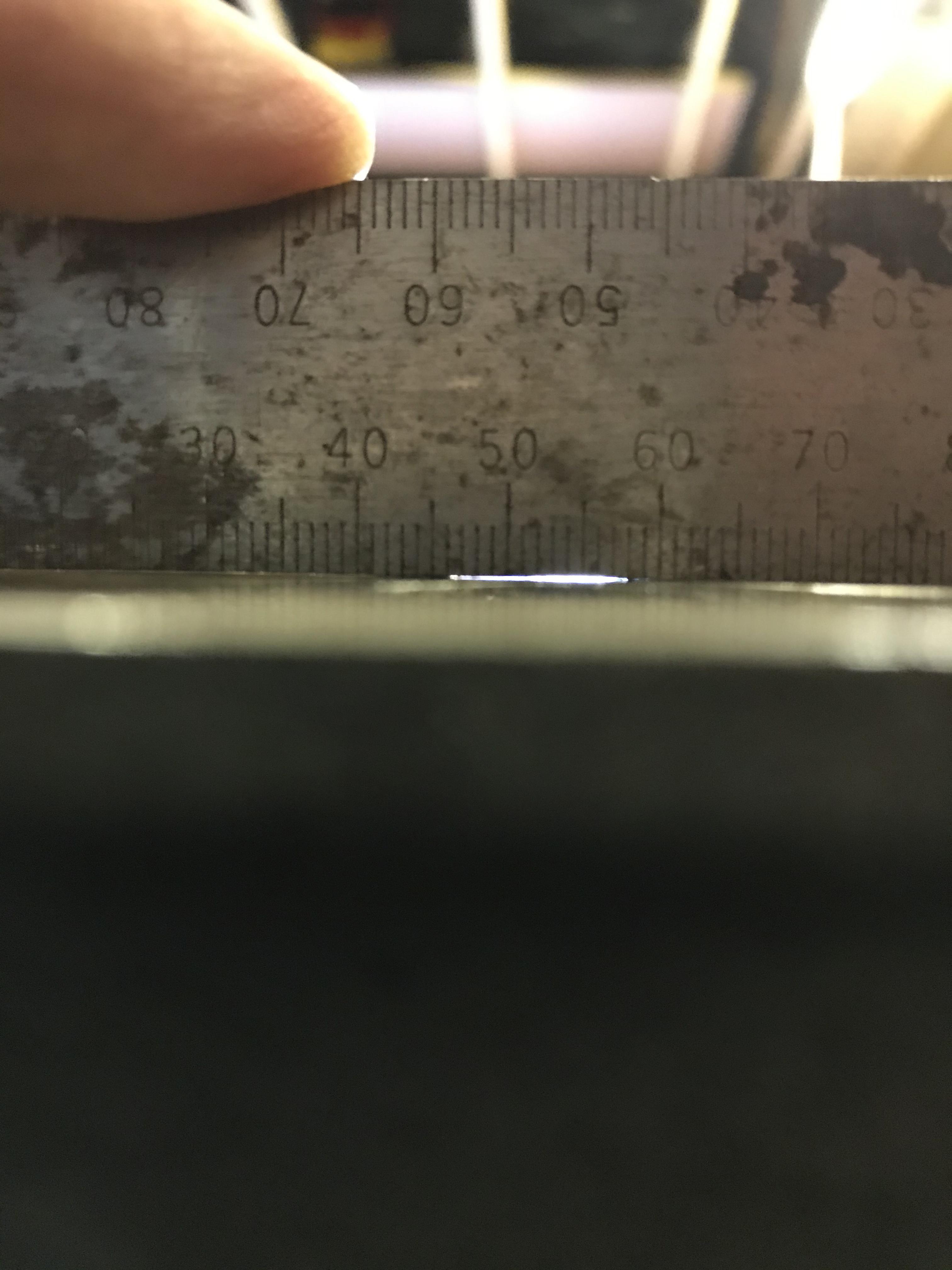 So all is well but I do have some marks on the bores which Dave Andrews tells me should come out with very fine wet and dry. I’m going to go that and then clamp the liners in place and rotate the crank and check the full depth of the bores.

The valves do not leak. I filled them with meths and nothing trickled past them. I plan to remove them as the exhaust ports are full of soot so I can give the head a good clean.

It’s coming to decision time on what to do. I’ll most likely just loosely reassemble the engine as it’s intended to be a spares donar. The other option is to build it as a really good engine but I think that’s a waste of time and money unless it is planned for imminent use in a car.
Top

Went into the garage today planning to clamp the liners into to block so I could rotate the engine. The normal method appears to be to use the stretch bolts that hold the head in place with some big washes and a bit of copper tube the height of the head to hold the liners still. I found it did not have any suitable washers. Then I realised I could turn the engine over on my stand and check the bottom part of the liners from underneath. They are unmarked. All the minor marks are in the top and they should rub out.

As Gavin has advised he has only seen one Lotus that had problems with the bottom end, I am going to declare it fit.

Next I want to check the valve seating again. According to YouTube (so it must be true) a good test is to fill the head with a fluid (water, I’ll use meths) and blow high pressure are onto the back of the valve and look for bubbles. You can buy cans of high pressure air. If that’s ok there is no point taking it apart.
Top

Bored today social distancing in my garage. I have checked all the valve seating by filling the head combustion chambers (with the head upside down) with de-ionised water and then shooting bursts of compressed air on to the back of the valves, no bubbles so they are well seated. I have removed the little carbon and soot there was from the exhaust ports. Giving the head a careful inspection there are two scratches on the face. Dave Andrews thinks they are not too bad and can be linished out, no need for a skim. Someone has been clumsy with the head when it has been off before and scratched it.

It's now back in one lump and I know it definitely needs new cam shims, the head might need linishing but is probably OK and the liners could be changed as they have some spots on them but they are perfectly smooth. Given the engine is a donor spare for my Exige I'm not going to replace all the bits. I have reassembled the engine with lots of corrosion protection, it's all gentle assembled as it will need new gaskets. JOB DONE.
Top