That's what I figured, ie. that your pulleys are right for the additional 190 slot but it's the camshaft which is rotated to the wrong position.

But that doesn't fit with the picture posted by deggles of standard timing, since the roll pin is in the 190 slot on the pulley...or am I being thick?

Btw, where in Derbyshire are you (PM if you don't want to post here)? Only I have an idea I'm not that far away...
Top

I live just to the north of a Derby, in the posh bit!
Top

Confirmed today that my engine has the exhaust can wheel on the wrong roll pin. 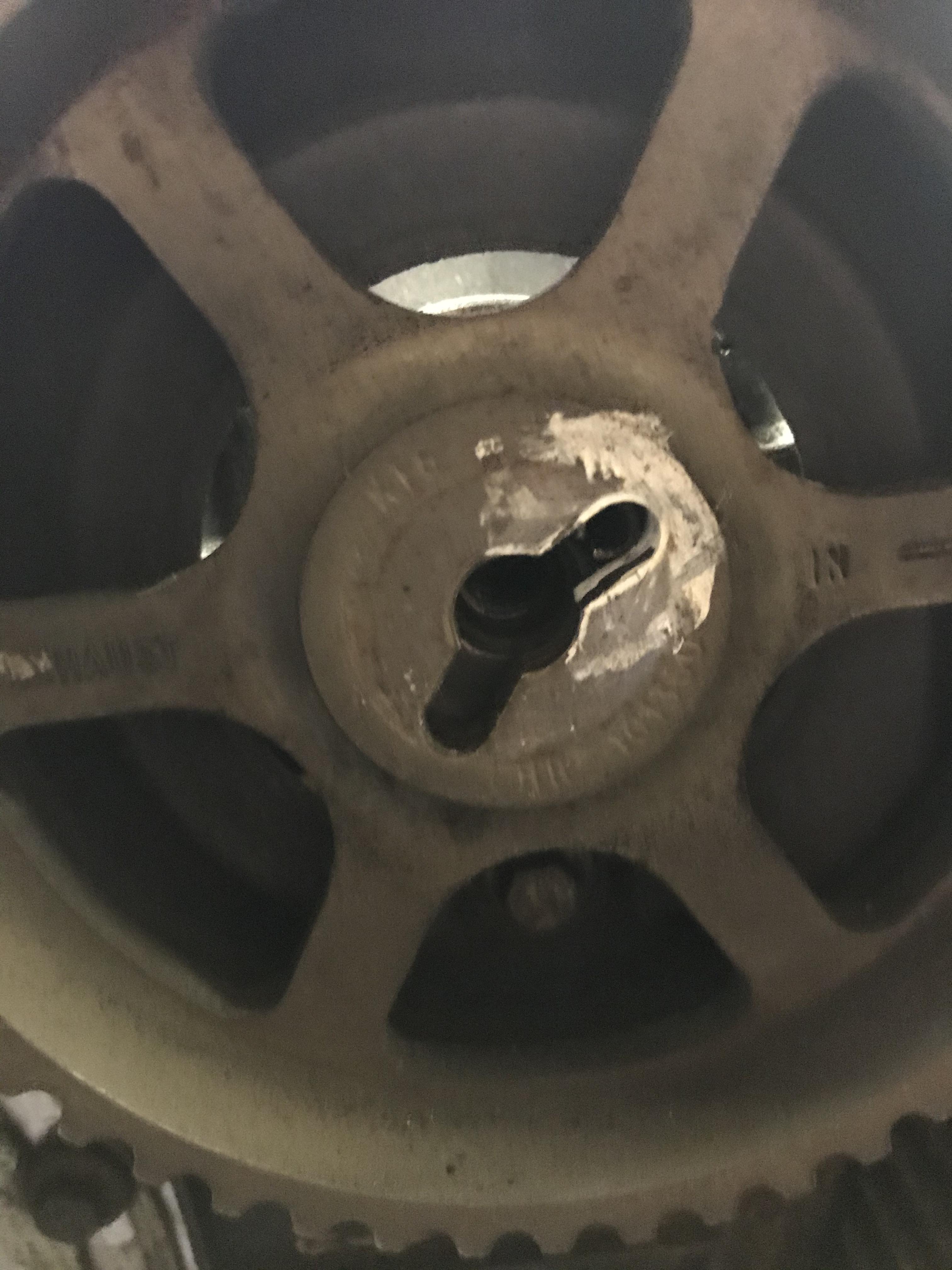 It’s not clear in the picture but the roll pin should be in the slot close to the label “exhaust”.

The inlet is in the correct slot. 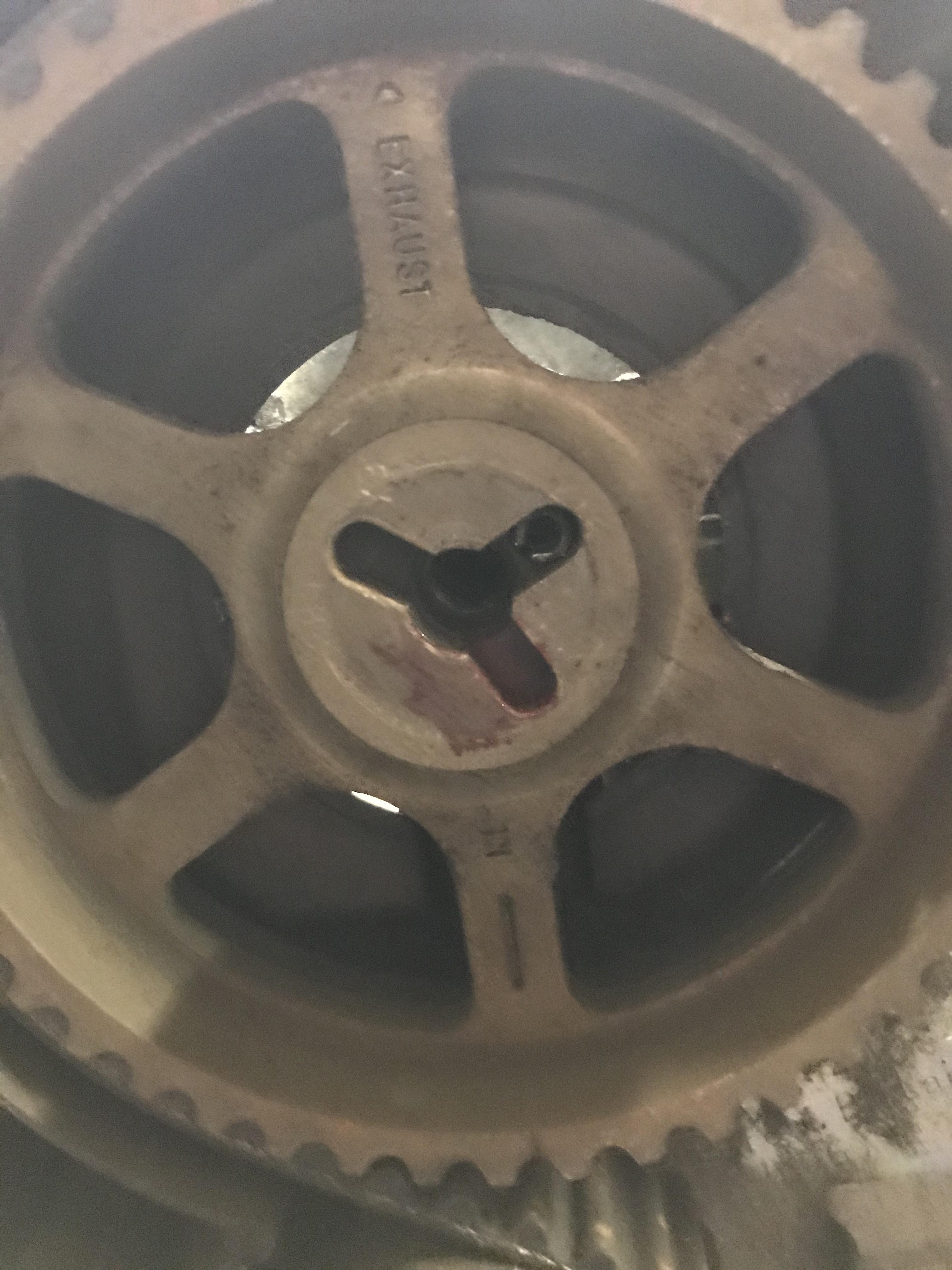 I have moved my exhaust cam and all looks much more sensible but with one big lesson.

I aligned the crank pulley with the 12 o'clock mark, ignore the TDC marks on the cam belt cover marks. 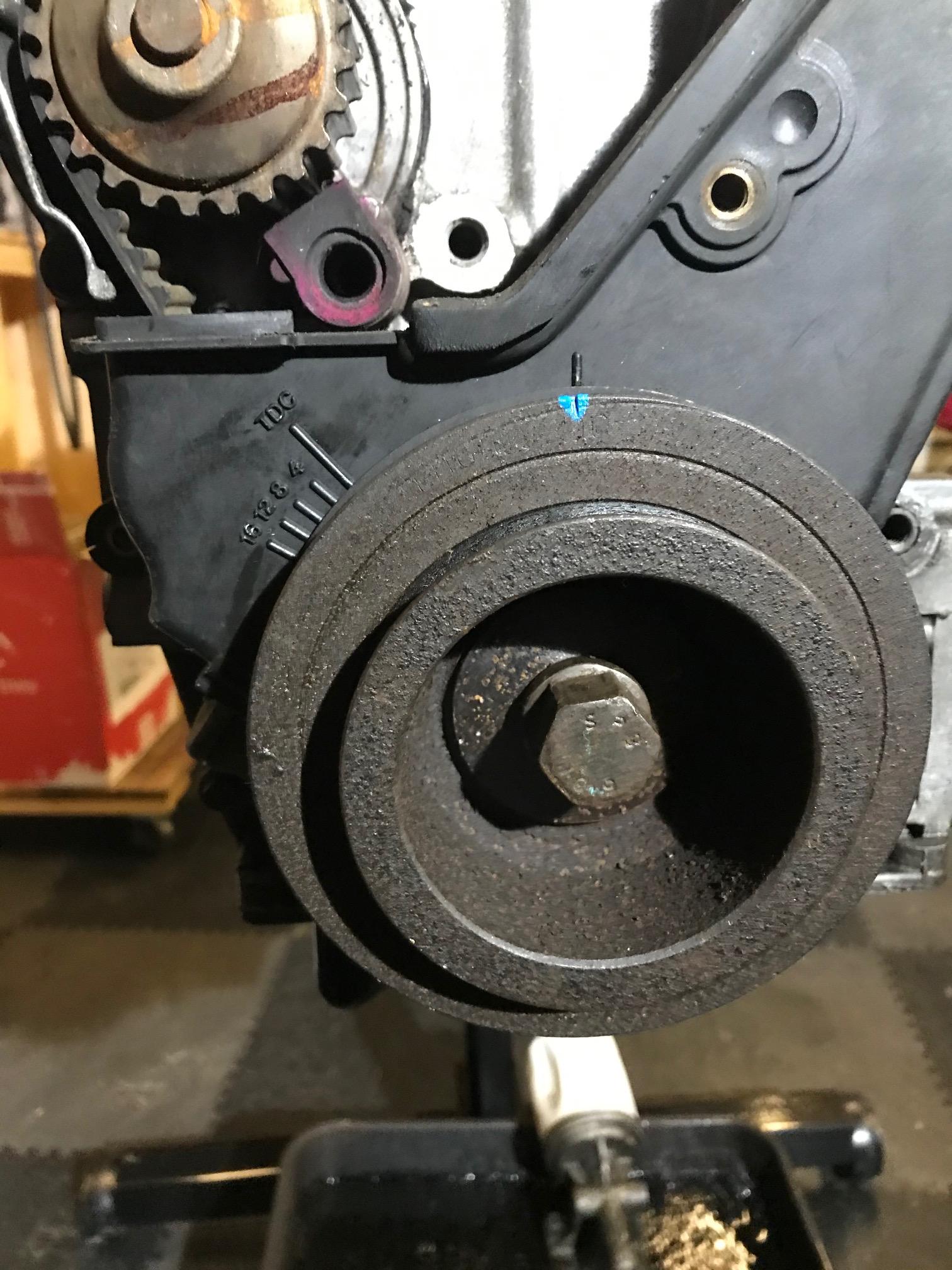 Pulleys lined up with the pulleys on the correct roll pins! 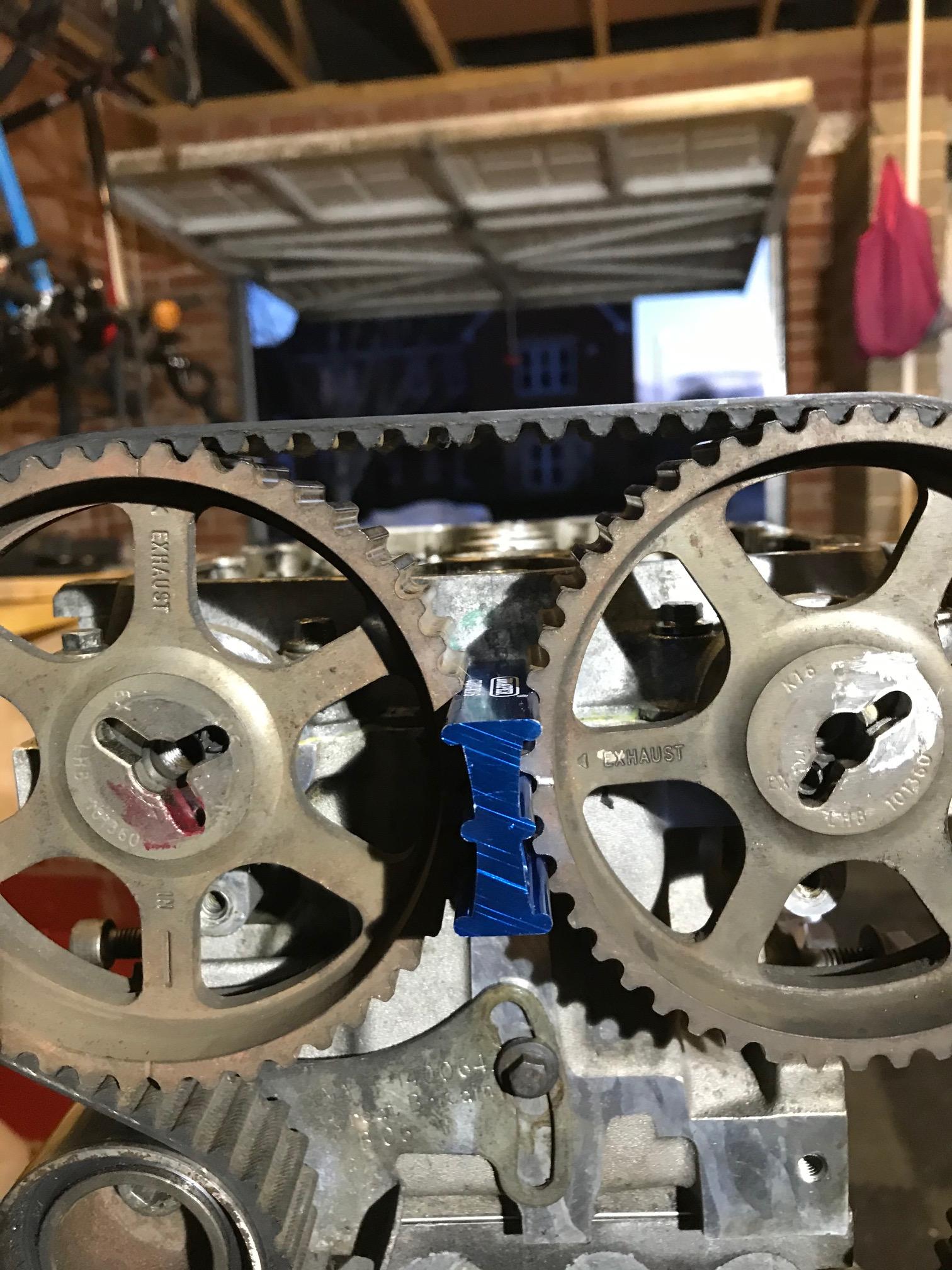 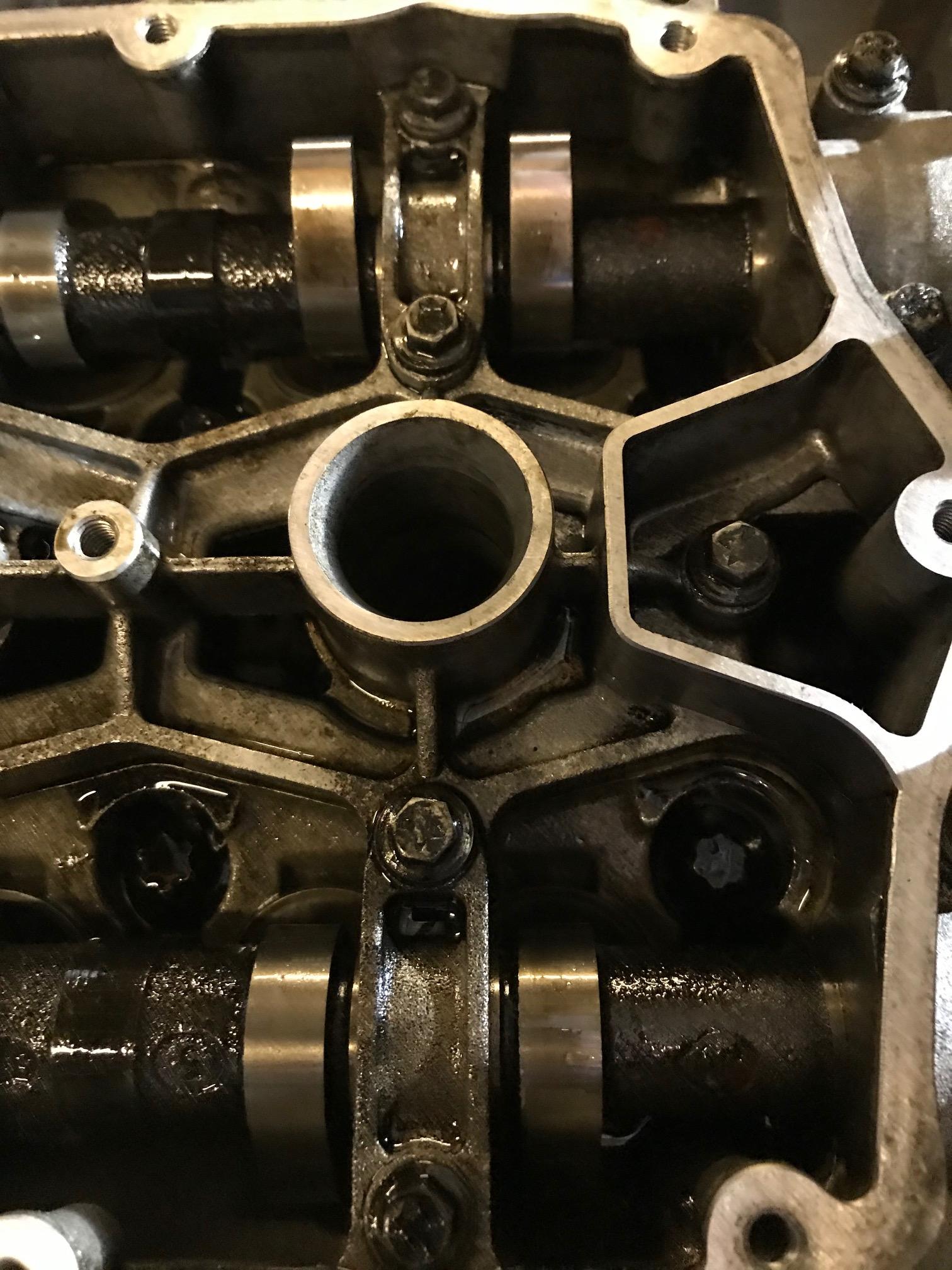 Using a very long (smooth) stick I removed the plugs and expected the engine to be at top dead centre, two of the pistons at the top of their stroke. It turns out that the timing mark at 12 o'clock is at 90 degrees before top dead centre (BTDC), known as the safe position, where all four of the pistons are at the same level (though two are going up and the other two going down).

Next step is to get that pulley bolt off, it's putting up a fight. I hope to get some metal work next week so I can attack it.
Top

What size is the bolt head? Only I have an impact driver that needs exercise..!
Top

I have tested my impact driver on it with no success. I'm seeing Gavin on Monday to service my S1. I'm hoping he has an old flywheel that I can take away and fit to my engine. Then I can really jam the crank and hit it with the impact driver. At the moment its bouncing, I'll keep you posted, thx.

After a bit of searching and talking with a Gavin at Unit 4 today I have learnt that once the head is off, if you try to turn the crank over you will lift the liners and they will have to be reseated and sealed. Gavin also advised that he has never seen a Lotus with a damaged bottom end so don’t touch it. I think I’ll remove the head once I have the pulley off do the shimming myself. I have advised Gavin that I may end up bringing him a bag of bits to be reassembled.
Top

I think I may have mentioned the liner issue a while ago...


tlracer wrote: ↑Sun Jan 05, 2020 8:39 am 1) Yes, the long through-bolts sandwich the whole assembly together. There's been a massive amount written over the years about these and the construction method, its effect on liners, etc.
2) The 190 pulleys are the standard units, with an additional slot machined into the inlet pulley. As such it has the same numbers visible on it. Removing the bolt & washer will uncover the 'new' slot, if it's there. 190 upgrade usually had other parts fitted too, eg. 82 degree thermostat, which might be an easier-to-see clue.

I did not really appreciate point 1! I do now. I'll have the crank clamped before the head comes off.
Top
Post Reply
53 posts