This is where we proud owners can upload information and pictures of our pride-and-joys (their Exige that is..)
Post Reply
1044 posts

I've always been put off sprinting by how brutal it seems on mechanicals - maybe Blyton did push the limits from a cold/standing start that might otherwise have been fine on a normal track day? Hope it's a straightforward fix for you anyway mate.
Top

Thanks Gents, appreciate the sympathy but it is just a toy car after all. I've pushed it a little further than I should have done, and despite best efforts it just didn't work for me.

I've had the box stripped today and there's no real good news unfortunately. The failure was in the aftermarket output shaft, which came part of the Kaaz final drive kit. 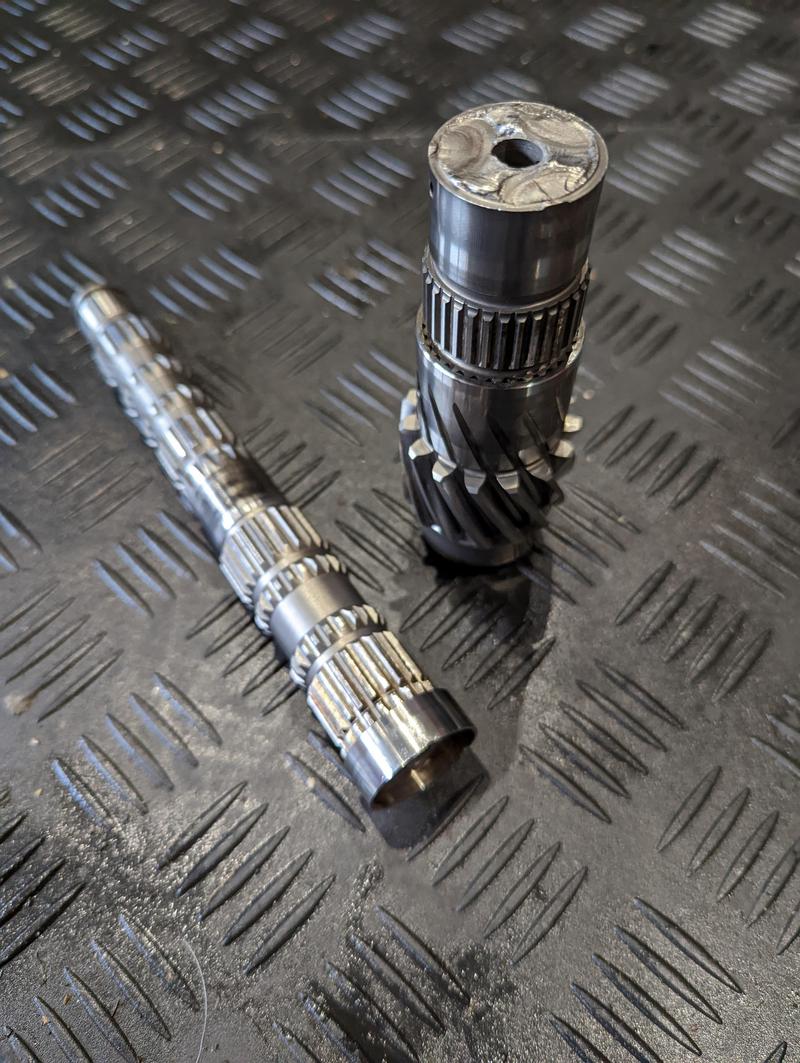 As soon as we started stripping the box it became apparent that the shaft had broken. It just wobbled around like mad as soon as 5th and 6th were removed. 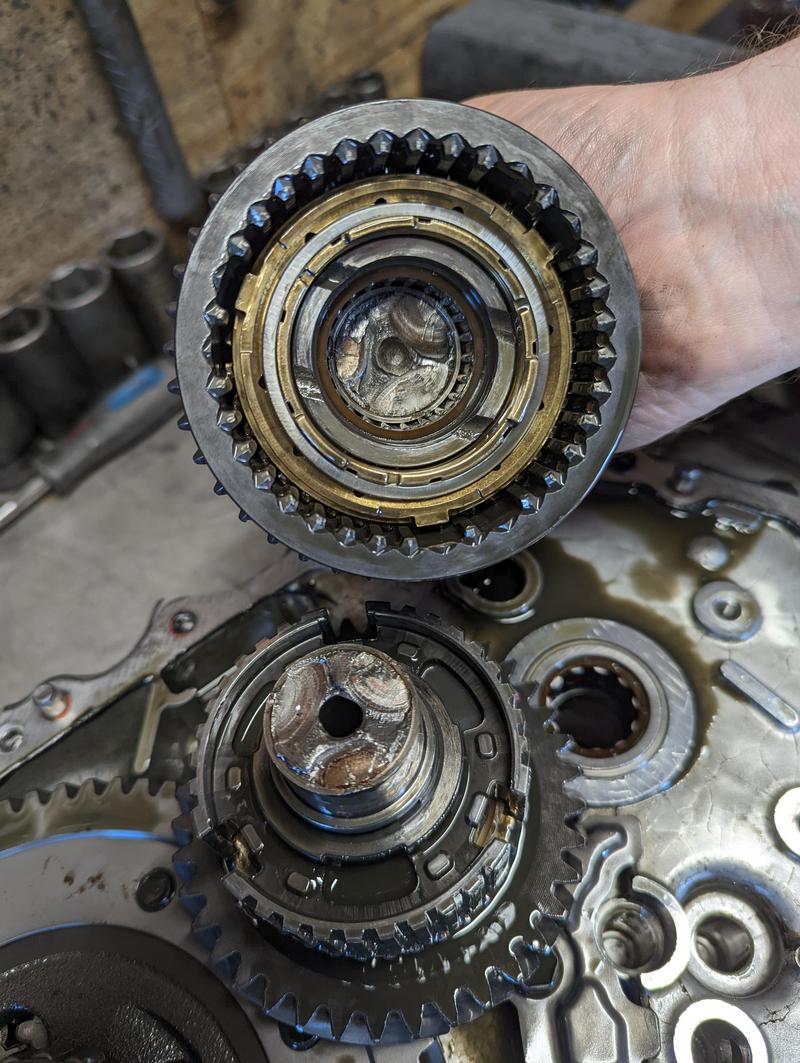 The carnage is minimal, but still enough to effectively write-off the gearbox. I went to visit the rebuilder with a donor gearbox in my boot, the hope was that if my 3rd, 4th and Final Drive (the expensive bits) had survived, then I could transplant them over and try again in a new box. 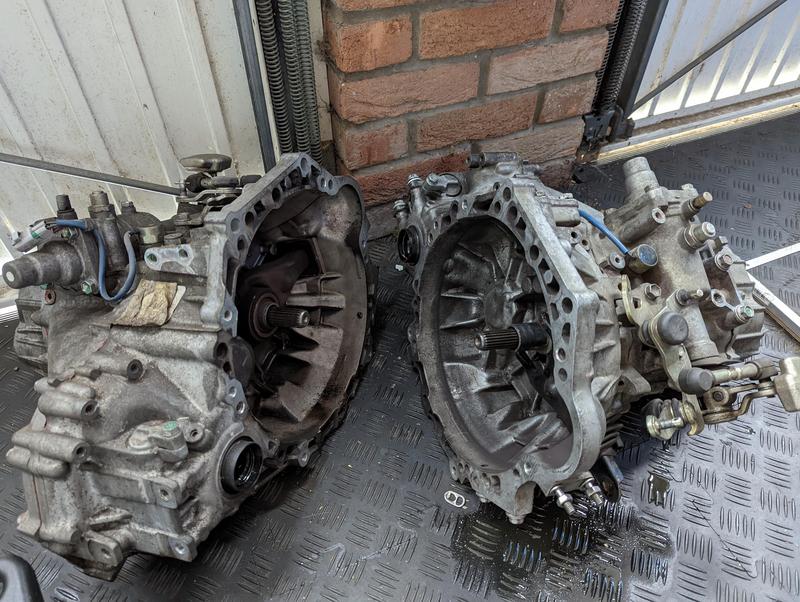 The 3rd and 4th survived, they look completely unscathed - but the FD is obviously written off, and we mutually decided that I could risk reusing the diff as we'd never really know how much crap it had ingested.

Considering the cost to strip the donor box, replace the single use items and rebuild with the 3/4 - it feels like throwing good money after bad. Although I'd like to sleep on it a few more times, I think the decision has been made to put a completely unmolested standard box back in the car instead.

a) Detune the car and run it happily within its comfort zone? This is likely to lead to the sale of the car, readers will probably appreciate that the project element of this car is most of the enjoyment.

b) Run it as is, with a standard box. I might get 2 laps out of it, I might get a decade - it's anyone's guess. In the name of science, it would be interesting to find out because if a standard box would last me a decent length of time, then it's not totally out of the question to treat them as consumables.

The way I'm feeling, all signs are pointing towards detuning and selling on. I wouldn't want to sell it running 300bhp without an uprated box, but if I knocked it all back a bit and got a comfortably 260-270 out of it, it'll still be a belting car - but it just won't have the project ceiling to keep me entertained for long.

In hindsight, running the standard box to destruction is absolutely the thing I should have done. I may have ended up with a failed gearbox sooner than I have but at least I wouldn't have lost the better part of £3k (probably closer to £4k including rebuild labour and extras like the oil cooler) in the process.
Top

I do think you did the right thing in trying to future proof and build a strong car, is there any history online of similar failures of that part? Seems like it is one of those really unfortunate unforeseen failures. I know you did a lot of research and careful decision making before you went down this path so you could drive the car how you wanted with peace of mind that it wouldn't leave you at the side of the track. It seems so unlucky that this is what ended up happening anyway!
Top

Option B is where I would be at right now. At least with the cooler gearbox oil temps due to the cooler it might last longer.

You do love a gearbox hokey cokey dont you ?

Ultimately I would look to source an alternative to the Kaaz and get that fitted. This must have been a one off, surely?
Top

I'm flipflapping like mad. One minute I'm all up for sending it at Croft on a standard box (with cooler) and seeing how much fun I have.

If I strip a gear, hey ho - £500 and another 5 hours of my time down the pisser... but I've just spent more than that on Nankang tyres, so it's not bad in the grand scheme.

If it survives, and I have decent fun in a car without an LSD - then maybe I keep going for a bit.

Next minute I'm updating all my wiring documentation in preparation for pulling out the dash, ECU and returning it to the Lotus 260 map.

Waiting on a couple of gearbox sundries to arrive, so got a day or so to make my mind up before I start work.
Top

just catching up on this.. sorry to hear this Kyle - I too thought you had built the strongest car possible.... I hope you decide to keep it - but I do understand your quandary....
Top

Third option for me, rebuild the existing box with the good bits as you have intended it to run. I think you were just unfortunate.
Running a standard box would be niggling in my mind every gear change, incase it breaks.
Top

johnfishcurtis wrote: ↑Mon Jun 20, 2022 8:23 pm Third option for me, rebuild the existing box with the good bits as you have intended it to run. I think you were just unfortunate.
Running a standard box would be niggling in my mind every gear change, incase it breaks.

Yeah I'd love to do that, but it's going to be close to another £3k, bringing total gearbox spend to nearly 7. It's too much, need to know when to stop throwing good money after bad, and admit the 2zz drivetrain isn't going to keep me entertained.
Top

To be honest, it really does sound like (without sinking more cash into it and then hoping for the best) you're not going to find the thrill you're looking for from the platform now...

I must admit I do keep looking at Caterhams - seems like a big thrill for not a huge amount of cash, and can be reasonably reliable from what I've seen? Is there anything on your 'what next?' list that would light your fire?
Top

matt447 wrote: ↑Tue Jun 21, 2022 11:00 am To be honest, it really does sound like (without sinking more cash into it and then hoping for the best) you're not going to find the thrill you're looking for from the platform now...

I must admit I do keep looking at Caterhams - seems like a big thrill for not a huge amount of cash, and can be reasonably reliable from what I've seen? Is there anything on your 'what next?' list that would light your fire?

My "what's next" list is quite varied, and keeps changing.

But, if you allow me to indulge...

Obvious answer seems to be the V6 Exige, the aftermarket/modification scene for them is really taking off now - and I could potentially still have some fun with some of the geeky stuff I've started on the Exige regarding canbus and gadgets. I'll be honest though, I see one next to an S2 - and the S2 tweaks my trousers the most. Personal preference, but I find myself getting drawn in to the expensive/exotic end of the V6 range to allow me to overcome my S2 fetish.

Caterham is a very real consideration, I've wanted to build a kit for as long as I can remember. It's not without its downsides though, it's a proper fairweather car - wet/cold trackdays really would be miserable even if I am now an established tower! This sounds petty, but I also feel like they arrive "too built" for me, seen photos of delivery day and it's pretty much a whole car being dropped off with a dozen boxes! Bolting on some wishbones and seats isn't my idea of building a car, but I'd like to think I'll find ways to make it more involving/difficult for myself. Buying a prebuilt Caterham has zero interest to me.

Had a half hearted look at Ariel Atoms, serious bit of kit - and fantastically put together. I feel like they're a bit beyond my driving ability though, the Exige is pretty knife-edge as it is, and the Atom is just all of that on steriods. The Caterham appeals because I think I could achieve comparable laptimes whilst advancing my driving at the same time.

Another contender was the Lotus 211 that's currently on the market. Not sure I could get my car fixed and moved on quick enough to move on that specific model but the idea of transplanting all of my "bits" onto a platform that's almost identical did sound attractive. "But it still has a 2zz/c64" I hear you cry, yes it does - but a 211 running a comfortably 260bhp would be more performance than I have today. Maybe I could keep it relaxed, and still get what I want from it. I then get to thinking that a 211 is all the bad bits of an Exige plus all the bad bits of a Caterham...

It's a massive stretch, but if I could run an Elige and a Caterham concurrently, I think that would tick all of my boxes. Treat the Caterham as the 'extreme' car, push performance on that and make it my perpetual tinkering project. Run the Elige at a comfortable level of tune, and just run it whenever it's cloudy. (or whenever the Caterham is broken)
Top
Post Reply
1044 posts