This is where we proud owners can upload information and pictures of our pride-and-joys (their Exige that is..)
Post Reply
365 posts

Yeah I'm not on a serious weight-saving hunt quite yet... but high and back is certainly where I would start.

I have the full roof scoop from JS, it's not carbon but i'm fairly sure it's a little bit lighter than OEM (helps that it doesn't have head lining) but I'd be interested to find out.

My biggest issue with carbon is that I don't like the aesthetic of it (I should hand in my petrolhead card, I know). I mean it looks great on the exposed parts of a McLaren chassis, or on the shaped wishbones of an F1 car - but when it's just a replacement part for a bit of plastic in a road car it doesn't quite have the same appeal. What I do like is when it's painted over in body colour, with the odd bit left exposed in a hidden area just for those that 'know'... The 260 cup clam/roof absolutely nails it for me with that strip down the middle.
Top

ade wrote: ↑
Tue May 19, 2020 8:28 am
If you really want to save weight high up the roof and boot lid is where you should start, from memory there is over 12kg to save there, finding carbon roofs and boot lids now is tough though if you want genuine, there is a thread somewhere when I did mine with weights etc

There is a chap on facebook that produces the wings , bootlids , roofs , access panels , side pods and cowls ..

See if I can dig him out ( this is why facebook is poor. You simply cannot find information easily .. ) 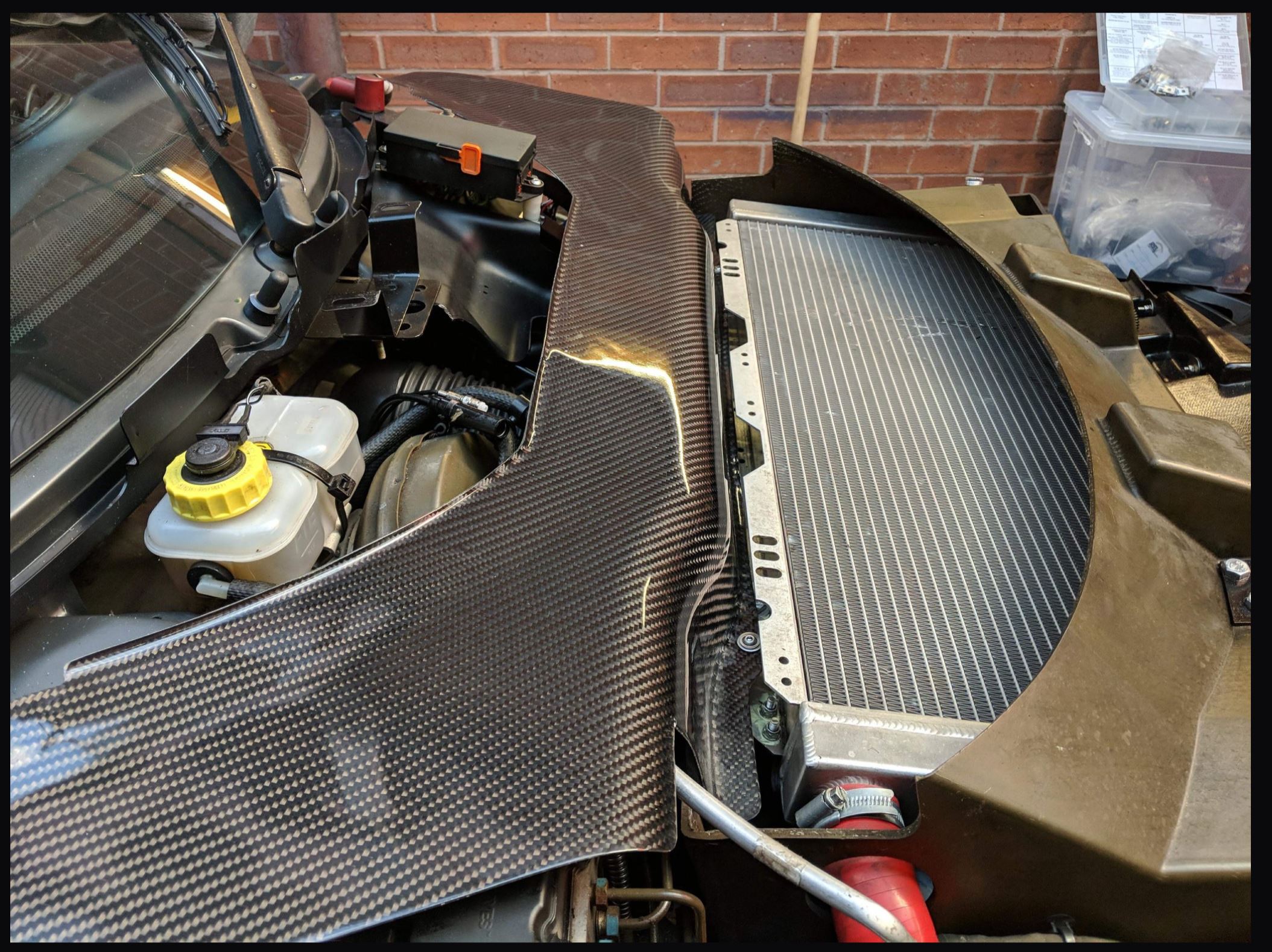 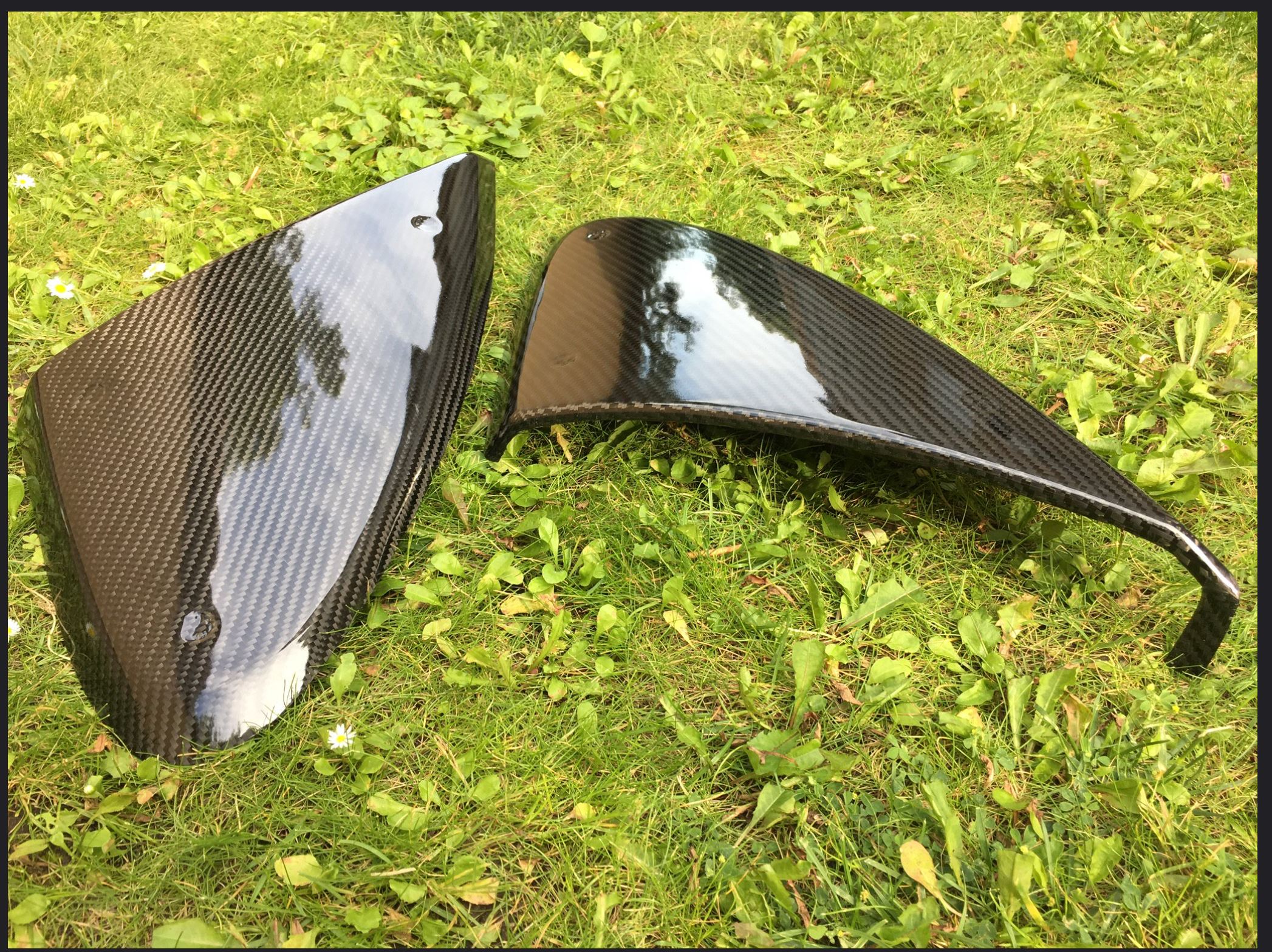 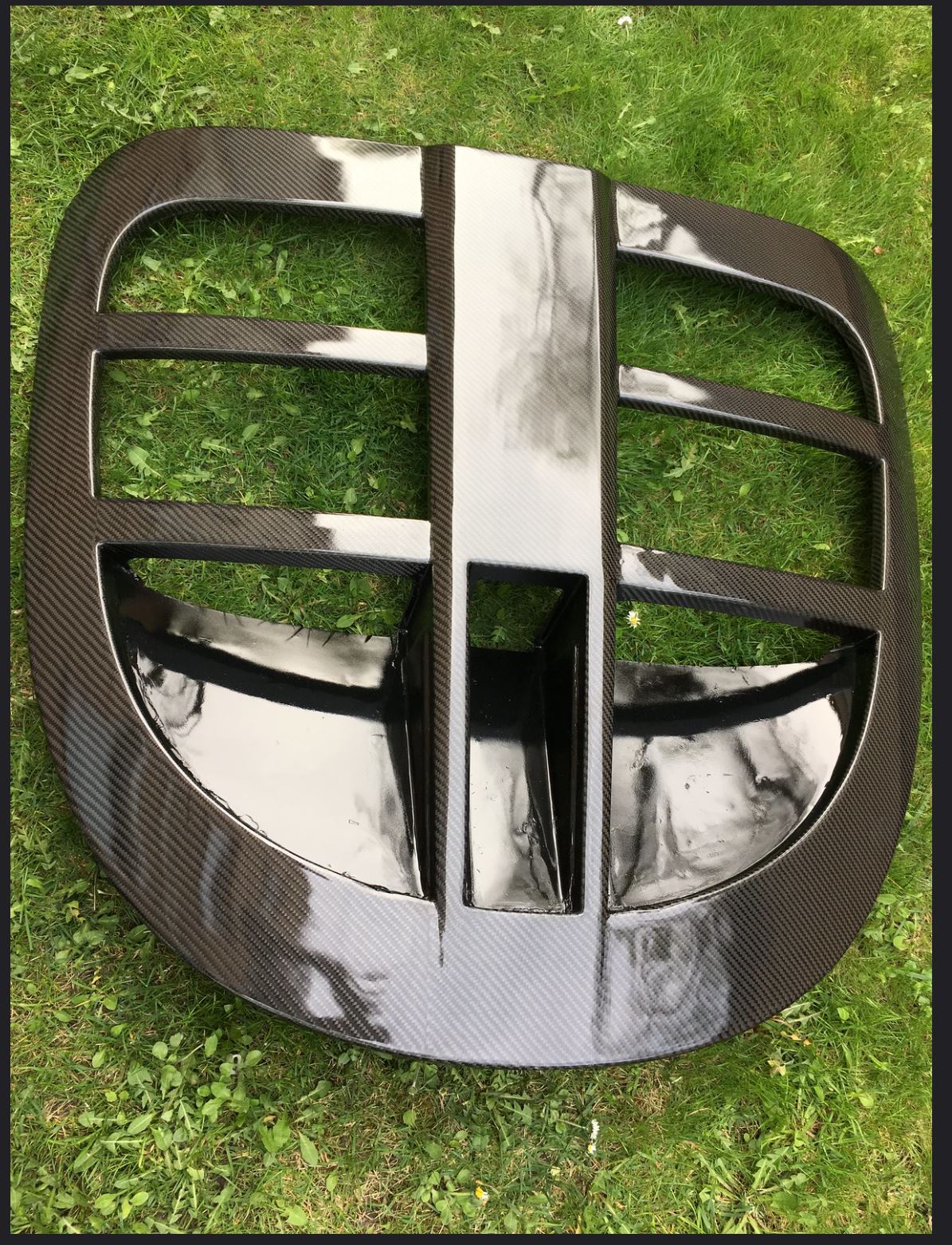 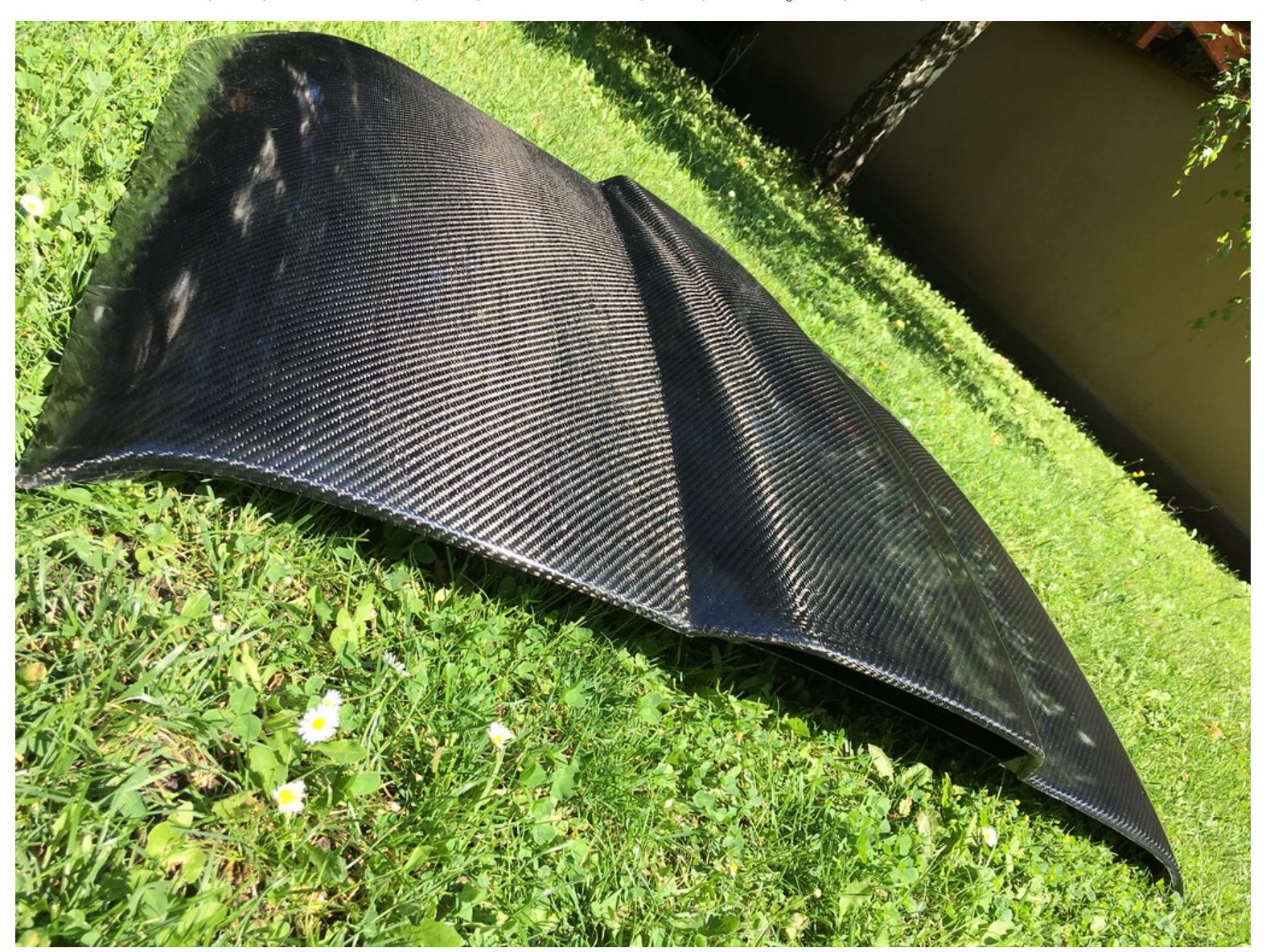 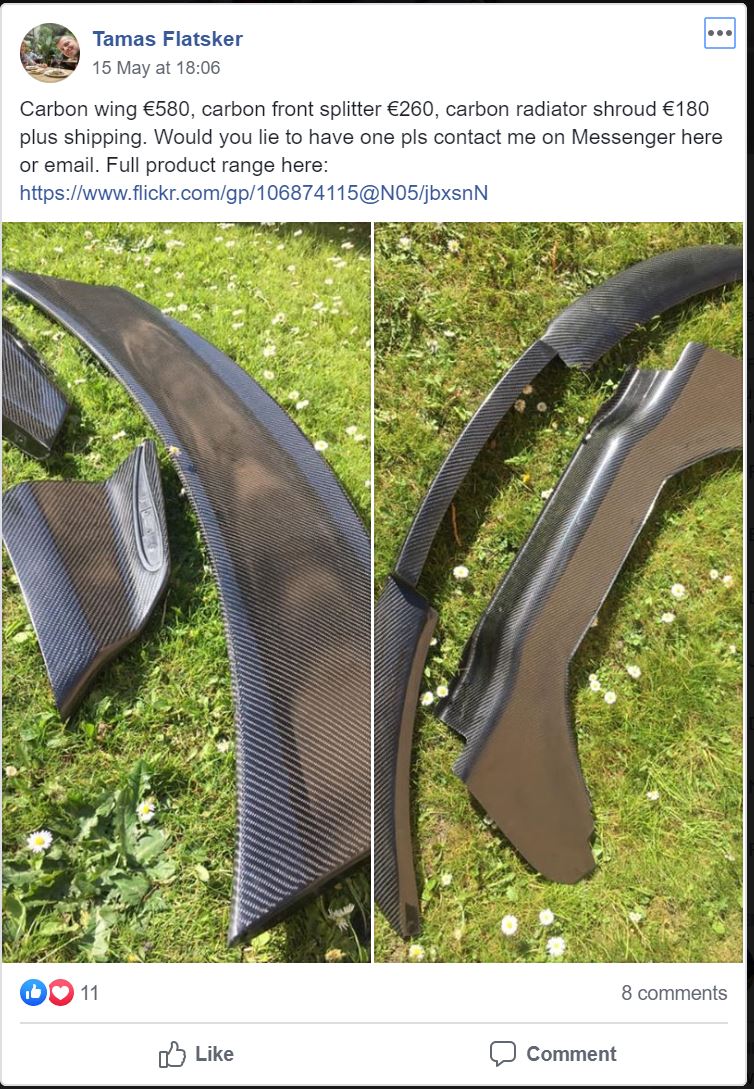 I've seen that guy and at a first glance his stuff looks OK - but really struggling to track down legitimate first hand reviews of his stuff. Seen one FB thread which went downhill quite quickly because he shipped some stuff (to the US maybe?) and it arrived broken, but he just cut all comms so the buyer is out of pocket.

For stuff like this I really do think I'd need to see it in the flesh first. It's a lot of $$
Top

Fonzey wrote: ↑
Tue May 19, 2020 9:02 am
I've seen that guy and at a first glance his stuff looks OK - but really struggling to track down legitimate first hand reviews of his stuff. Seen one FB thread which went downhill quite quickly because he shipped some stuff (to the US maybe?) and it arrived broken, but he just cut all comms so the buyer is out of pocket.

For stuff like this I really do think I'd need to see it in the flesh first. It's a lot of $$

Thats a shame. I missed that.

Agree on the review thing.
Top

Nothing much to report on the hands-on front, other than I swapped my spoiler fixings over.

Looks like they had been molegripped last time the spoilers was removed/refitted and I had to follow in those footsteps to remove them once more. I removed the spoiler because it was full of water, yes it appears that's a thing. 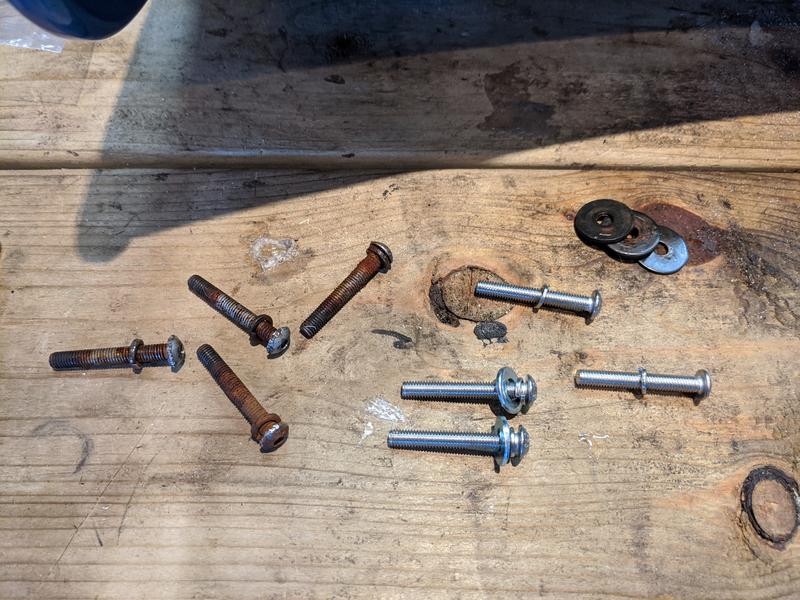 Aside from that I've just been getting some driving done, no big distances yet just a few 'long way round' essential trips around the local area. I am starting to get a bit more familiar with the new setup of the car and I am starting to build up some feedback.

1. Brakes - I commented that the RS14s were squeal free but it doesn't seem to be that black and white. Anecdotally it seems that when I've been "on it" for a while, then later do some low intensity braking that they chirp up a bit. Nothing too bad yet, and it may just be part of the early lifecycle of the pads. I'll try not to judge them properly until they've done a trackday.

Aside from that the pedal feel and consistency (as far as it can be tested on road) is excellent, it's probably one of the more significant drive-ability changes I've made to the car so far.

2. Suspension - I think I'm getting excessive bump steer with the new rideheight/geo. I say 'think' because I'm not really what you would consider a "car whisperer" and although I (now) understand the concepts of it, I'm not sure that I know exactly what it feels like.

To give the best description I would say that the car feels a bit like it's hunting out undulations and bumps in the road. Typically I would attribute tram lining like this to a change of tyres (usually going wider/stiffer) but I've run the same brand/type of tyres across both my Elise/Exiges). I wouldn't say that it's severe, but the car certainly feels a bit more sensitive to it. Secondary to that, on a longer sweeping bend where the suspension can get 'loaded up' a bit, I feel the wheel is darting a little bit in my hands, again nothing severe - this is a very minor trait.

Ultimately this doesn't seem to be hurting the road holding or handling of the car, so I'm reluctant to make any further changes until I can explore it a bit more first. Get the (brand new) front tyres scrubbed in and see how it feels on a snooker table race track, but in the meantime I may evaluate my options which seem to be:

a) Steering rack riser plates, cheap change which will just raise the rack 10mm, so no adjustability as such but might get the bump steer curve back towards centre a bit.
b) New rack and/or steering arms. A few options exist on the market, the Spitfire ones being adjustable via shims. A bit more money, but ultimately would give the most control.

The other issue that I have is being able to measure changes, I've worked with loads of 'geo' people over the years and not once have I discussed the measurement or adjustment of bump steer... but maybe that's because I've simply not asked.

I do welcome the opinion of the forums though, I don't feel my ride height is too extreme but I do need to measure it again to see where I'm at.
Top

I have the same thing with the car following undulations. Its particularly bad on heavily trafficed A roads and motorways where the trucks have worn a groove.

I dont get the wheel moving in your hands thing though when loaded up. The steering just gets heavy and I go round the bend.
Top

andybond wrote: ↑
Tue May 26, 2020 9:44 am
I have the same thing with the car following undulations. Its particularly bad on heavily trafficed A roads and motorways where the trucks have worn a groove.

I dont get the wheel moving in your hands thing though when loaded up. The steering just gets heavy and I go round the bend.

I think a certain amount of tramlining is just inevitable from a performance/track focussed tyre but it just seems marginally worse than my Elise did... rose tinted specs perhaps.

As for the wheel movement, it's probably not even visible if a passenger was to watch it... but I can just feel it ever so slightly. There's a very fine line between the usual journalist comments "OMG Lotus I can feel the road so amazing" and what I'm experiencing here, it just seems to be that I'm feeling a little 'too much' where I just want the wheel to load up and feel 'grippy' as you describe.
Top

Are you running 205 fronts? I found a marked difference in tramlining between the 195 and the 205
Top

They are brand spanking new, so perhaps they just need a bit of a beating?
Top

Yes, I found it worse between the two sizes going from the 195s to the 205s. Maybe as you said a stiffer sidewall means its less compliant??
Top
Post Reply
365 posts