This is where we proud owners can upload information and pictures of our pride-and-joys (their Exige that is..)
Post Reply
634 posts

Went for Geo again today, mainly to correct the toe and ride heights after my messing around.

Back to my local haunt for this one. 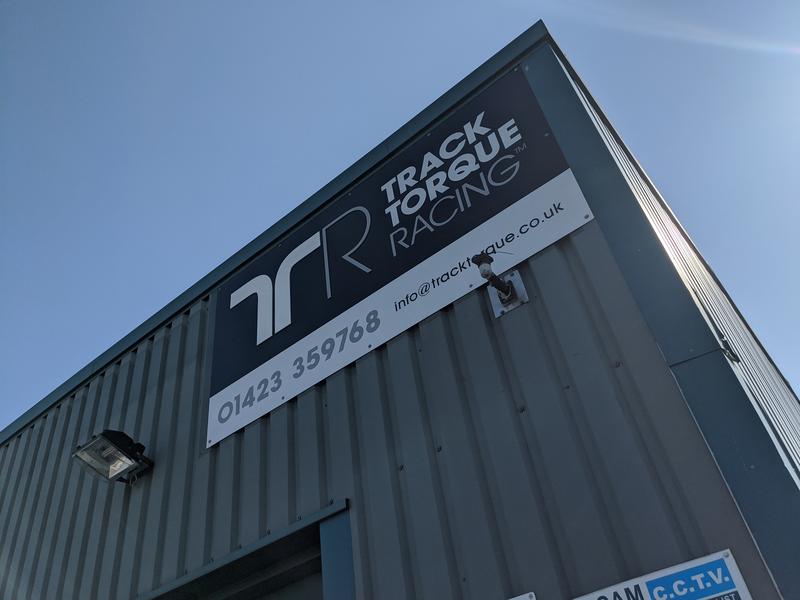 Other than getting a socially distanced tan in the carpark there wasn't much to report, cup of tea and a few laps of the estate later and I had a car and print out. 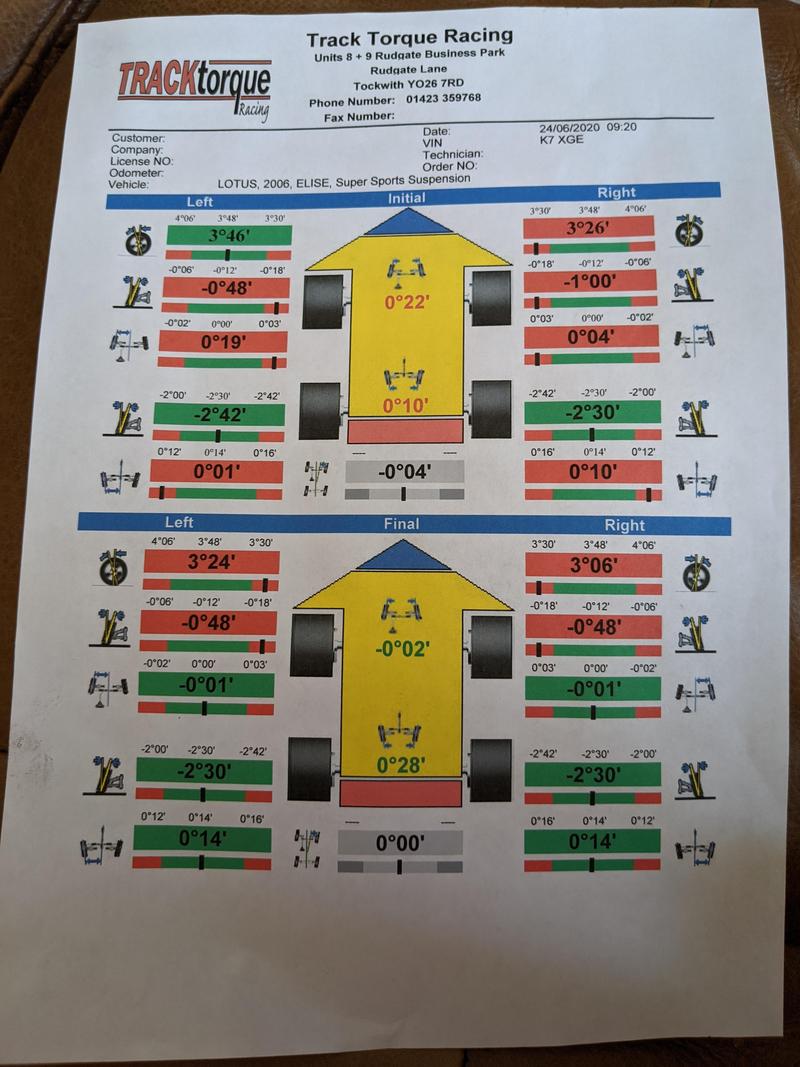 Couple of surprises here, first the OSF camber reading. I specifically recall [email protected] saying that my camber was 'one shim out' on that corner so he took an extra shim out. It seems the TrackTorque equipment disagrees with that and the shim has been refitted again

It would seem either TT or HPE have got a calibration issue somewhere, but I guess I need to hand in my race driver card as I can't tell the difference anyway 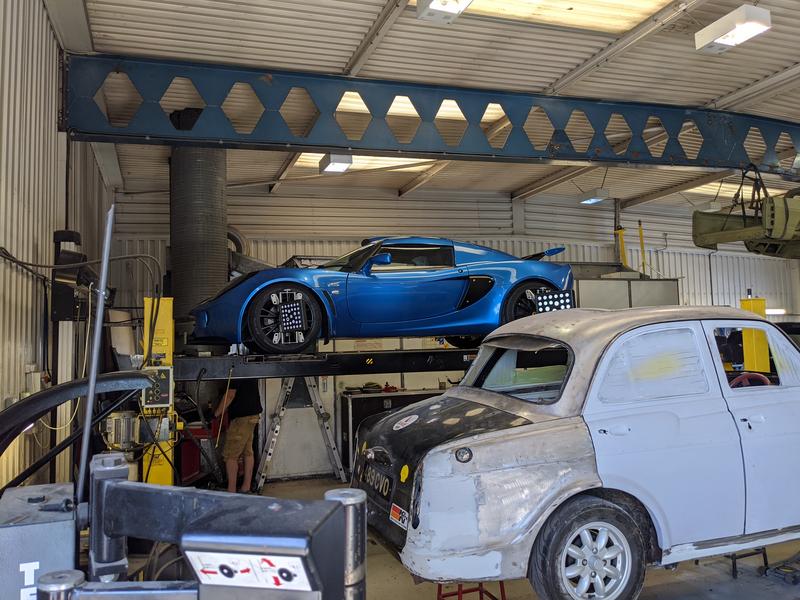 Front toe was always going to be a bit out, but wasn't expecting a discrepancy from side to side. I know Dan prefers a more neutral toe at the rear as he likes his cars to be a bit tail happy, seems TT have dialled some toe back in to stabilise it at that end.

Ultimately I know what to expect from this geo, TT have done my Elise and the original geo on my Exige with settings very similar to the above so not expecting fireworks, but good to know everything is back in line after my tinkering.

I paid my respects to Grandma while I was there 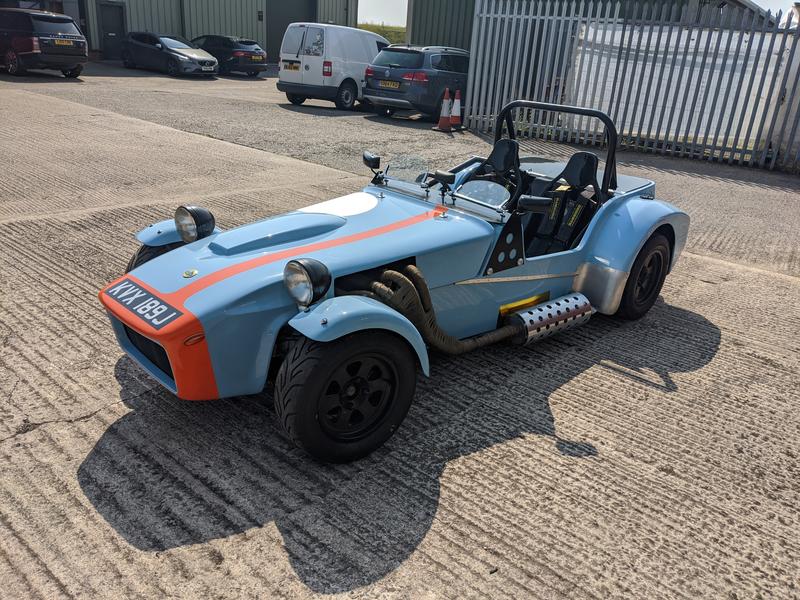 Car felt well on the way home, still feeling that the addition of the rack riser plates was well worth it. Car just feels like it's goading me on a bit through quicker corners now, a confidence I didn't have before.

Back to my AC/Blower issue for a moment, my AC worked flawlessly all the way there, approx 45mins of driving. On the way back the 'hot/cold' cycle seemed to return. As it happened I arrived home with the blowers on 'hot' so decided to have a quick peek inside again to see if I could catch the blend door in the act and sure enough it was sat on full hot despite the knob being on full cold. Once again I wiggled some wires about and the issue seemed to resolve itself... for a bit.

I disconnected the wiring harness for the actuator flap, quite difficult from above but got there in the end. The wires all look tidy enough and there's no sign of a pinched wire or loose connection but one of the connectors did have a bit of corrosion in it. 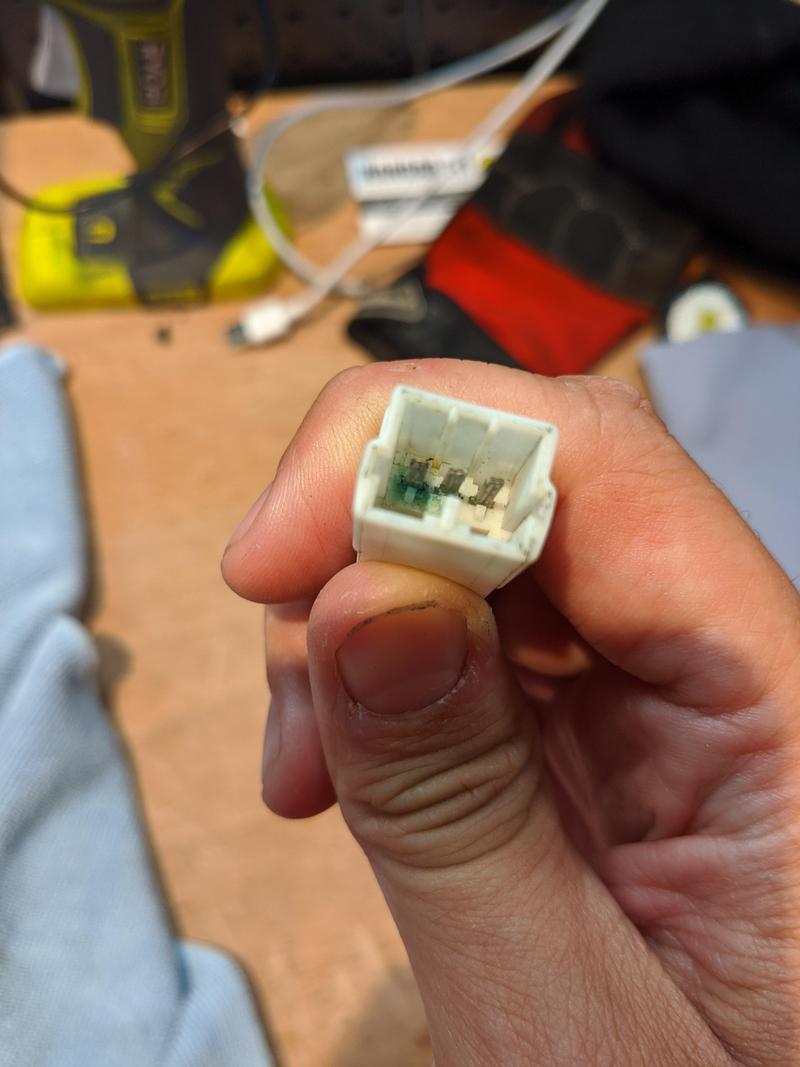 I gave it a good clean out and sprayed the connection on the loom with contact cleaner and hooked everything back up... no dice, in face the flap seems to stick more now than it 'unsticks'

I'm fairly sure that the actuator or flap is not mechanically stuck, but the wiring inside could be questionable if it's taken on water in the past. Heck the issue could even be further up the loom somewhere, but trying to see that with the clam on just isn't going to happen.

Now that I know I can disconnect the wiring ok from the actuator from above, I may just buy a new actuator and hook it up (without attaching it to the heater box, because that's impossible with clam on) but I can at least see if a new actuator... actuates reliably and then just stick it on a shelf till the clam next comes off.

In the meantime, I may disconnect the wiring from the actuator completely and just fix it in the 50:50 position. In this position with the AC on, the air is nice and cool but not the coldest, but once the AC is switched off, a bit of warm air drifts through - so it should see me through the majority of conditions. Might also try it full cold, actually struggling to remember the last time I used the heater, and it's a 15min job to push the flap the other way if it gets to October and the car is still taxed etc.
Top

I cannot get a bracket undone that obscures my flap ( oh er ) on the nearside inspection panel.

Glad you are working well
Top

There should be two screws, undo those then slide the whole thing back towards the front nose of the car, it's got some slotted gaps that slide onto the front clam fixings so you need to push it directly forward to clear those, then you can wiggle it out, requiring some inventive bending!
Top

Yep, found the screws. One comes out no problem. The other is a mess of oxidisation. Ill have to drill it and retap ..
Top

Baws... It is just one of those C clips behind it so easy enough to replace once you can bully the screw out!

I bet it's the hidden away one and not the one in plain sight?
Top

Baws... It is just one of those C clips behind it so easy enough to replace once you can bully the screw out!

I bet it's the hidden away one and not the one in plain sight?

Have you been sneaky peaking at my car? Its exactly that one! I have spare c clips ..
Top

Put a bit of time today for some Croft prep... which pretty much just consisted of washing the car

Obviously as per my other thread in the tech section I'm spending a bit of time fiddling with the heater matrix bypass/upgrades but I'll document all of that later when I've got some actual updates on it. Whilst messing around testing various things though I noticed a bit of undertray rattle whislt the car is idling/low RPM. Not overly concerned, I know with these diffusers/undertrays that just bolting them up in the wrong sequence can lead to reverberation I just planned to take it off, then refit it again.

I did however find an actual cause of a rattle, it seems the new 2bular cat has been touching the diffuser 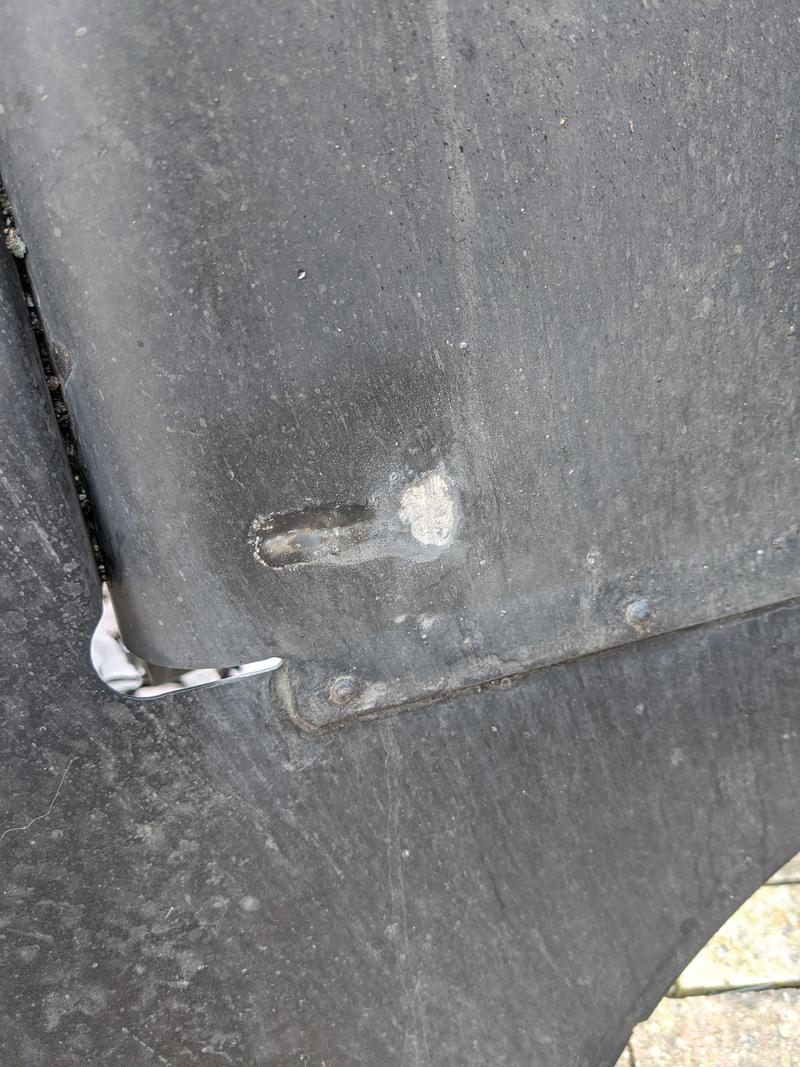 I could see looking through the NSR wheel arch that the cat body was sat flush with the diffuser. It is a bigger unit than the OEM cat that came off, but with it being an off the shelf part you'd expect no fitment issues like this so I initially just suspected an install issue from my end. I spoke to Jim @ 2bular who suggested the engine mounts may have some sag in them, which they could but I've got the Powerflex bush inserts in and they were practically mint when I inspected them last year so it feels unlikely.

I loosened off the donut join (the only place which can influence the position of the cat) and lightly jacked up my backbox, I maybe gained 1mm there when tightening back up again. I then refitted the diffuser with a couple of washers on the big M8 fixings which has bought me this much clearance: 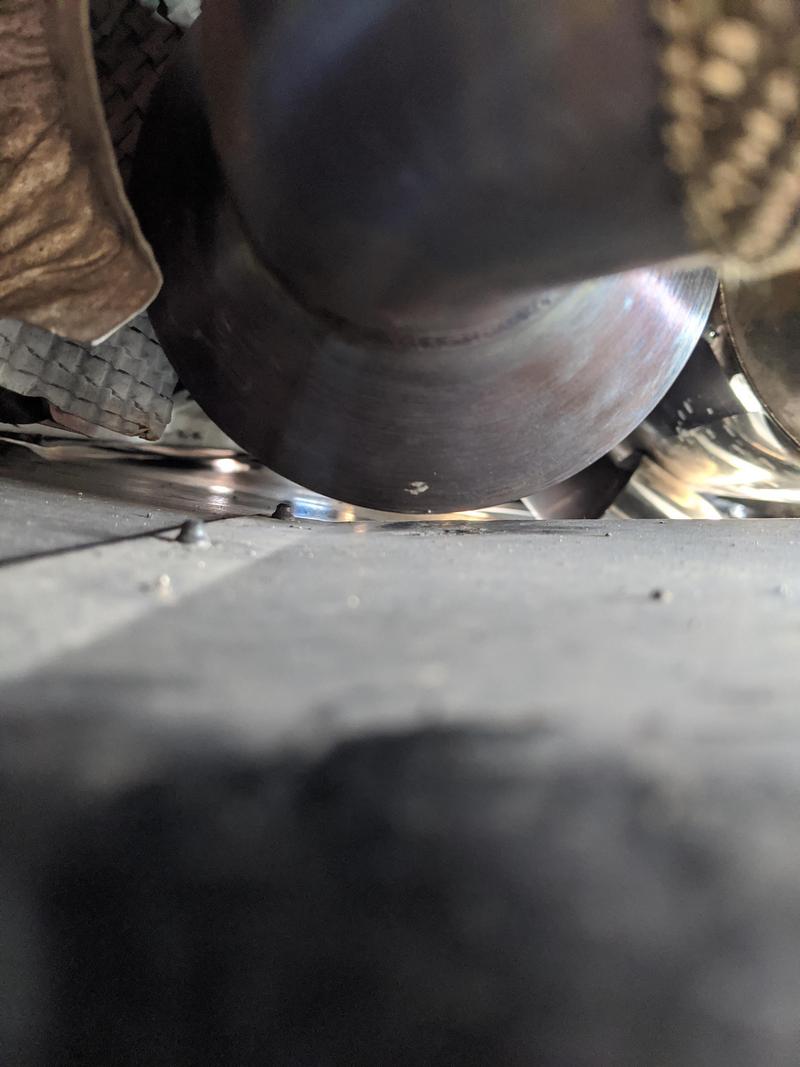 There's not much in it, I could probably space it a bit more with some washers on the trailing edge M5 fixings but I'd rather not - it'll make diffuser removal/install a right ballache. Hopefully this is enough clearance, but I'd be eager to see some photos from other users of the system to compare?

Other than that I did a mod, since getting my fitted mats in the cockpit I just had them velcrod to the floor which was working OK until Blyton last time out, passenger mat made a bid for freedom and ended up dangerously close to my pedalbox on the driver side. As luck would have it a FB'er was flogging some of the aluminium carpet buttons for... well, buttons - so on they went today. 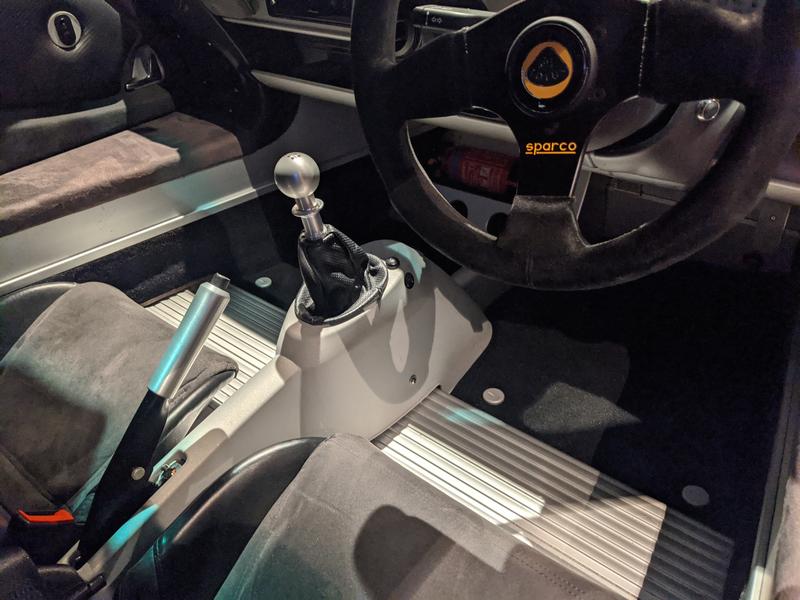 I've "hard wired" the heater blend flap into the cool position for my trackday (unplugged the actuator with it in the cold position) so not expecting any unexpected blasts of warm air... but we'll see what HVAC Jesus has planned for me.
Top

Good idea on the remove wire ...

I think Ill drill me knackered screw out this week and do the same ..

Out of curiosity what wheel have you ? It looks great
Top

I think Ill drill me knackered screw out this week and do the same ..

Out of curiosity what wheel have you ? It looks great

Sparco 300 and yes I love it, OEM horn push goes into it too with a bit of encouragement. Only thing I'm not so keen on is suede for the road, it's ace on track with gloves on and makes it worth having but it feels a bit minging on the road especially when I get sweaty hands courtesy of HVAC Jesus. Might even consider a leather one and quick release one of these days so I can have my cake and eat it

You saved me a question about worth it for the road mind ...
Top
Post Reply
634 posts