This is where we proud owners can upload information and pictures of our pride-and-joys (their Exige that is..)
Post Reply
572 posts

Another potential clue, which you may not be able to help with as your AC is currently not in/working - but is the blue light on the AC button supposed to stay illuminated even when the temp dial is set to warm? My blue light stays on regardless of where the temp dial is, which seems wrong. I'd imagine it to automatically click off when the dial is set to hot - so could be further ammunition that the dial isn't connected/working?
Top

Yep, that stays on no matter what the temp setting. Its SOP.

OK yeah that makes sense, false alarm there then.
Top

My 'flap' gets stuck too... I never put it all the way to cold or all the way to hot.. or it I will have hot air even when the AC is on.. although, my AC seems to have stopped working.. blue light is on, but I can't hear the 'click' when you turn it on... hasn't been regassed for a few years, so I would imagine that's the issue
Top

- The flap is accessible on the Exige, just unbolt the fuseholder and take the two screws out of the rain gutter thing, it should then pull out - sort of like getting a square peg out of a round hole though. 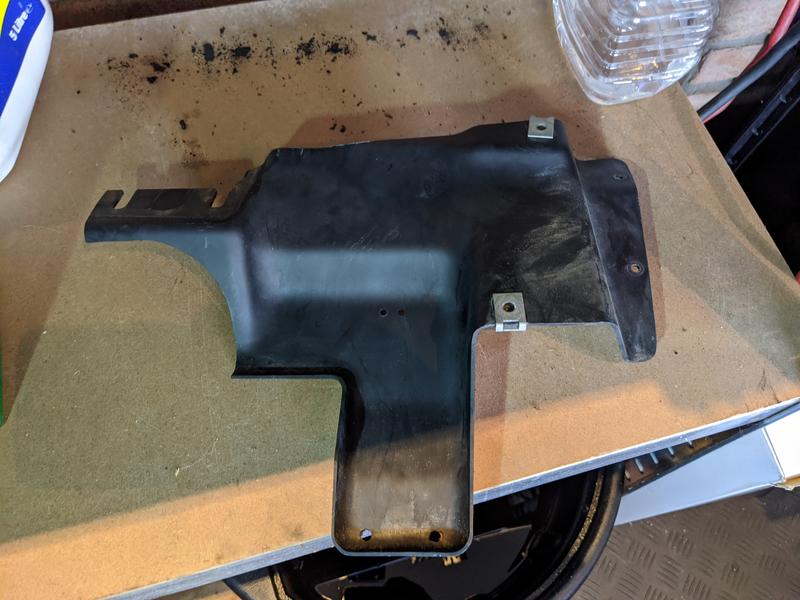 - Once exposed, just pop off the ducting that carries airflow to the dash.

My flap seemed to be sat in the 'cold' position by default (car was switched off with it in the cold position, so makes sense): 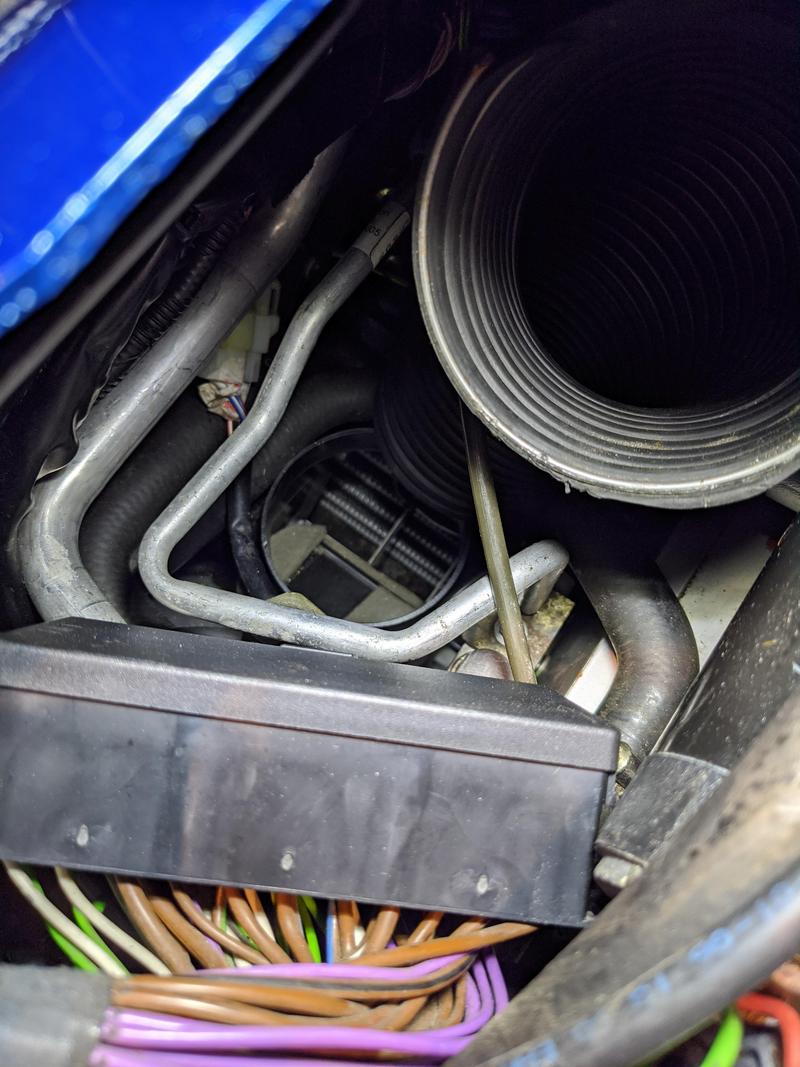 I booted the car up and switched the dial to full hot, and sure enough the flap moved as expected. 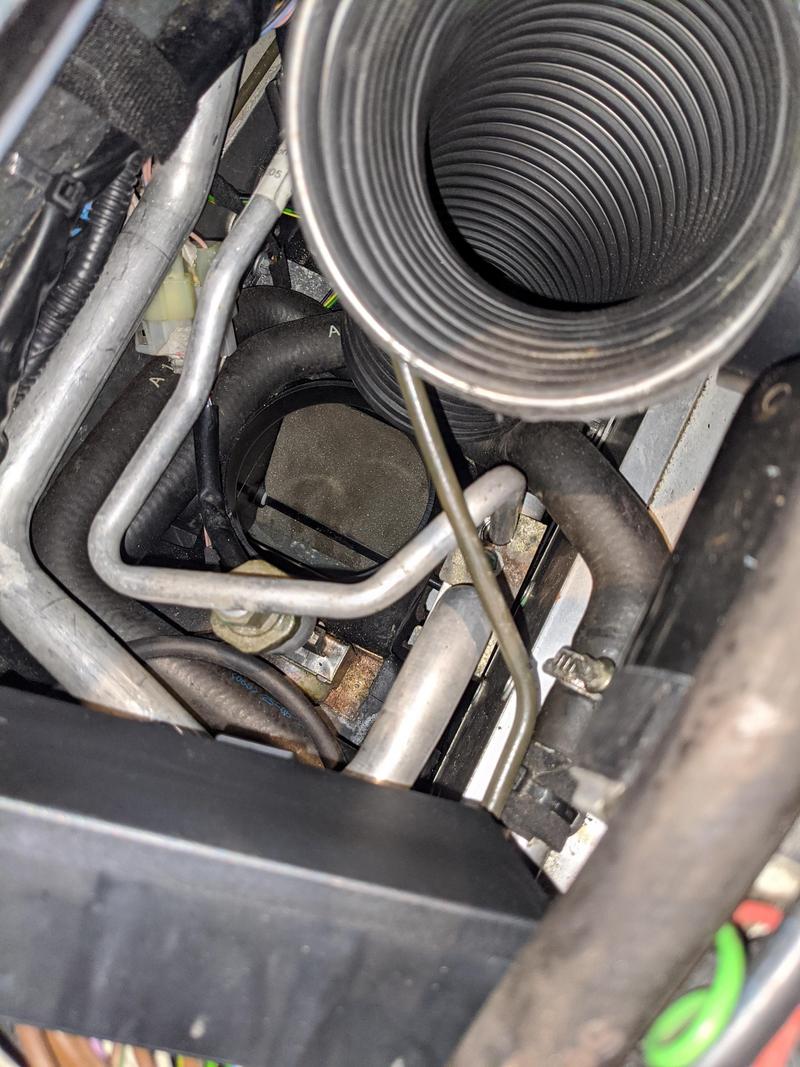 Also did another test with the dial set half way and the flap moved to the half way position as expected.

So that's all a bit odd, no evidence of this being jammed at all and the control panel knob is clearly working. The only thing which was a little suspect was the wiring to the temperature probe (the probe sat in the AC evap radiator) was a little strained by a hard line which ran quite close to it - so I've gently bent that back into shape so the plug isn't being pushed on.

Maybe I'm just expecting too much from the AC system, everyone does say that it's crap after all and my attention towards it is probably heightened due to messing around with it so much over Winter.

I'll pay a bit closer attention to the rear of the car when my AC is next running, see if I can see any pattern in how the compressor is operating.
Top

Thought I'd just run the car for a bit with the heater box exposed, hoping to feel/see the AC fluctuate as I've experienced it on the road and see with my own eyes what the flap is doing.

Ran the car for about 10mins, coolant fully up to spec and had the AC running all the way through. Early on in the process the AC clicked off/on a couple of times (could hear the compressor click and the engine revs fluctuate slightly in addition to the top mounted radiator fans kicking in/out) but the temperature flowing out of the heat box remained icy cool.

Once the coolant was up to temp, the AC stopped clicking off/on and just remained on all the time - the temp never rose, it all just remained nice and cool.

So either this isn't something I can replicate when the car isn't under load, or I've magically fixed it just by poking around for a bit.

ETA there is a bit of foam (I presume used to seal the flap) that's flapping around a bit on the blend door, may have caused a jam in the past? I'll glue it back down but it seems unlikely.
Top

Hmmm I think I might have just caught it in the act. I was going to put it all back together so thought I'd test one more go.

Flap was in the cold position before I started the car, I started up the car - didn't touch the heater controls at all and the flap had moved to the warm position. No amount of fiddling on the dials made this change, switched the car off and back on again - and the flap was behaving again.

This must be an electrical fault surely?
Top

Must be. Default is hot so I guess multimeter across the motor to see if your getting any voltage?
Top

andybond wrote: ↑Mon Jun 15, 2020 3:02 pm Must be. Default is hot so I guess multimeter across the motor to see if your getting any voltage?

I'm just going back through my old photos now to try and figure out the wiring.

When you say the default is hot, would you expect the flap to return to hot whenever the car is powered off? That's not happening right now, it just stays wherever it was last positioned... I think.
Top

How much of a difference is there performance-wise between the 4-pots and 6-pot Exiges - on the road, not track?