Planning a get-together, or want to tell us about a track day ?
Post Reply

I took a few snaps on my wander around the circuit, they're here...
https://flic.kr/s/aHskxhzMSR
Top

Some great snaps of a great day.

I took a load but we've only just got home. I'll get them up, with a linbk in due course. Can't guarantee to have caught everybody though.
Mike Stripe
Top

I took a load but we've only just got home. I'll get them up, with a linbk in due course. Can't guarantee to have caught everybody though.

Great Mike.
I am sure Pesky will appreciate looking at them too

gp_fisher wrote:
Great Mike.
I am sure Pesky will appreciate looking at them too

Sure would - thanks in anticipstion

Well I can't add much to what others have said, a splendid time. I'm sure the same thing happened over at The Bull and other venues, but at about 11pm there was a band of brothers well and truly bonded.

On the way home, my car experienced exactly the same issue as last year, spookily, in exactly the same place! Grease (the ridiculously expensive variety) blown out of the boot and the CV making a very unpleasant noise. Still, I'm getting good at nursing that issue home.

Roll on next year!

Gutted to have missed it......especially as the weather was GOOD. Damm.
Adventure not Dementia
Top

Firstly a massive and heartfelt thanks from me for supporting the event. Every single year, it always delivers and this year was no exception. I'll be honest, even though its the second time I've taken the lead on the organisation front, I was just as nervous when I started this thread and announced details of Anglesey 2016. I guess I'm always worried that it won't get traction or be missing the secret-sauce that makes it so special. I needn't have worried though, its everyone being together at such an amazing circuit that makes the event special and the only thing that struggled with traction was my Caterham

I do appreciate the kind words of thanks but its really not necessary lads. I'm passionate about the cars and the community and channeling my enthusiasm into the event is no burden. Ultimately the real organisation is done by BAT and as Chris says I just act as 'motorsport conscience' making sure as many exigers as possible are organising their busy lives to spare a couple of days to get to Wales.

So it was an extra special day for me on Thu because it was the start of the annual pilgrimage and I was picking up the Exige from the Edwards. I honestly can't express enough thanks to Martin/Steve (and of course Gill!) for working so hard to get the car ready for Anglesey. After spending the whole journey on the phone to work it was great to arrive and see my beautiful car sitting in the garage next to Martin's equally stunning machine. It really is everything I hoped it would be and so classy and resolved, I LOVE it. I know many people love the cars as god intended with standard parts and colours but for me both these cars represent Exige perfection; poise, stance, power, presence...they've got it all going on

Here they are waiting for the off as we busy about moving cars around and getting Steve's racer onto the trailer. Yes it's 'grey', its a Lambo 'Grigio Telesto' which is a bit like primer with pearl in it. Like I said before, not everyone like it but with the TMRs and carbon bits I think it looks mega. 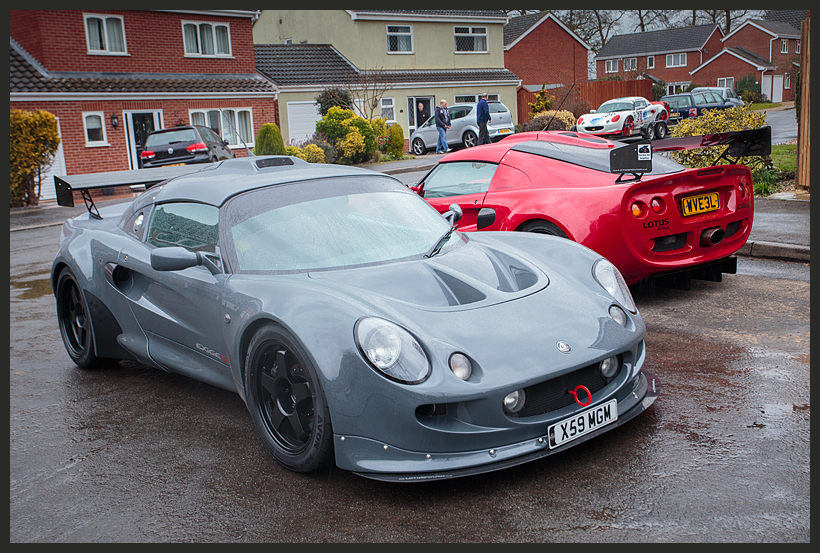 It was great to be back in the saddle after 8-9 months and the car felt fantastic. Lack of time meant there were a couple of issues surfaced with some brake vibration (legacy of PF clag) and a dodgy speed-sensor kept limiting revs to 5000rpm. It of course failed to remove the smile from my face as I was back in my Exige looking out over the shiny greyness and the immaculate interior. Such a shame that the weather was shite and the roads muddy and nasty as the cars looked so immaculate when we rolled them out the garage. After meeting the lads at Telford we bought up the rear of the convoy and took a relatively sedate pace given my intermittent 5k rev limit. Seeing Martin's ruby red Exige in my mirrors as we drove through Snowdonia did give me a bit of a flashback to slightly more rapid (mental actually) journey one year where on the same stretch of road I was practically wearing Sean's similarly coloured racecar

Great to see the lads in the bar on Thu night, show off my car and enjoy a couple of beers and banter. It was up early on Fri morning and after a lousy Thu I was super happy to see that the weather had come good on the forecast with clear blue-skies. My car was looking particularly tasty in the morning dew, I just had to grab my camera and take a pic 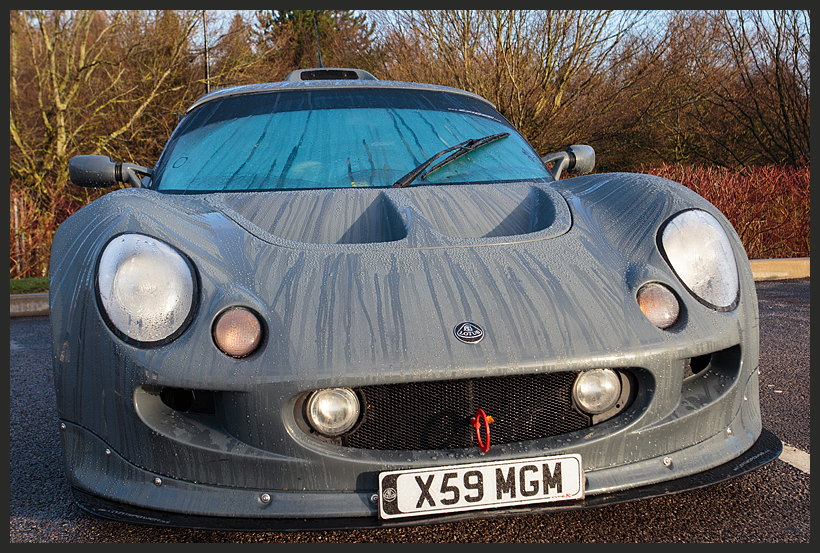 All was good at the circuit with everyone assembling, lots of old faces and some new ones too. The combination of reduced BAT staff (due to concurrency with their Spa event) and everyone arriving quite late meant that sign-on was a little chaotic so apologies for that. I'm not one for public speaking so was glad to be through that,..and I think Mike made an inspired choice in choosing Gill Edwards to be the next worthy recipient of Con's Red Calliper award. It was also fantastic to see Mike able to attend after the year he's had.

What with a couple of gremlins and because its currently so perfect and beautiful I'd decided to give the Exige a day off and spend the day in the R300. I know its an Exiges day but x3 R300's and Chris's Honda 211 did make a fine line-up in that end pit garage. We did have a giggle too with the flashing blue-light I'd managed to secure for Jonny's little fire-engine

I know me, Dave and Jonny are getting a bit boring like some kind of Caterham evangelists but when you strap yourself in and head out onto circuit they really are enormous fun. So direct, so pure where input absolutely equals output. A big part of buying it was to exploit that directness and improve my driving and I can now feel it paying dividends . Spending time on circuit with DaveP is helping a lot too, cheers bud. The R300 has a duality that allows you to be neat, tidy and quick or be a total hooligan and much fun was had with the latter...I may have been guilty of a small amount of showboating at certain points in the day

So much fun to be had this year. Lots of people commented to me that we seemed to be having fun and this pic sums it up...hopefully DaveP will share some video too (I forgot to put my camera on). 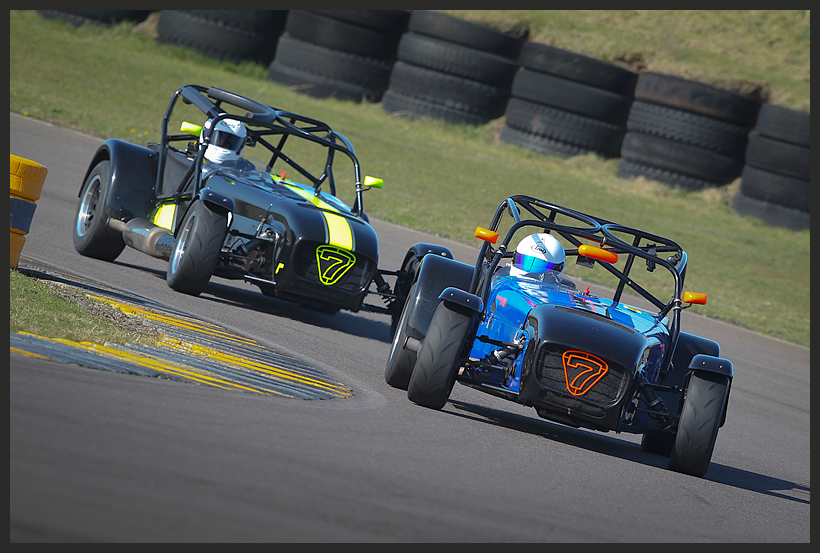 I did however feel gutted for those who missed out due to issues, those that I know about Clio Steve, Graham, Andy/Stan and Chris. I know how that feels I really do and its not a nice place to be. It wasn't nice for any of them but I particularly felt for poor old Graham who's returned to the fold only to be let down immediately by his new motor, gutted (wish you'd taken me/Jonny up on our offer bud). Steve was amazingly upbeat and at least Andy/Stan and Chris got some circuit time. Not forgetting Lord Beadsmoore after his large fuel leak to both not have any damage but also get back on circuit again..amazingly lucky day for him!!

After another entertaining night in the Premier Inn I headed to the circuit again on Saturday but...the weather had changed slightly. By the time I headed out on circuit it was classic Anglesey horizonal rain and very treacherous conditions. Even with fresh ZZS's on the car was like piloting a hovercraft.;..which has its own charms. Dave had a minor issue that stopped play for him and I called it a day too after a relatively short time on circuit. Its a long way home especially as I was dropping the Exige back with Martin and heading for another few hours in the beemer back to London...3x performance cars in one day, lucky boy

Martin sent me a pic today of both our cars already sparkly clean again.

Thanks again for everyone's support by turning up and being so well-behaved on circuit. Only one short stoppage for a mechanical failure speaks volumes. Thanks too to Jonny Leroux, Stuart, Tony, Josh and the BAT team for another great well run event. it was a stretch given the Spa double-header was going on but it worked out. Josh did a great job of looking after us and the cars and was an all round top lad.

I seem to have been rambling on sorry about that. I can't wait to be out on circuit again, Spa in particular is shaping up to be something special. I'll put up a survey at some point to gather opinion about the 2017 event!!
Top

Great write-up, Ben. I think it sums the day up for all of us. We are so lucky to enjoy such wonderful cars . . . But if I hear any more about the joys of Caterhams I might have to take the accountant's advice as I mentioned to you and "spend it" before the Grim Reaper calls . . .
Top
Post Reply