This is where we proud owners can upload information and pictures of our pride-and-joys (their Exige that is..)
Post Reply
807 posts

Just had a lunchtime tweak, pretty much got it sorted already I think.

Lambda target was leaned out a bit during the idle load range, took a tiny bit of fuel out and reverted the ignition retard that I put in and the idle is now sitting comfortably around stoich. The Idle is back to being a little clumsy though, when blipping the throttle it drops a bit too low and threatens to stall - exactly the same behaviour I had on the OEM ECU so this engine certainly likes a bit of fuel around idle... so I may have to have an MOT map and a usable map.

I'll pull the plugs out once the car has cooled down a bit, I presume they'll need a clean - and that will hopefully fix the high rpm misfire.
Top

Not quite top work, I spotted my issue with the misfire... quite embarrassing!

I was focussing in on the lean spikes (circled in red) and beginning to suspect something mechanical, maybe dodgy injector or something. What was also confusing me was why the EGO feedback wasn't freaking out and throwing fuel at it to remedy - it wasn't even activating, so that turned me to something software related.... then I widened my scope a little bit, and found the issue... traction control is inexplicably kicking in

As I've said a few times in this thread, my TC setup is very basic - as I'm currently not receiving a usable wheel speed signal from the front axle I can't use a proper setup which detects a differential between driven and passive wheels, I'm left relying on ECUMasters "RPM Gain" strategy which looks for spikes in RPM. I was almost certainly not getting any wheel slip today, so I can only assume that my different gear ratios are maybe fooling the system a bit. I know how to adjust the ratios in the software, so I'll fix that next time out.
Top 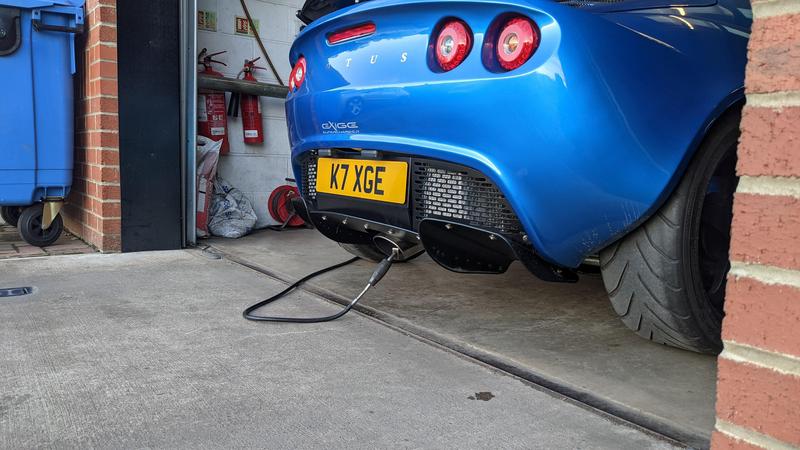 Pretty happy, partly because I now have a taxable car but also it's always reassuring when you make changes to the map and you get out the results you expected

Oh, and switching off TC did indeed fix the "misfire"... car feels rather rapid

You can properly call yourself a mapper now

Kyle mapping before his MOT Great work Kyle, glad to see it’s back on the road.
Top

I'm trying not to panic, but my new clutch is being quite noisy from cold... or more specifically, the release bearing is.

If I start the car and leave it idling with no pressure on the pedal I get a very slight rattle/chatter coming from the clutch/gearbox area. The slightest hint of pressure on the clutch pedal and the noise goes away, however if I push the clutch all the way in and give it some revs, the bearing starts whining in time with the RPM - almost sounds like a quiet boost leak.

This is especially annoying because I was warned off of using aftermarket release bearings when I first took this job on. That's not a dig at competition clutch and their supplied bearings specifically, it was just a generic piece of advice to say Toyota OEM bearings are almost certainly going to be made better, and last longer... so I bought one, not particularly cheap but I bought one and fitted it to the first attempt of the clutch job. When I had the drama with the first clutch kit not working/releasing, I made the decision to fit one of the two CC bearings I had on the next attempt just because I wanted to avoid any/all warranty hot water... so the new toyota bearing is now sat in a box on my shelf and the CC one is seemingly making noises.

I say I'm trying not to panic because I know I need to get some bedding in miles done, but it's starting to feel like wishful thinking that a few road miles will fix this. I've been under the car and double checked everything around the slave cylinder etc, checked the pivot point was still nicely greased but I did add some grease to the fork/pushrod interface. Might also give the clutch another bleed, but really clutching at straws here I think.

The good news is that I can only replicate the noises for the first minute or two of running the car, once I drive it - it's totally silent, and even once I reach my destination and do some low speed manoeuvres it's quiet as a mouse, so it might be something I can live with.
Top

I do hope its a bedding in thing! Trouble is now you have heard it, all you will do is listen out for it every time you start the car

It was always going to be a tricky one as if it worked the warranty was irrelevant, but you didn't want it going wrong again and them blaming the yota bearing
www.instagram.com/constantdetail
Top
Post Reply
807 posts