Collected the car from Performance Autocare on Friday, and happy to report a clear bill of health. Valve clearances were within tolerance (intake bang on the centre of the tolerance range, exhaust slightly to the looser end - but still within range) and the car (and my spannering) stood up nicely to scrutiny.

Jonny took a load of photos so would be criminal not to repost here. Car looked particularly lovely under the workshop lights (I need brighter lights in my garage) 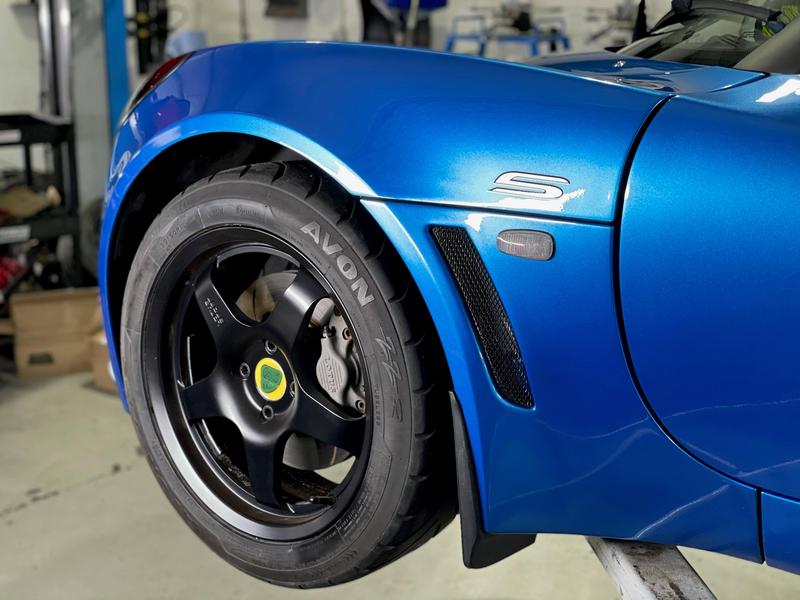 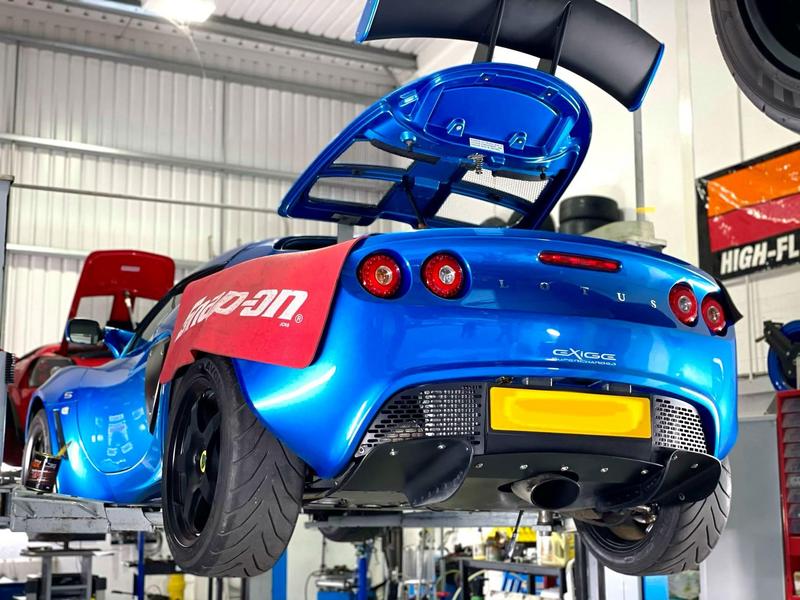 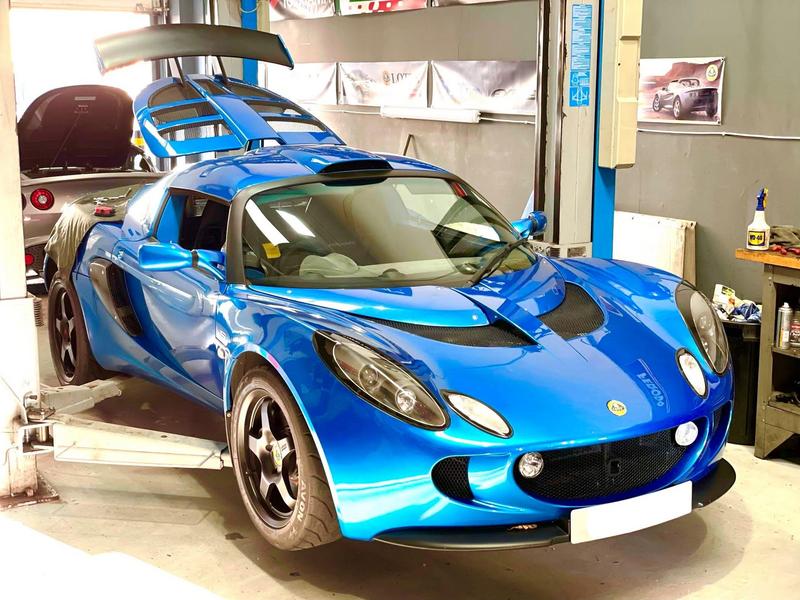 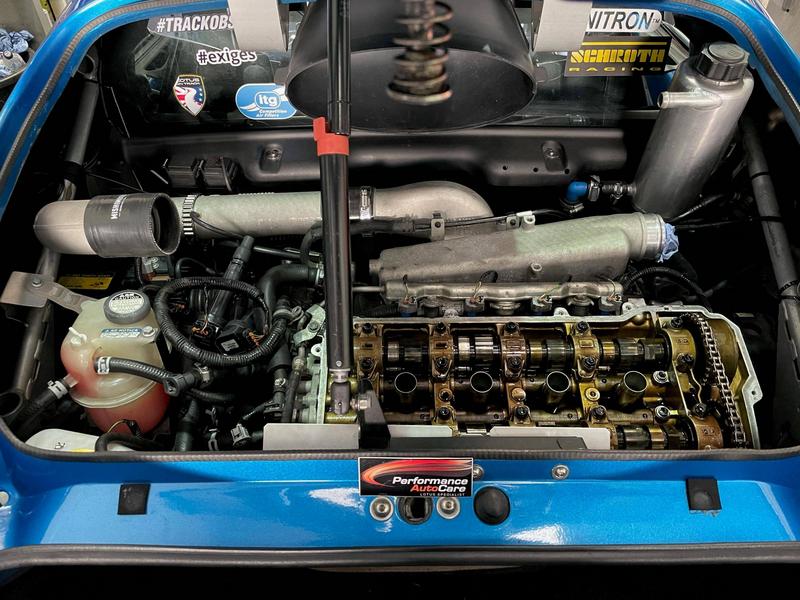 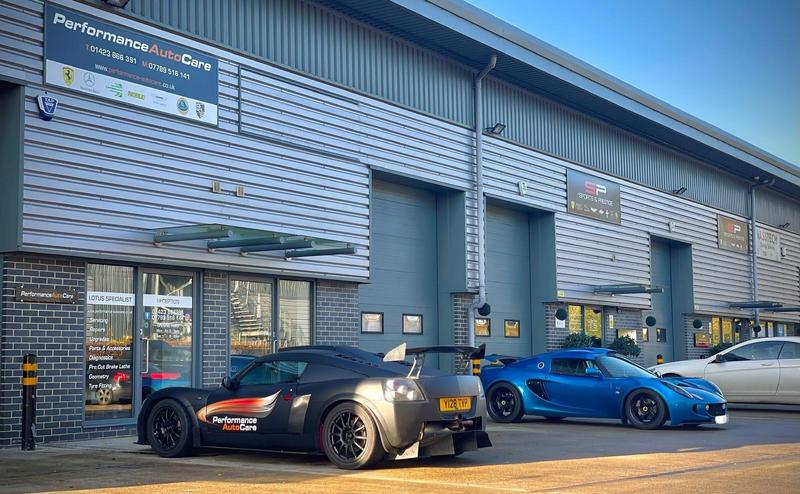 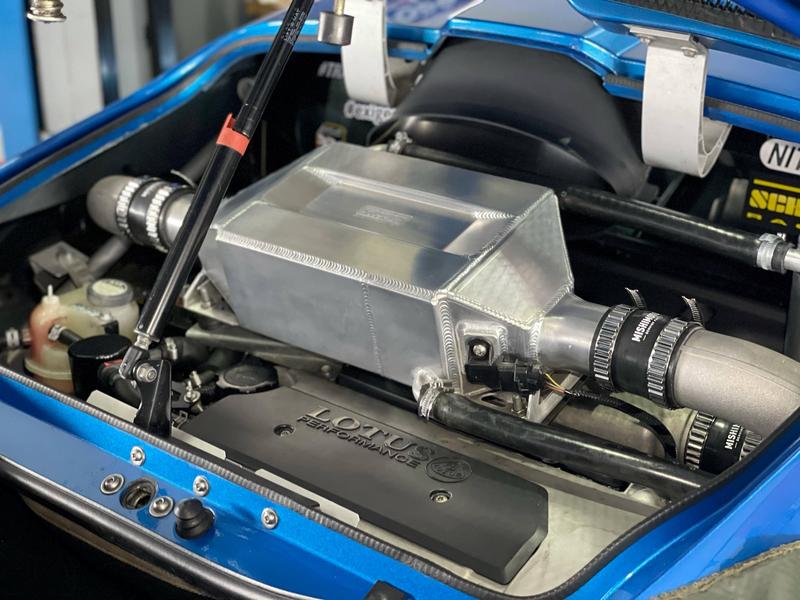 I used the car for essential duties this weekend just to make the most of it now before December SORN. Sandwich plate is definitely doing as advertised, oil temps are a good chunk higher now at cruising speeds - big test will be next year on track to see if it's adversely affected the top end - but so far so good.
Last edited by Fonzey on Sun Nov 15, 2020 5:39 pm, edited 1 time in total.
Top

I shall be following the oil temps with interest!
Top

Kyle what boost pipe to CC joiners do you have ?
Car is looking great

Just some generic silicone joiners and some massively overpriced and overengineered murray constant tension clamps. Had a box full of them from my Subaru days (blowing boost hoses off for fun at 35psi

). The ones I've got fitted are getting a bit tired to be honest, might switch to some t-bolt styles ones in the near future.
Top

Since I had the ECU fitted I've been fiddling away with it on and off, never with a substantial update worth making a thread update on its own but as we approach SORN for the year I thought I'd consolidate my changes a bit.

The core of my map I've not really touched, the business end at higher RPM/load has been bob on. I frequently review temps/air fuel ratios and knock levels and everything is steady away. There are other areas though which needed a bit of improvement, and some parts of the ECU weren't even active at all. 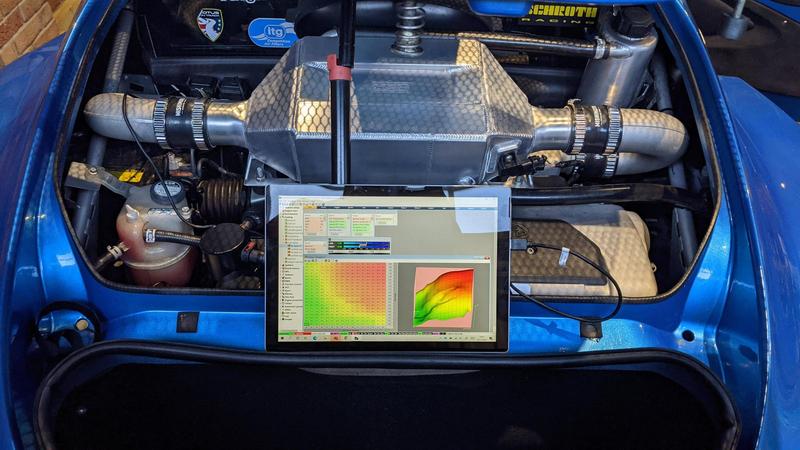 1) Traction Control. I've sort of given up on this for now. The RPM based strategy available to me is just not going to work on a car with an open differential. Once my LSD is in it might be more workable for wet trackdays etc, but the real answer is to get hold of a wheel speed - CAN convertor (ECUMaster make/sell one) which will then take speed readings from the ABS system and allow me to setup a proper speed based strategy which should be much more flexible.

2) My speedo was flapping around a bit. I kept forgetting about it because it didn't happen very often, the needle would just flicker from time to time. I eventually looked into it after I discovered an old forum post somewhere about a different aftermarket ECU brand having the same effect and they did it by applying some filtering to the VSS Signal. I found a similar option in the EMU and from what I can see, it's resolved the problem.

3) My Idle control was never great, even on the stock ECU. On the stock ECU I had issues with the car occasionally stalling when coming up to a halt from speed, RRR had this fixed in my initial map but it was a bit heavy handed - the car would drop revs and then the ECU would kick in and really over-do it to correct, resulting in a bit of RPM oscillation which could make low speed driving quite awkward. The first step towards resolving this was just to raise my idle target to 950 (from 800) to give the car more wiggle room for avoiding the stalls, this seems like a popular approach for most remapped cars.

I then noticed that my idle control mechanisms (timing and throttlebody duty) were maxing out to try and meet this new target so I spent time recalibrating those tables to allow the car to maintain a smooth idle with (pretty much) zero correction. This was quite time consuming as I had to do it for all ranges of engine temp, but was satisfying to get right.

I then had a play with the EMU's abilities to "catch" falling revs and smooth out the transition between falling revs and idle. The Lotus hardware has an inherent issue in that the throttle body is so far away from the combustion chamber (in terms of air flow) as it's got to go through the supercharger/intercooler etc which all takes time - this contributes to the clumsy idle control.

In short I setup the ECU so that the RPM target for idle was artificially raised for a few seconds when entering idle control state, this smooths off the descent of revs, but if you go too heavy handed on it you end up with your revs hanging which feels nasty. After a fair bit of tweaking I think I've just about nailed it. The ECU originally had a feature called "virtual target" enabled which is a more modern/clever approach to this but I just couldn't get it working right, these log screenshots visualise what was happening: 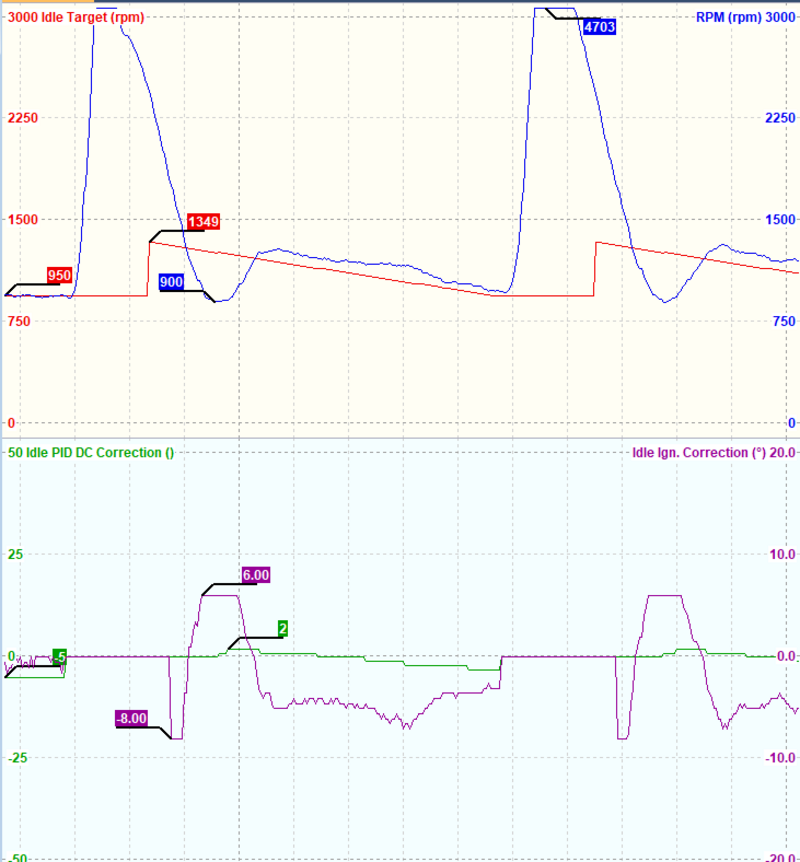 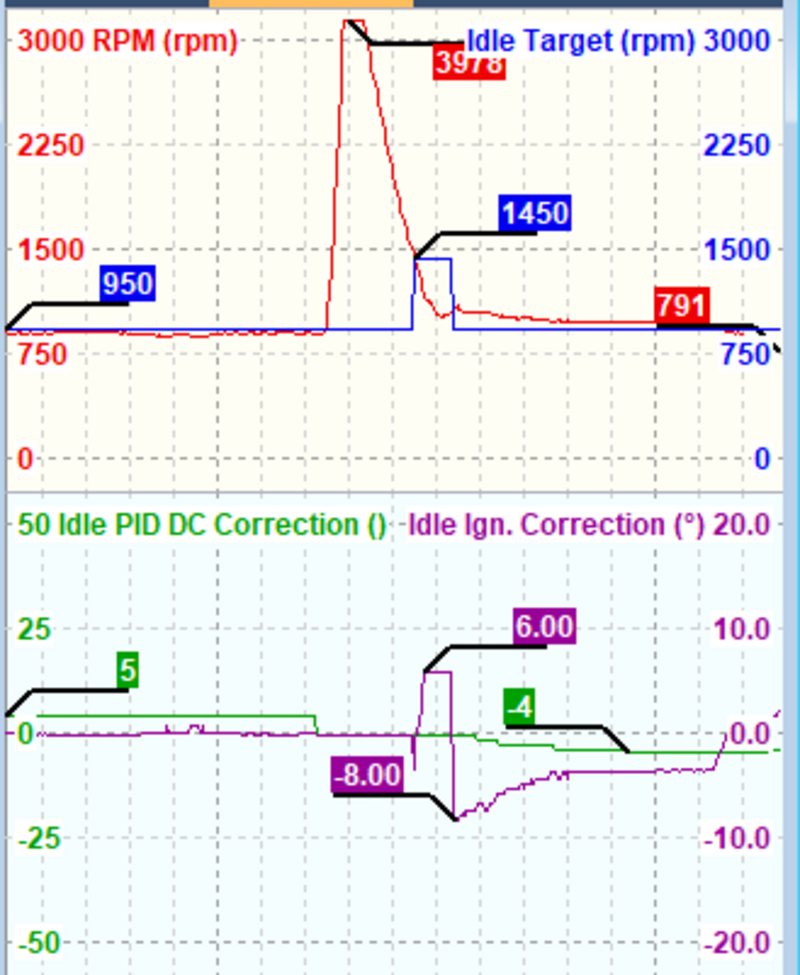 You can see how the revs would previously drop down to 900 or so, then rise back up to meet the virtual target as it steadily ramped down. This ramp down rate can be adjusted, but I spent hours with it and could never find a setup that I liked. On a different car/engine I'm sure it works fine.

On my setup, the increase in RPM target is more binary, and is just enough to throw a bunch of air/timing at the map to rescue the revs bang on the 950 range where I want it which leads to a much more OEM feeling setup. There's still a small dip as you can see in the graph, perhaps a bit more fine tuning can erase that but you can't really feel it anymore.

4) Finally, the fun stuff. Since I'd made my mind up about uprating gearbox/clutch this winter I decided to get my money's worth out of the current setup and have a play with launch control. I borrowed a base setup from a 2ZR Elise Cup car and tweaked it from there to match the different torque curve of a 2ZZ setup. I set a hard limit of 4900RPM (can/should go a bit higher I think for optimal performance) and started ramping down timing/adding fuel from 3500 to smooth out the limiter. I could go harsher for bigger pops/bangs at the expense of components like catalytic converters... and engines.

It took a few runs to dial in the throttlebody overrides to try and maintain enough torque to not bog down, but once I got it, it felt great (until sea sickness kicked in!)

Whether it's faster than a manual launch or not? Who knows. I'll probably never touch it again after an expensive clutch goes back in the car

I need to talk to you about the speedo thingy - mine does the same!!!! And also does the same on the AIM dash too!
Top 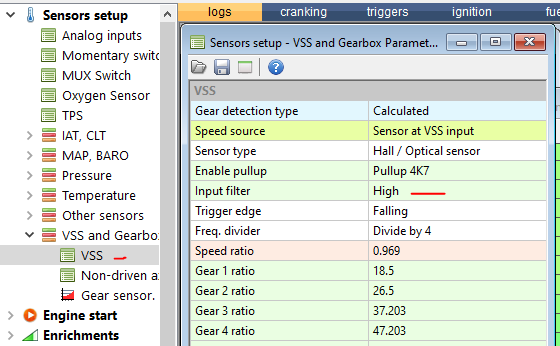 The noise of the launch control was ace.
When you realise how much you have to fiddle with aftermarket ECU maps to get an OEM experience, it makes you realise how much effort must go into new engine/ecu development that you never pay notice to these things when driving a stock car in any kind of condition.
Top

andyzim wrote: ↑Thu Nov 26, 2020 4:15 pm The noise of the launch control was ace.
When you realise how much you have to fiddle with aftermarket ECU maps to get an OEM experience, it makes you realise how much effort must go into new engine/ecu development that you never pay notice to these things when driving a stock car in any kind of condition.

Absolutely. Don't get me wrong, I could have driven my car and never touched the settings etc and would still have been happy but going standalone was always intended to be an opportunity to learn something new and get stuck in. I feel like what I have now is really, really close to an "OEM" feel and it loads better than the car was originally but still it's taken a lot of work, and definitely not work you could achieve with "half a day on a dyno" or via a generic flash map. Proper mapping is more of a journey I think

I succumbed to a bit of garage envy this week and took a delivery of half a tonne of terror... I bought a scissor lift. 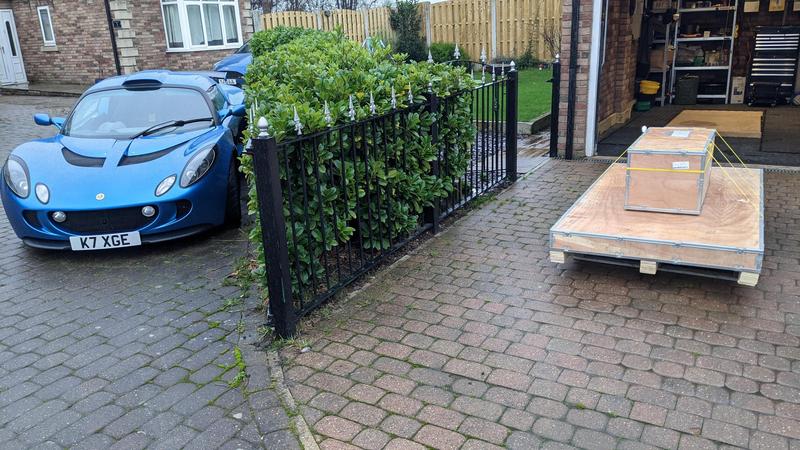 Obviously inspired by @lotuslee and his thread, but Lee also had some cracking consumer advise to take on board. Our lifts are very similar, but the design has altered over time it seems.

I'd planned on getting a lift sorted when I moved into the house but always wanted to get the 2x single doors knocked into a double before doing it, so I could position the lift centrally. I've recently made efforts to plan that work in, but I just can't find anyone willing to come quote for the building work.... so it's back burnered for now. I'll try the lift on one side of the garage for this Winters' tinkering, and if it's too annoying working near the wall I can always revisit. 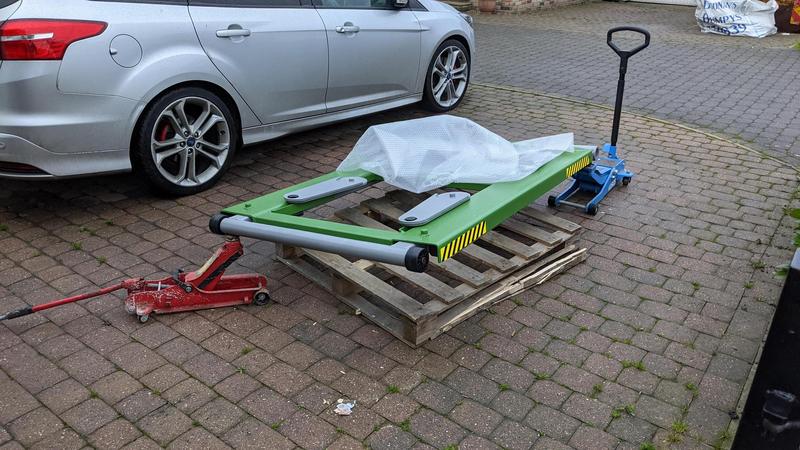 The reason I spoke to Lee a lot is because the Lotus lifting points are not accessible to all lifts. Some people risk it with just 'sill support' down the chassis rails but we've all seen the photo of a yellow Elise falling backwards off of a lift, which is something I'd like to avoid.

Lee's lift allows access to the appropriate lifting points, and critically just about allows a (stock) Eli/ge to drive over it, so you can straddle it without too much effort.

I was a little concerned with my ride height, but luckily my calculations just about worked out and I can straddle the lift by 'sinking' it into my floor via the duramat tiles, giving me a 24mm head start (2x tile depth). If I just had a flat concrete floor, I'd need to drive the car up onto ramps first. 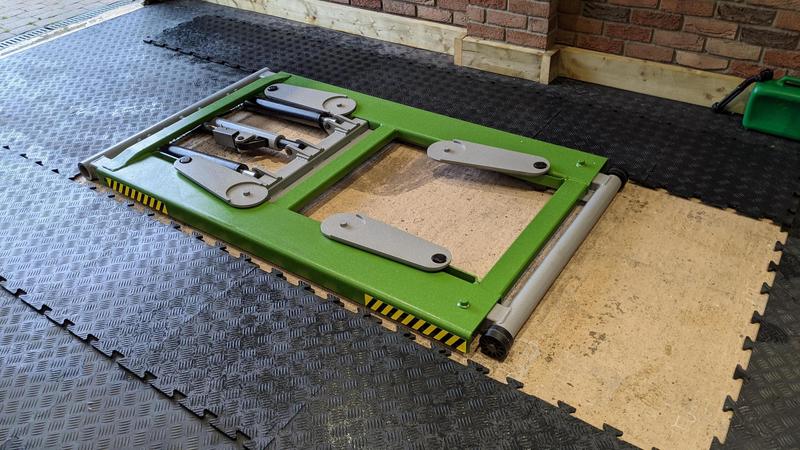 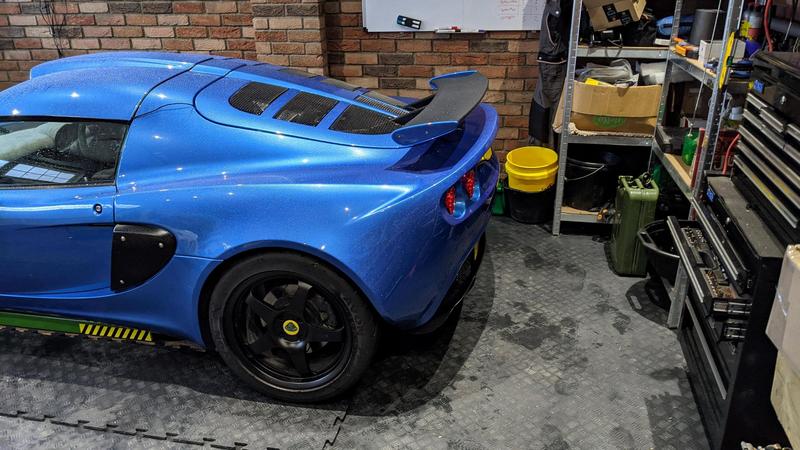 The subtle design differences between my lift and Lee's actually make mine a bit more awkward to lift an Exige on. The jacking 'puck' positions on mine are much less flexible, as Lee can slide his up and down the length of the arms whereas mine are preset on the end of the arms. However after a bit of stress and mucking about with a few e-mails back and forth to Strongman (excellent support btw) they informed me that the arms don't need to be used at all, the pucks can just sit on the green beams directly or even can sit half way along a grey arm if needed. This gave me much more flexibility to reach the appropriate 2-post ramp lifting points.

After delaying for as long as possible, I finally went for a test lift. This thing scares the life out of me, but with each lift I get a bit more confidence. I'll play with it this weekend and hopefully by Sunday night I'll be brave enough to sit under the car. 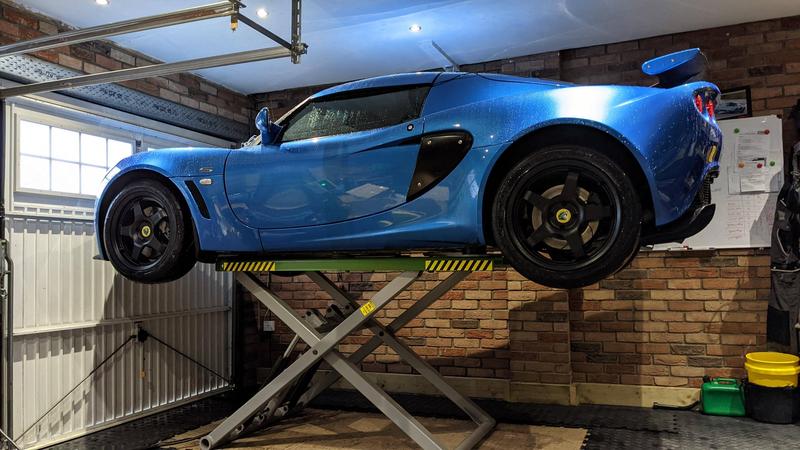 The lift has a maximum reach of 1300mm, but the highest lock position is around 1100mm. That's about perfect for standing and working on a corner, or sitting on my wheely stool and working under the engine/gearbox. I did have to modify the garage door mechanism so I could lift the car to full height, but that wasn't too difficult.
Top
Post Reply
680 posts