I've decided to stick a new sandwich plate in, couple of reasons...

1- It's an easy fix for my OE oil pressure switch, I can put that back in its rightful place and use the 1/8NPT port on a new sandwich plate instead for my new SPA/ECU sensors. (this is the main reason)

2- In a (possibly futile attempt) to address oil temperatures. I noted this earlier in the year when my front mounted oil coolers sprang a leak that my car ran very cool. Both coolant and oil temperatures are generally very low. On track this works out fine, as my "on it" temps are just about in the ballpark for where I'd want them... but even then, my oil temps are on the low side.

On a cold/wet motorway my oil temps are scarily low. After driving to Oulton on Monday night last week, it was 7-8degrees ambient temperature and after 70 miles of cruising at the NSL my oil temps had never gone above 60, and were only just in the low 50's by the end of the journey. Even on a summers day, cruise temps are unlikely to be higher than low 60s. I know measuring in the sump is probably the coldest place to do it, so I do keep that in mind - but I still feel the car is way overcooled.

I was talked out of swapping to laminova earlier in the year, which may well be a good move - but I still had it in mind to look at some other options to try and speed up oil temps and allow them to stabilise a bit higher.

So here we go, I won't take credit for R&D on this as it's been discussed to the death on Lotustalk but generally the results are supposed to be good. All (most?) oil sandwich plate thermostats will let through a constant 'dribble' to prevent a temperature shock when the stat' finally opens, but it seems like the OEM Toyota/Lotus one is just "too dribbly". Perhaps they're not all as bad as each other, but mine certainly seems to let substantial quantities of oil through as soon as the car is running (tracked via a trick IR camera I happen to have lying around) and the coolers start warming up immediately. My hope is that this Mishimoto one reduces this effect a bit, and minimises temperature loss before the thermostat threshold (85deg).

I've had Mishimoto plates on a couple of project cars now, never failed me yet and seem to be a bit of a 'go-to' option nowadays.

The main challenge for fitment is the oil cooler lines, they have a 5/8BSP fitting and the Mishimoto plate takes M20. M20 x 5/8BSP male-male connectors are apparently very rare and hard to get hold of. I ended up asking a local hydraulics/engineering firm to put some together for me. Downside is they're a bit longer than they would normally be, but there's still just about enough clearance. Another plan would be to swap the line fittings for something more metric... maybe that's a future fix. 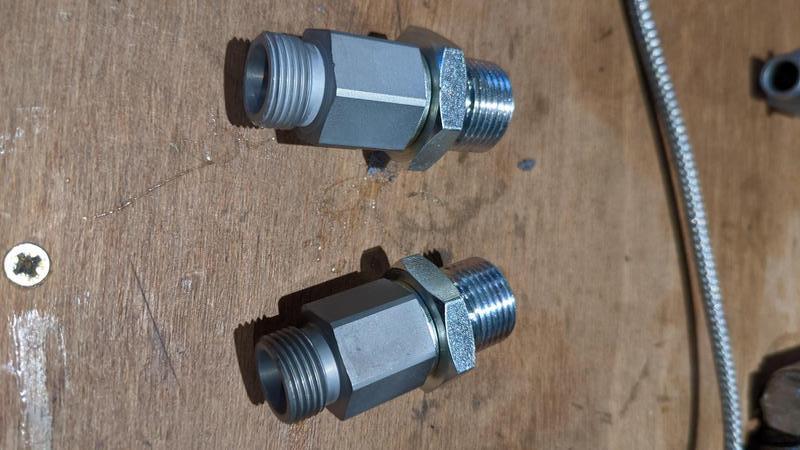 OEM sensor needs a 26mm/1" socket for removal, then it pops right off. 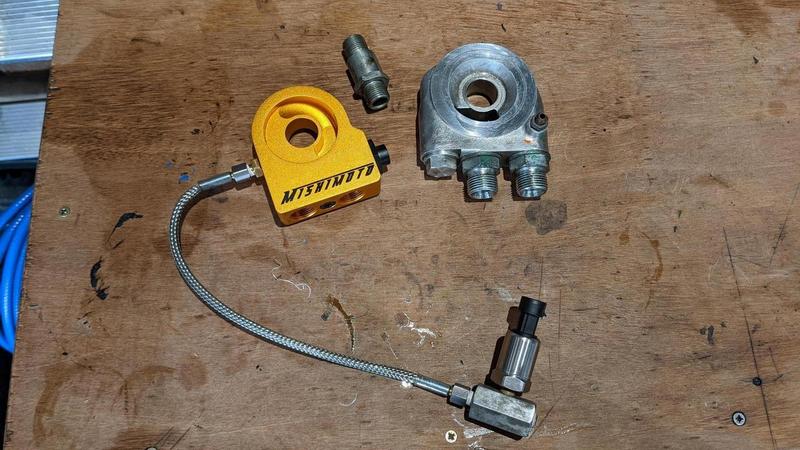 My plan is to retain the remote t'piece and blank off one of the holes (as the OEM switch has gone back to its proper home). This lets me position the sensor away from the sandwich plate and also gives me scope to add another sensor in the near future for ECU logging. 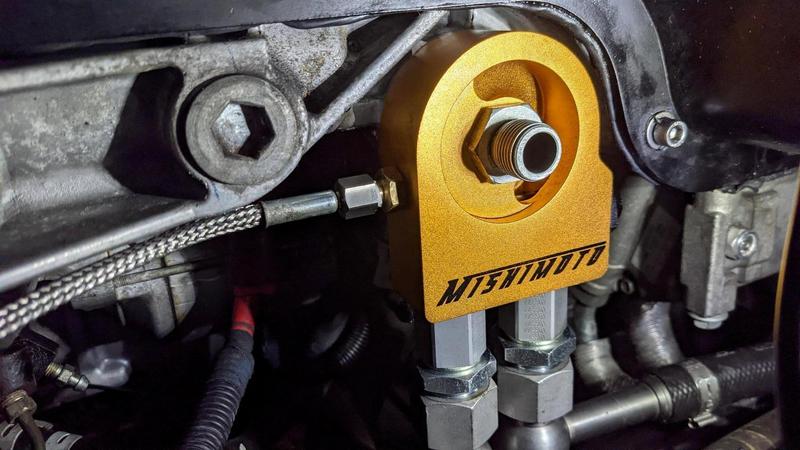 I've not really tested yet, I've got some other tinkering to do - but it holds pressure at least and doesn't piss oil everywhere when the car is running on axle stands...

I'm a little sceptical about whether it'll sort the temps out or not, but will report back either way. Oh, and my dash oil "idiot light" now works again

Oh I've lobbed another Bosch lambda sensor in too. It's now logging AFRs correctly again, so definitely a duff sensor. Hopefully this one just lasts and I can forget about it.
Top

Kyle ive not got round to looking at this on mine yet as plan to ģo down the Aim route so forgive my ignorance but could you not of used this fitting for the oil pressure sensor.

That's the thermostat, not a sensor port.
Top

That's a bleed nipple for bleeding air out of the cooler circuit. It's threaded similar to that of a caliper nipple with a sealing cone, not a tapered NPT thread like most off the shelf sensors are.

Last night I had the car running up on axle stands just checking for leaks etc on my new adapters/sandwich plate, all seems well (though not totally happy with the adapters, it's introduced a couple of potential failure points so I think long term I may look at swapping the hose fittings for AN ones and then I can use a "native" connection to the plate. Temps in the garage at idle rose to low 70s, IR camera showed the coolers heating up from 30+ which indicates that the thermostat is doing as promised and is constantly letting a steady flow through.

Did a short trip out this morning for essential supplies. Was about 4 degrees outside and thick/wet fog. Despite the conditions oil temps seemed to rise much quicker than previously and they settled around 10 degrees higher than my last trip out.

A short dual carriageway cruise still worked to bring them down rather quickly but giving the car any real load gets the temp into the 70's dead quick so early signs look good. I'll probably judge it more fairly next summer...
Top

Finally got the car outside in (sort of) daylight for a picture of the new wheels. 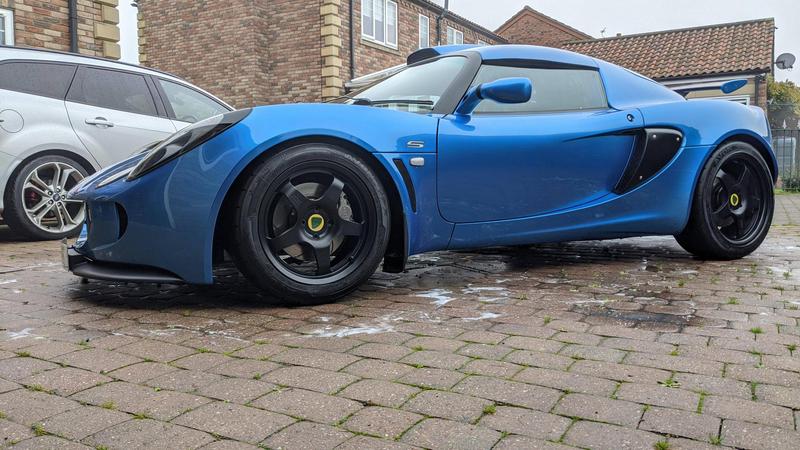 I've had my 'original' ZZRs from my y-spoke wheels put onto these, and left the y-spokes naked for now, I'll probably stick some all-round tyres on them so I've got options for monsoon trackdays.

It does however mean I've got a growing pile of ZZRs that I need a home for... 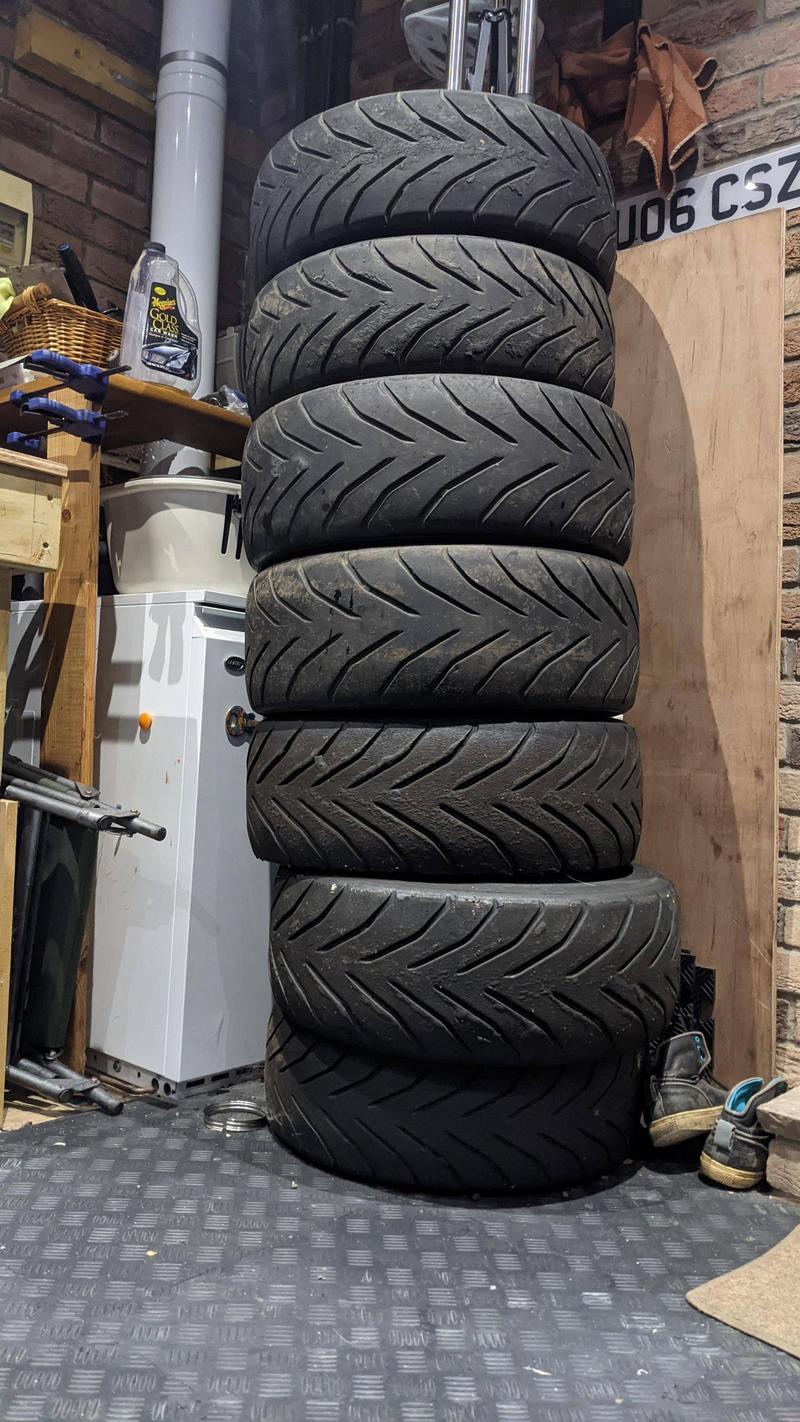 Look better on silver cars , but not bad. Not bad at all ..
Top

Where did you buy them from Kyle?
Top
Post Reply
680 posts