This is where we proud owners can upload information and pictures of our pride-and-joys (their Exige that is..)
Post Reply
604 posts

Hi Kyle! Just FYI, mine is set to idle at about 950rpm by RRR and I have no 'stalling' issues (which it previously did have when set to a lower idle rpm), despite having the Fidanza flywheel and lumpy cams. Since fitting bigger fuel injectors I don't have the cold start problems I previously noticed either... although I'm worried I'm overfuelling now so need to take it back to them!

Interesting cheers Matt, I just spoke to @andybond and it seems his tuners on his ECU went the same way too.

I guess I've gone a long way round of changing the idle, I could have just done it in the ECU without lifting a spanner but at least I've given the TB a good check over and clean out.

With Covid restrictions ramping up again my next trackday of Anglesey at the end of October was feeling threatened so I wanted to try and get out in September. Everything has been fully booked all summer so I put a shout out onto a FB group which is intended for the buying/selling of track time and I got an offer of Croft on tuesday this week. I snapped his hand off, and after not hearing much over the weekend we finally got it confirmed with the TDO on Monday.

The car didn't need much prep, just lobbed my tools in the back and packed my helmet then I was off! With not much time to think ahead, for the first time ever I didn't have weather anxiety on the run up to a trackday as the forecast was bob on. Nice early start as the sun was just starting to cut through the mist. 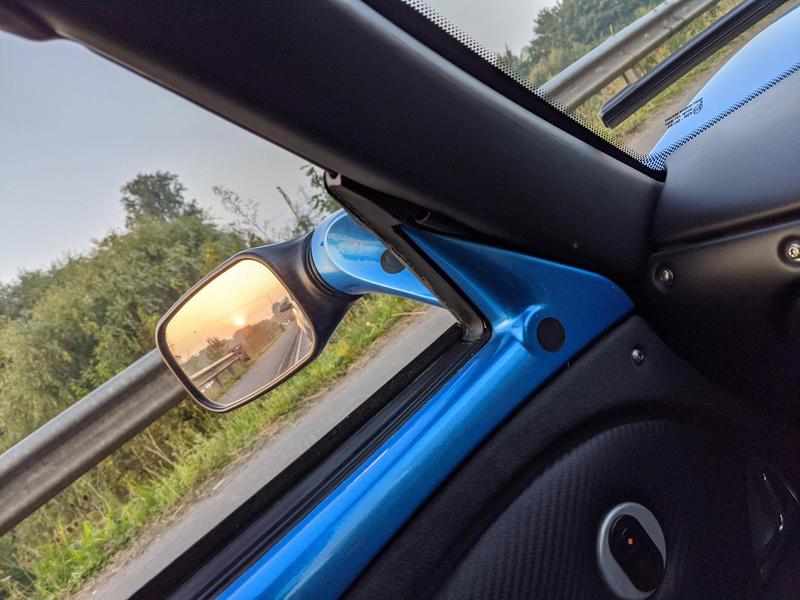 Not many Lotus in attendance but I quite like the colour of my paddock-mate. 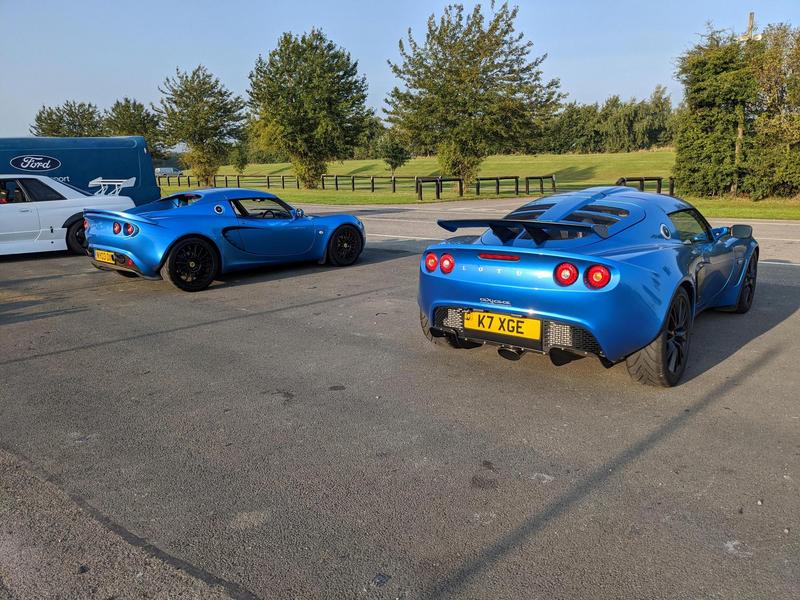 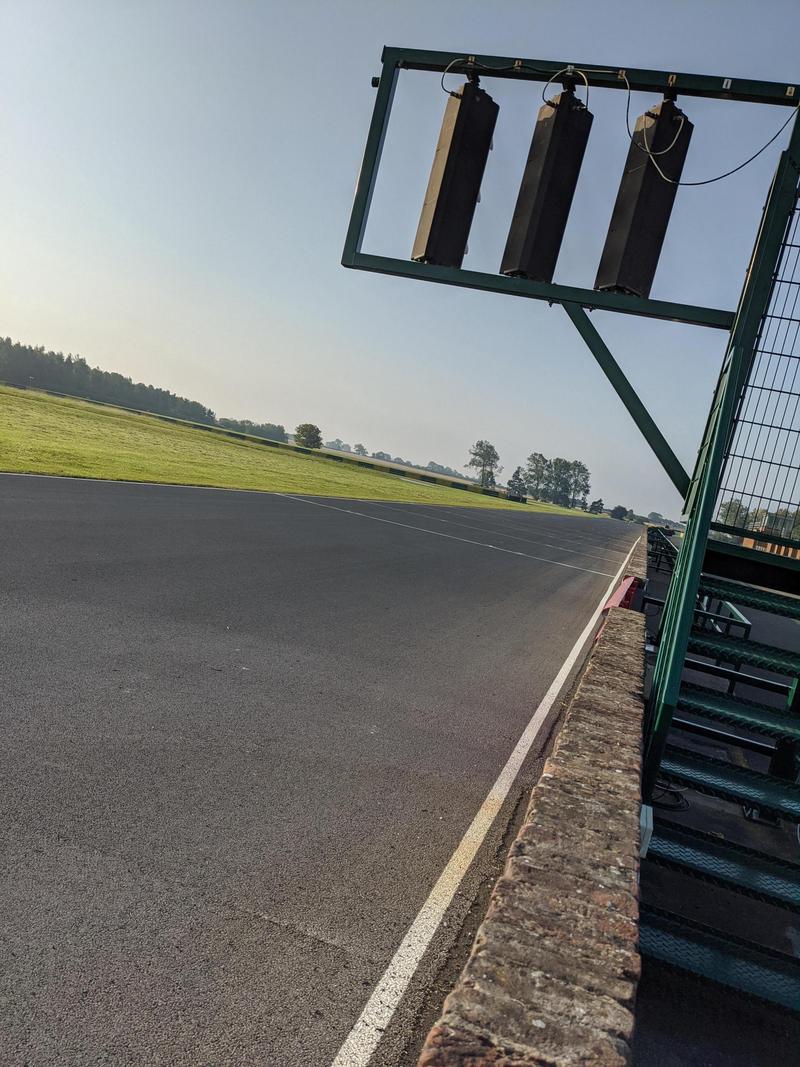 As this was technically a "bonus" trackday I had decided I'd use it as a day to experiment with suspension setup, something I'm usually reluctant to change mid-trackday because I don't want to lose track time to a naff setup or get myself lost in iterations. I normally stick quite close to the 'middle' of the Nitron settings, hovering around the central settings and just tweaking in small increments in an attempt to alter the balance of the car a bit but today I decided I was going to run much stiffer and see if I could find the point where things got *too* stiff.

My starting settings (taken from my last Croft day) was 8/8 from hard (total of 20 clicks available) and I did the first couple of sessions like this. Car felt good, but maybe felt too soft at the rear as the car was pushing on a little bit and I think I was lifting the occasional front wheel.... in fact, I know I was 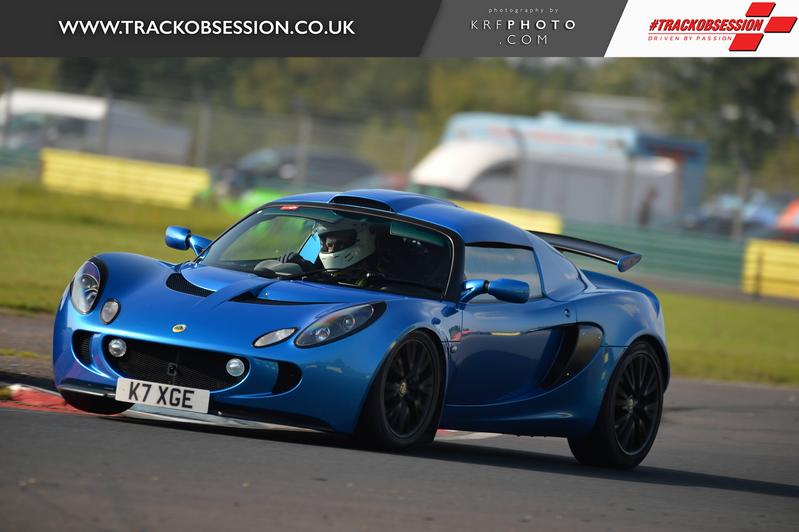 Through buying a cancellation I'd also inherited a tuition session in the mid morning which was a great use of 20mins. I've never felt like I had 'Tower' anywhere near decent and so we focussed on that and got it a bit better, but I know where to keep improving there for next time. Other feedback was generally strong, just said there's loads of time on the table through commitment in the 'Esses which I'm well aware of, but comfortable with my commitment levels through there for now

I popped out at lunch for fuel and food and bumped into a fellow petrolhead (not linked to the trackday) in a Clio 182 trophy - don't see those too often so had a good chat about all things cars before hurrying back to the circuit.

After lunch I'd brought the settings to 5F 2R (from hard) and I remained like this for the rest of the day. Traction felt really good like this, particularly on the hairpin - I still can't be too heavy footed through there but it was loads better than earlier in summer. The only hint I got that things were too stiff in the rear was that I'd occasionally feel the rear hopping a bit when entering the hairpin too quickly, quickly followed my a small slide on entry, I found slowing things down on entry and being more aggressive on exit was an acceptable response to this.

In hindsight I think I'd have like to take the fronts a bit stiffer. I didn't realise on the day that my F and R adjustments were a few clicks apart as I'd been making small incremental changes through the day. If I realised it was 5/2 I'd have tried at least one session with 4/2 to see how things changed. 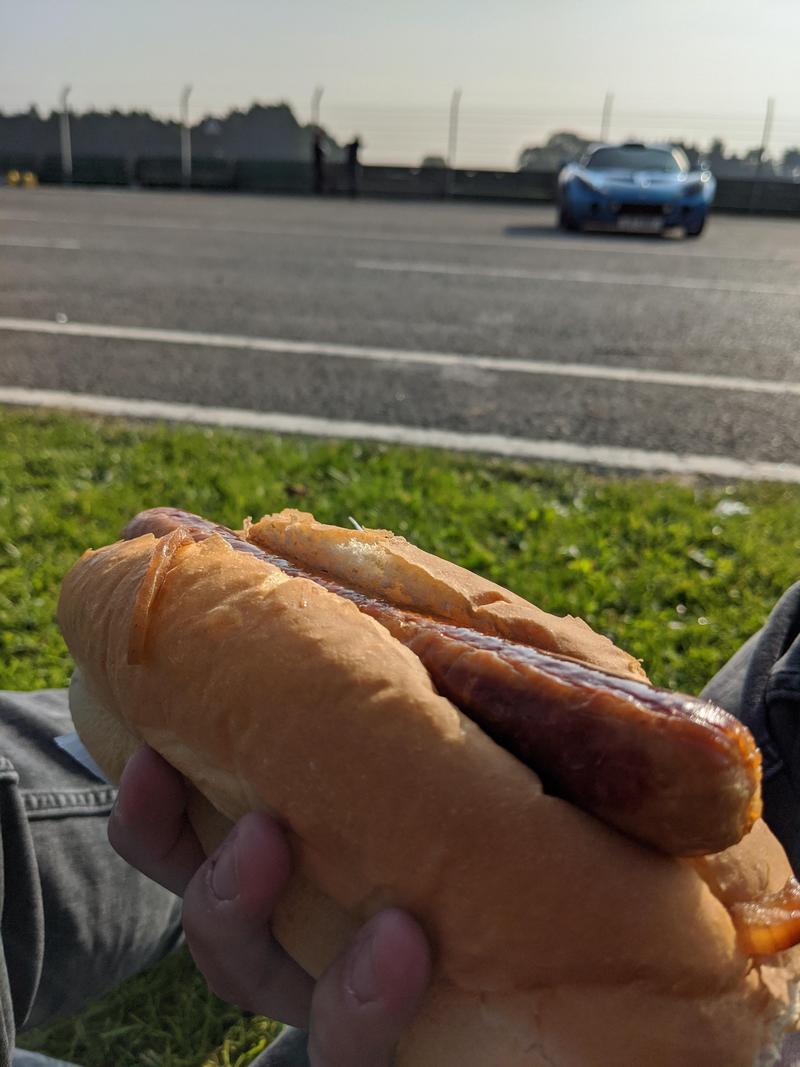 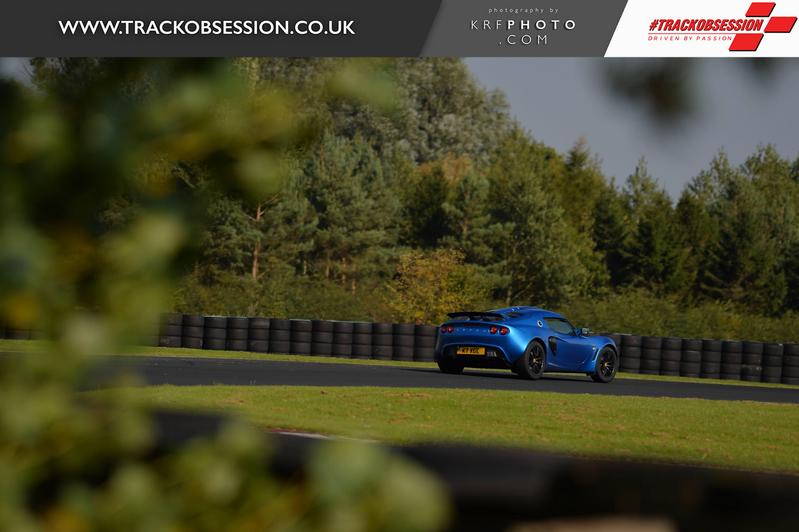 My last two sessions were both brilliant, but I could feel the brakes starting to struggle a bit. I initially thought it was just the fluid getting too hot because the pedal was just going a bit long. I got a bit of footage from the penultimate session:

On the final session I pretty much had the track to myself along with a race prepped MR2. I was obviously a fair bit quicker on the straights but it was clear this guy had a few things to teach me about commitment through the faster bends so we settled in for a few laps, I would give him space on the straights and then we'd follow through the rest of the lap quite closely. We then swapped places and did similar until his tyres faded and my brakes felt like they'd had enough. Unfortunately the GoPro batteries died quite early into this session so didn't capture any of the good parts, but despite being "not the fastest" laps it was great fun following through and pushing each other on a bit.

As the car cooled down on the way home the brakes started making all sorts of weird and wonderful noises - analysis the following day suggests I got about as much as I could have done out of the RS14s... 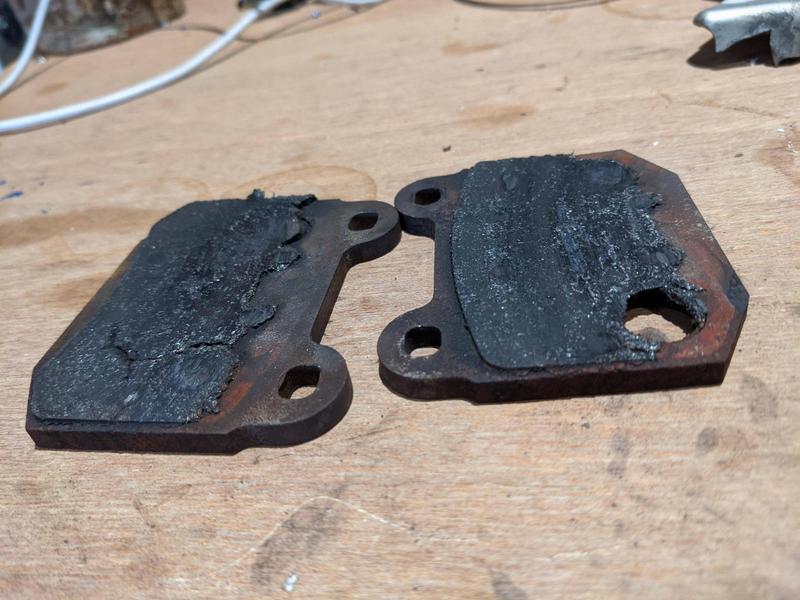 These have lasted 5 months and 5 trackdays, I don't think that's TOO bad but I'd like to try a different pad next to see if I can find something a little harder wearing. Even if it punishes my discs a bit, as currently they look unharmed in 2 years and 10-12 trackdays.

I've raided my box of 'get me home pads' to keep me going for now (stuck in the EBC red stuff I got with the car and OEM Brembo rears...) while I canvas some opinion and take a punt on the next brand. 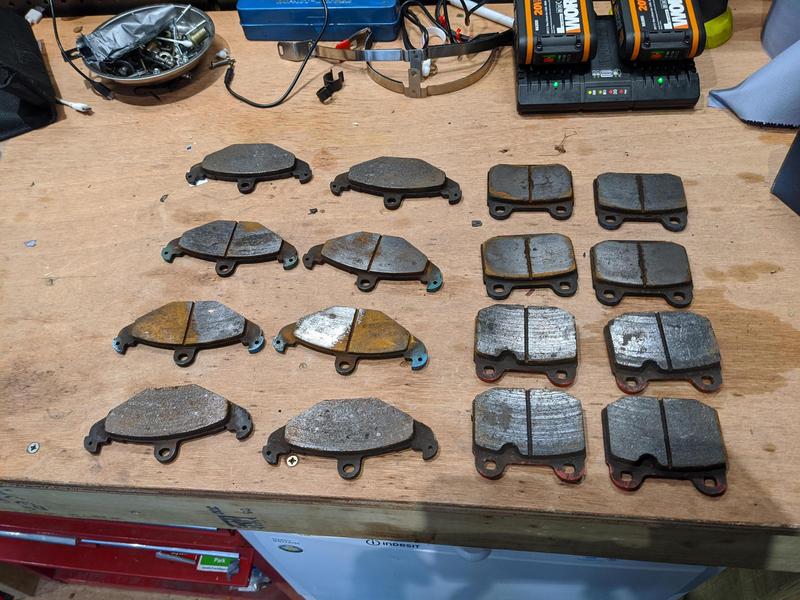 On the ECU front, nothing really to report - car pulled hard and fast all day. I monitored gearbox temps again and it feels like the temps are "settled" at 80degrees C, that seems to be the status quo with regular road driving, then once on track it seems to gain approx. 2 degrees per minute and my sessions usually average 10mins of 'hot lapping' which is consistently seeing me peak at 100deg. On the later sessions I had a longer one, and this pattern continued up to 112-113 degrees so it's reasonable to think that a 20-25min session (way beyond my physical capabilities...) would see temps spiking to dangerous levels.

You were flying on that session! Looked really impressive.

you will not go wrong with performance friction pads, bit dusty, but the best pad i used on my Exige and I tried loads over 10 years
Top

Good news about the gearbox temps as well. Great information

According to GoPro I was going about 3 sec quicker than earlier in summer.

So far everyone is making recommendations of whatever they use, so I've had pretty much every brand recommended of course

The PF however seem to be the one recurring one, and I've also got a friend who is getting about 4x as track mileage out of his PF08s than I am on my RS14s so they've got to be worth a shout...

PF01 front and PF97 rear I think, but I might be hopelessly wrong, in fact probably ignore me completely, I used those for 4 pots up front and 2 pot rears! Or I might still be right.

Calling @JDS to remind me of what is the right compounds, he used to always supply mine.....
Top

As per my thread in the tech section, I suspected my aux belt tensioner pulley may be struggling a bit. In hindsight it was probably my imagination but the soundtrack of my car at idle had subtly changed after Croft, it seemed to be coming from the belts and the tensioner had some signs of weapage. 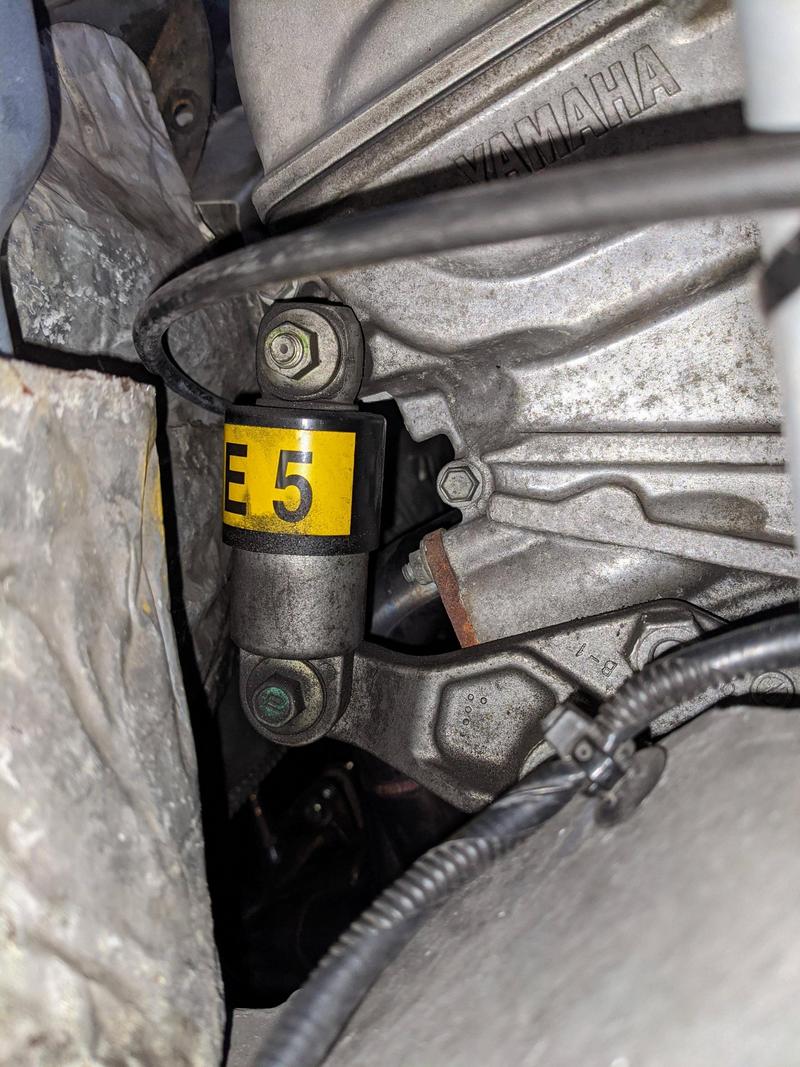 I can only assume it's time served 'beyond optimal range' contributed due to the alternator not being bolted up right, and my belt requiring extra tension for all those years/miles but maybe it's just one of those things. In any case, I had two options:

1- Replace the whole unit (damper, arm and pulley)- pricing starting at ~ £120 for SKF or many times that for Lotus/Toyota, would also mean undoing engine mounts and lifting the engine for clearance.

2- Replace just the damper, not available through Lotus/Toyota but SKF do one for £40.

Obviously went SKF, mainly due to the easier swap rather than the cost.

Whilst the aux belt was off, I ran the car for a few seconds and I think the noise was still present... I say think, because I'm now starting to believe I was being overly attentive to something that probably has always been there...

Anyway, the old one was definitely 'passed it' because when I compressed it on the bench with a g-clamp, gunk came out of it. 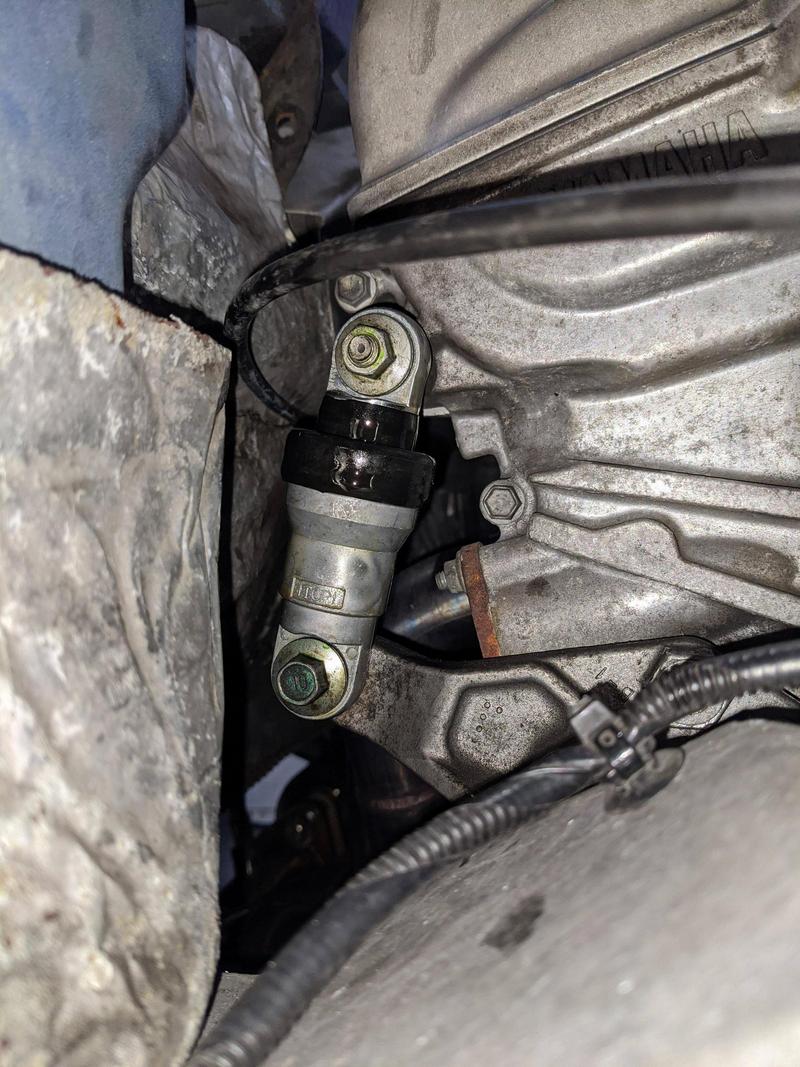 With that done, onto my brakes. I posted the photo of my Pagid RS14 remains after Croft and I thought I'd give all four calipers a good clean out ready to accept the replacements when they come. I had to pop a double take when I saw the OSF disc.... 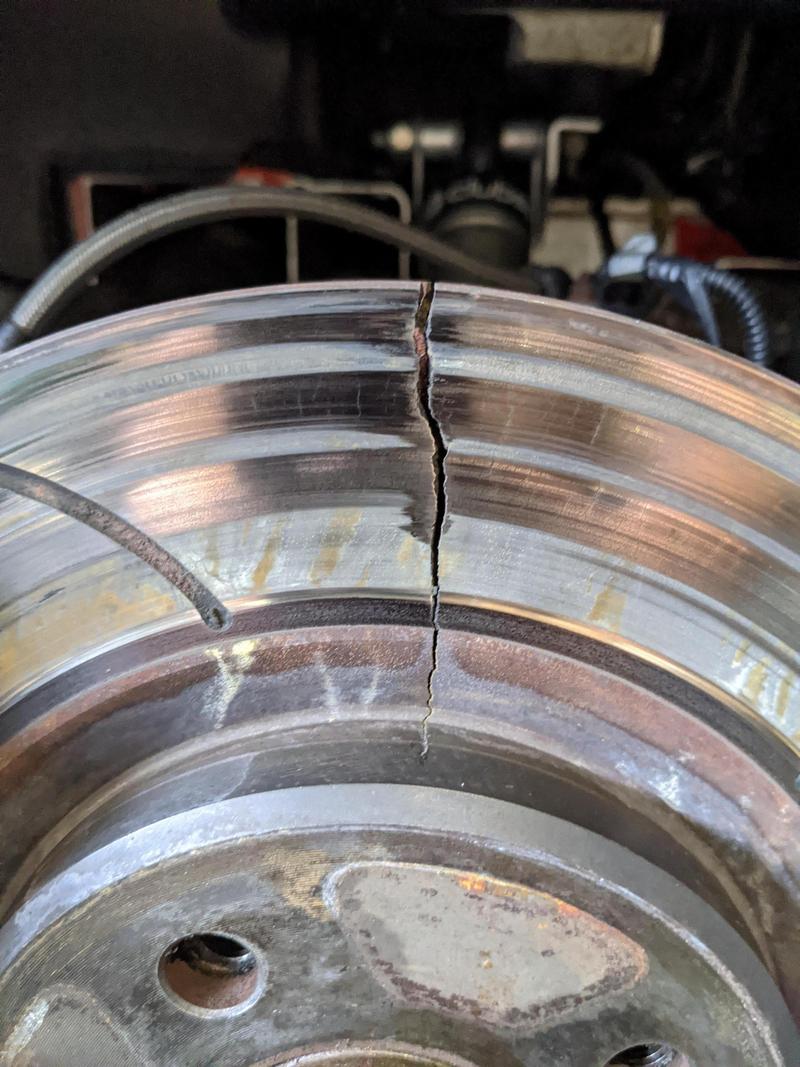 This could actually be good news. I've never been THAT happy with the brakes since fitting RS14s, their ultimate performance was brilliant, far better than the RS42s but on partial pressure they had horrible vibrations, that no amount of bedding in (or trackdays) seemed to resolve. In hindsight that was almost certainly down to the disc itself, before it cracked I imagine it was probably not running true on its way to failure. It also explains the heavier pad consumption on the OSF corner, the others are still 'almost dead' but I could have maybe got one more trackday out of them had the wear been even.

So hopefully now with fresh discs and pads, I'll be well on my way.

As for the replacements, Seriously Dave to the rescue - no attempt at all to blame the failure on me/track abuse/poor maintenance/etc - just a straight up "that's not right" and replacements were with me 18 hours later. Failures happen, but it would be so easy for a vendor to hide behind the "not covered for track use" bollocks that certain other vendors do around the Lotus market... 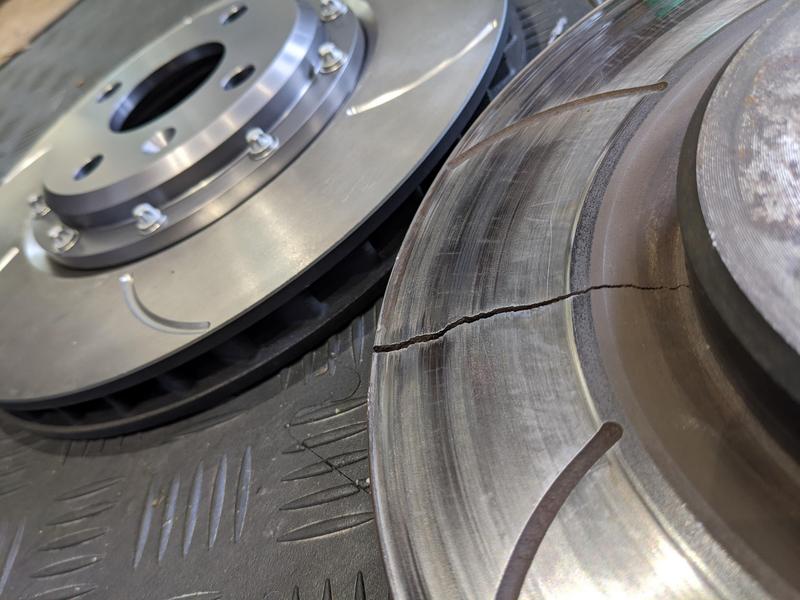 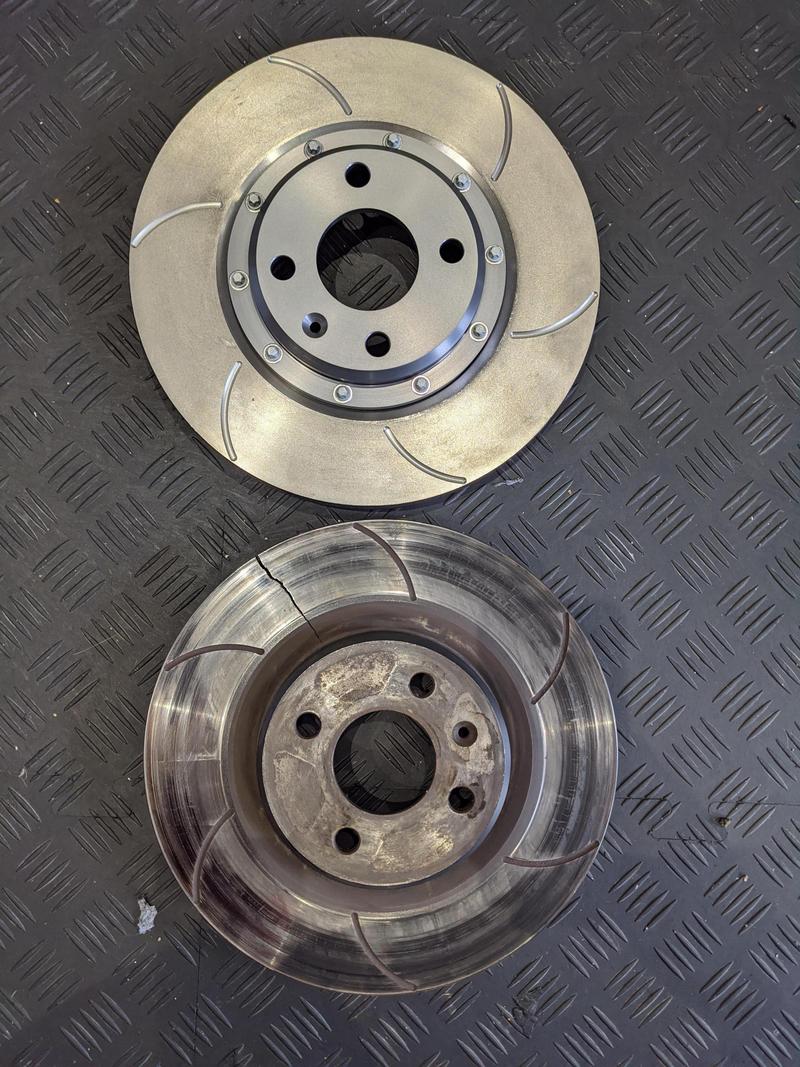 Obviously the replacements are different, they're just belled versions of the same blanks which were in stock and the single piece ones were not.

Woah that's a bit scary, don't want to imagine what it would have been like if that crack had propagated right though.
Top

I've had crack from the drillings on drilled discs before, but never anything like that! I ended up only running AP discs on my Exige, I must admit though the Clio gets Bembo high carbon discs that are solid, nobody really seems to do a decent package for the Clio and whilst my 4 pot Brembo callipers are ok, they are heavy and poorly designed against the AP you get on the Exige. For instance I can only just squeeze 300mm discs under 16s on the clio, but the exige I could run 315mm, this is all down to calliper design.
Top
Post Reply
604 posts