This is where we proud owners can upload information and pictures of our pride-and-joys (their Exige that is..)
Post Reply
840 posts

Loving it. Obviously lacking the pace of the Zenos I sold for it but its not about that. The handling is sublime and as a whole package the Exige is better fun to drive.
Is the 1st Caffeine and Machine? I may be around.
Top

Loving it. Obviously lacking the pace of the Zenos I sold for it but its not about that. The handling is sublime and as a whole package the Exige is better fun to drive.
Is the 1st Caffeine and Machine? I may be around.

Glad to hear you’re enjoying it

It is, you’ll find the thread on here if you’re interested.
#195
Top

Maybe one little job before Anglesey...

I started the car up tonight to move some things around and had the new 'rattle at idle' soundtrack that I'd attributed to the AC compressor... but my AC wasn't running. I had a poke around, felt fairly sure it was coming from the pulley area and the tensioner pulley had a bit of a shimmy to it whilst spinning. I took the aux belt off and there's definite play in the pulley, so I've whipped that off and got a new one ordered. Luckily the pulley is a pretty standard part and dead easy to swap, but the postman only has till' Thursday night to fetch me one... so for a backup plan I've popped the dust cover off the bearing and packed it with a bit of grease. 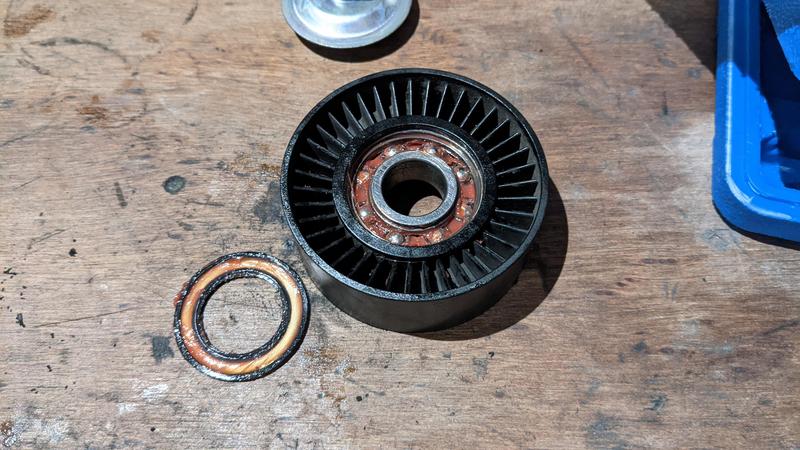 It's certainly quietened it down and taken the slop out of the bearing, but ideally I'll be fitting the new one before I depart on Friday.

Anglesey update incoming... but to complete the pulley tale: 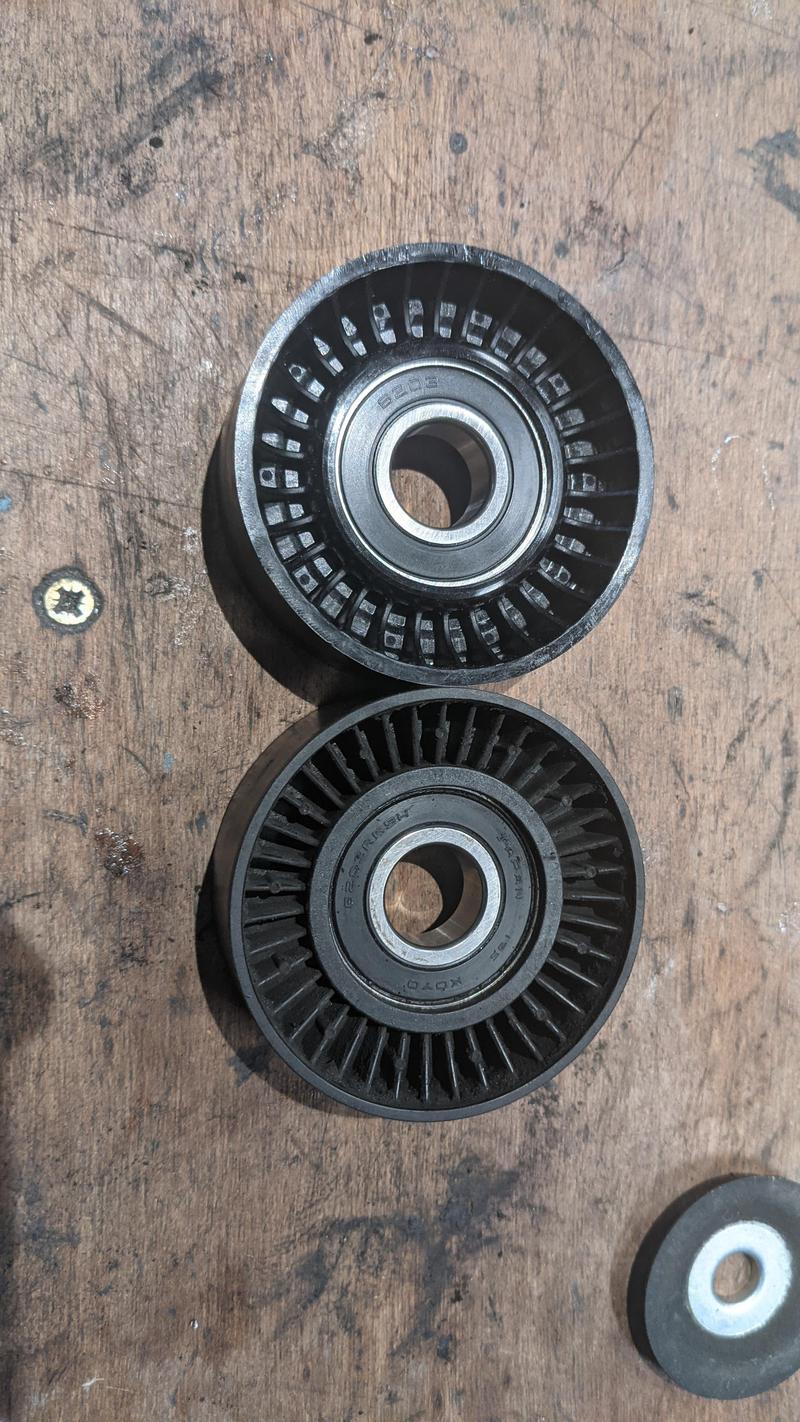 New one arrived before I set off for Wales, so got it swapped out. Rattle still occurred at idle.... hmmm, more on this later - but I couldn't do anything about it now.

Set off for Wales on Friday night, in convoy with my Wife and daughter in the family car. Plan was for a weekend seeing the sights, then checking out Monday morning whilst I head to Anglesey circuit and the missus treks home.

Weather was of course glorious Sat/Sun, but the ever looming Monday forecast looked more formidable each time I dared check it.

Trackday was to be sessioned to help the circuit manage Covid limits etc, "my" team would go out second. We watched the first group tip toe around in what could only be described as monsoon conditions, and all too quickly it was our turn 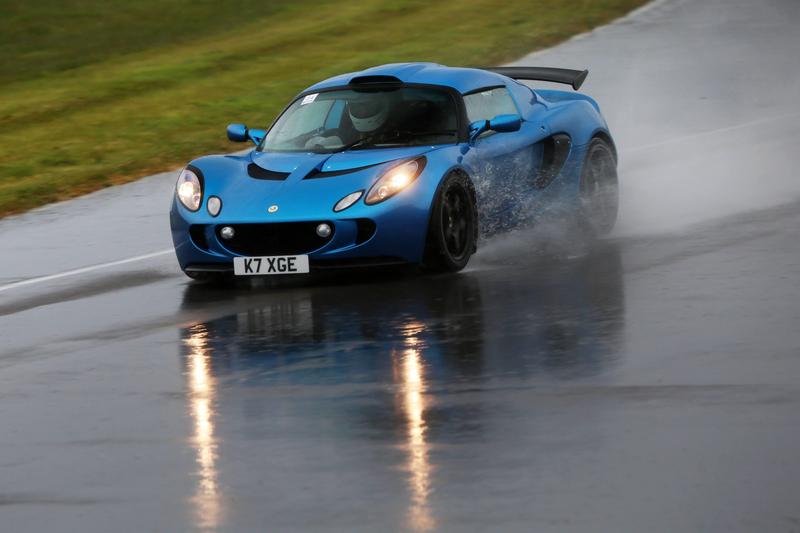 I'd made an assertive decision to enjoy the day no matter what, typically I allow a bit of rain to spoil my fun before I even get on track. The fairly worn ZZR tyres I have were a bit of a concern, so the plan for the day was to chill out on the faster bits, and just have some fun in the corners instead.

That plan worked, and I did have fun in the opening session. I was expecting to keep my sessions short but before I knew it the chequered flag was flapping (probably not even voluntarily based on the windspeed!).

Second session under way, a little damper and the wind was getting silly. You could see marshals physically struggling to stay up right, the pitboard which signalled the end of session very nearly blew away each time I saw the poor bugger trying to pick it up, but still - the track felt fun, surprisingly grippy and felt like I had to provoke the car to get it moving around a bit. Then reality had a bit of a bite, I rounded the final turn to see a good friend of mine stranded in the middle of the track with some rather damaged bodywork. Our first red flag of the day, no injuries and a positive attitude - but a pretty bruised up Lotus limped back to the pits

I missed the next session just because I wasn't quite ready for one yet... so we used the time for a damage check on our fallen comrade (it later limped home, so nothing too bad structurally) but then running was pretty much halted completely. The marshals literally could not function, couldn't hear each other on the radios, couldn't wave flags - one poor chap apparently stuck in his cabin and could barely open the door! The weather really was that bad, people started leaving the track at a fairly regular rate from this point on but I decided to stick around as I wanted a break in the weather to drive home in if nothing else.

After a couple of false starts (sighting laps under safety car bailed out a couple of times I think), we finally got under way and the track was converted to open pit lane due to the lower numbers. I did a couple of laps but had issues with the car fogging up and had to creep back in, harnesses really can be difficult when you can't reach the vents and/or blower controls! I pretty much decided to pack up at this point, but just as I headed for the circuit exit - the wind stopped, the silence was suddenly deafening and the sun came out!

Car promptly unloaded and we had a final 30-40mins of pretty nice conditions.

Car felt great, I was still very nervous of the tyres so I pootled along the long bendy straight - but felt like I could lean on the car a fair bit in the slower corners. The LSD felt brilliant here, really pushing me through corners, setting up with a bit of mid corner understeer but easily controlling the attitude of the car with the throttle - loads of fun, I actually can't wait for my next wet trackday with some slightly calmer conditions so I can hone this further.

Pictures are fantastic, what a backdrop. Big Kudos to https://www.jamesrobertsphoto.com/ for sticking it out for that final 40mins. 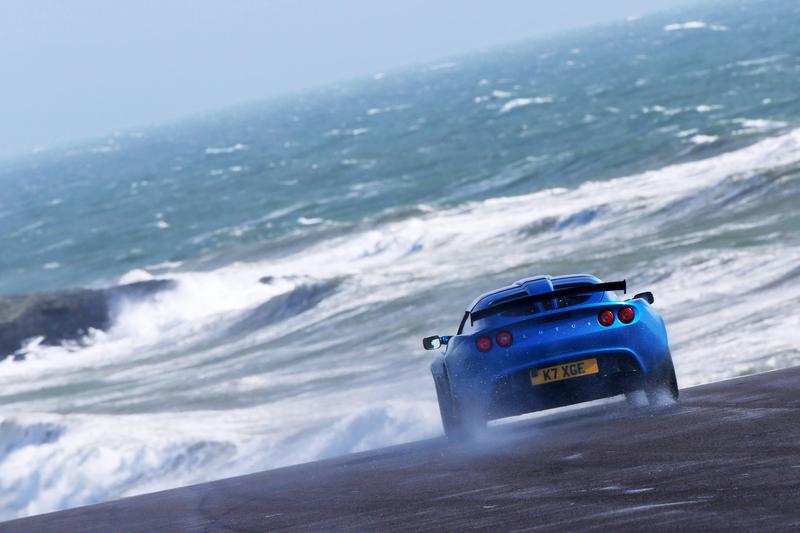 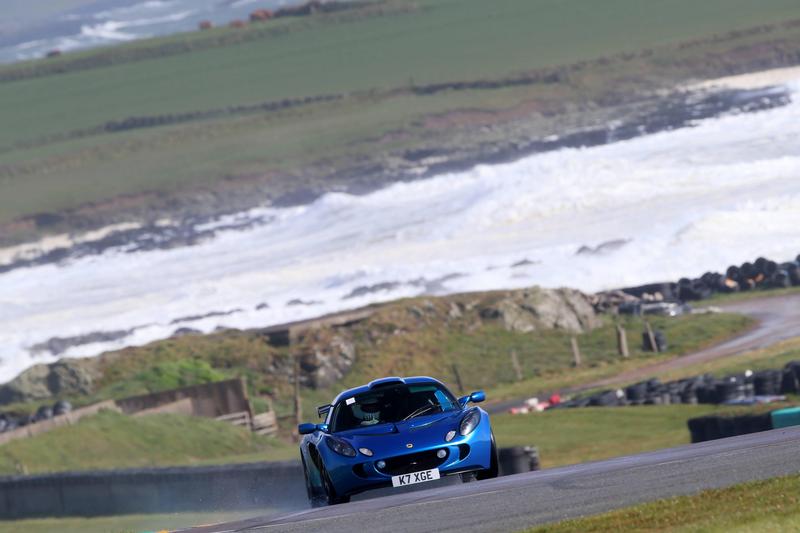 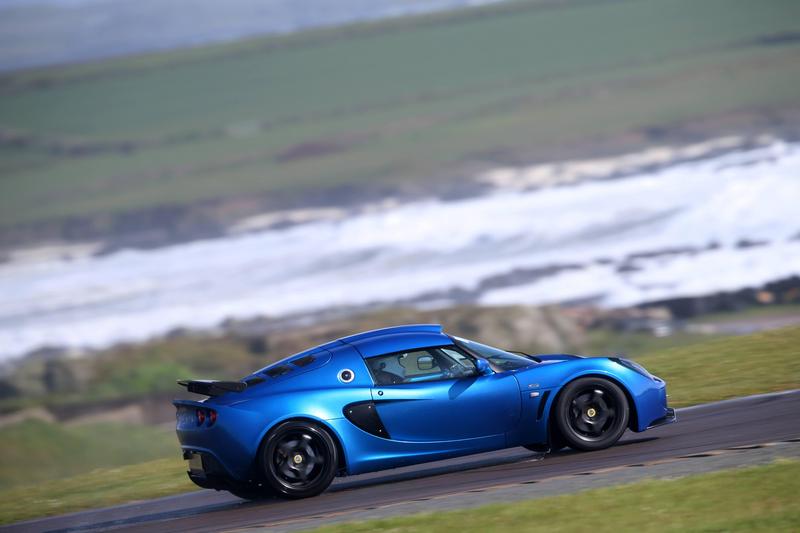 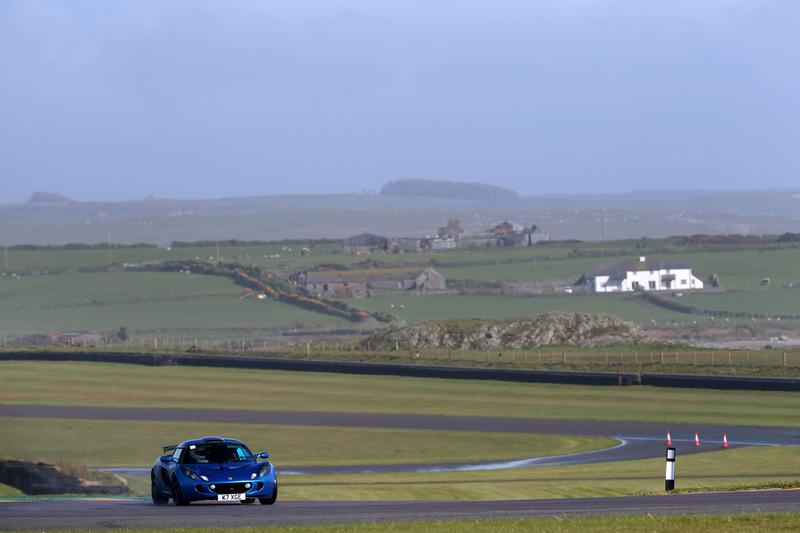 Plus some more taken by friends: 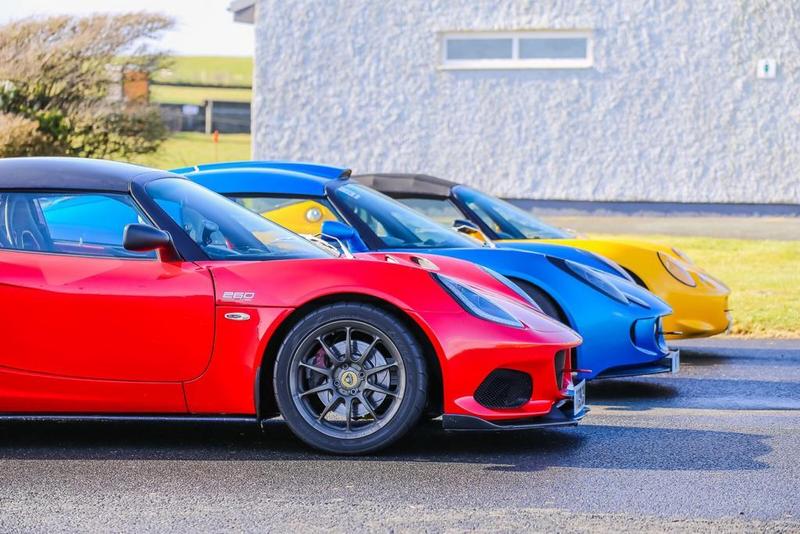 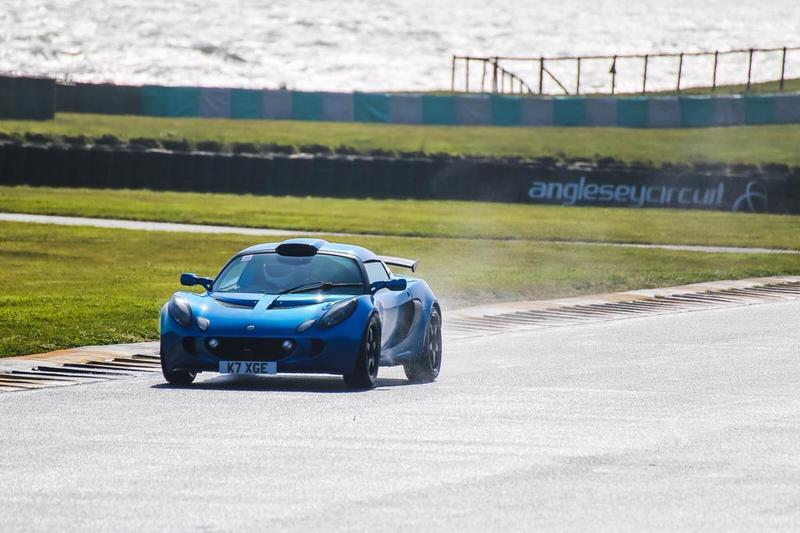 Throughout the whole day I didn't really "play with" the car setup at all. Soft damper sessions and cold "road" pressure in the tyres. It had a good dose of understeer in the wet conditions but I could work with that, it felt 'safe' and encouraged a bit of pushing on in the corners. I really need to pull my finger out and get some decent all weather tyres on my spare wheels, I think I'd have enjoyed it even more, plus it would be considerably safer for the drive to/from track too.

LSD certainly earned its keep here, I have driven the car in the wet before, but it was very difficult to push the car through on balanced throttle without either spinning up the inside wheel or quick snaps of oversteer. Some corners I could pretty much steer through with no steering lock at all, it felt great.

I headed home feeling pretty happy, it wasn't the Anglesey day I'd hoped for - but it was definitely enjoyable.

Until.... 5 mins down the road from the circuit, the car conked out. 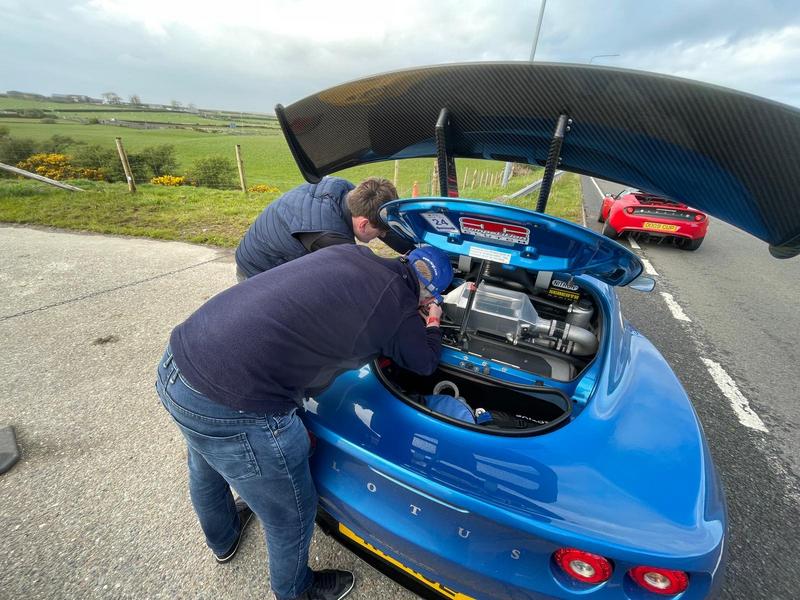 12 hours later (04:30 arrival back home) I'd been relayed back by my breakdown cover. Looking like a dead alternator/flat battery.... but more on that later, still ongoing. 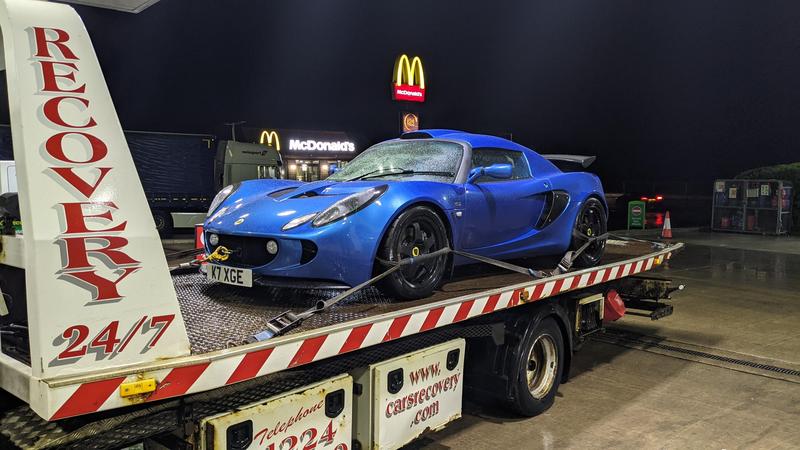 Some great pics Fonzey. Was really a great day out despite the weather!
Top

Great report. Glad the sun came out for you at the end, even if a cloud descended later in a lay-by.
Exige S1 No: 139
Top

A few miles from the circuit the car started popping and banging a bit more than usual, very burbly and then my dash lights started twinkling a bit. 50 metres before joining the A55 I felt a big loss in power so I dived off down a side road and found a layby, where the car would sit for the best part of 6 hours

Trying to restart it just gave a click, luckily I was travelling in convoy with some friends so they came with a rescue attempt. Multimeter showed battery was on its arse, so started suspecting alternator. Rewind a couple of days and my failed attempt to fix my 'idle rattle' with a new tensioner? Perhaps it was actually the alternator on its last legs, all I know is removing the aux belt stops the rattle.

I called it in to my breakdown cover (AutoAid), they don't have a fleet as such - but will ring around and get you recovered by local companies, for this distance it was always going to be a relay. Their communication was great though, and considering the late hour on a BH weekend I think they did pretty well. Whilst waiting, a DAF mobile mechanic stopped to try and help, he had a jump pack - car started on the button with that, but shuddered to a stop as soon as it was removed. This also confirmed the alternator was outputting no charge.

We had a layby dinner, then my friends made their way home. Nothing they could do now, top gear rules, etc etc.

It ended up being 3 legs home, one to Chester, another to Leeds and then finally home. It almost went smoothly, but my final recovery got delayed which meant it was 04:30 before I got home. 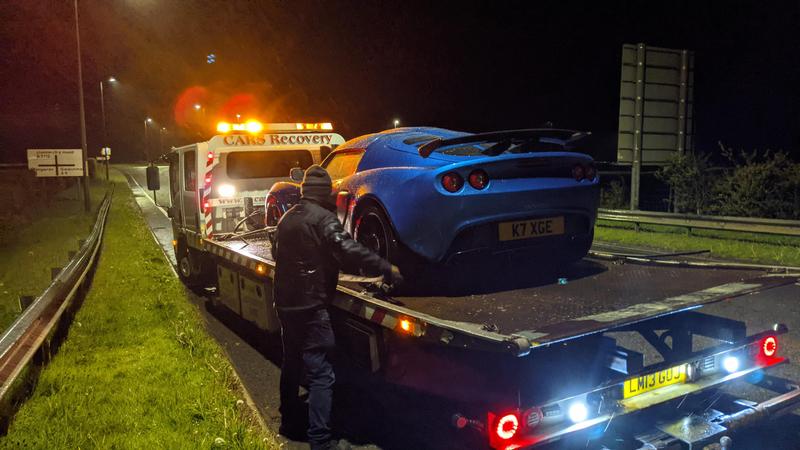 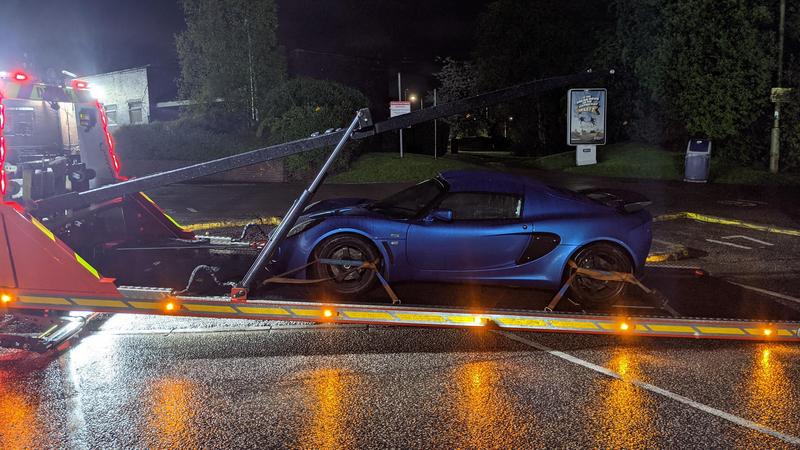 Following day after a pretty good nap, I got the car on the ramp for a nosey at the alternator and found what I thought to be a smoking gun pretty quickly: 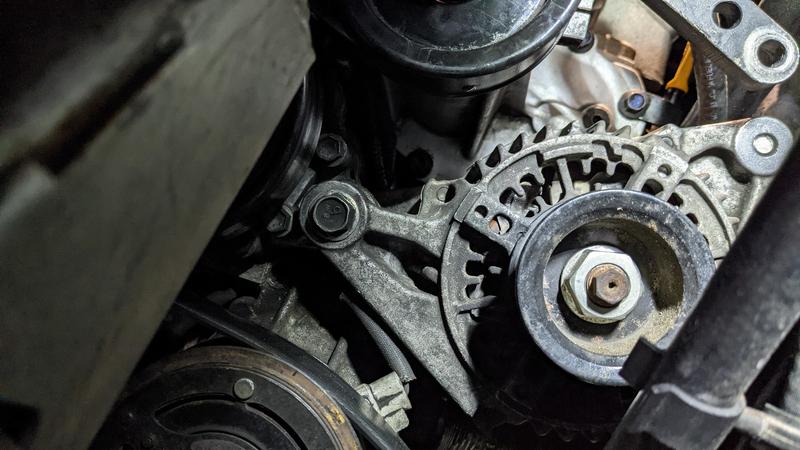 The top of the alternator is supposed to be bolted to the SC nose bracket, but that bolt had sheared. Long time thread readers might recognise this, as my car (as far as I could tell) had always been missing a bolt here and the alternator had been sat on the wonk for potentially years. Clearly the belt tensioner did its job and held tension, but still - it had failed again and I guessed that this plus wet belt meant it had been spinning and not generating?

Getting the alternator out is a massive pig, but luckily drilling out the bolt remains was easy. For the first time ever, a left handed drill bit actually worked. 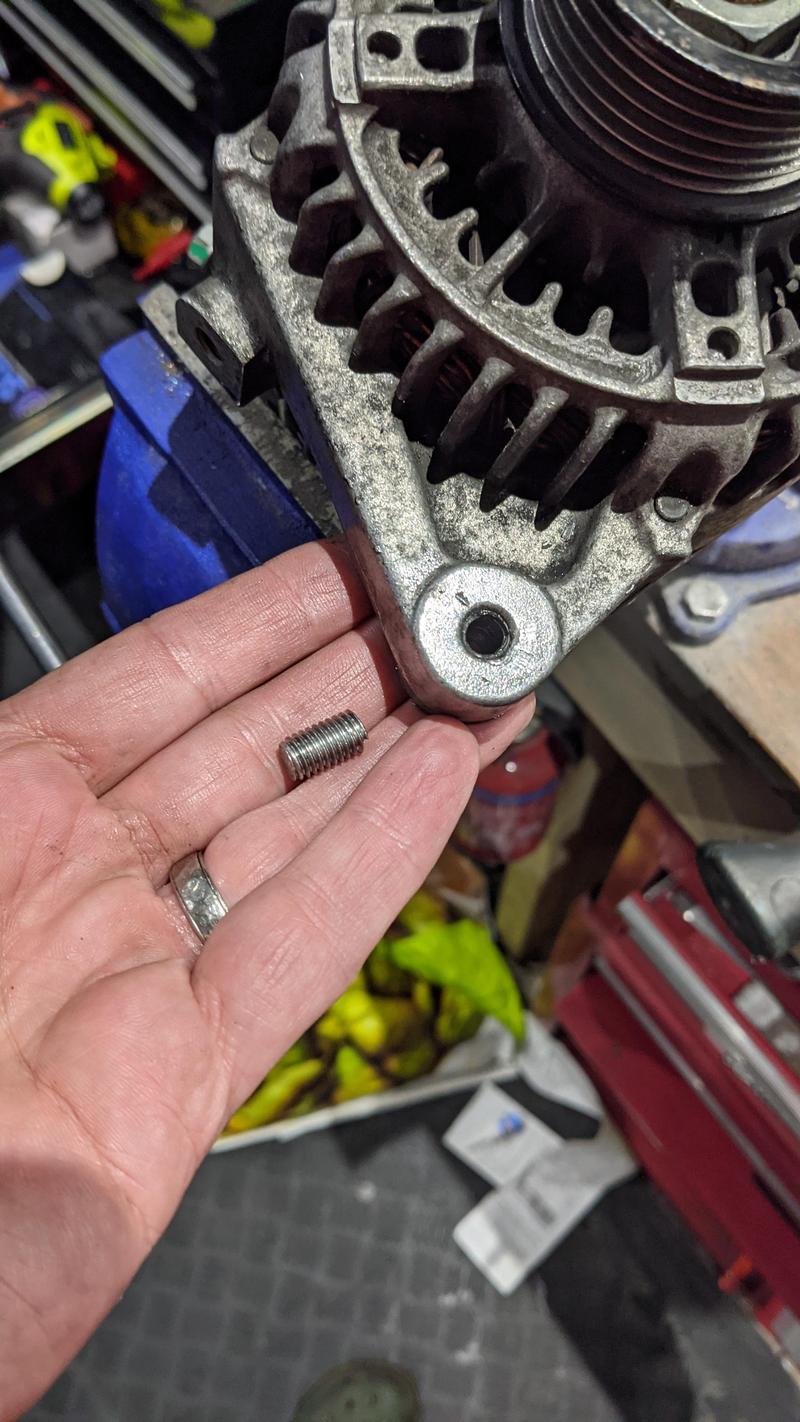 I had a trip to see Dave @ Seriously Lotus to pick up some supplies, ran my issues past him and got a recommendation for an alternator testing place on my way home. Based on how difficult it was to remove, I wanted to make sure it was OK. 20mins later, I had a report of a dead alternator! Glad I got it checked.

So I'm now wondering if the broken bolt is effect rather than cause? Failing alternator causing excessive vibrations maybe? Either way, they're hoping to have it repaired for me for the weekend... so fingers crossed. It does seem coincidental that a bolt that was previously missing has broken so soon, but as Dave pointed out - I bodged it with a nylon spacer that "just about fit" and a random bolt from my bolt box... so this time I'll put a known good 8,8 grade in, with a proper machined 13.5mm spacer to rule that out.
Top

Think I said that maybe the manually cut spacer wasnt 'square' at the end and may have allowed the bolt to has some stress in it.
Please accept my apologies if i mentioned the word 'bodge'