winthattt wrote: ↑Fri Apr 09, 2021 12:31 pm You have my map(s) now. Enjoy. I had a quick look at the maps and I would play around with the three choices. I think the maps are the same but I was messing about trying to get good idle control over temp/pressure/loads and gave up. Map 1 is fully open loop and does not use the IACV or ignition advance, it's a race car map!


Thanks again, had a play this afternoon and got your map loaded in, drives pretty well although haven't given it a full-beans run as it's been snow flurries on and off al day

. Best results seemed to be:
* stick to open loop at all rpm - I did have it set to run closed loop at light throttle and low rpm, which is mostly where it was misbehaving and popping excessively

* IACV enabled below 1600rpm which helps the idle - it was around ~800rpm without which felt a bit low
* no fuel cutoff on overrun, oddly it's less pop-and-bang-y this way

As suggested I should really get the timing properly checked, that's on the list along with checking for any exhaust leaks which might be contributing to the popping.

As a suggestion, you might want to increase your idle speed regardless, as the IACV doesn't seem to be able to control as quickly as the ECU. For example, driving slowly down a hill in 1st gear, with momentum driving the engine, there will be virtually no fuel. If you push the clutch in, the ECU won't try and catch it until 800 rpm, at which point it's probably too late and the engine will stall. I'm not sure about the Emerald, but normally you can set your idle speed up like this:

However, I believe a lot of people just ditch the IACV altogether!
Top

I’m not sure why the maps I sent you have such a low target speed for the iacv. There is no way my VHPD can idle at 800rpm, 1150 is more like it. Tbh, when I looked at the maps there were a few things that did not look right. I think the basic fuel and ignition are ok.
Top

Thanks for the comments chaps. Idle is not too bad so happy with that side of things for now.

One quick update... I've started looking for leaks but currently more confused than when I started

.
Thought I'd start by looking at the MAP sensor readings but struggling to get my head round what's going on... at idle the Emerald is showing around 95-100kPA which is surely way too high. It's either:
* a pretty massive leak
* a faulty sensor
* misconfigured/calibrated in the Emerald
* wired incorrectly

Unfortunately didn't have much time tonight but I'm will do some more diagnostics tomorrow. I did get one data log which I've just realised shows the reading decreasing with throttle/revs, shouldn't it be the other way round!? 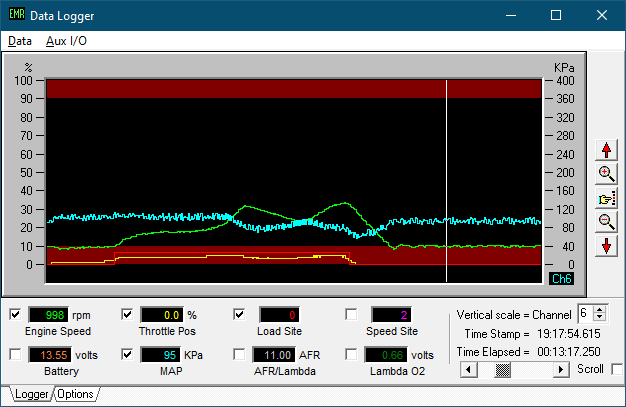 all that being said, I'm not sure how much the Emerald even uses the MAP readings. As I say, colour me confused for now

As you say, the emerald does not really use MAP but it may be indicating a problem. What Is the reading with the engine stopped, it should be about 101kPa (I think)? If you have a massive leak the engine would not idle. Much more likely is the sensor calibration is wrong, which does not matter if it’s not used.

Yes, pressure should increase as you open the throttle, may be a nuts calibration. I don’t remember setting it up.
Top

winthattt wrote: ↑Wed Apr 14, 2021 9:46 pm As you say, the emerald does not really use MAP but it may be indicating a problem. What Is the reading with the engine stopped, it should be about 101kPa (I think)?

Depends on how nice the weather is!

Maybe the Emerald uses the map for compensation in atmospheric pressure, rather than a load sensor?
Top

Well, after another afternoon of head-scratching, I think I've figured out why the MAP reading is off. Lotus used a 2-bar MAP sensor!

Which to me makes absolutely no sense on a N/A engine. I'm guessing it came out of the parts bin for the turbocharged V8 Esprit along with the ECU

Obviously I only found this out after ordering what looked like the correct GM 1-bar sensor only to find the loom connector is ever-so-slightly different. That'll teach me to triple-check part numbers!

On the plus side this might mean the original sensor isn't actually goosed and I can calibrate the Emerald as a 2-bar when I next have chance to work on the car. 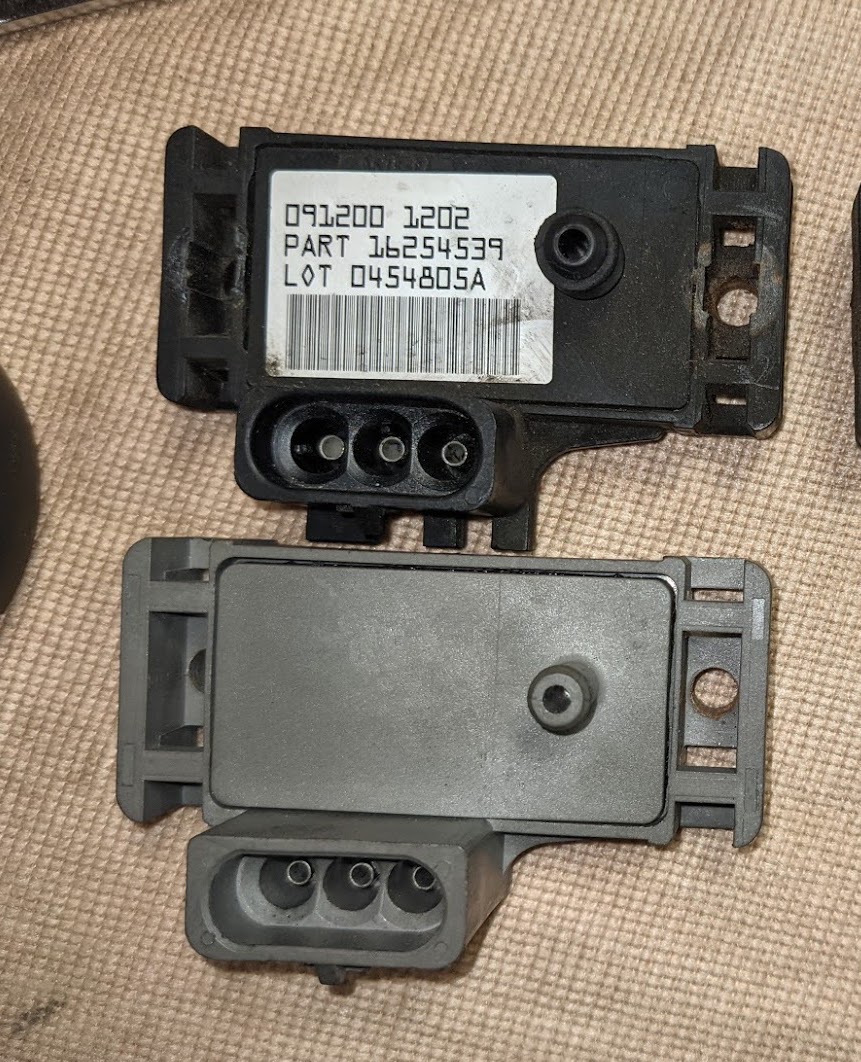 original (top), almost-correct 1-bar sensor (bottom) - there are some tiny notches in the pin sleeves which are different
Top

Bit of an update: Through a combination of Googling and bench testing, I now have my MAP sensor calibrated. Details below in the hope it may be useful for someone else in future. Tbh the MAP sensor was a bit of a distraction as the Emerald doesn't really use it, but I thought low manifold vacuum might be a pointer to underlying issues, more on that later...

Google suggested the range on most 2bar sensors equates to 208kPA at +5v (slightly more than 2 bar). It should be linear, with atmospheric pressure being around the midpoint, 2.5v (anything less is vacuum, anything more is 'boost' in a forced induction application). This is borne out by the datasheet I found for a Delphi 2-bar sensor, from which I graphed the expected output: 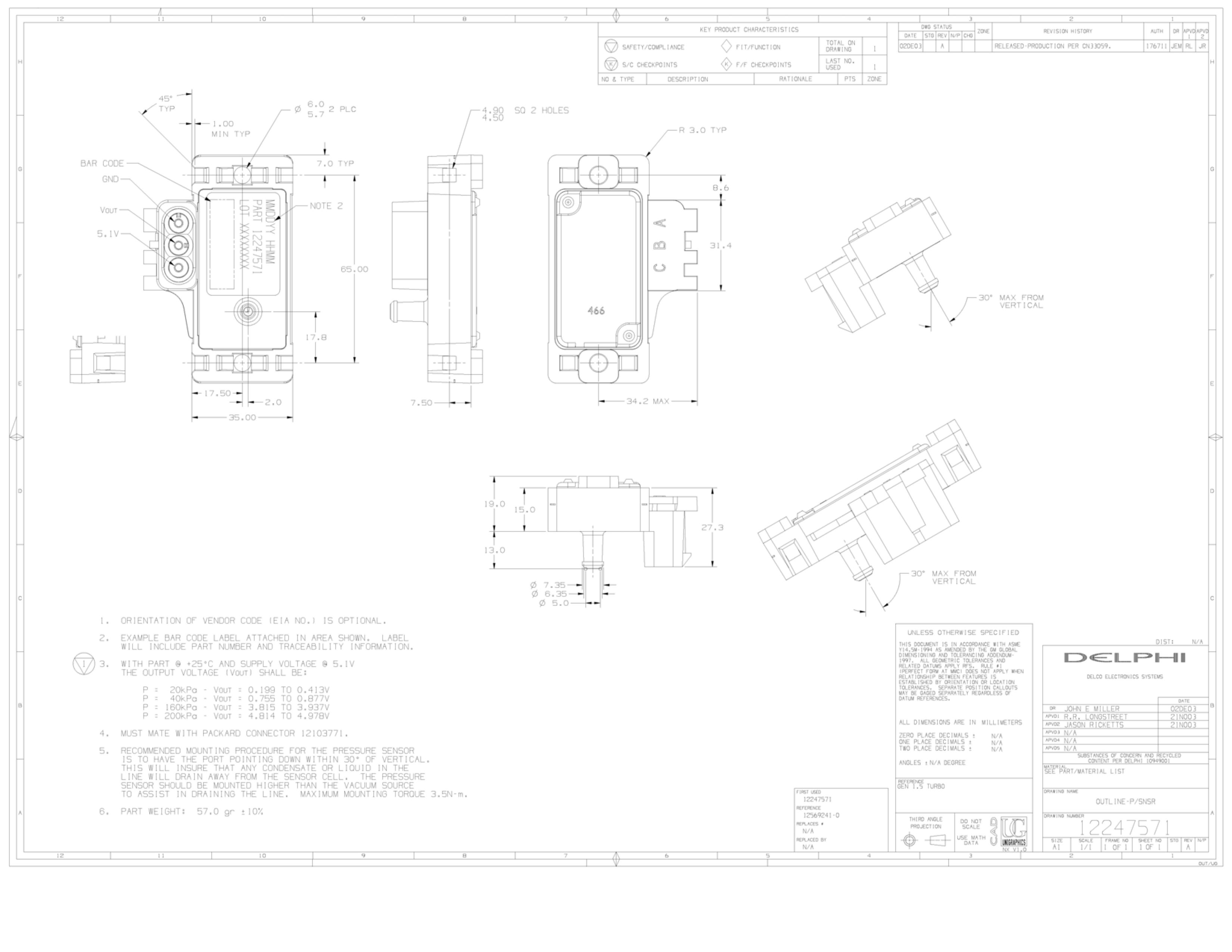 To confirm the original sensor works, I hooked it up to a 5v bench supply across the two outer pins, and measured the output of the middle pin which showed 2.32v at atmospheric pressure. (It did go up and down when I tested by blowing/sucking through a bit of windscreen washer tubing, so the sensor still works).

Based on the graph I was closer to the lower bound of the range so I went with the following settings in the Emerald software:
Range (kPa at 5v): 208
Offset: -0.181 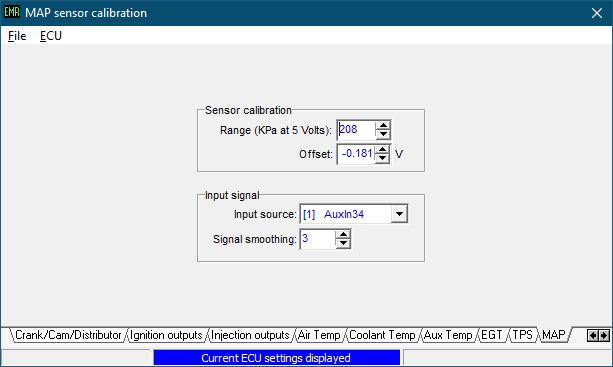 Hey presto, it reads near enough 101kPA with the engine off. The trusty old barometer in the hall said it was 1006 millibars (100.6 kPA) so close enough. 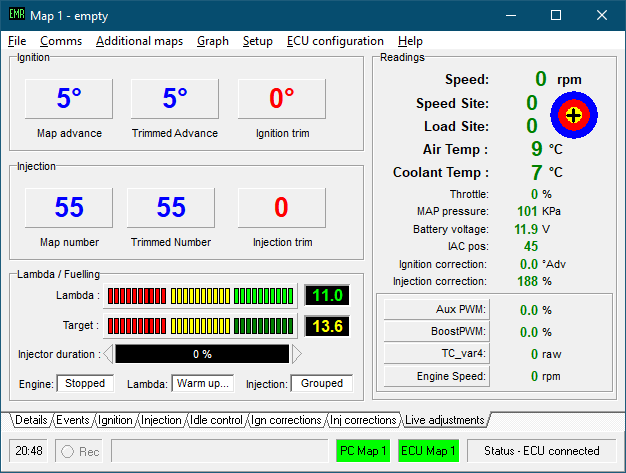 Once I got a proper reading from the MAP sensor, this left me pretty sure I have low manifold vacuum. At idle the MAP reading is around 75-80kPA which is not great (left the data plot on my other laptop). I've since checked all the hoses, and hooked up a manual gauge (thanks, eBay!) to the spigot on the intake which marries with the sensor reading: 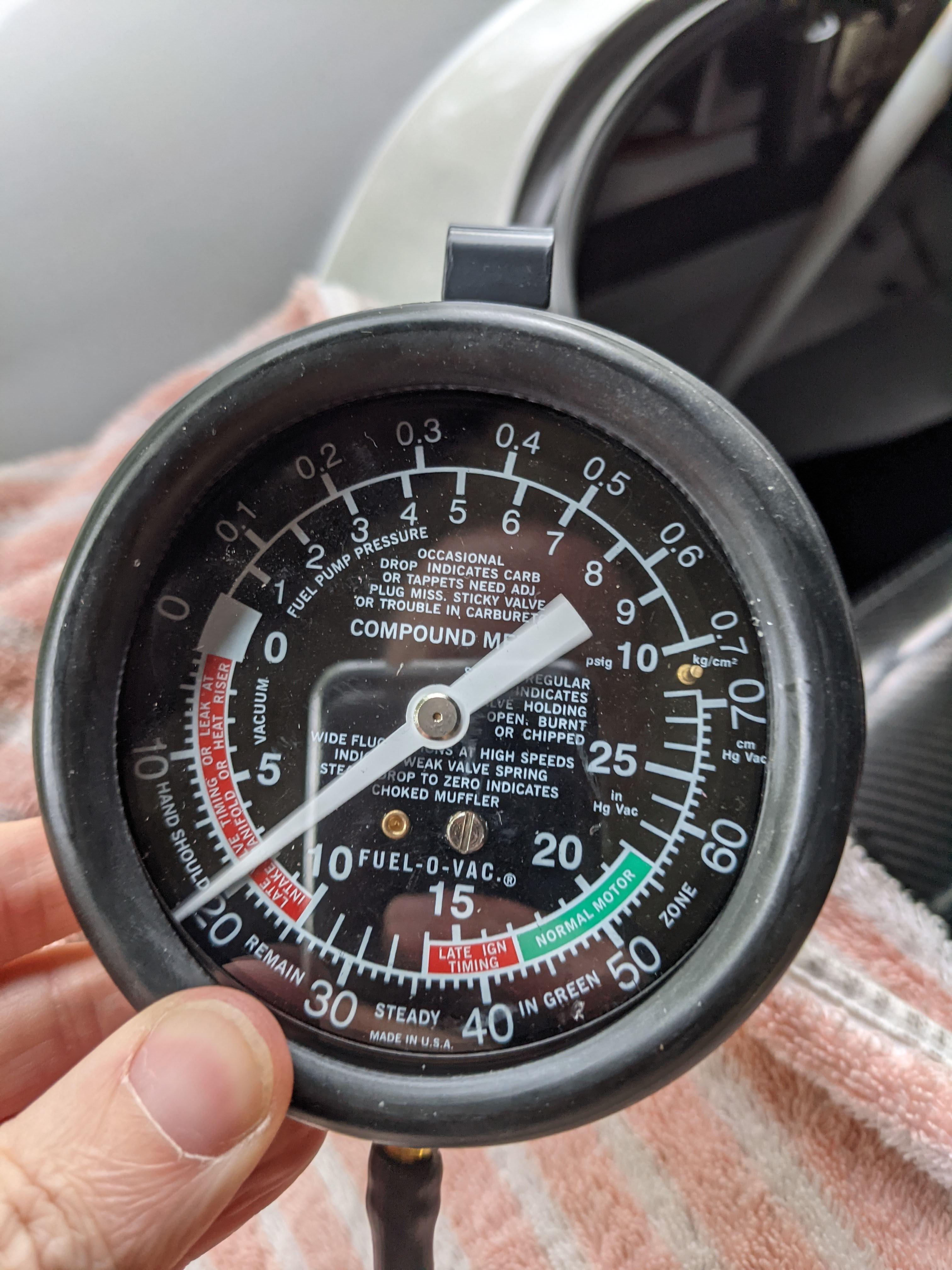 Also did a compression test which looked good (I think) - near as dammit 160psi across all four cylinders (cold).

So I'm back to either:
* valve or ignition timing is way off
* intake manifold gasket leak

Time to call in the professionals I think!

Edit to add: compression is actually a bit low for a VHPD?