Watching with interest I am about to start the same with mine. Just sold my clams so about to order Dom’s.
Top

Good to see the car being used in anger! Not seen snapped rear upright bolts before, Looks nasty! Had they been over tightened in the past?

Keep up the good work.
Top

Yeah I drive it quite hard, probably why I'm not too surprised when it breaks

although it has been fairly good for me regarding that.

Maidstone said they were aftermarket bolts and didn't go through the same hardening process the OEM bolts did. Little concerning but both sides now changed and I'll drive it as hard as I did before!
Top

More bits I was able to source: 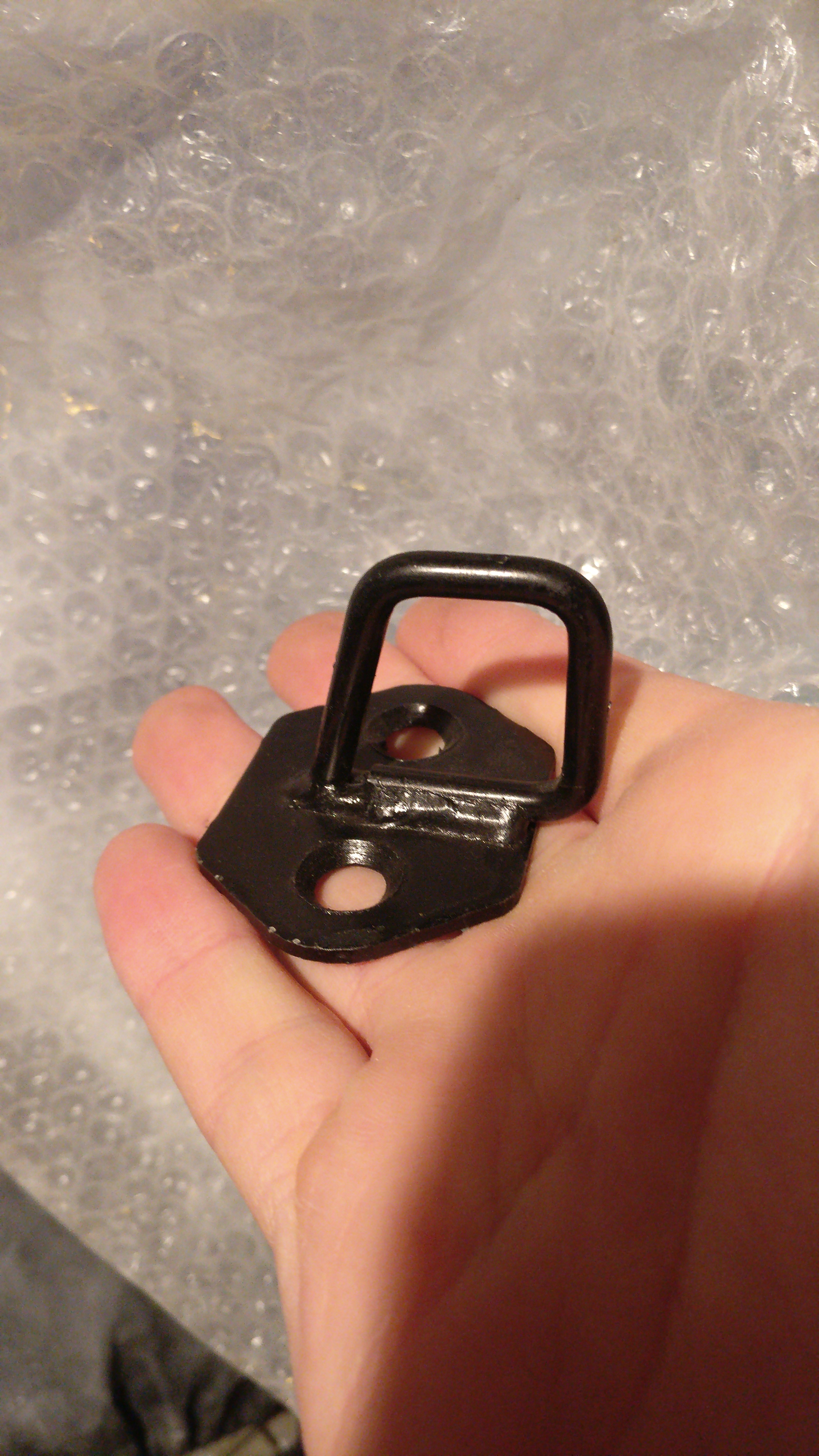 Striker latch thanks to Junks 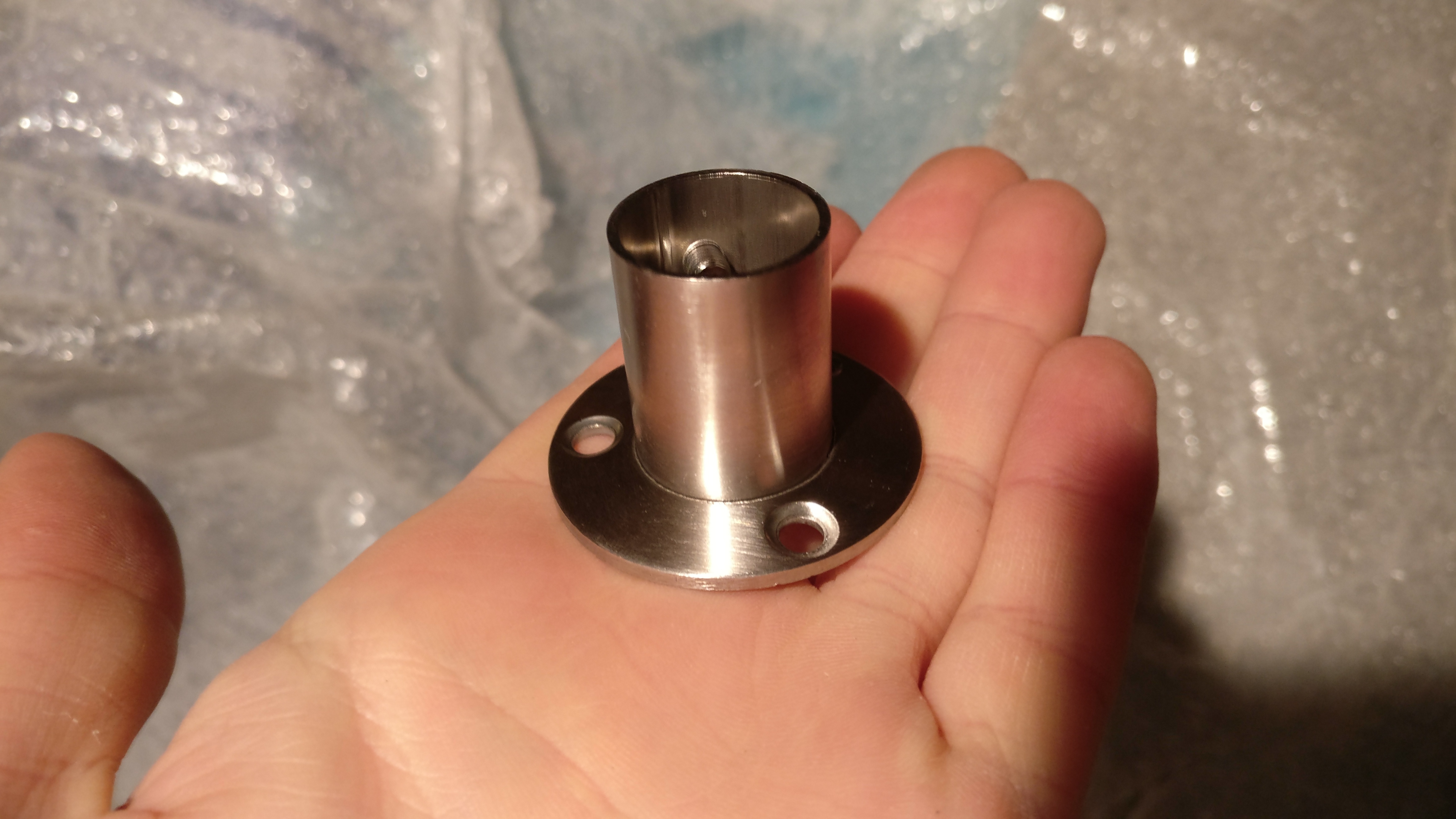 For the rear clam drainage pipe I got a very cheap wardrobe bar holder. Pretty crude but will do the job once bolted on. 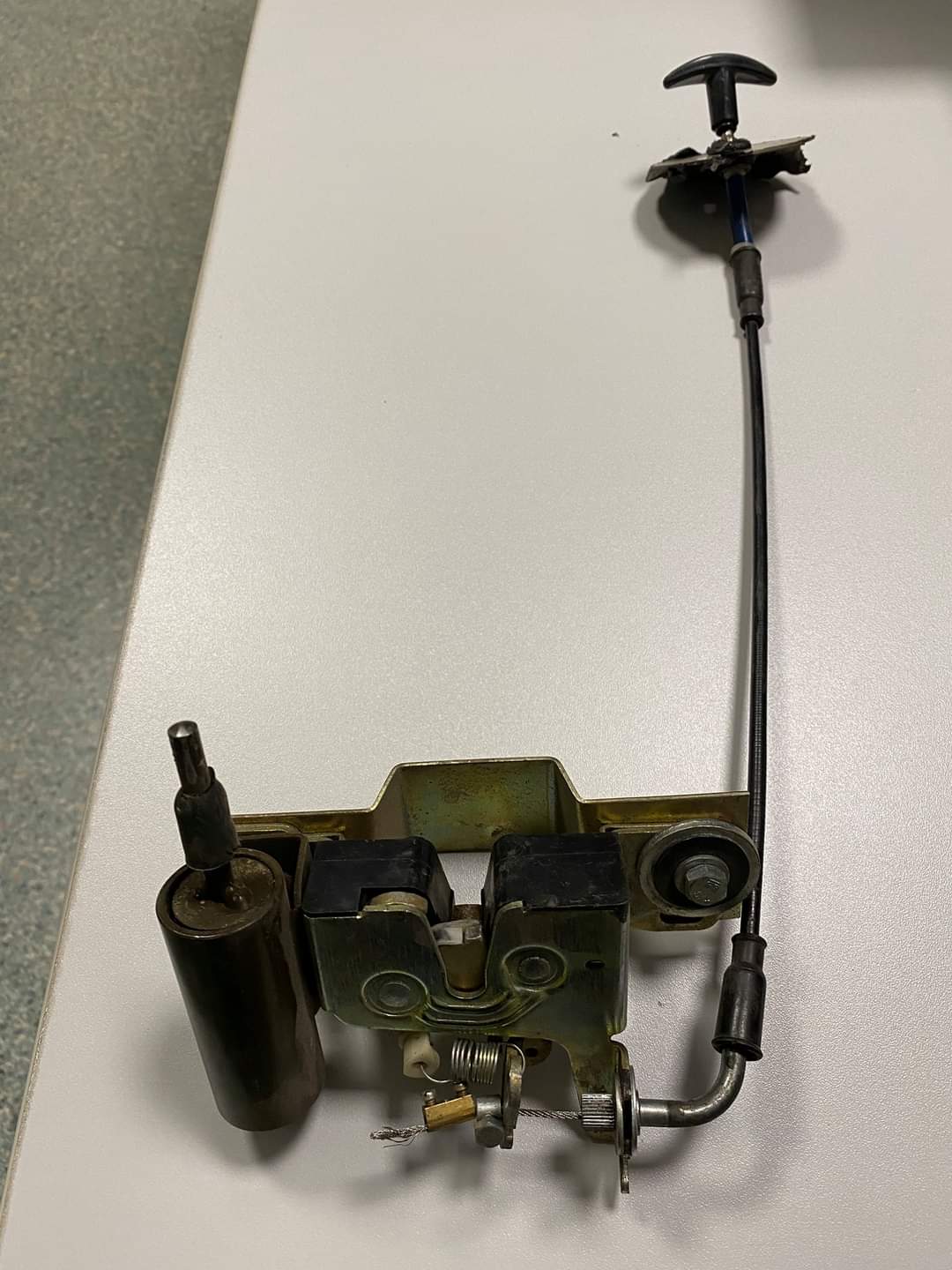 Thanks to Karl for a nearly complete latch mechanism, saved a lot of hassle. 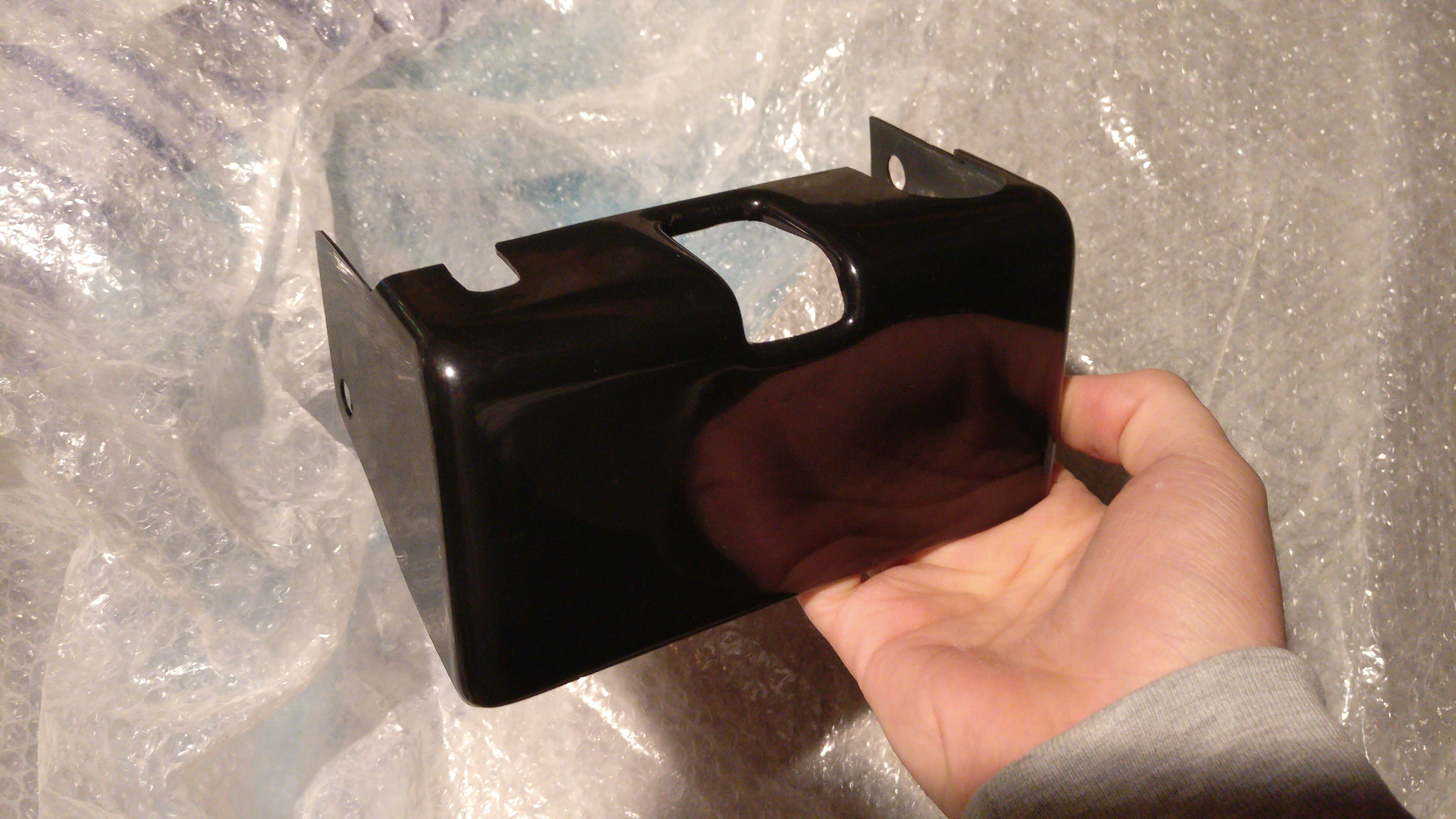 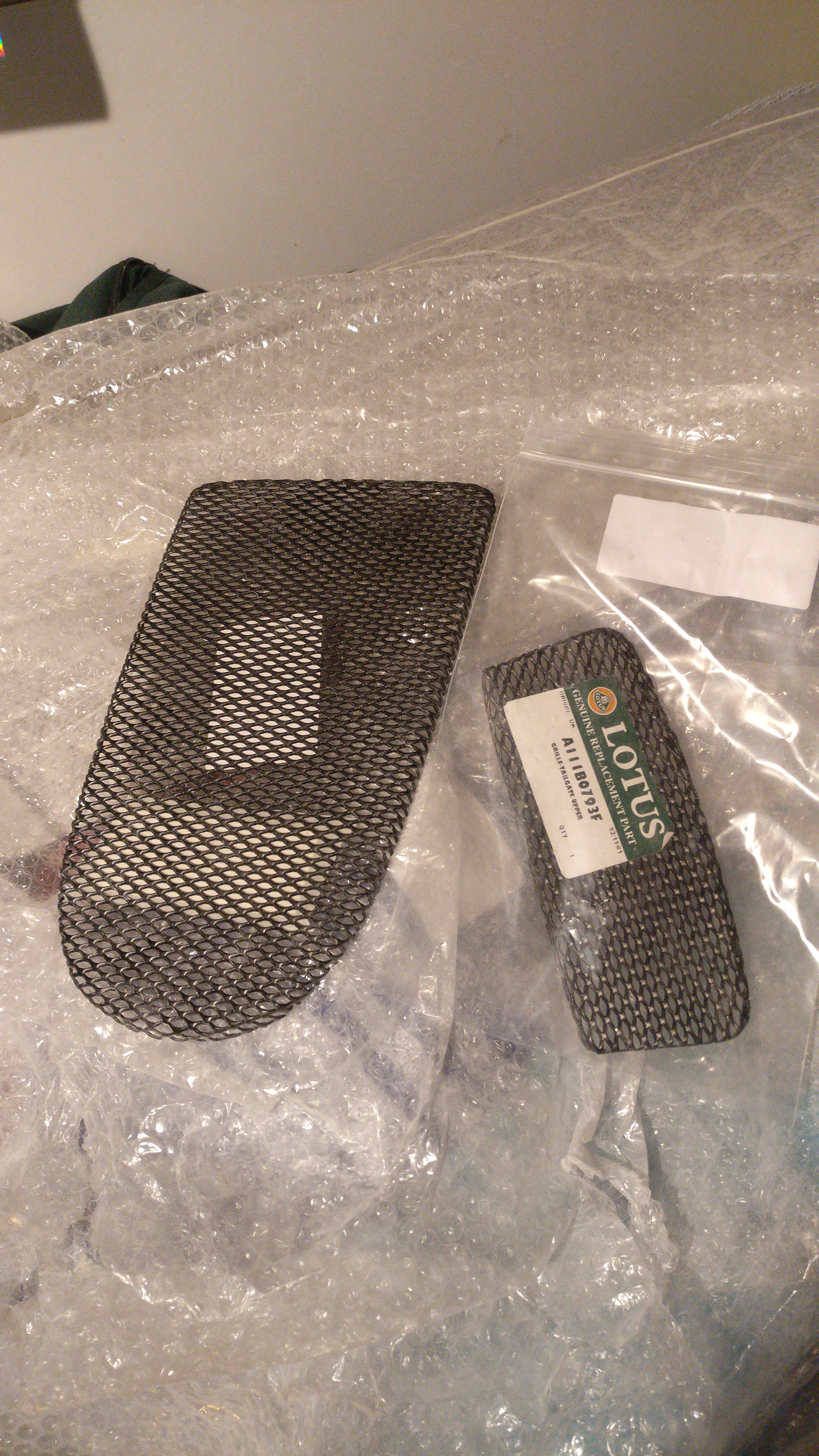 I know I could have just made these myself, but to save some hassle just bought genuine grilles for the roof and tailgate 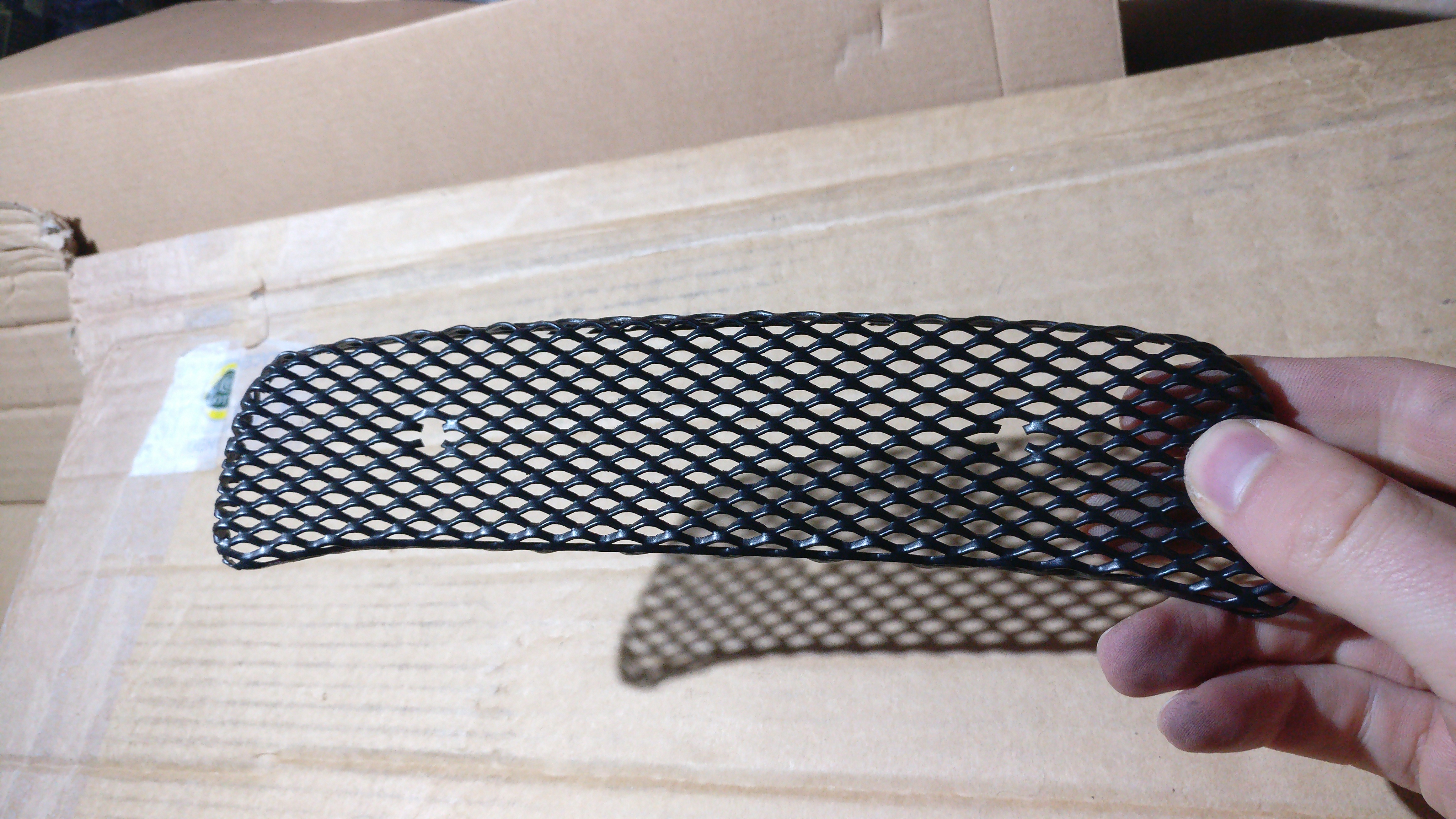 I did initially think of taking out the mounting bars in the roof intake to keep a cleaner look, but when the grille came with holes for mounting I had to keep them, not the end of the world 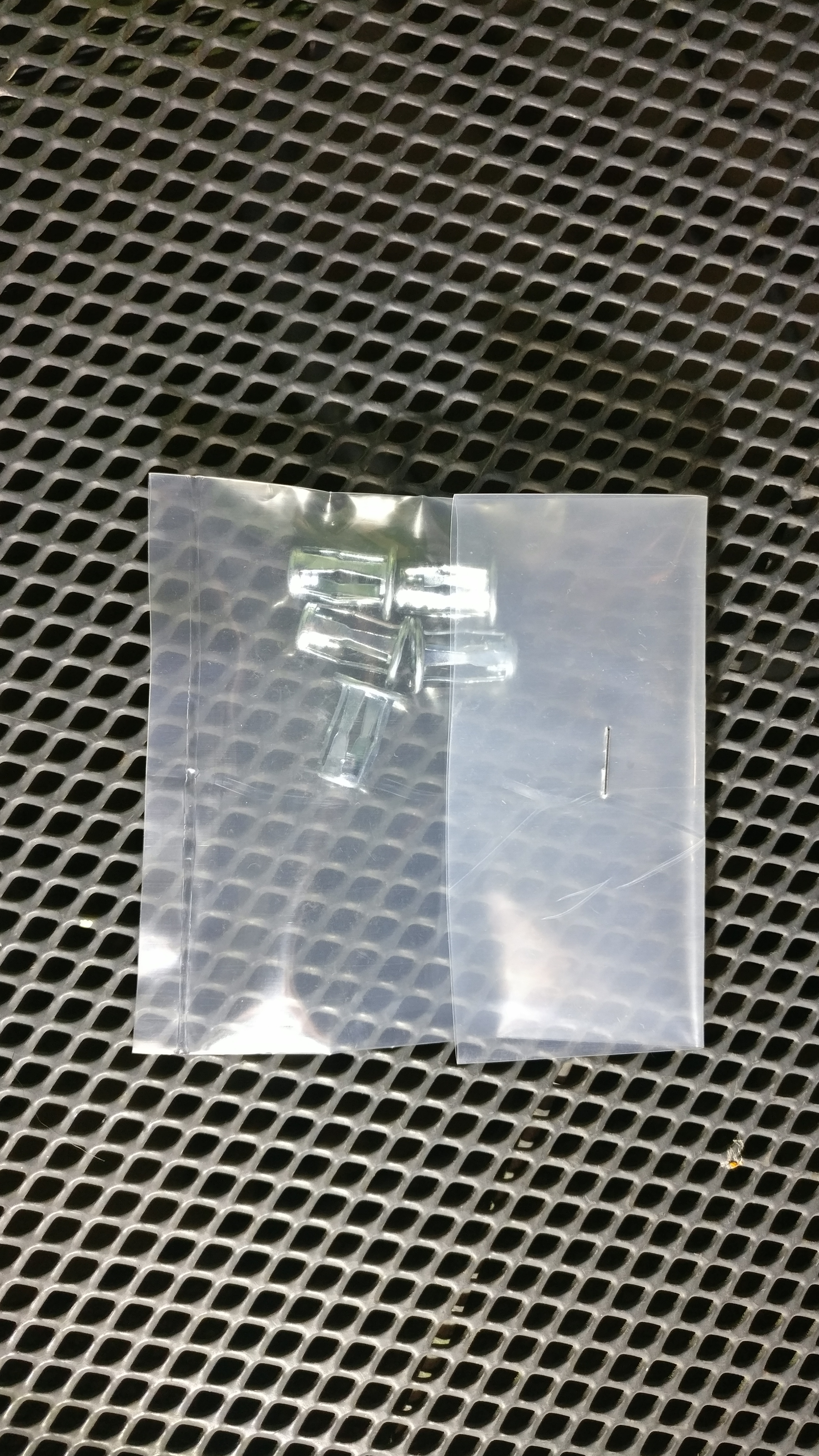 M5 jacknuts for the roof 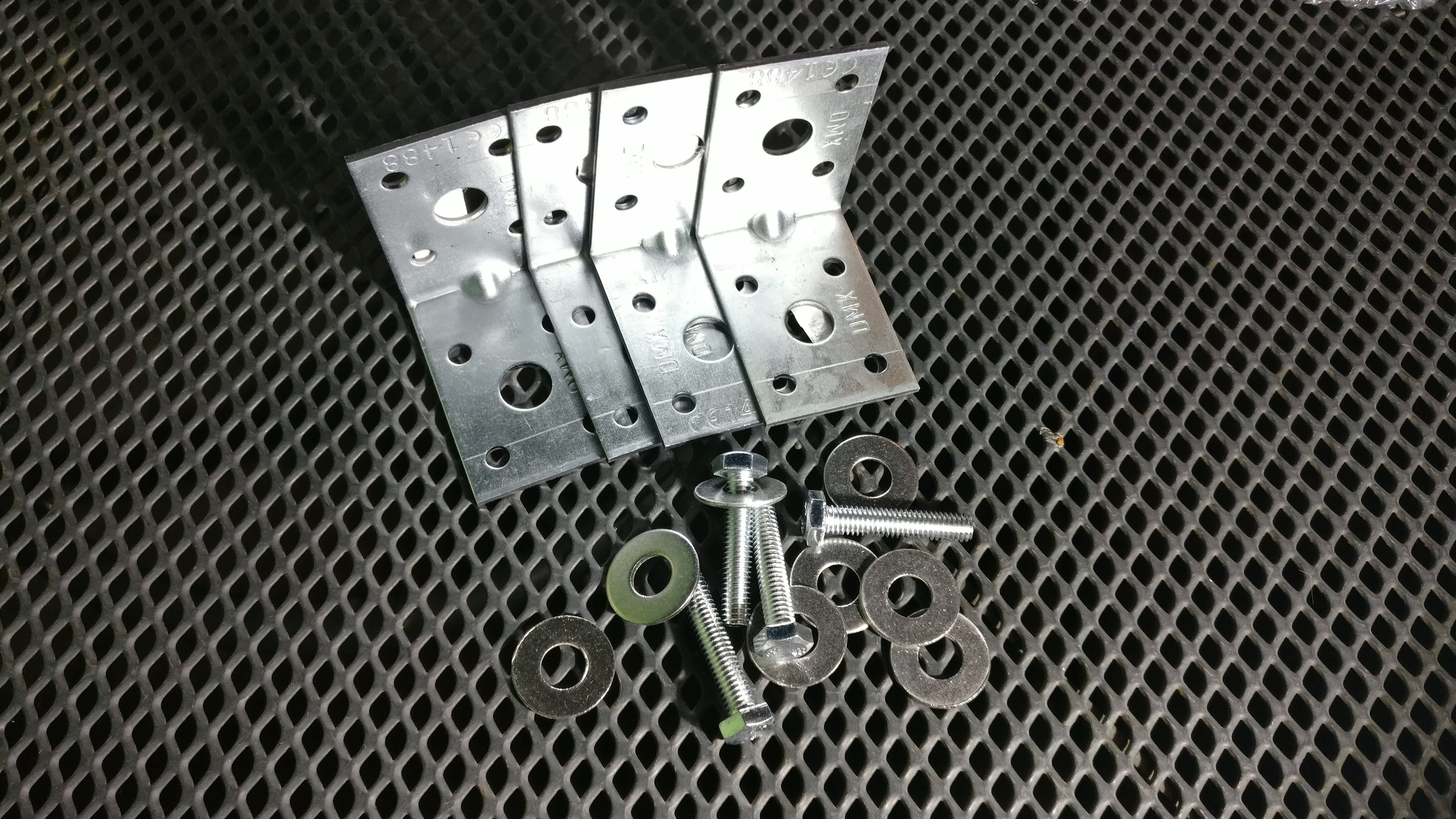 I wasn't paying over £60 for the spoiler support brackets, so these £4 ones will do just as good once bolted to my DIY sheer panels 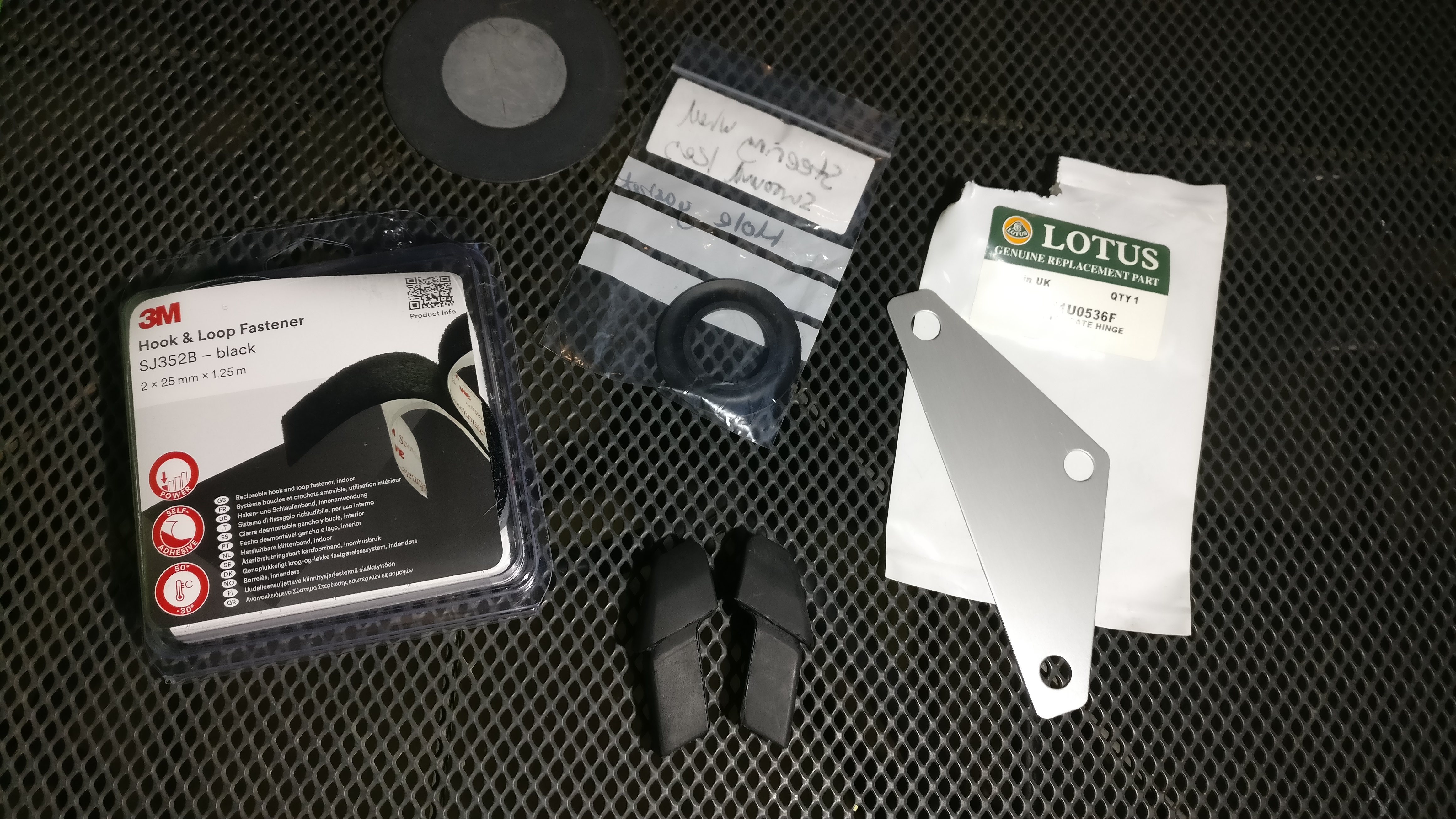 Velcro for fixing the headlight covers to the clam, I want to have them so I can easily take them off and clean inside. I plan to have the velcro down the sides and have thin weather seals on the top and bottom. Fingers crossed it works, if not I'll just use the binding putty again. New window cheater seals thanks to Paul Matty Sportscars. Finisher rubber for the steering wheel surround by the ignition. A shim for the tailgate hinge. 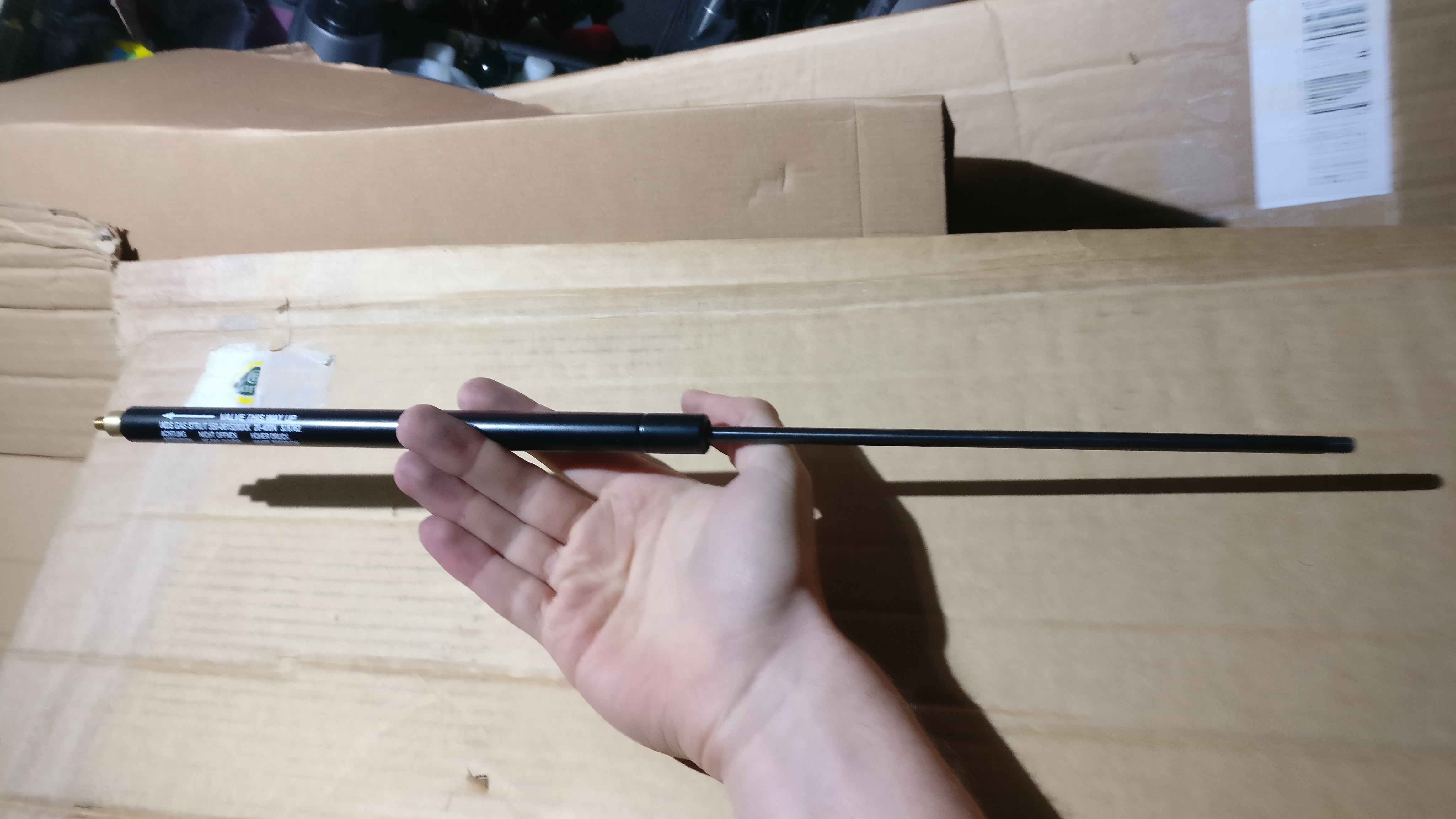 I was inspired by a previous thread on Exiges.com about fitting some adjustable gas struts to the tailgate to hold it open. These will be one of the last things to go on but definitely will be handy so I don't have to carry a special stick all the time
Top

Time to get onto the disassembly. If people want me to put up pictures of taking everything apart I can, but I think most of you know how to take these cars apart and they're relatively straight forward. However if you would like to see everything (or as much as I took pictures of) then I'll add the disassembly pictures too, but most were taken so I had a reference of how to out stuff back. 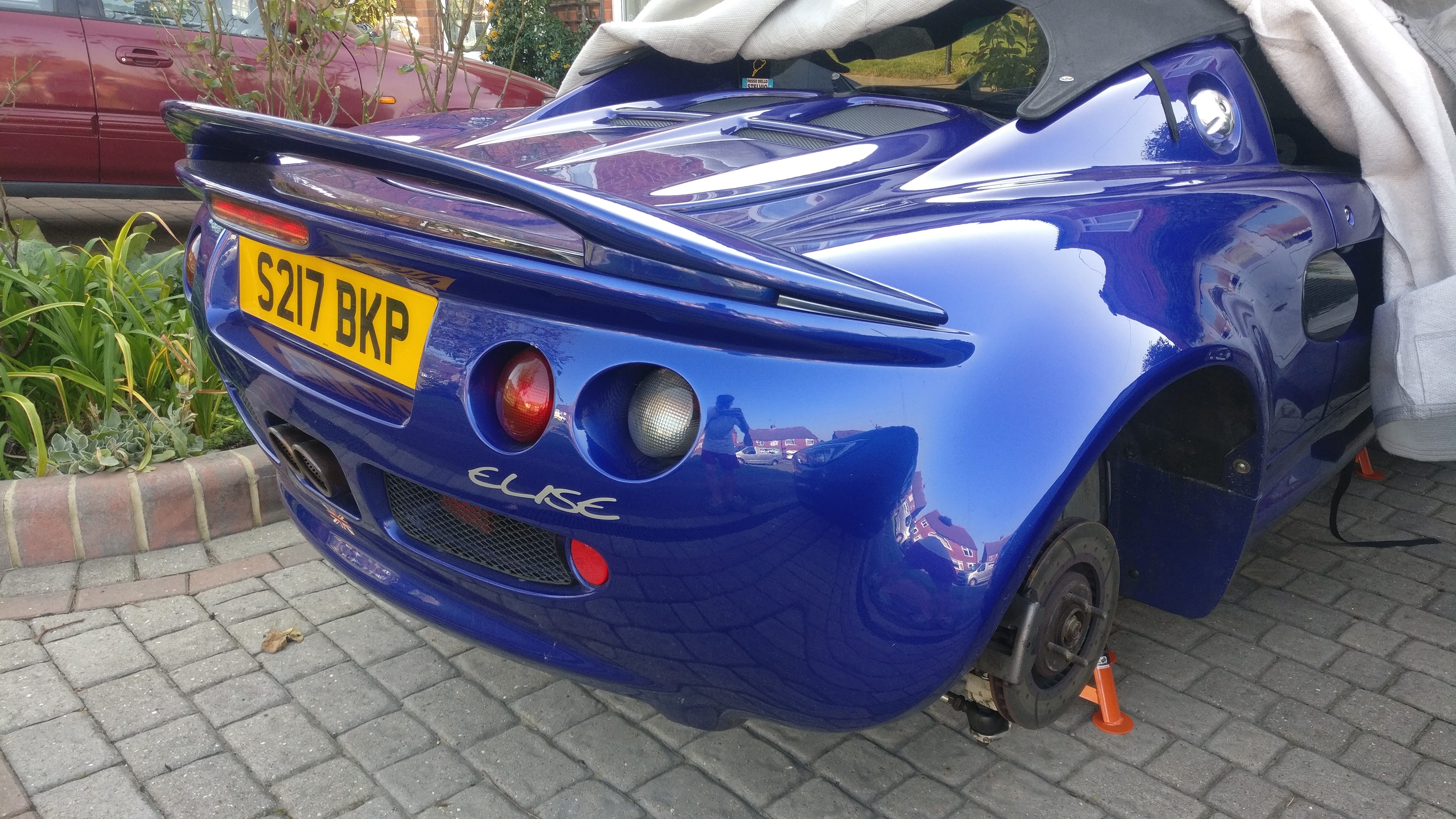 Up on stands ready to go
Top

First bits to remove were the undertray and diffuser. I did this actually before getting it on the axel stands as the undertray covers the brace where the rear stands had to go.

Next the wheel arches came off and stored. I'm going to try and reuse them for the Exige, no idea if it'll work but worth a go.

Both front and rear clams have been off regularly in the cars life, but not by me. I was confident nothing would be seized, so I tackled the front clam first. 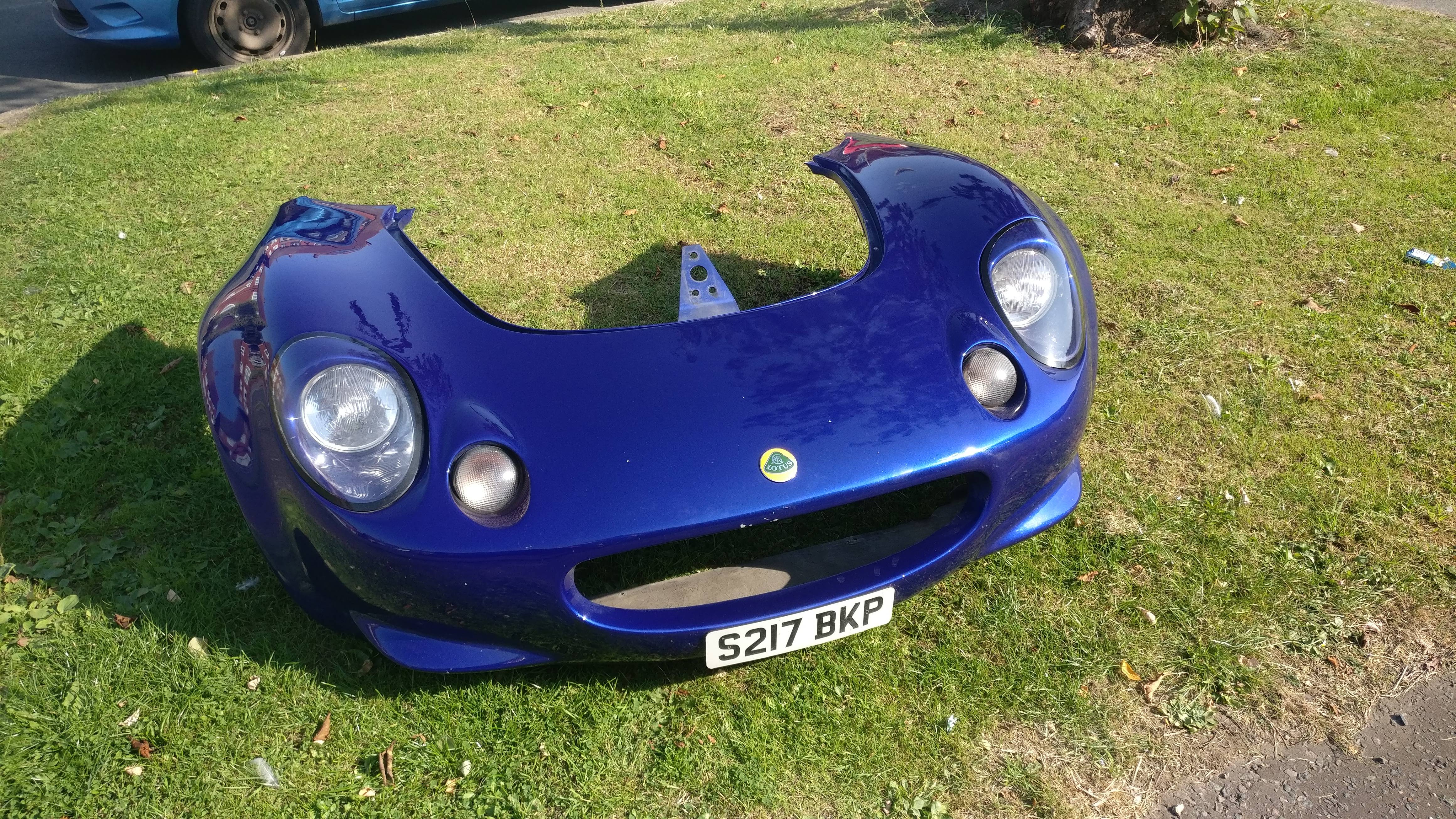 I took the front grille out and off came the bonnet. I kept the headlights and indicators on the clam as they're much easier to remove once the clam is off.
Off came the nose badge, headlights and indicators.
Headlight covers are being kept and put into the Exige, but of heat from a hair dryer and they peeled right off. It was easy to clean them up but a little time consuming. 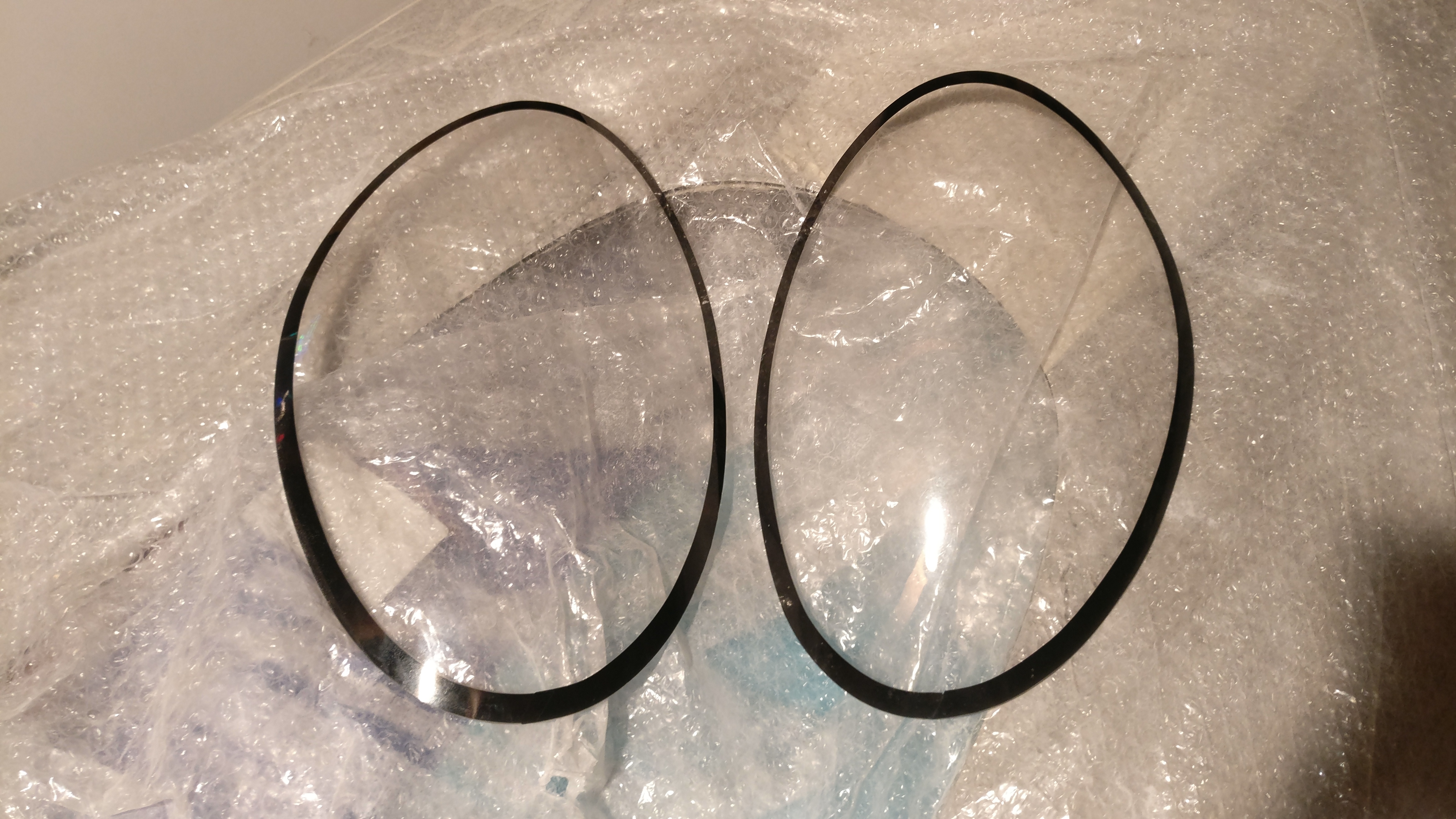 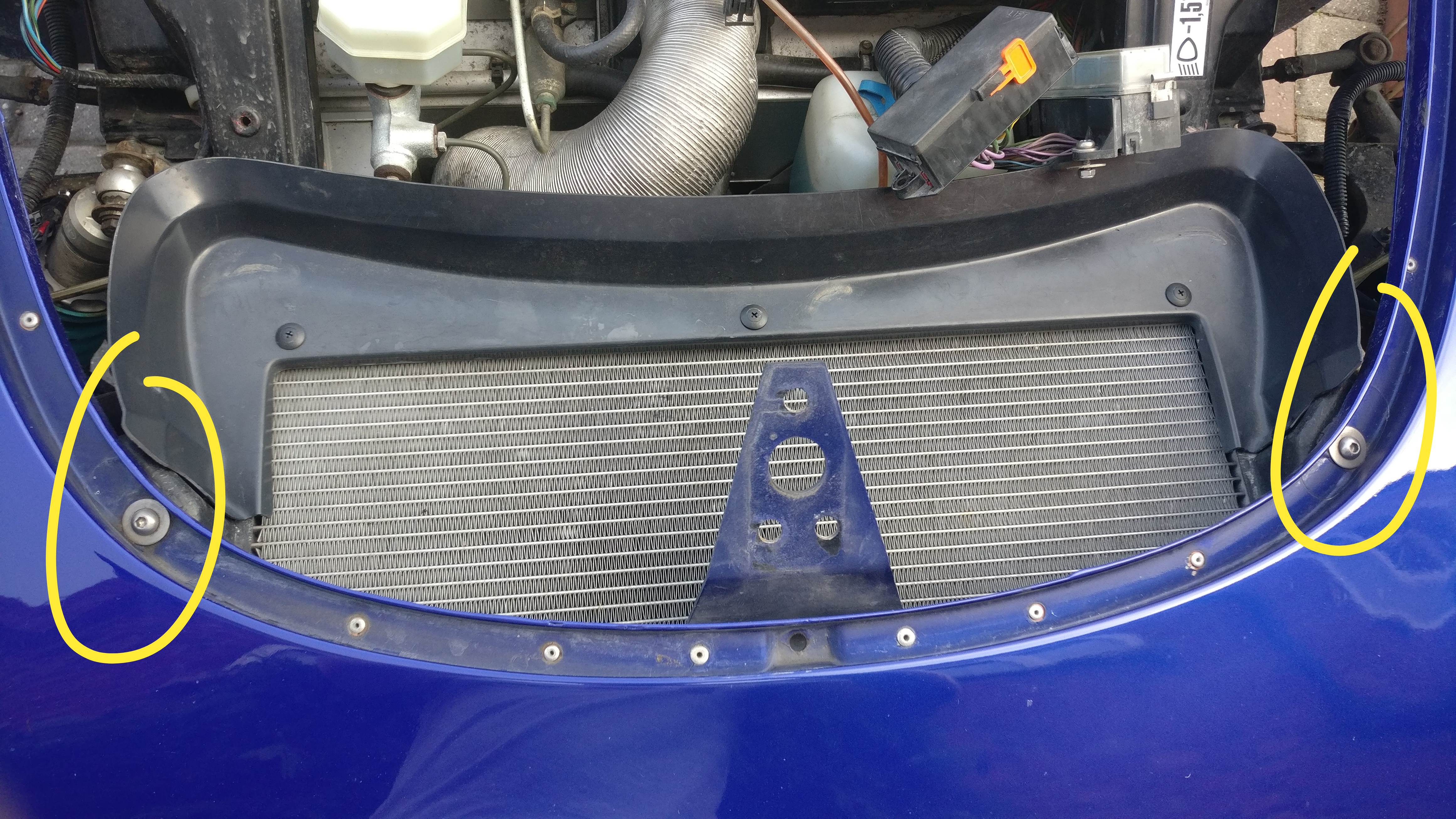 Thankfully all the bolts are stainless so nothing stuck at all.
Also to reuse the hinge I had to drill out the rivets. 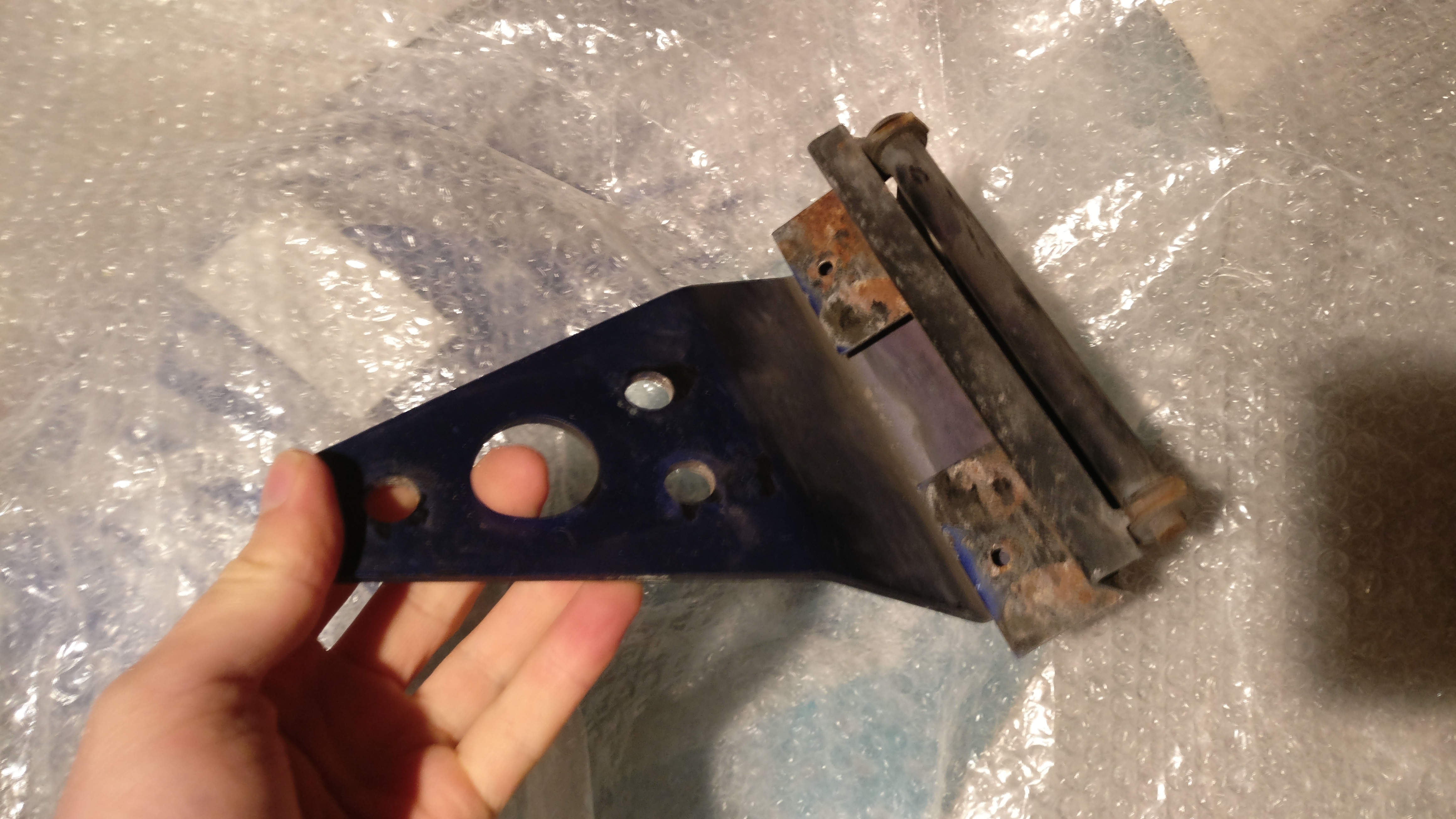 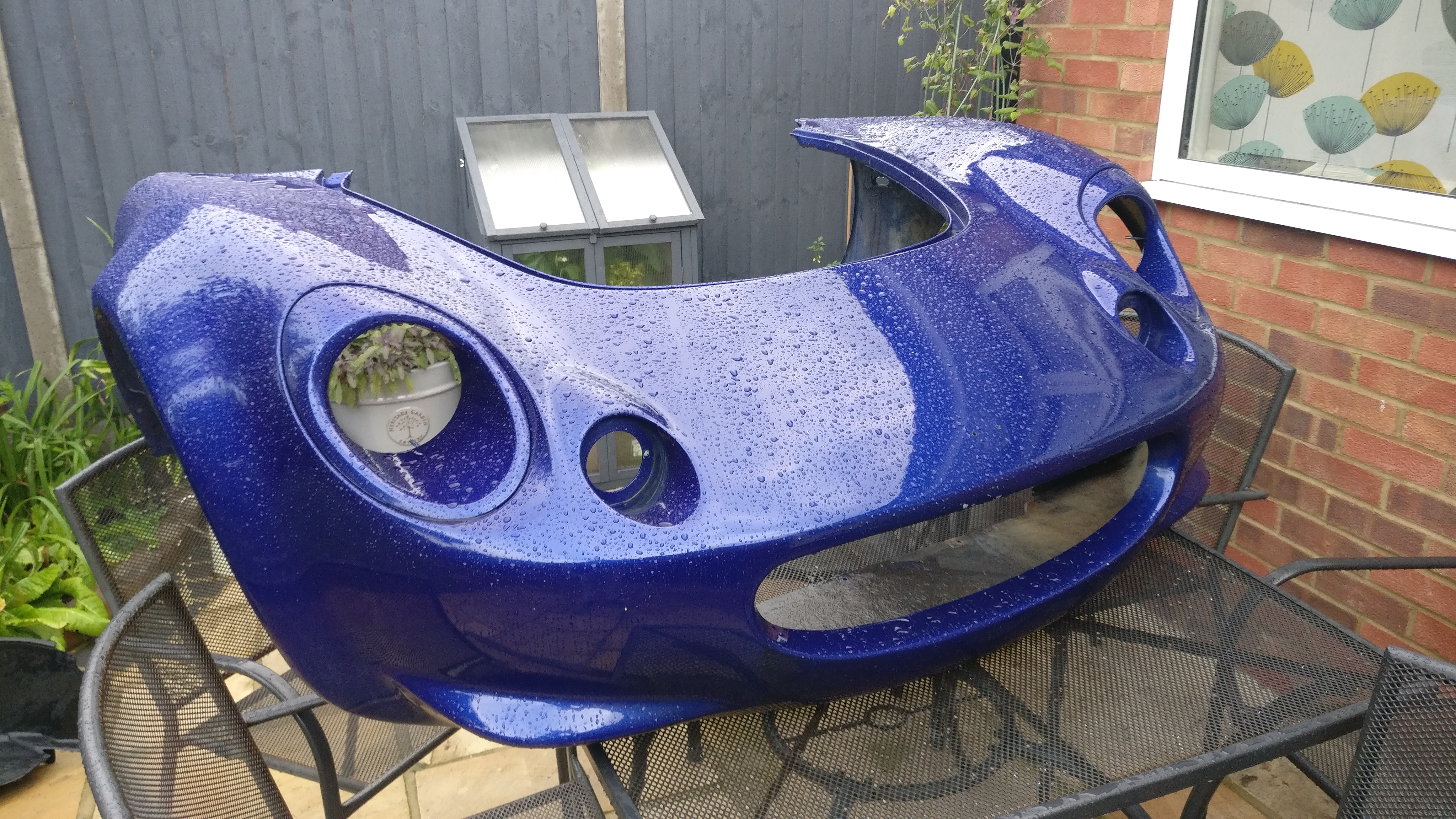 I made a note of where the plastic loom tabs were to replicate them on the Exige clam. 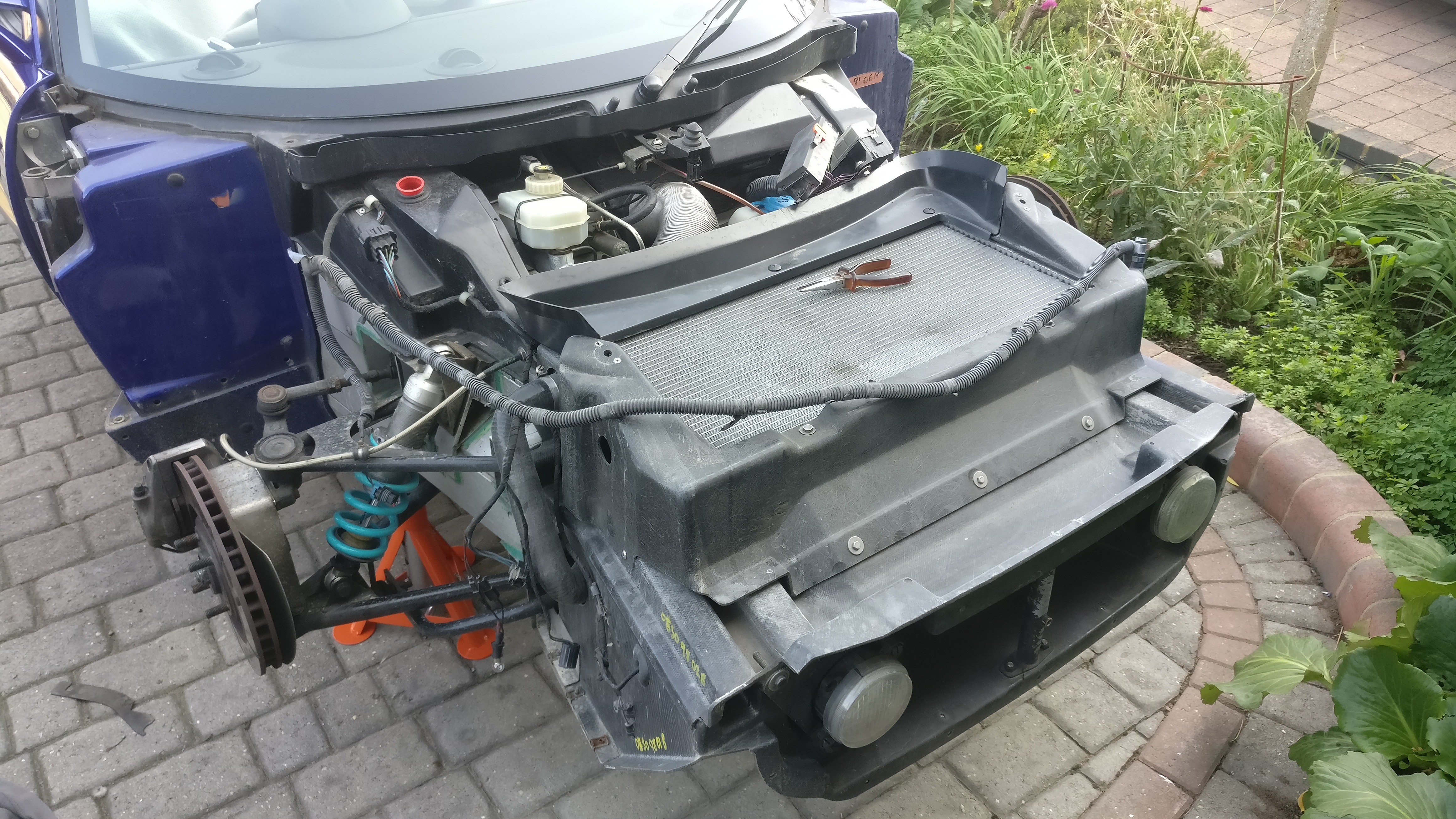 With the clam off I could then tackle the seized override fan. But I would take the rear clam off first.
Last edited by jamesjeffery on Thu Nov 19, 2020 10:42 pm, edited 1 time in total.
Top

My car is the lightweight version and has the aluminium sheer panels. Being an Elise they fix into the sides of the longerons rather than the top like the Exige ones. I'm going to make my own "hybrid" versions that fix to the side of the Elise longerons, but are profiled to the Exige clam. I have made a template up but this will feature later. 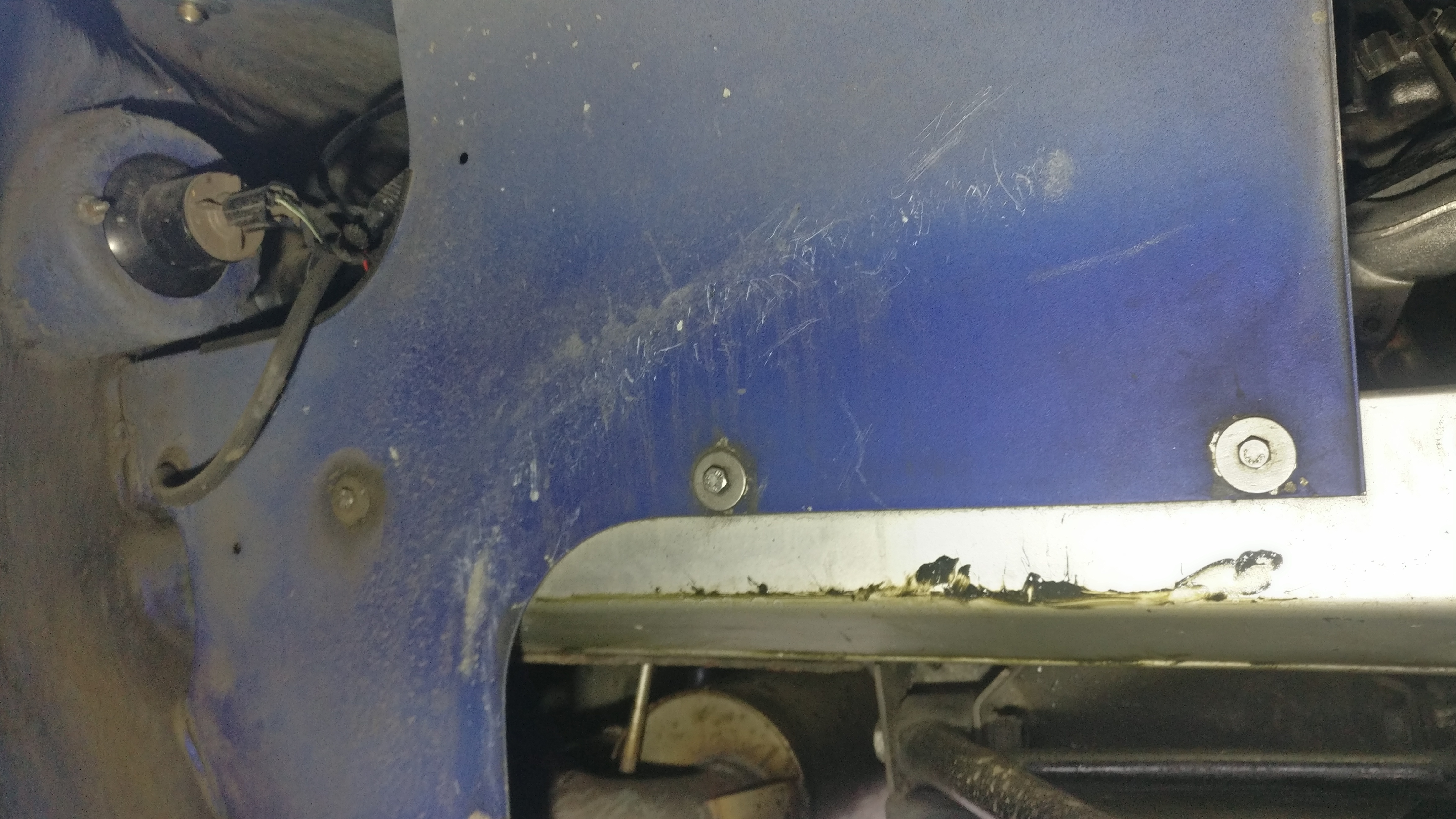 I would make the sheer panel template (half of it at least as the Exige clam is longer) when the rear clam was off the car.

Onto the rear clam removal, I took off the bootlid and disconnected the aerial, the connection was hidden in the small corroidated metal piping. Out came the rear window, sheer panel bolts, the loom was disconnected to the ECU and carefully extracted, the fuel filler neck screws were removed and the aluminum bulkhead was laid flat in the boot.

The only frustrating bolts to get out were the B pillar bolts. They came out easy enough, but it is a bit of a hassle to take out the seats (which involved taking off my Willans harnesses as well as my normal seat belts) and disconnecting and removing the speakers. I think when I finalise my rear clam fixings for the Exige I won't bother with the B pillar bolts. It will still have 7 other bolts as well as the 4 roof bolts and the brackets and bolts so I believe missing these 2 out of 15 won't be a big deal. 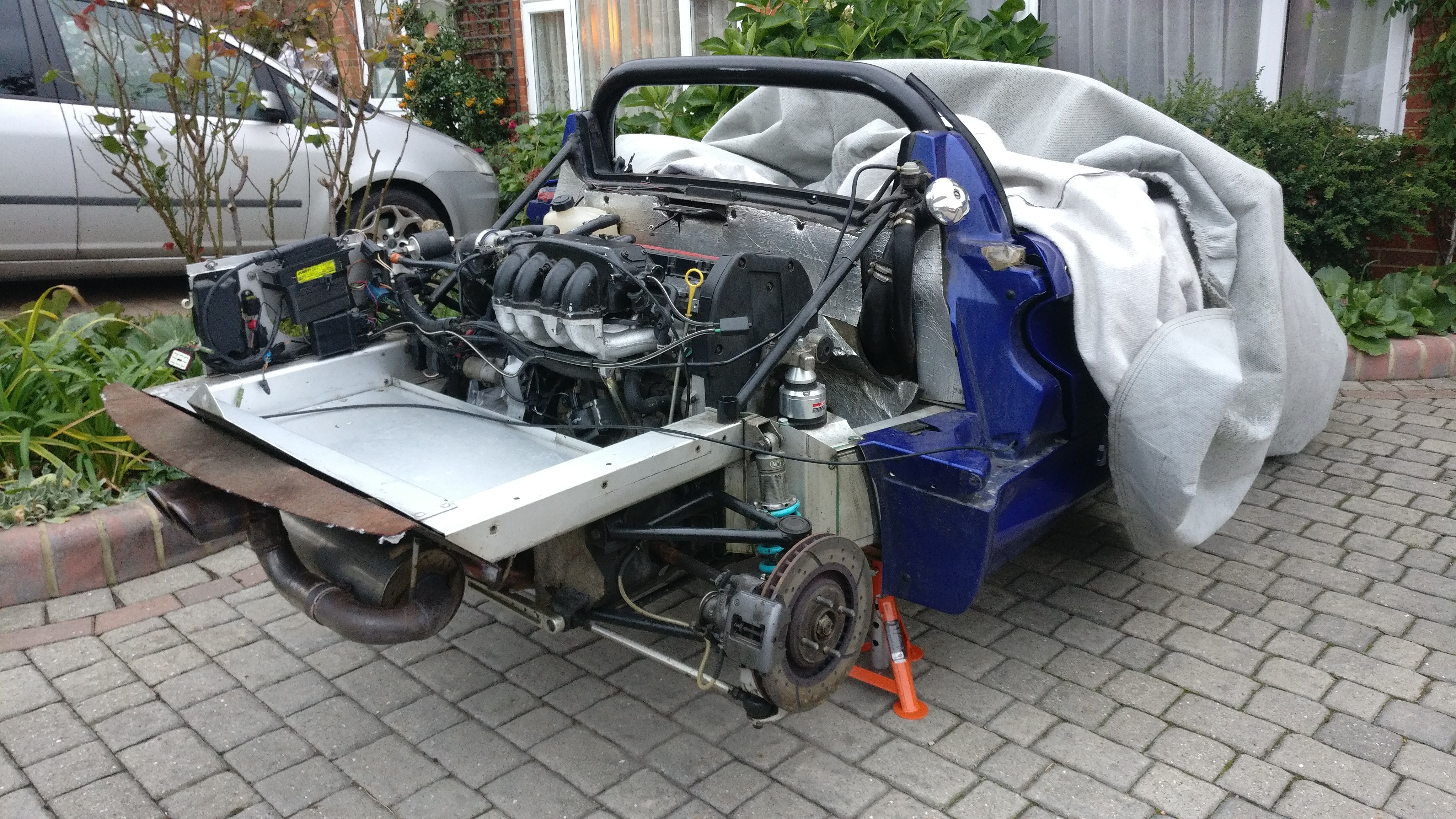 It was a bit of a job to remove the clam on my own, especially on a pretty windy and rainy day, but I managed it without damaging anything. 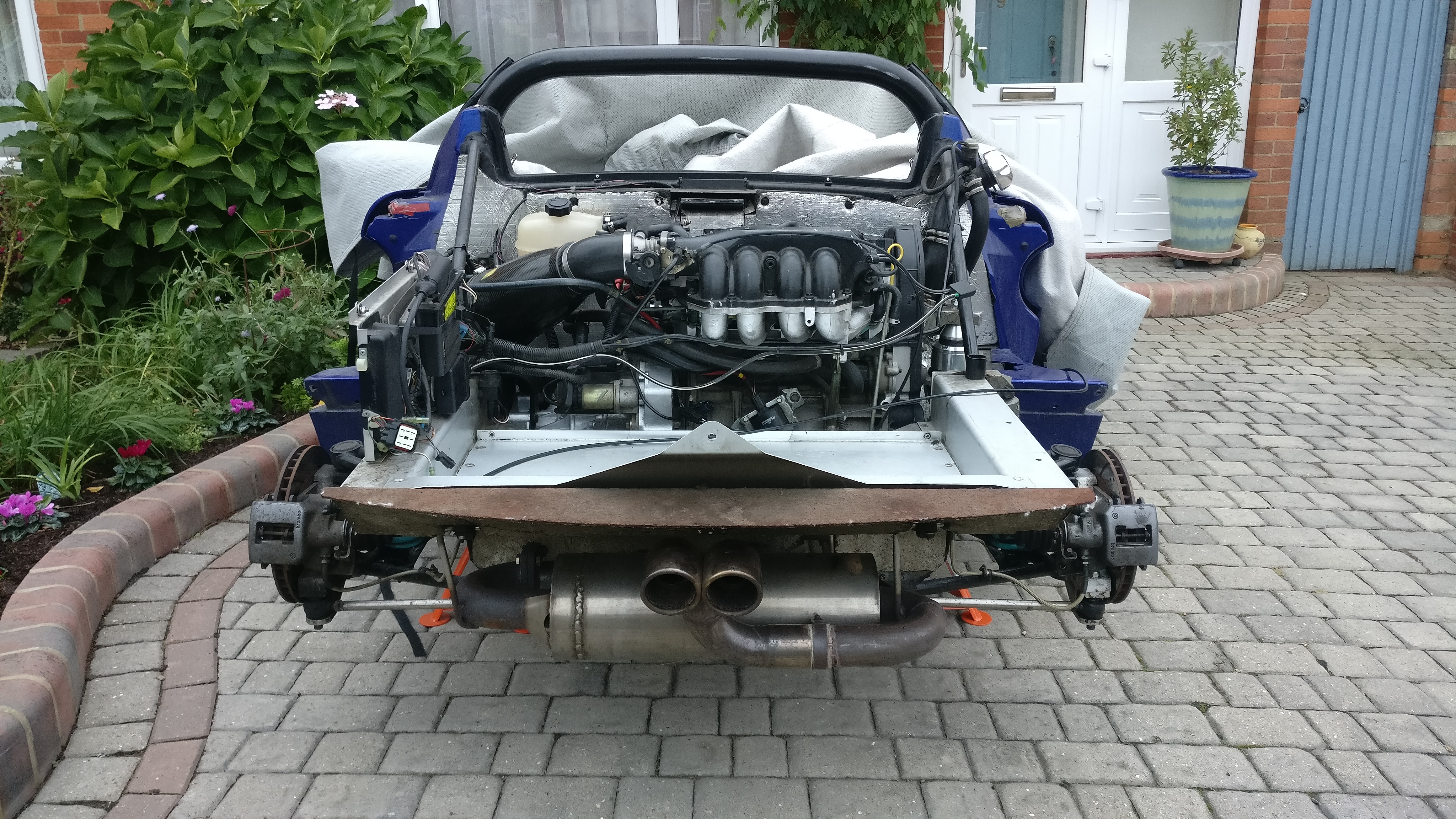 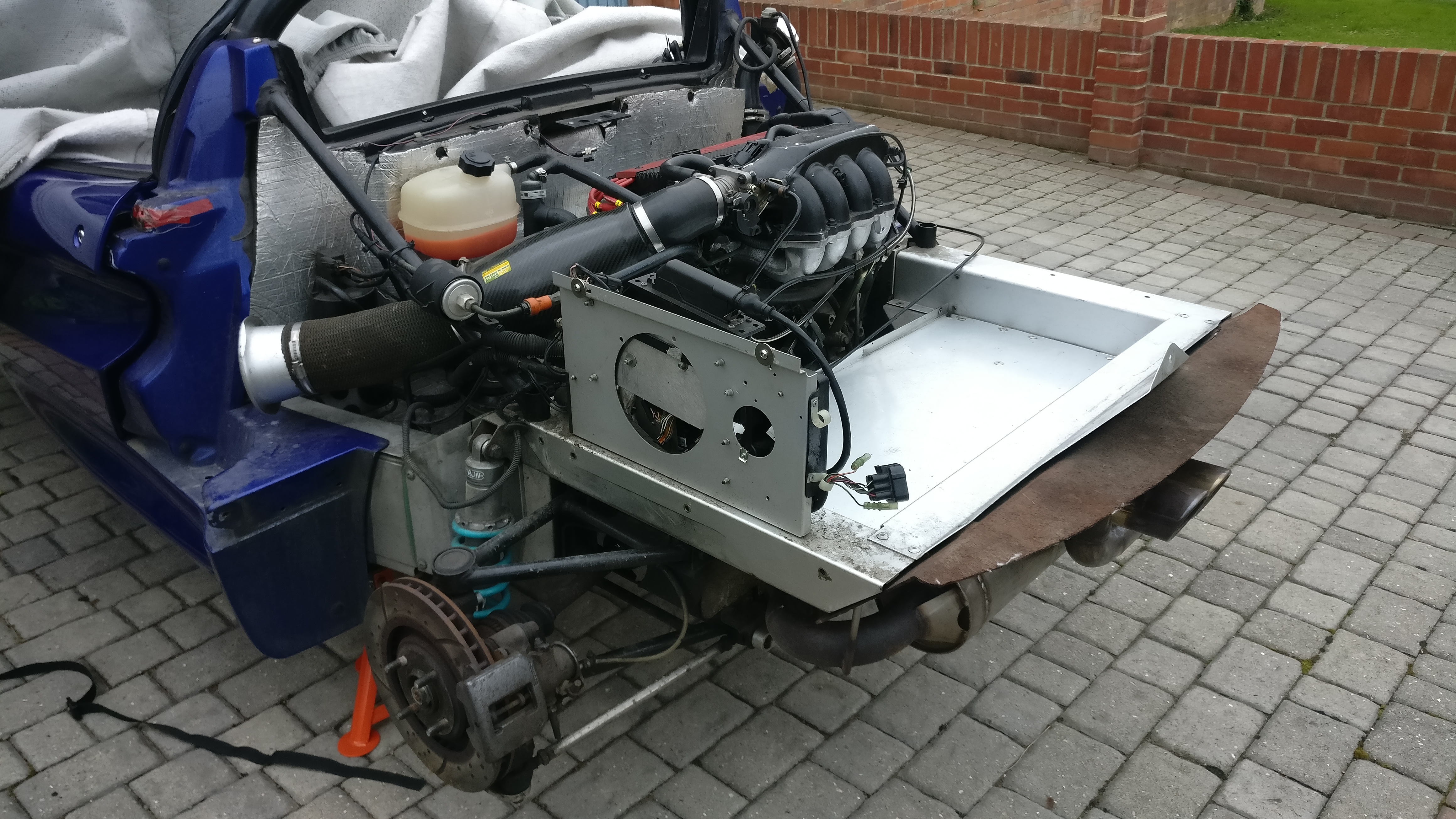