Elise111S wrote:This is good Dris, I'll be doing this with mine soon. I'd like to make Anglesey too!

Just a gentle reminder there is a little under 11 weeks to Anglesey! Time slips away quickly.
Top

Original Konis?
Just like mine.
Maybe it's time for me to "refresh"
Top

I did consider Benja's kit but havered for too long.
Top

Nitron Track Day Pros transformed my S1 - but I did get JDS to fit them!

Dave - not seen the website before, but I do like it. Will be working up in Hull for a few days in March so may well pop in.

MarkPH wrote:Nitron Track Day Pros transformed my S1 - but I did get JDS to fit them!

Dave - not seen the website before, but I do like it. Will be working up in Hull for a few days in March so may well pop in.

Would be great to see you...
Really must get the workshop and stores finished/painted and organised then have an open day one Saturday....
Top

Taking onboard the advice (cheers Dave-JDC) I decided to remove the wheel arch liner and hopefully save some skin/swearing in the meantime.
I needed to first remove the 2 bolts and 2 screws (1 screw hidden in photo) holding the fuse box assembly: 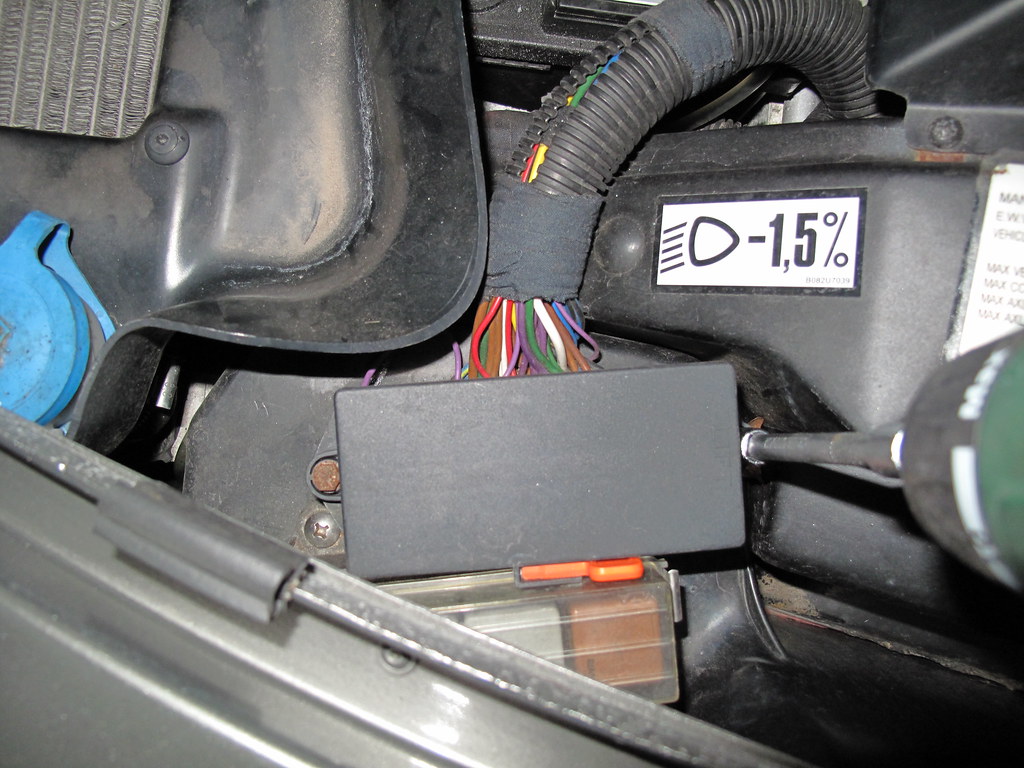 Then the 2 bolts holding the forward side: 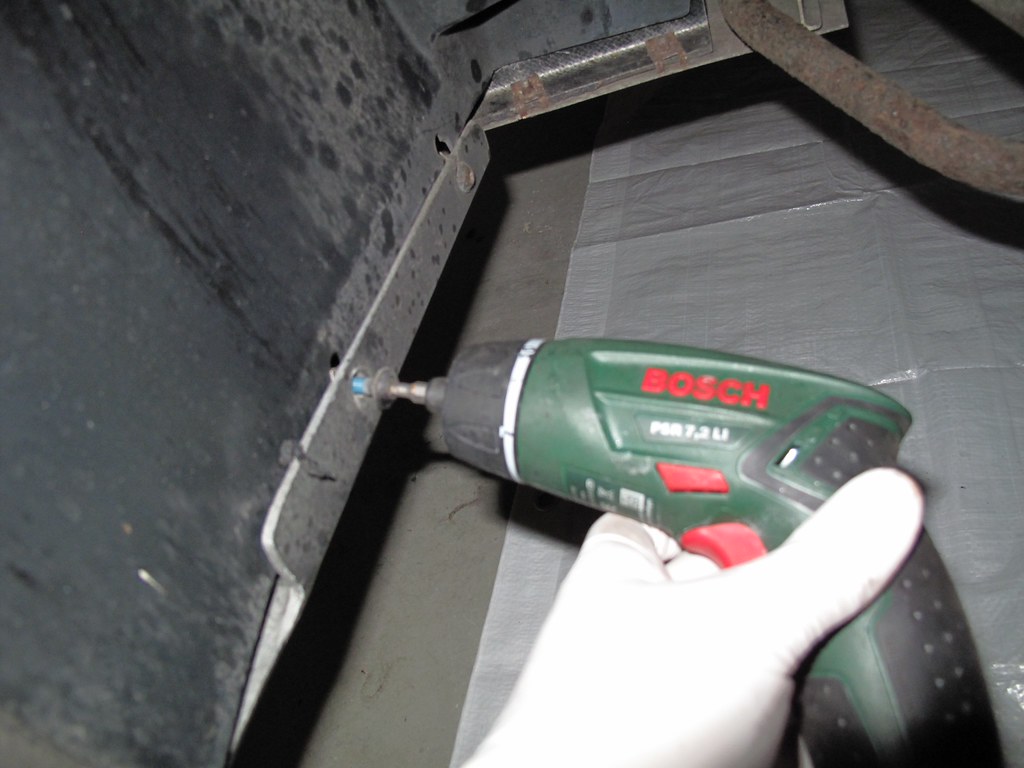 ...and the 3 plastic screws/washers to the rear. These where quite difficult to get out but using a flat headed screwdriver combined with a Philips type screwdriver and pliers managed to get them out 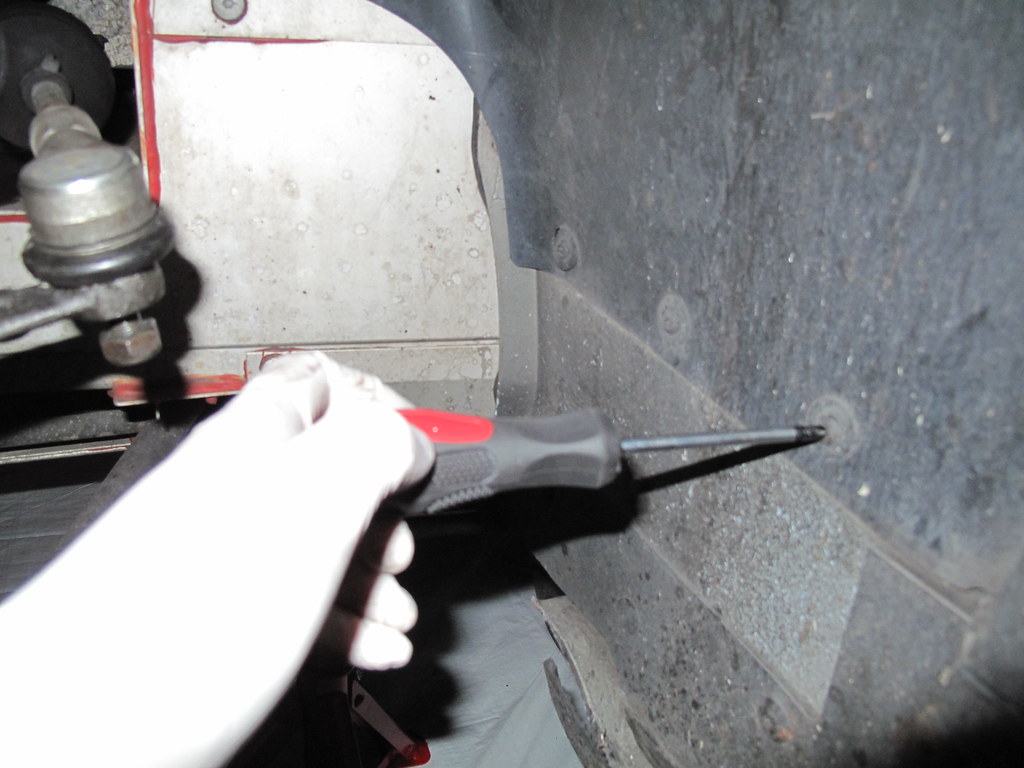 Then I could peel back the wheel liner allowing better access to the upper wishbone bolt which I will remove later on. 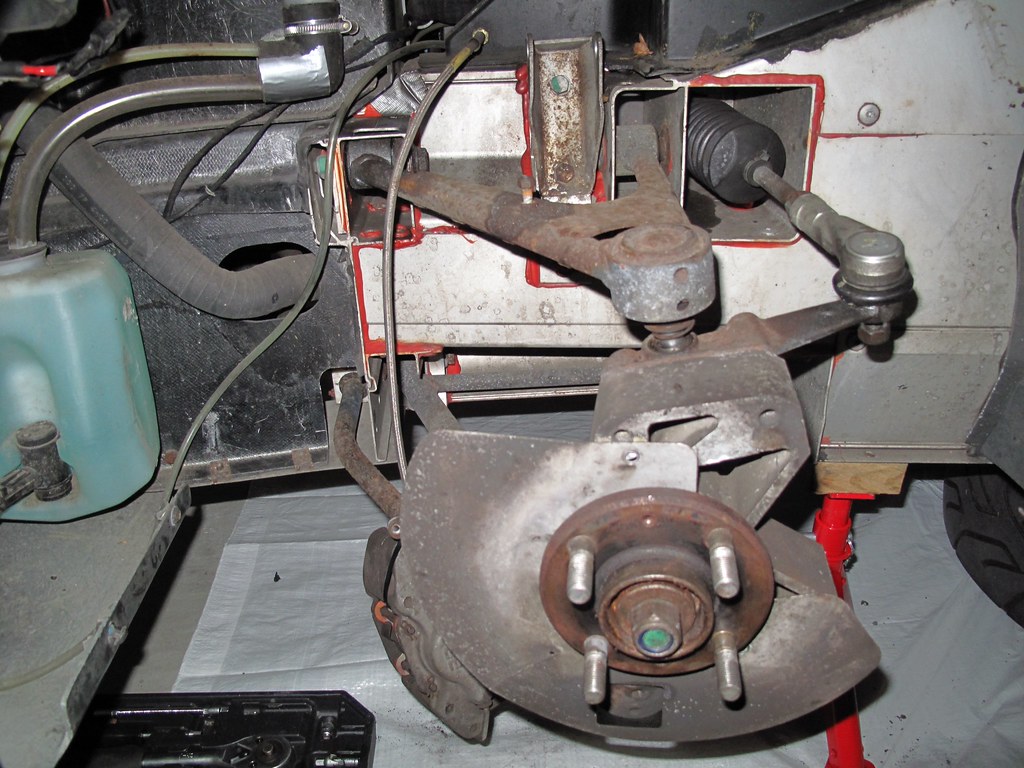 To remove the shock absorber bracket was fairly straight forward (I’m removing to clean everything) using a 13mm spanner and socket. 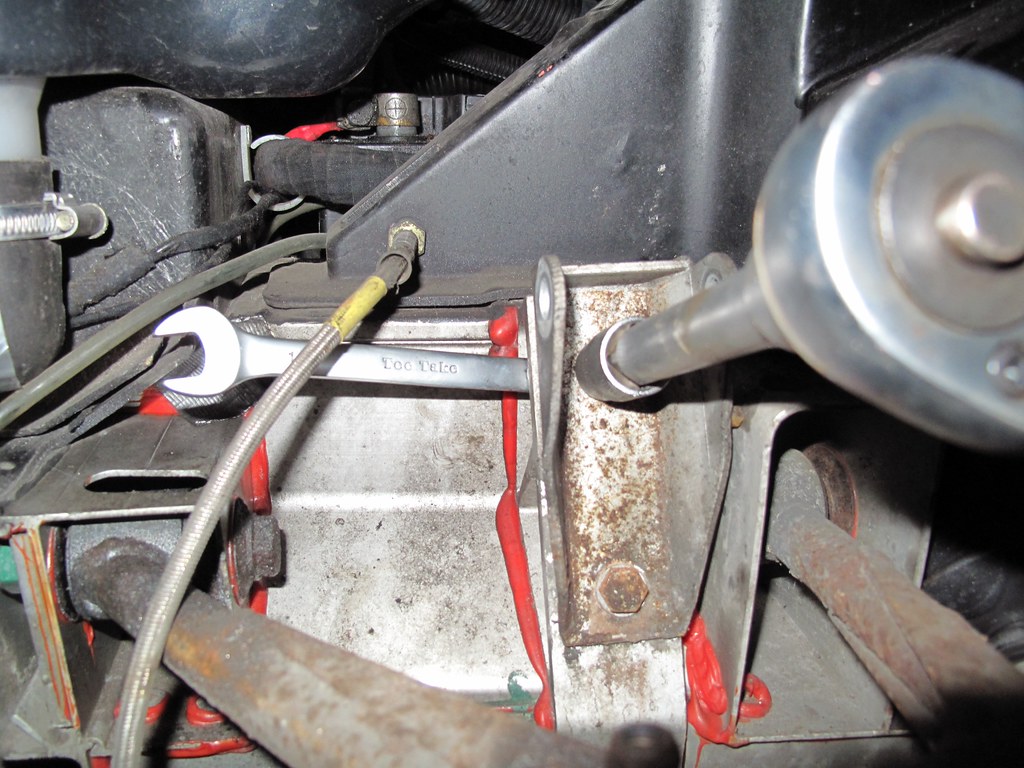 Now i carried on with the hub dis-assembly...
Next was to remove the brake disc shield. First removing the 2 visible hex cap head bolts (one top one bottom) 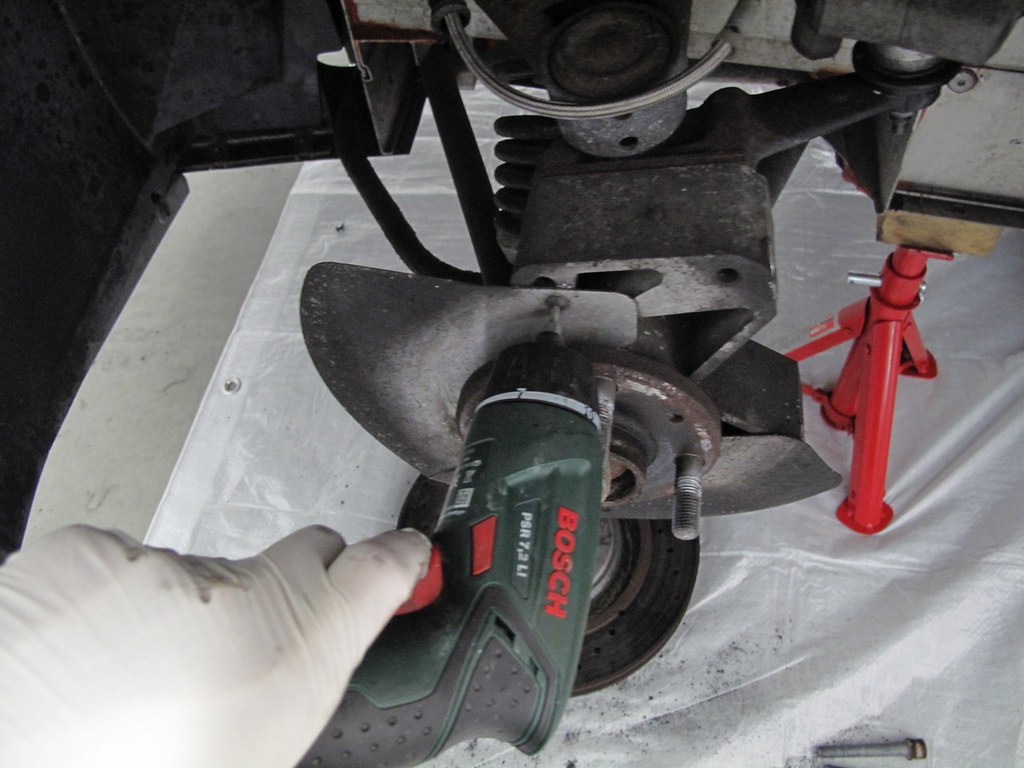 and then the hidden bolt, which just needed to be loosened before the shield could be worked loose in the direction towards the front of the car. 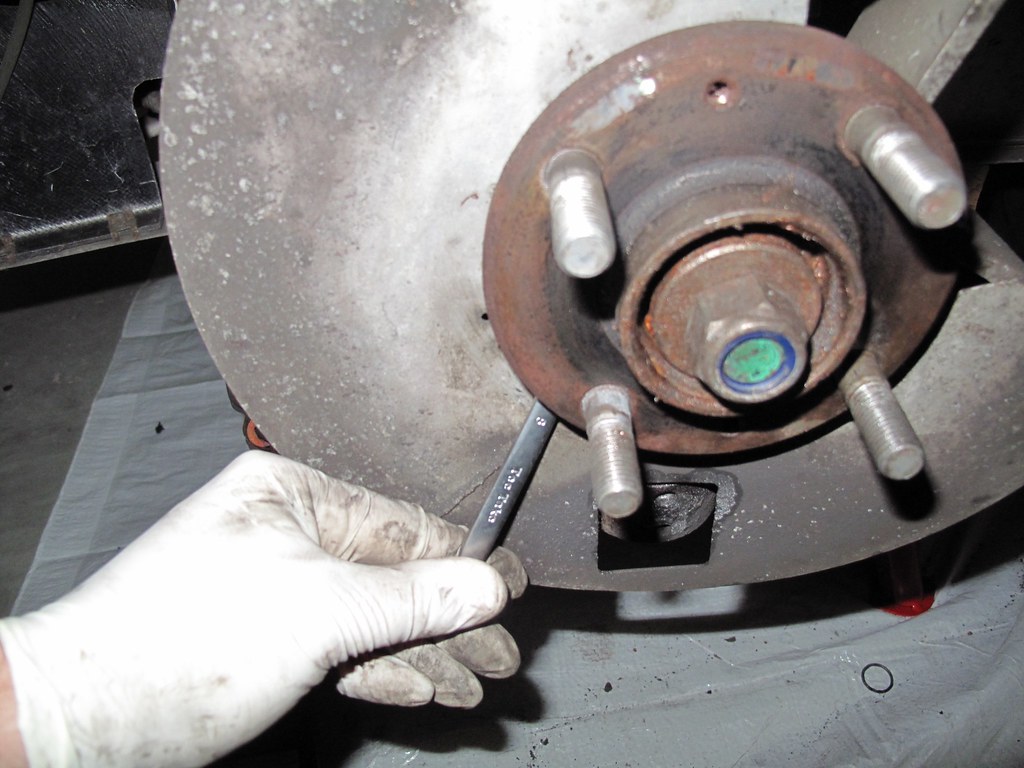 The 4 bolts holding the plinth to the aluminum upright where loosened but the 2 at the forward end couldn’t be removed. 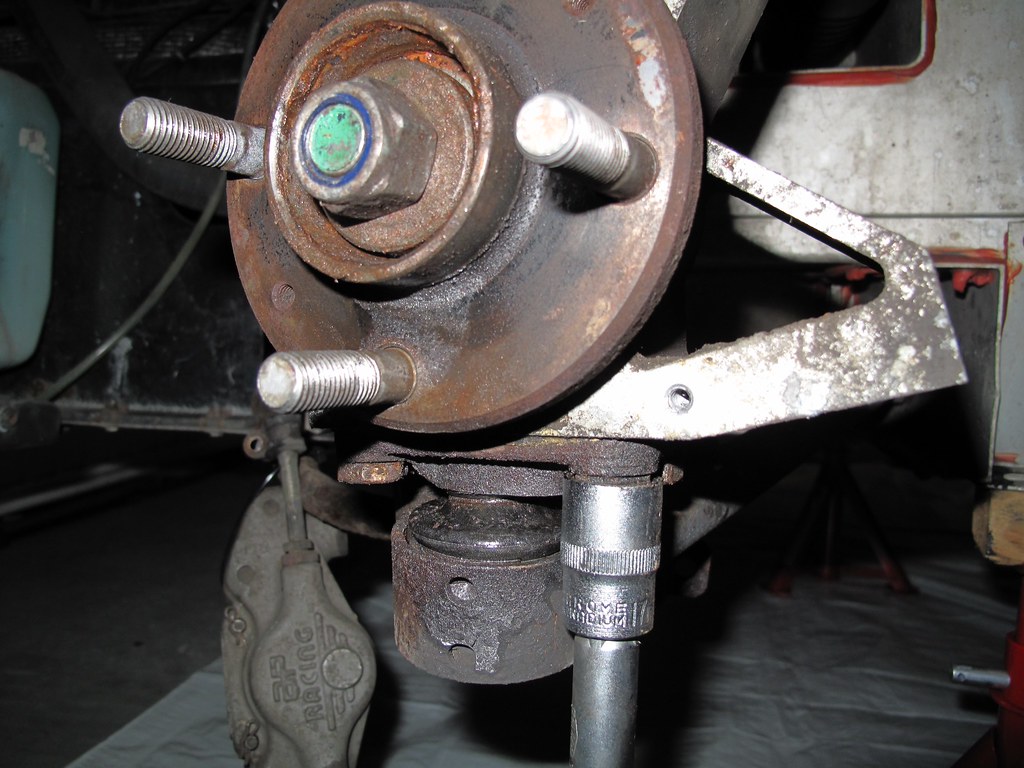 With the top and bottom wishbone joint nuts now loose I used the ball joint splitter to pop the top joint out. 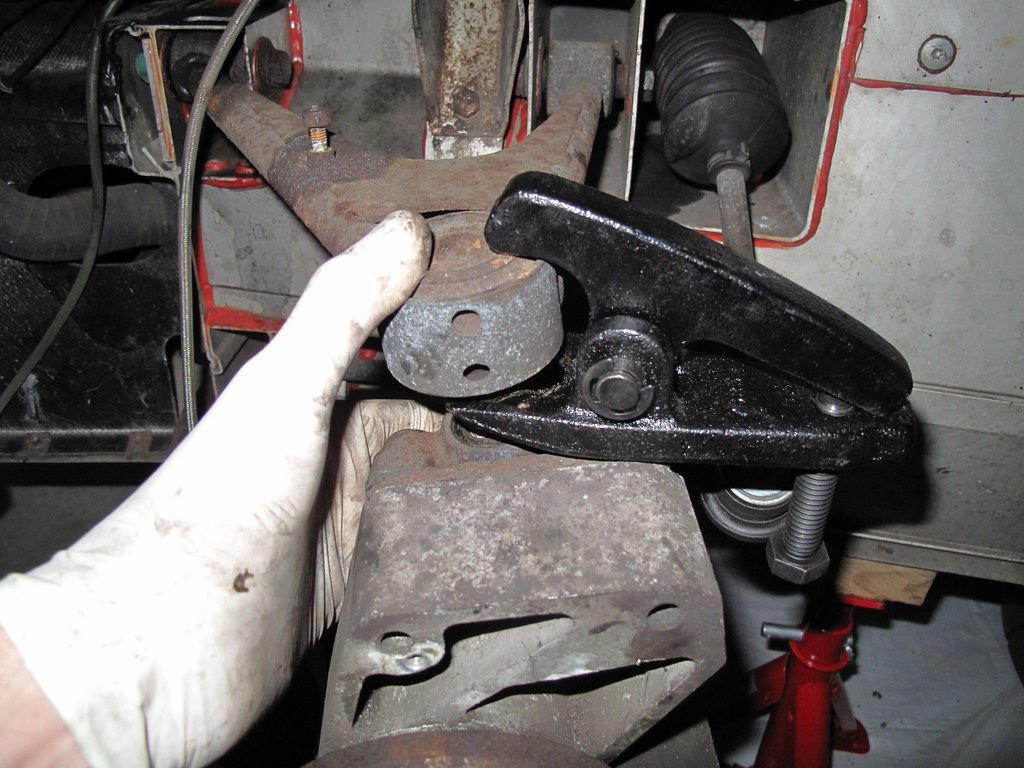 ....and then slide out the hub/upright (removing the tie rod end nut beforehand) leaving the plinth to be removed by using the ball joint splitter 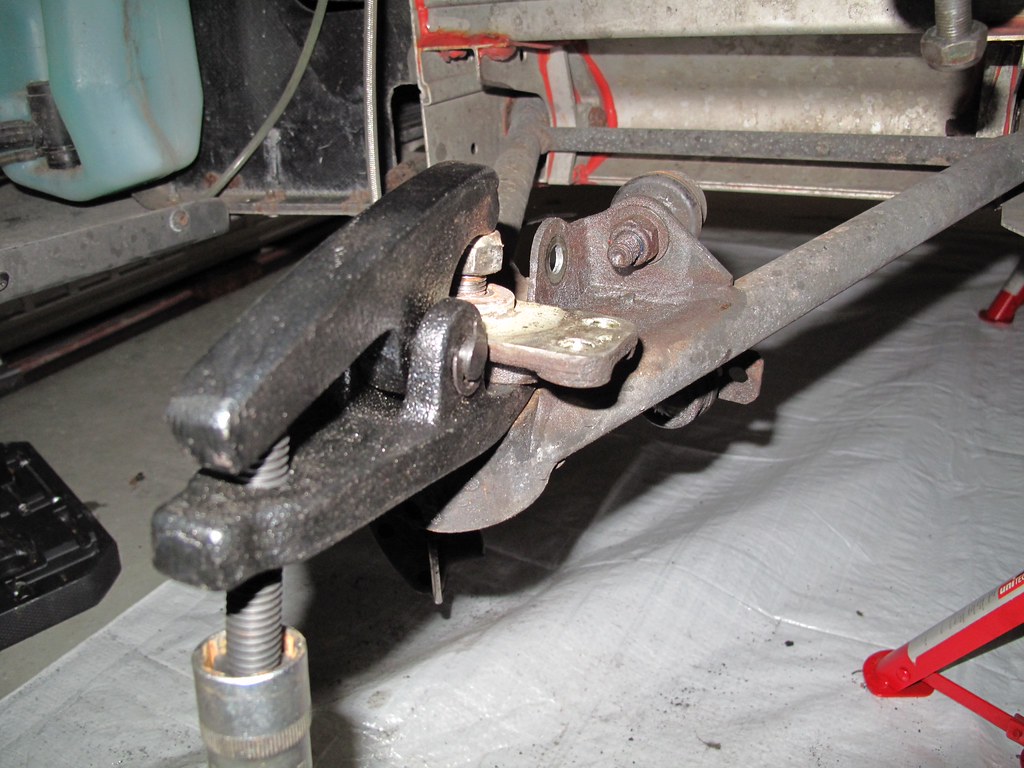 Then with the 8mm hex Allen socket removed the steering arm from the hub (this could have been done much earlier)
Here you can see the 3 camber shims. 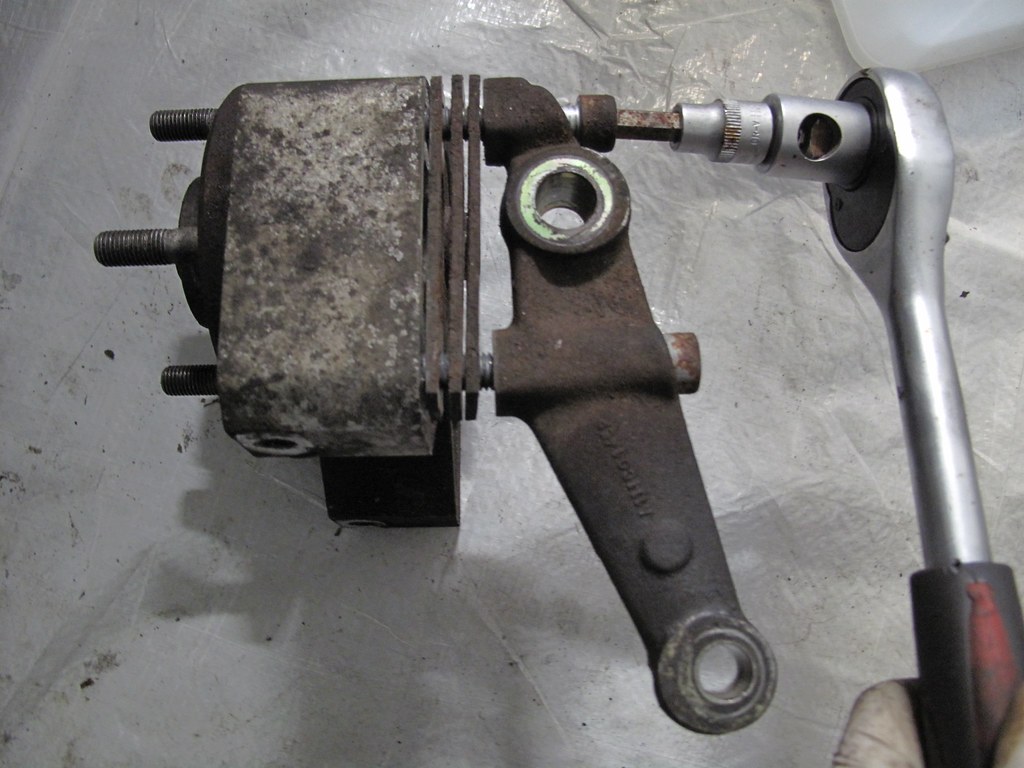 Now back to that drop link (cheers again Dave-JDC)
Using a 19mm spanner on the flat part of the drop link and a 17mm spanner I was able to release the nut without the need to cut or use a nut buster. 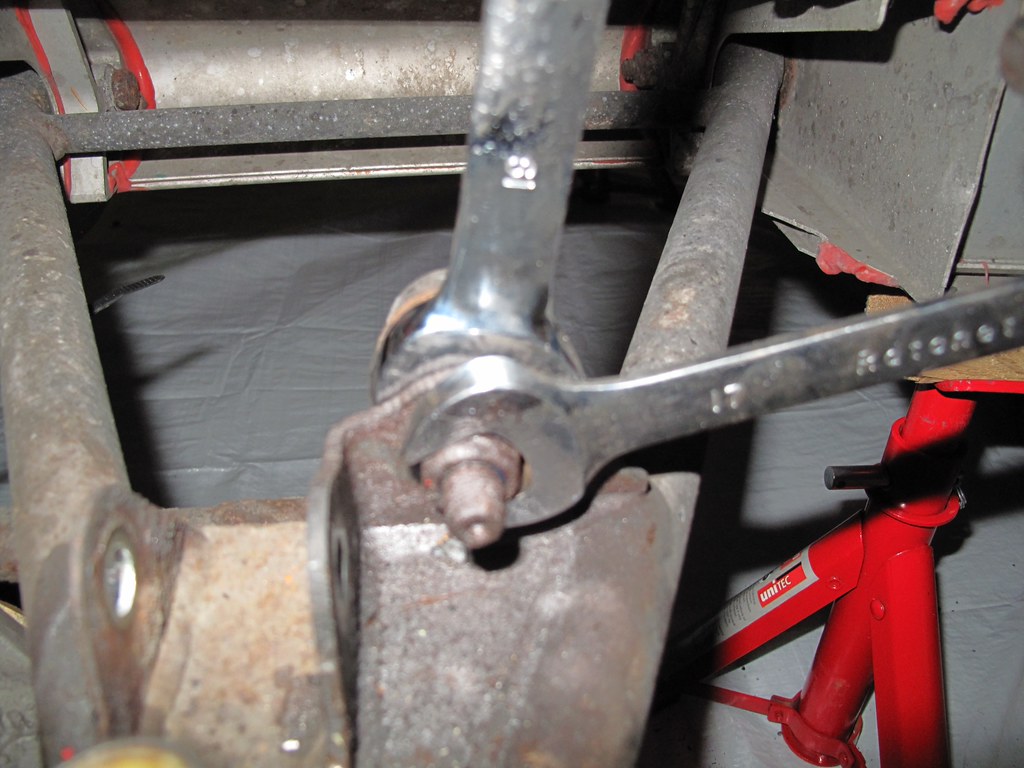 The wishbones are the last to be removed but for now I was done. 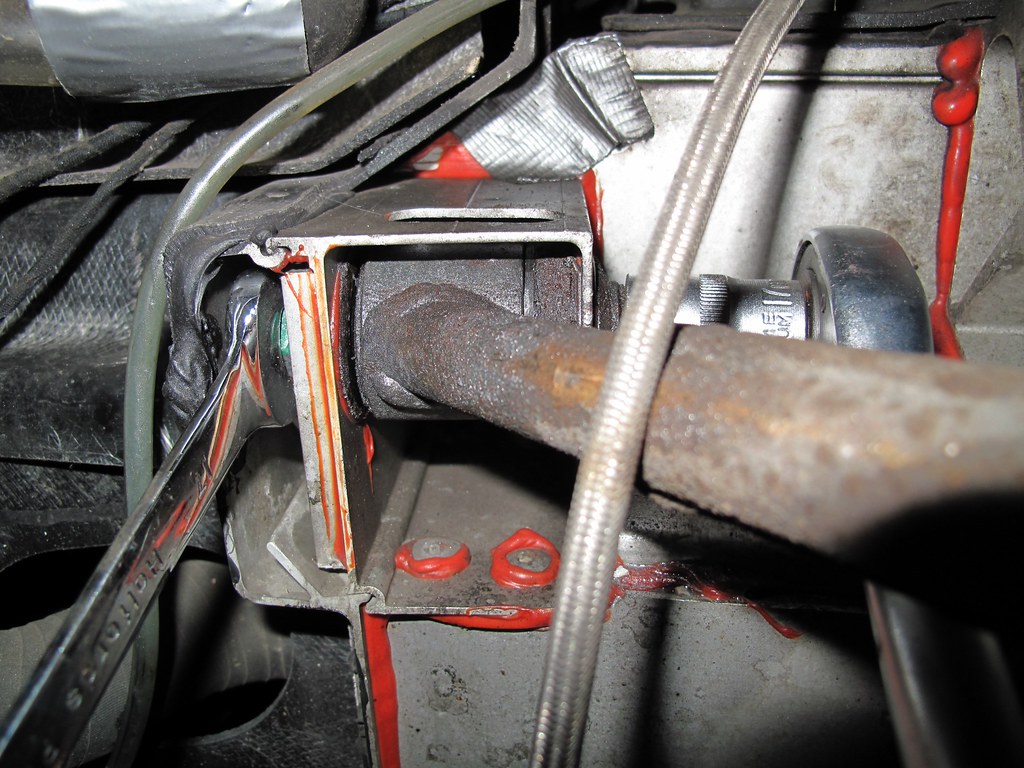 To remove the upper rear bolt proved quite tricky as with the steering on full right lock I still wasn’t able to get the bolt out without fear of damaging the cover.
First I loosened off the joint using 2 x 17mm spanners as getting a socket on the forward end proved impossible (the support for the damper bracket being in the way)
Then I decided to cut the tie clip (I can replace a tie clip but would be annoyed to damage the boot)
.....and push it back for enough space to get the bolt out using an Allen key to push the bolt out. 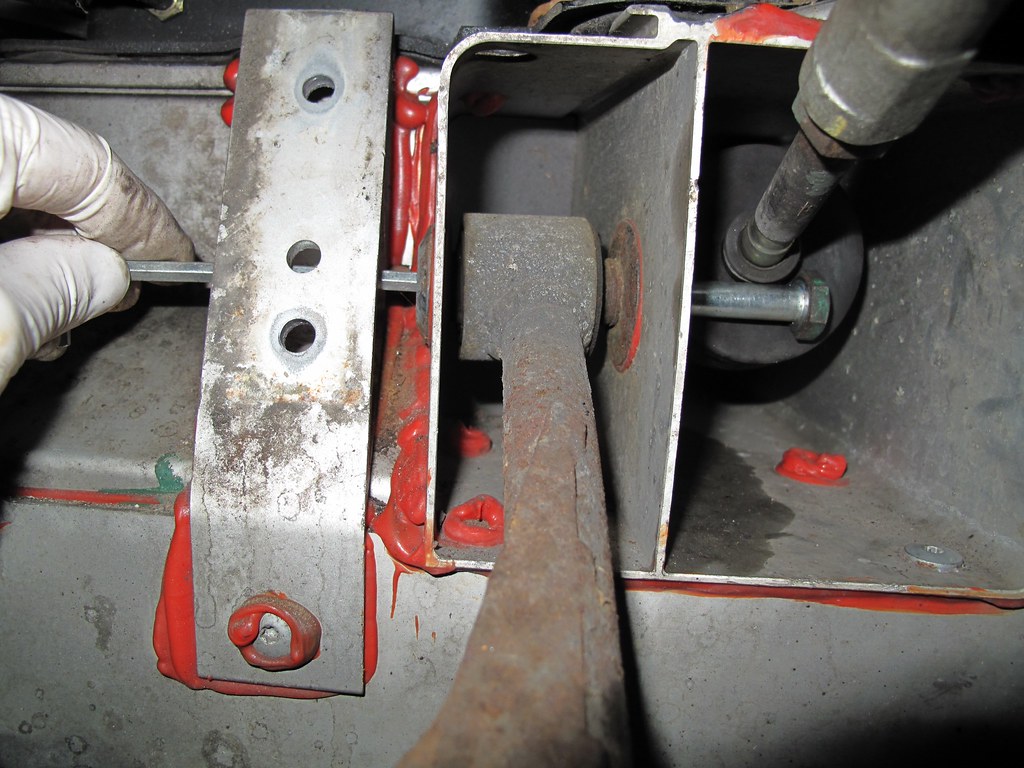 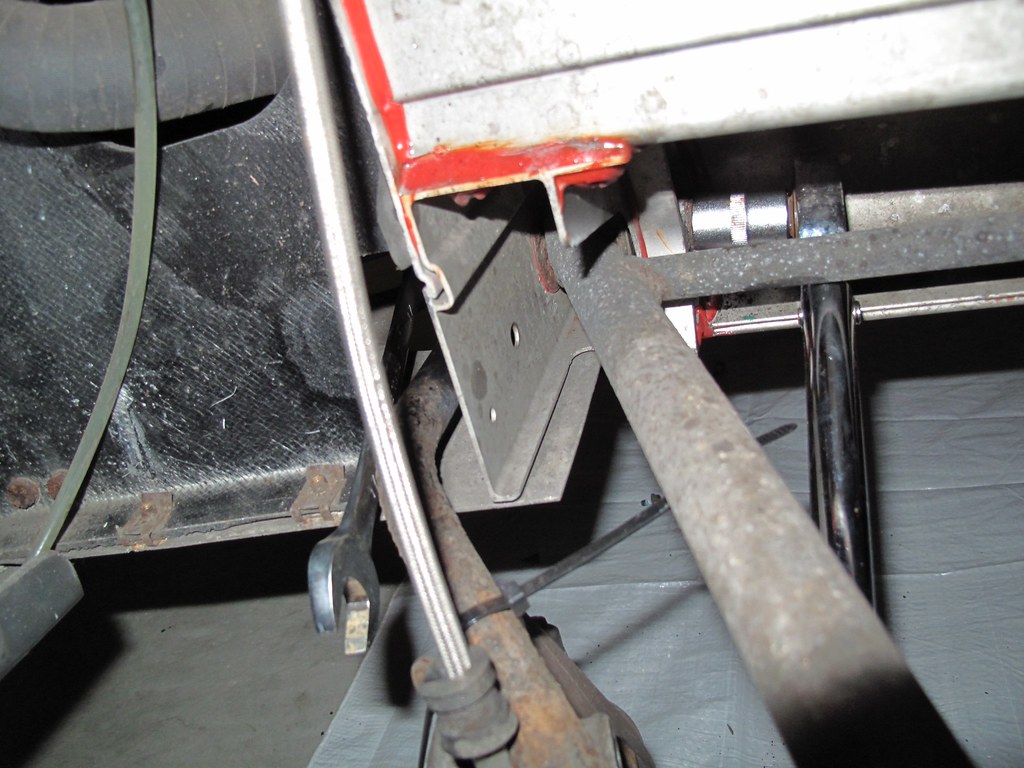 Now for the last joint which involves removing first the passenger foot rest (mine was just Velcro in place) to access the head of the bolt. 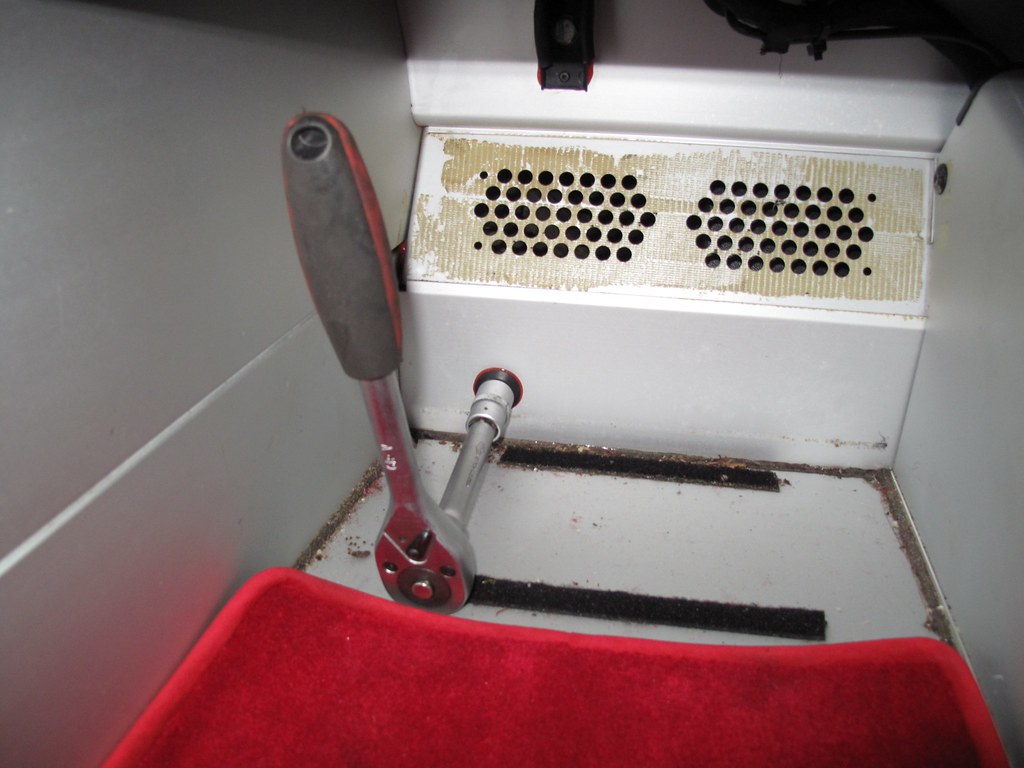 and a 17mm spanner at the other end. I tie clipped the spanner to the wishbone to stop it falling off (sorry no photo)

With the bolts out I worked loose the upper wishbone and was ready to catch the small camber washers.

There’s a gap in the chassis where a screw driver could be used to help work the front joint loose.

This is the upper wishbone with the washers, the 3 large washers (all stuck together) are on the forward joint are all on the aft side with the stubber washer. 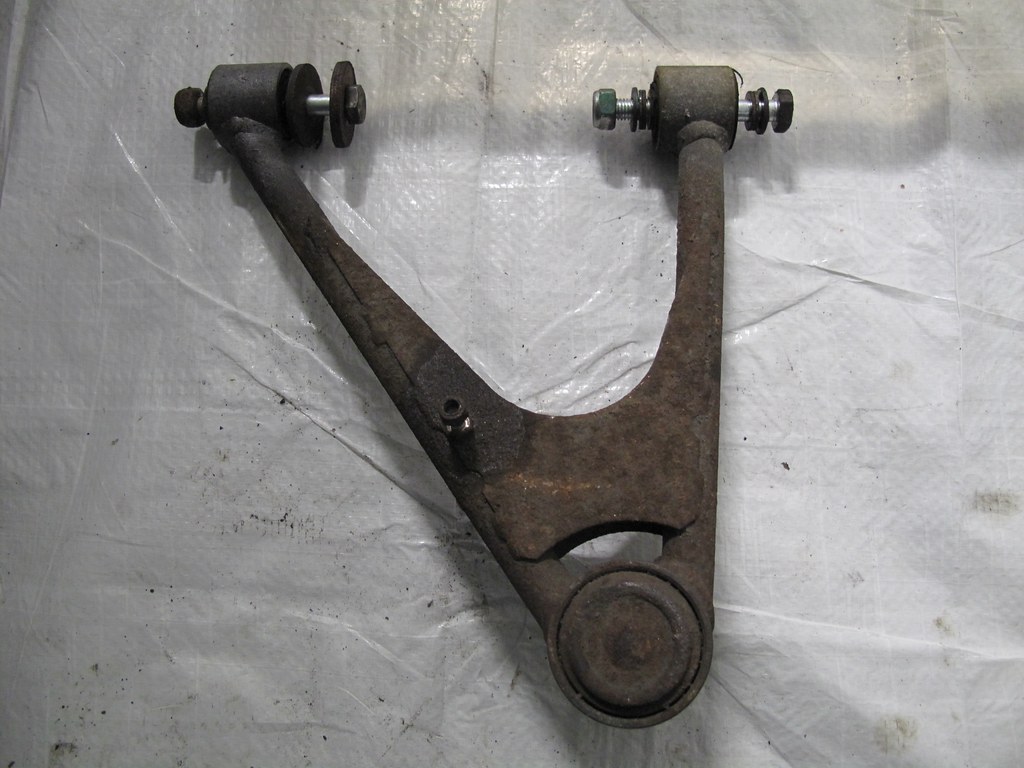 a view of the condition of the bushes 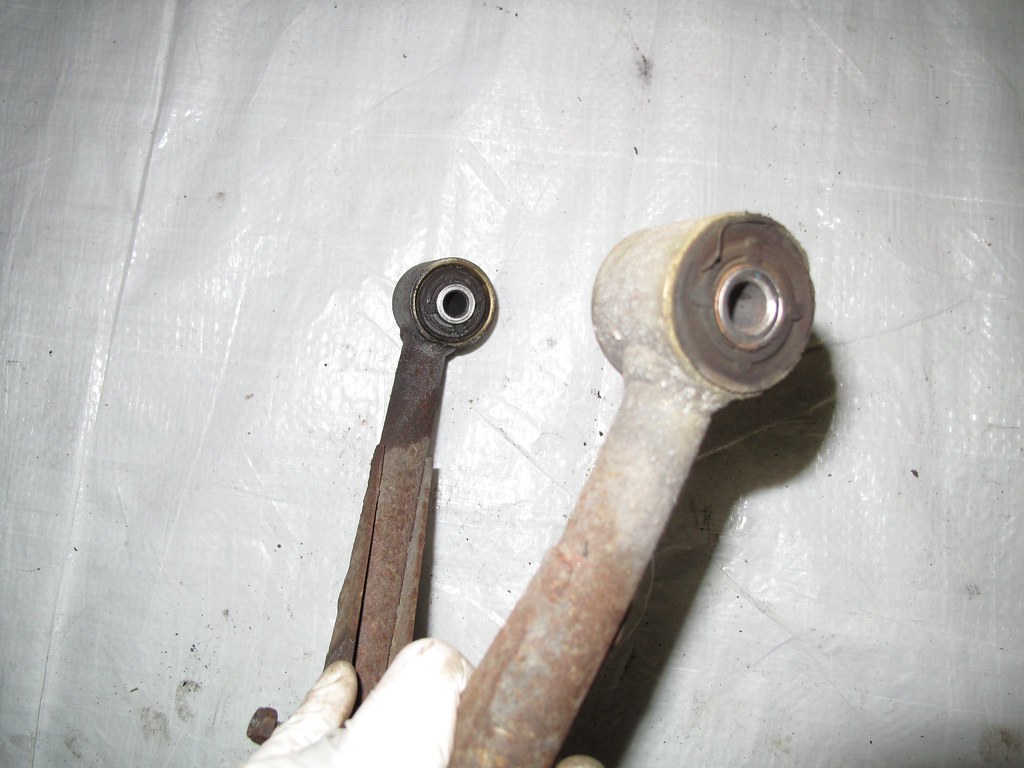 And the lower wishbone 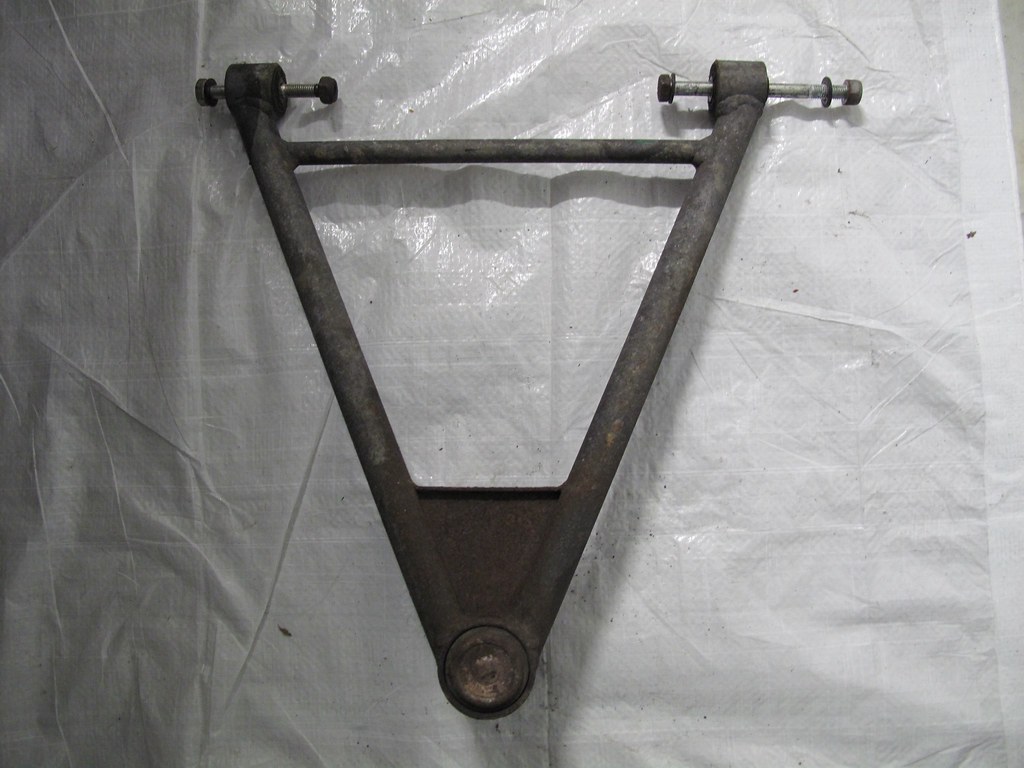 So that’s on corner off the car.....all the parts went into one box so I don’t mix them up.
I’ve colour tie clipped the parts that will go for sandblasting so they don’t get mixed up with the offside parts (not sure if the tie will survive the process though) 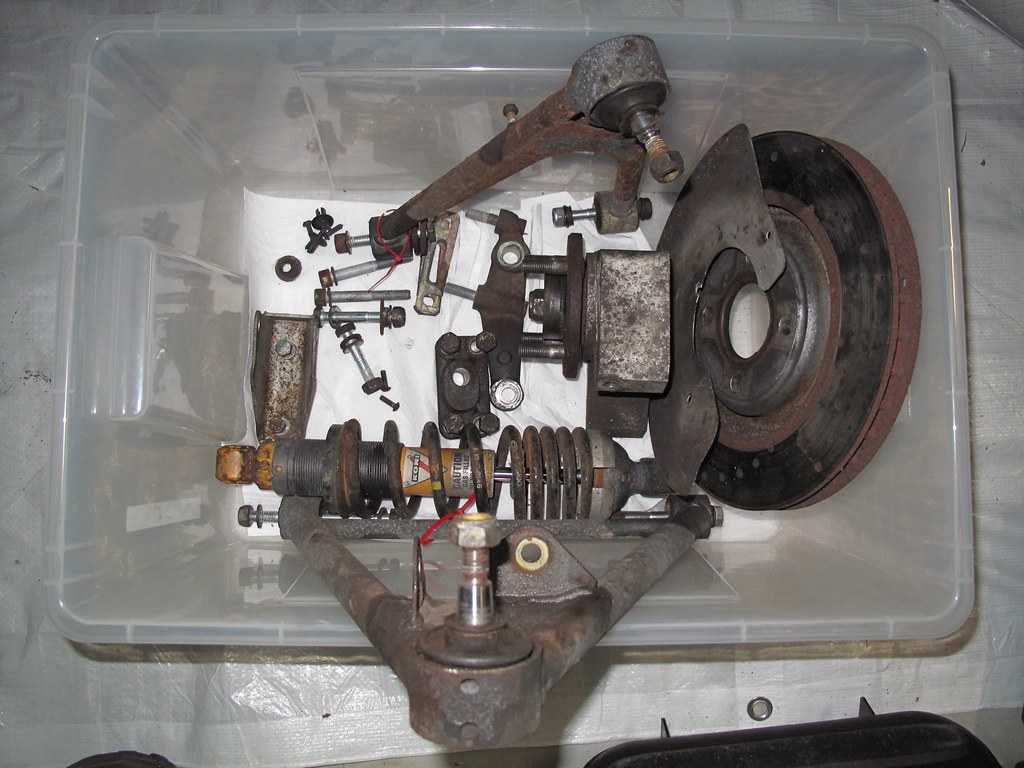 I struggled earlier to get the front under tray off but finally after finishing the wishbones managed to do it.
This will give easier access to the anti-roll bar support brackets.

Here shows the screws loosened off, 3 at the back, 2 either side and 5 along the front.
The tray needed pushing forward then back to be lowered. 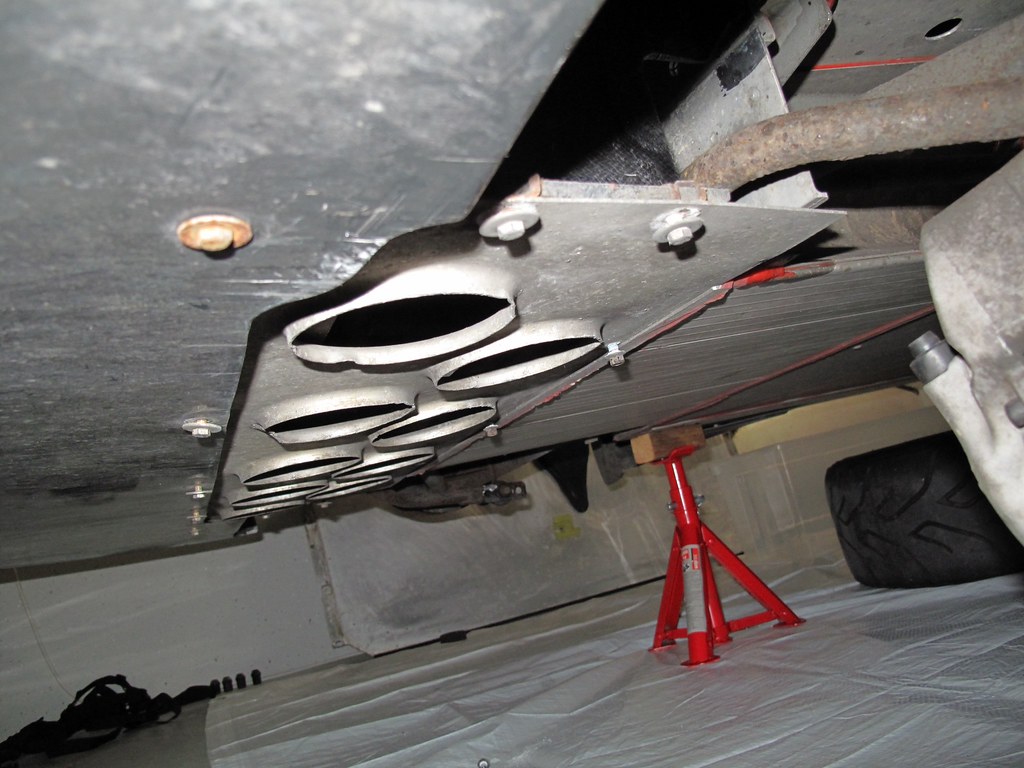 Before starting yesterday (day 4) I discovered a really good guide here: http://www.tadts.com/instructions/suspe ... 00018.html
I will edit my first post to include this link so this helps anyone in future.

Now I will do the off side now (hopefully quicker)

is that panel on the wrong way around, thought the holes projected inwards
Top

is that panel on the wrong way around, thought the holes projected inwards

I'll have a look later, i cant really remember the holes pointing in a particular direction.
Top

Do consider the epoxy mastic,as suggested. Personally, I preffer it to Por as its just less faffy to use.

You might want to consider that ARB, you'll have some lovely shiney wishbones then a rusty arb.
Top
Post Reply
52 posts